We barely made it to the bus station on time after rushing through our 8 AM breakfast and catching a cab at quarter to nine. Our bus left promptly at 9:00 and we were on our way to Jerusalem.

Although we had assigned seats and were under the impression that the bus was chartered, it still made stops on the way to Jerusalem to pick up more passengers. People were standing in the aisles and sitting on each other’s laps; we were completely full, yet the bus kept stopping for more passengers. It was kind of weird.

Jerusalem was much more of what I expected Israel to be like, at first glance. People dress much more conservatively here than they do at Eilat. Obviously there are more Hasidic Jews here. Many boys and men wear the payot, the yarmulke, and the tzitzit. Some wear long coats and other traditional hats as well. Most women are dressed conservatively, with skirts hitting their mid-calf and shirtsleeves past the elbow. Many women cover their hair, as Jewish law requires that married women do so. Almost everyone here dresses modestly, even the crosswalk signs. 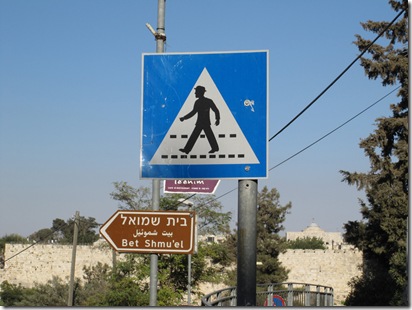 This was a welcome change from the dress-code at Eilat. We’ve become rather accustomed to being surrounded by modesty and it was quite shocking to see so much bare skin.

We only had to stop once to let police on the bus before entering Jerusalem; no doubt they were looking for Palestinians. It was slightly unnerving to have them walking up and down the aisle with their big guns—their guns here are even bigger (and a whole lot newer) than the guns the police carry around in Egypt. Arriving in the city, though, was amazing.

It’s always a bit of a thrill for me when I see things with my own eyes—things that I learned about in school or read about in books. Jerusalem is a historically rich city—so much has happened here scripturally and politically; it’s no wonder we are so excited to be here.

Getting to our apartment was a bit of a challenge, but once we made it we were good to go. It’s in a nice location, not too far of a walk from the Old City, albeit up a hill…so coming home at the end of the day is always a little tragic for me. It’s a beautiful apartment, though, and we quickly settled in and ran to the store for a few groceries.

Things are so much more expensive here than in Egypt. We’re used to buying spaghetti noodles for a couple of pounds per package—well under a dollar, at any rate. Here most packages were 15 NIS, which is like 4 USD! The cheapest package we could find was 6 NIS, which is still over a dollar, but not too expensive, I guess. We’re spoiled in Egypt when it comes to food prices, although most of the food tastes terrible. I guess there’s a price to be paid for everything. 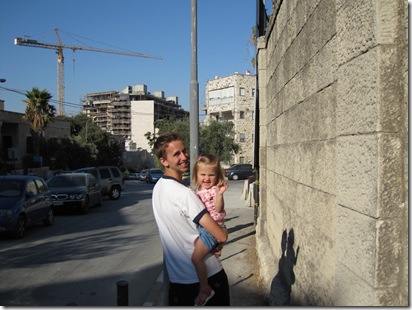 When we were completely settled we went to explore the Old City. Rachel quickly turned our Jerusalem adventure into a Dora adventure by asking in a singsong Dora fashion, clapping her hands, and yelling enthusiastically,

She’s been singing that all week long. She adores the Old City.

We were so late getting there the first day that not a whole lot was open. We headed to the Church of the Holy Sepulchre, which popular tradition holds to be the place of Christ’s crucifixion, burial, and resurrection. 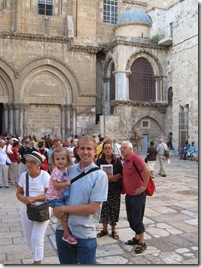 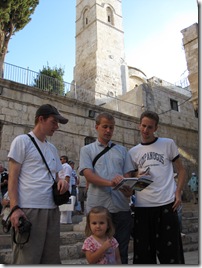 Unfortunately, it was difficult for us to find any reverence in this church at all. It was teeming with people, making it hot, crowded, and very loud. Poor Rachel was in danger of being trampled to death by tourist groups at every turn. It was a very beautiful of church, though, containing a lot of Christian relics. 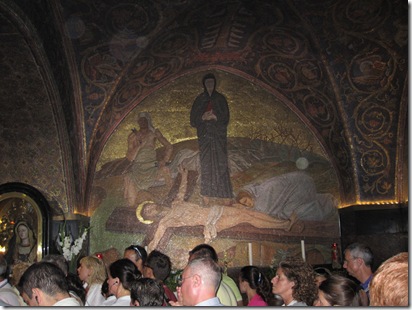 It’s always interesting for me to observe how Catholic and Orthodox people treat relics and things. They are Christians and we are Christians, but we worship in such different ways. There is a flat stone at the entrance of the church called the Stone of Unction, which is apparently where Christ’s body was prepared for burial in the tomb. People were lying on it, rubbing crosses and rosaries and hats and scarves and other trinkets on it, placing their face on it. It was…interesting. 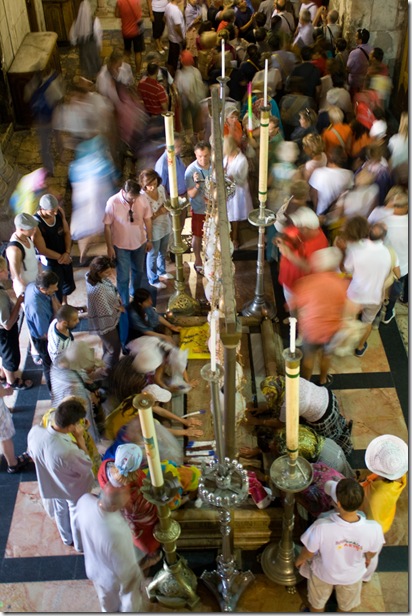 We touched it, too, but it was clear that the stone did not evoke the same emotions in us that it did in the people surrounding us. Patrick, the funny boy who would later put on a yarmulke and approach the Western Wall like he had done it every day of his life, was apprehensive to touch the stone because he didn’t want to offend anyone.

“You’re Christian,” I told him, “Why would it offend anyone?”

We don’t really do relics…but it is interesting still to see things believed to be from Christ’s time, even though the stone dates from 1810…which is well after Christ’s time. All it really seemed to be to us was a slab of stone. I guess I just don’t understand these things very well. Still, it was interesting to see the kind of thing Christ’s body would have been prepared on. 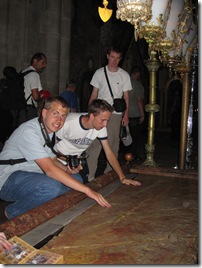 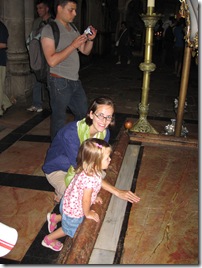 Christ’s tomb is also located in the church, at least the tomb that the Catholics and Orthodox believe to be Christ’s tomb. We’re more Garden Tomb people, personally. We didn’t want to wait in line to go into Christ’s tomb here—we would have been in line for hours, and Rachel is afraid of tombs, anyway, she informed us. She’s always telling us all about people who fell in tombs, or, as she says, “toons.” 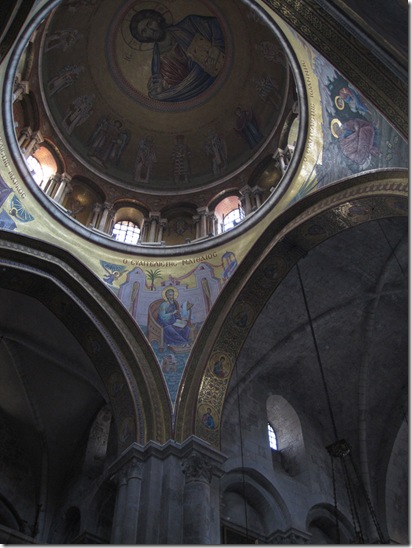 We went down into what she considered to be a tomb, anyway. Past the Chapel of Adam, which is underneath the chapel, and directly under Golgotha, actually (the chapel is built against the Rock of Golgotha and is where many believe Adam is buried), is St. Helena’s Chapel and then the Chapel of Inventio Crucis, where St. Helena is said to have found the True Cross. 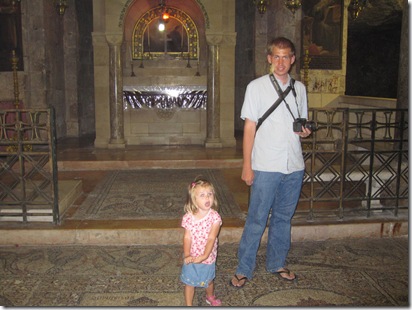 After Rachel started adding her screams to the cacophony in the church, we decided it was time to move on. She calmed down once we were in the courtyard. 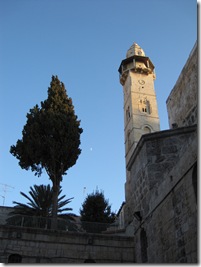 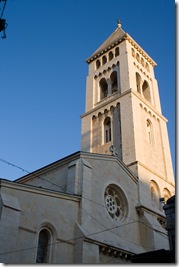 We headed to Via Dolorosa and did the stations backwards; since stations 10-14 are at the Church of the Holy Sepulchre we just made our way to the beginning from there. About half of Via Dolorosa is in the Muslim quarter, so as we made our way (backwards) through the stations, more and more Ramadan decorations started cropping up. 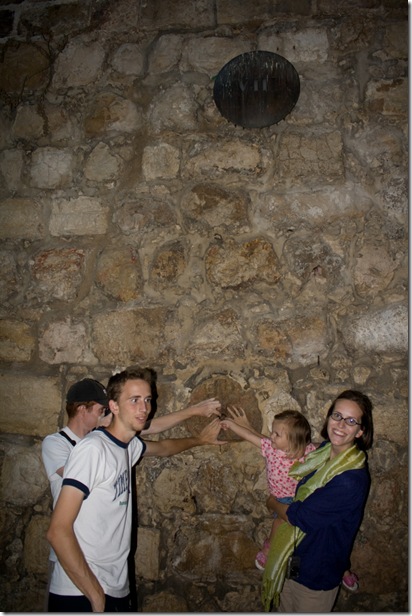 While we were walking we heard a tremendous *BOOM!* and almost started looking for a bomb shelter (the paranoia in Israel is quite contagious) but when the Muslims surrounding us started celebrating and eating, we realized that it was only a cannon to officially declare the start of iftar, in addition to the adhan.

We’ve never heard a cannon to start iftar before since Cairo doesn’t use one, so that was kind of exciting. 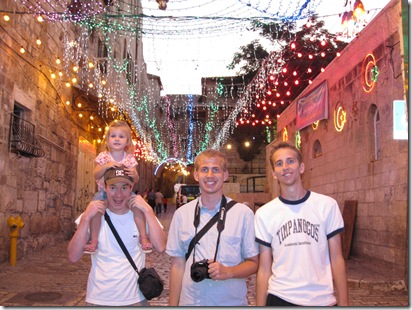 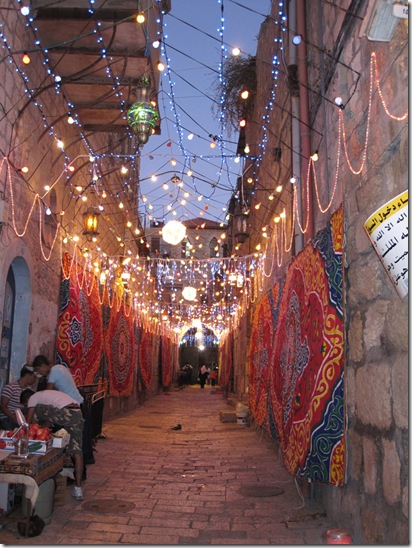 The decorations started petering out when we reached the Lion’s Gate, which is where stations 1 and 2 mark the place of Pilate’s judgment of Christ. The Ecce Homo church/archway is there. 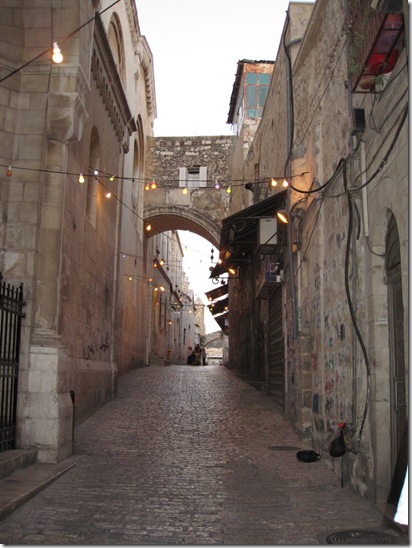 When we got there, though, there wasn’t anything else for us to do but turn back and retrace our steps, following the stations in the right order this time. Not that we know what all the stations are off the top of our heads; Andrew was by far the most well-versed in the stations of the cross from all the time he spent in Rome. We eventually did find a sign that listed them all and although some of them are based on tradition and not scripture, it was neat to see where Christ would have been carrying the cross and walk the path he walked. 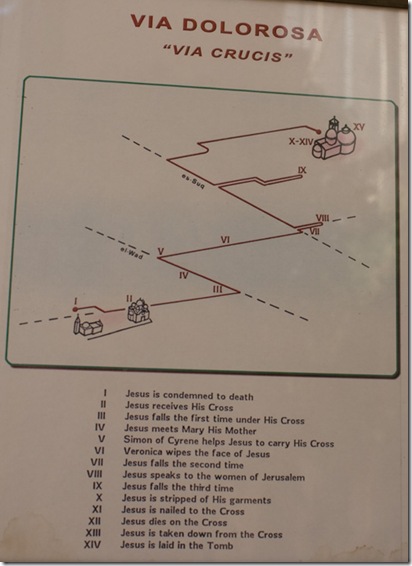 Along our way we saw a UN car. That has nothing to do with Via Dolorosa at all, but we thought it was kind of cool, anyway. 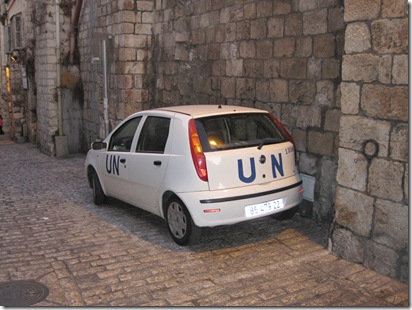 Having not planned out our day very well, the only other thing we could think of that would be guaranteed to be open was the Western Wall, so we made our way over there.

The Western Wall is made up of the remaining stones of King Herod’s temple, the second temple to be built on that site. It’s just below the Temple Mount, where the Dome of the Rock currently stands and where a third temple will be built before the coming of Christ.

It’s a very sacred site to Jews, who approach the wall to pray, stuffing scrolls of paper with their prayers written on them into cracks in the wall. On Shabbot they wail, which is why it’s also known as the Wailing Wall. I think we’ve walked past this every single day we’ve been here…so we heard them wailing, we’ve seen them stuff their papers in the wall, and we’ve heard the call of the shofar. We even approached the wall ourselves, but that’s another story for another day. We couldn’t go the first time because the boys needed kappas and they hadn’t purchased any at that point. 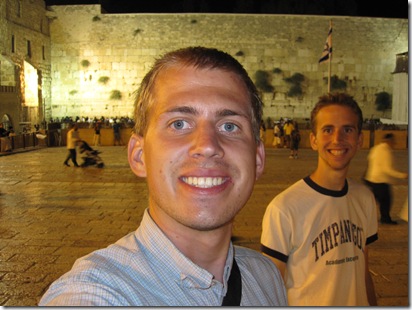 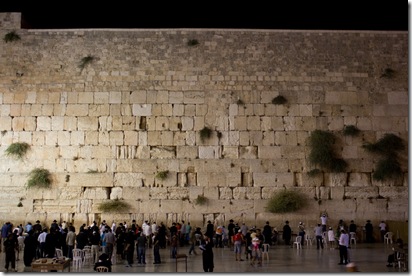 It was obviously getting rather late by this time and we were all bushed, so we headed back to our apartment for yet another restless night with Rachel in our bed. Sleeping with a two-year-old is no easy task. I feel like I haven’t gotten a good night’s rest since leaving on this trip!