Our next day in Eilat was much better than the first. It’s amazing what a good night’s rest will do for your perspective…although “good night’s rest” is a relative term when there’s a two-year-old in the bed with you.

Andrew, Patrick, and Joseph got up and headed off to Jordan to visit Petra while Rachel and I slept in as late as we could without missing breakfast (which was a wonderful complimentary smorgasbord of pancakes, fruits, and everything else imaginable). We ate three platefuls: one for me, one for Rachel, one for Miriam. Or something like that.

Then Rachel and I left on an adventure to find the Egged bus station to buy tickets to go to Jerusalem. Finding the station was easy, figuring out how to buy tickets was easy. Paying for the tickets, though, was a little tougher than I imagined. For some reason very few places in Eilat seemed to accept Visa card; everything was either MasterCard or American Express.

Eventually I did find an ATM that accepted Visa, but the English side of things was broken which meant that I had to figure things out in Hebrew. I don’t exactly speak Hebrew so I enlisted the help of a guard to get out some money.

With that in hand, Rachel and I made our way back to the bus station to purchase our tickets. It took us 2.5 hours when all was said and done! I was happy to simply have gotten tickets at all since I kept seeing signs that said that any tickets for trips outside of the city should be purchased three days in advance…and we wanted to leave the next morning. Apparently that sign was only joking.

Then I presented our options to Rachel. We could go visit the dolphins or we could go to the aquarium.

“Dolphins are a little bit scary,” Rachel told me hesitantly.

“So you want to go to the aquarium instead?”

“No. I don’t want ‘quarium. I wanna pet the dolphins!”

We hopped in a cab and sped off to Dolphin Reef, which is almost in Egypt. I didn’t think about how far away it was from things until we were already hopelessly far away from the city. I was a little worried about how we would get back into town but pushed that thought from my mind and bought a ticket anyway.

Rachel and I headed off to the dolphin docks right away. They’re floating docks so they moved a lot, which made Rachel nervous until she decided they were like being on a boat. Then she was fine with them. Taking pictures was still tricky for me since I felt like I had to hold Rachel’s hand the whole time. It was neat to be so close to the dolphins, though. 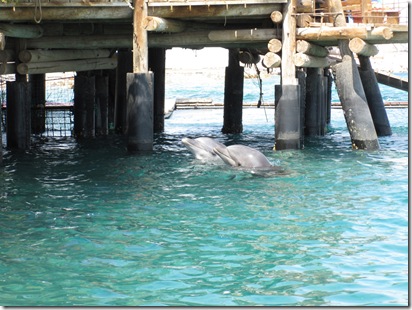 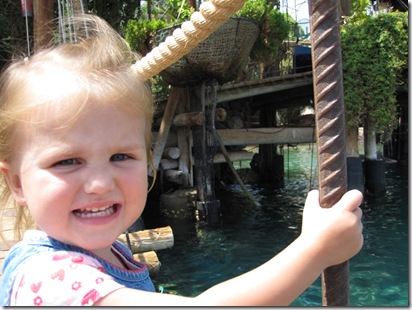 We were allowed to put our hands and/or feet in the water and let the dolphins swim up to them. Rachel and I had a dolphin swim right under our feet while we were splashing. It came so close we could have touched it, but we didn’t. 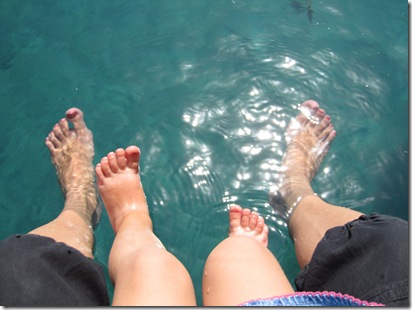 We got to watch the dolphins being fed. I explained to Rachel that the buckets were full of fish and the trainers (or whatever they were) were feeding the fish. For the rest of the afternoon, whenever Rachel wanted the dolphins to come closer she’d tell me that we needed to find them some food, because food makes them come closer. 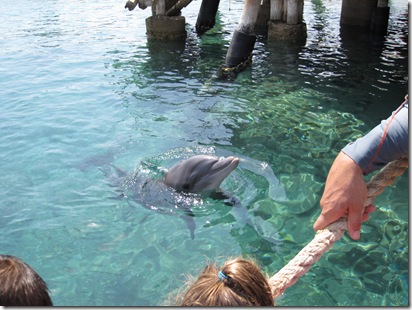 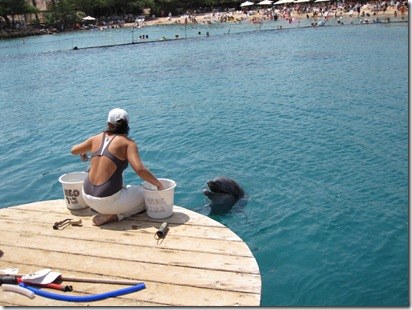 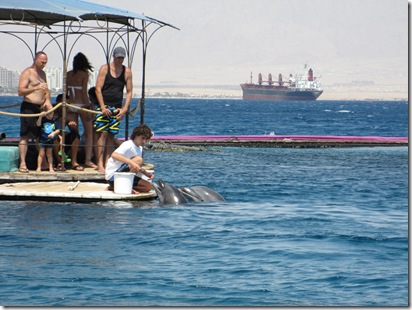 Another one of Rachel’s favorite parts was looking down at the reef and all the tropical fish. She decided that the striped ones were Nemos (even though they aren’t) and kept asking where Dory was. 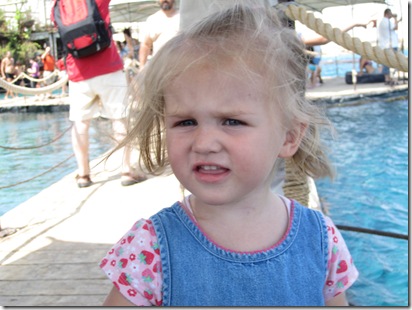 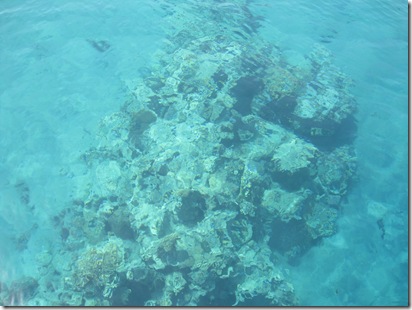 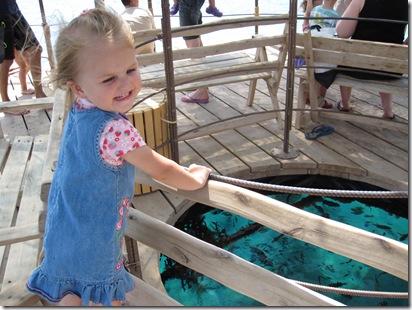 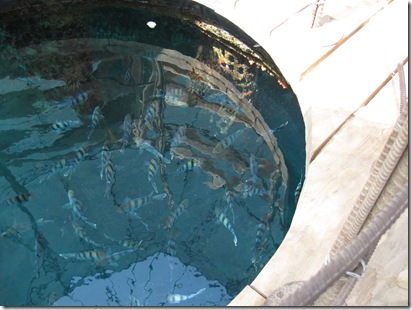 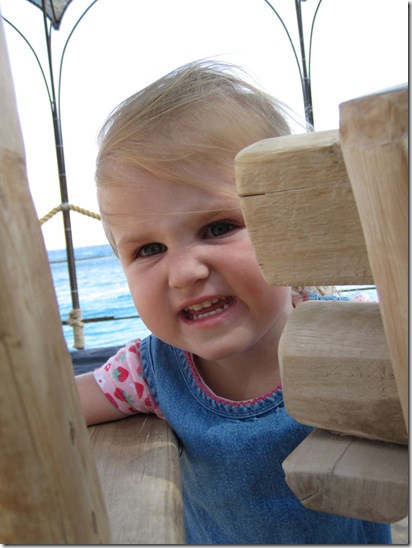 From the dock, Rachel noticed that there was a beach that people were swimming at. I wish the guidebook would have told us that, because I didn’t bring our swimsuits. Besides the snorkeling and scuba diving, which I knew Rachel and I wouldn’t be doing, the book made everything else sound like dry-land activities.

I tucked Rachel’s jumper up so that she could wade in the water a little bit, but we eventually decided to just take it off completely. Rachel was frustrated because I couldn’t go into the water very far with her. I told her I didn’t want to get my clothes wet, but I cinched my pants up past my knees so I could go in a little ways with her.

Always the problem solver, Rachel came up with a suggestion,

Good suggestion, but no.

She also didn’t like how rocky the beach was. It was rather rocky and there were sea urchins around. I was glad when she asked to go see the dolphins again. 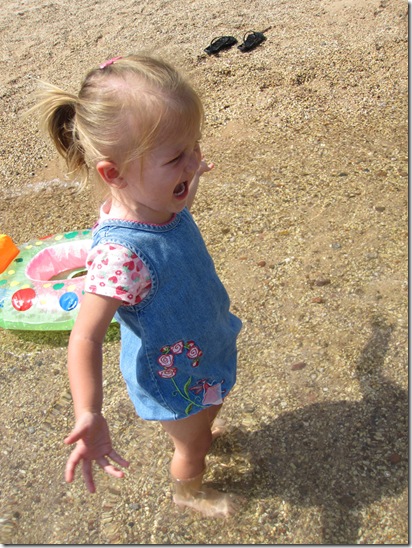 She was so tired that she could hardly keep her head up to look for dolphins, so we decided to call it a day. 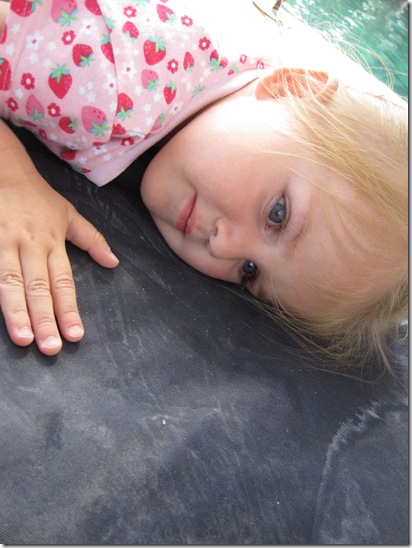 But on the way we spotted an albino peacock so we had to stop and look at it, which lead us to several other peacocks, including a little baby one, and some pretty trees with pink flowers. 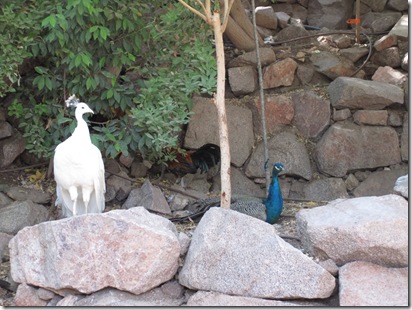 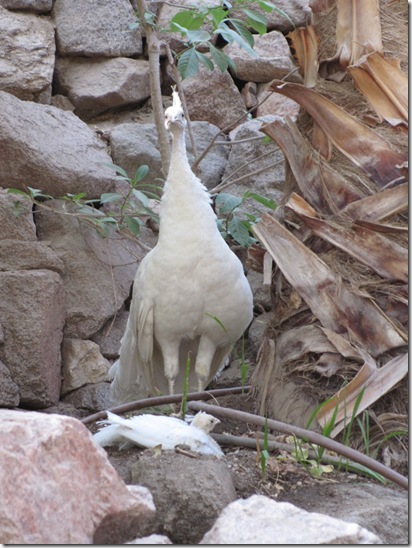 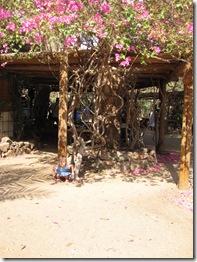 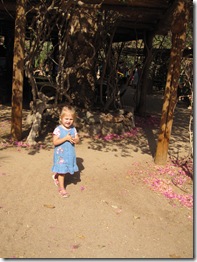 Once we were out of the park, however, our cheery moods dissolved. We were hungry and tired and stranded on a highway. Our choices were to continue standing there, hoping that an empty taxi would drive by…or we could start walking. Rachel wasn’t in a mood to walk and I wasn’t in the mood to carry her, so that left us with the standing-there option. We stood there for a long time, probably over a half hour, while taxi cab after taxi cab drove toward the city, always full of people it had just picked up from the border.

Seriously, we were probably closer to Taba than Eilat. Our situation looked pretty grim. I was trying to stay calm, but Rachel could tell that I was on the verge of tears. My voice gets squeaky when I’m upset.

“Why’s Mommy crying?” she asked me.

“Because we’re stuck here and I don’t know how to get us home,” I told her.

We said a little prayer on the side of the highway and then watched for our miracle, because I expect things like that.

A few taxis drove by without noticing us, but then, finally, a taxi driver going toward the border saw us and honked. He bounced his hand up and down with his fingers bunched up and pointing to the sky. That’s the gesture for “just wait.”

So we waited. Ten minutes later he pulled up along side of us, having dropped off his previous passengers at the border. He was so nice and patient while we attempted to explain where our hostel was. He didn’t even rip us off or anything, just dropped us off, bid us shalom, and went on his way—completely unaware that he was the answer to a somewhat desperate prayer.

The boys weren’t back when we got to the hotel room so we watched Dora together, in Hebrew again, and ate snacks. Then we changed into our swimsuits and left a note telling Daddy that we were going to the beach and asking him to not go eat dinner without us. 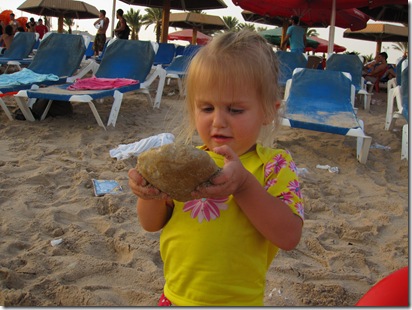 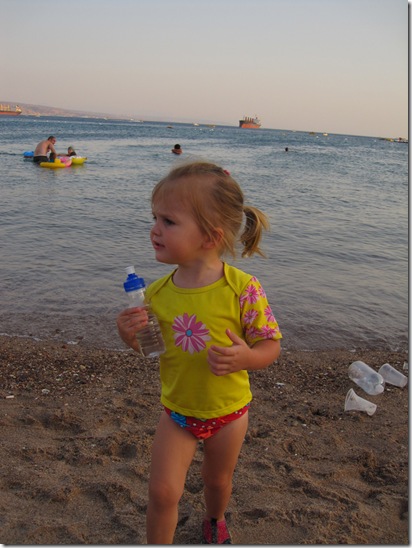 We walked back to our hotel at sunset and while we were slowly making our way to our room, we heard Daddy’s voice. We turned around, and there he was! Rachel ran into his tired, sunburned arms and he twirled her in the air and carried her the rest of the way to our room where she immediately got very hyper playing on Uncle Patrick’s bunk bed. I was so happy to have other people around to play with her again! 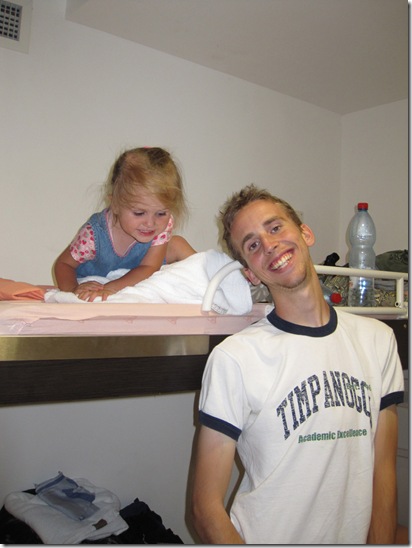 We went out to dinner at the pizza place next to our hostel, Meter Pizza, and then rushed home to pack up our stuff so that we could be ready to bus to Jerusalem the next morning. After my tale of the fabulous breakfast Rachel and I had had that morning, the boys didn’t want to miss out on breakfast before heading off on a long bus ride, thus the rush to be ready the night before.