This morning when Andrew was leaving for the day, we gave each other a hug.

Then Andrew kissed me.

Andrew scooped her up into her arms and she gave him a great big kiss on the lips. Then she lunged into me and gave me a big hug and kiss, too.

A few days ago she told us no kissing and Andrew said, "Oh, yeah!? Watch this!" before kissing me again. Since then affection has been a sort of a competition to Rachel, although I'm not sure where the marriage thing popped up. She came up with that all on her own.

Her comprehension and/or ability to parrot things never ceases to amaze me. This morning she told me that Daddy was "goin'a go research downtown" and that she wanted to go downtown, too. The only reason she would know that is because yesterday we had a play date with her friend Elijah and I told Rachel (the mom) and John that Andrew was researching at the Special Collections Library, which happens to be downtown and not at the new campus.

He went in again today. I'm just impressed she remembered details like "research" and "downtown."

While Daddy was gone, Rachel and I did the dishes--I washed, Rachel rinsed and put the dishes in the rack to dry, which means putting away the dry dishes will be like deactivating a booby trap. Then I drew some pictures for Rachel to color with the new pens Naanii brought over from America so that she could colour while I worked on Arabic for a little while. And then Rachel requested to paint.

"I want to paint! I need water! And a hairbrush!" she told me, forgetting about the two other essentials: paper and paint.

Yesterday Elijah tried to get her interested in painting, but she was riding his tricycle, see, and couldn't be separated from that. It's hard to paint while perched on a tricycle, but she observed the process well enough and made some fabulous paintings today. 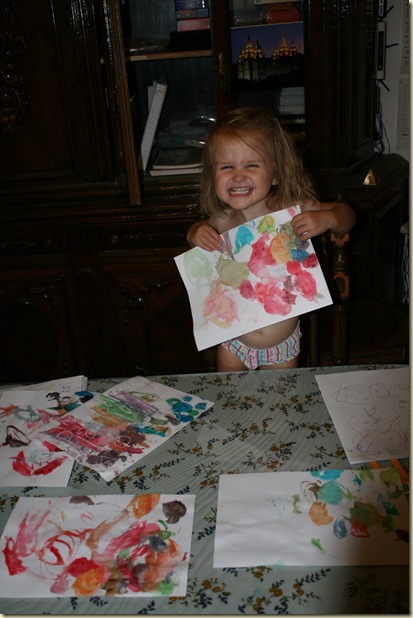 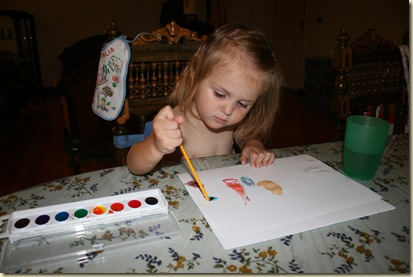 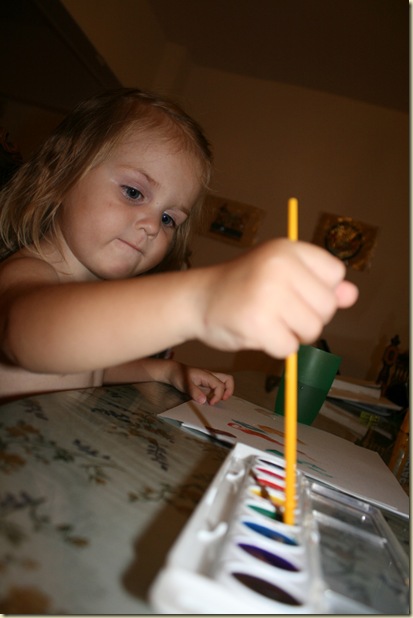 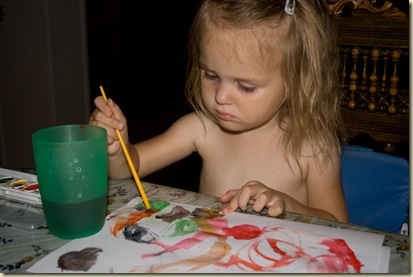 Her hair is kind of crazy because it was in French braids yesterday. We took them out this morning since one had come undone while she was sleeping; she wouldn’t even let me brush her hair today because she insisted that brushing it would ruin it. It took me forever just to convince her to let me put a barrette in to keep her hair out of her eyes.

We had a surprisingly happy day while Daddy was gone, which I wasn’t expecting. Rachel refused to go to sleep last night and ended up falling asleep, finally, at 10:45 PM (long after she was sent to bed). She then woke up at 7:00 AM and ran into our room requesting, of all things, ice cream. With that amount of sleep I was definitely expecting a grumpy day but we actually got along quite well, which was nice.