The Pyramids with Naanii

“Let’s just hang out around here today and go to the pyramids on Sunday. I. can’t. move.” I whispered to Andrew, who gave me a kiss and promised me we could do anything I wanted because he’s one of those wonderful, obliging husbands. Or he just doesn't dare cross me when I'm pregnant. 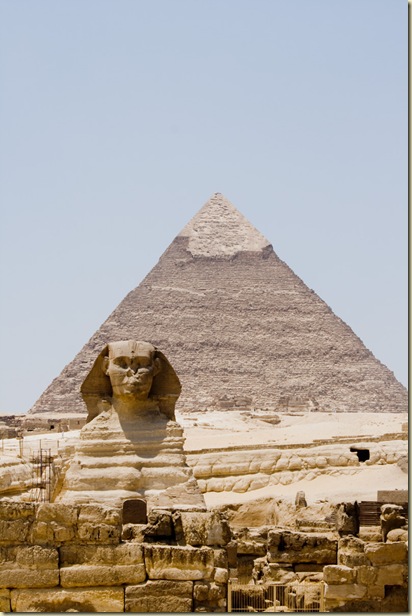 It was like waking up at 8:00 in the morning was going to kill me. Ironically, I was feeling much better strep-wise; I was just tired from the day before because we did a ton yesterday.

So we got up and announced that we would be staying home, unless I started feeling better. I showered, and we had breakfast, and we relaxed. And then I said,

“Actually, I feel pretty good now. Anyone still want to go to the pyramids?”

We left for the pyramids in the middle of the day. Potentially this was a very bad idea because it’s usually hotter out in Giza by the pyramids. The pyramids are right on the edge of the city—there are buildings leading right up to the gate of the pyramid complex—but beyond the pyramids is nothing but sand, sand, and more hot sand.

My mom was a little wary about going out to the pyramids so late in the day; we all had our doubts, I’m sure, especially when we stepped out from the “cool” stairwell into the blazing hot late-morning street.

It ended up being a perfect day and time to go, though. There was a nice cool breeze flirting around the pyramids, which was very refreshing. It wasn’t a strong enough breeze to whip sand into our faces or make our hair go too crazy, just enough to cool us off. We were completely expecting it to be several degrees hotter out there than in Maadi, where we’re kept shaded by trees. It might have been hotter, but the temperature was tolerable and the breeze only made it that more pleasant.

Still, we were happy to go sit in a restaurant, lunching for an hour or so, in air conditioned bliss before getting in a hot taxi to come home.

I’m glad that I started feeling better, because Rachel has this amazing memory. She’s not one of those out-of-sight-out-of-mind children and can be quite difficult to distract. You’d think after sleeping a whole night she’d forget that we told her we’d be visiting the pyramids and sphinx the next day. But no. Not her. She remembered. Of course.

When we actually got to the pyramids, though, and she saw camels and remembered how absolutely huge, grotesque, and scary they are, and how she once peed her pants in fright (literally) while on a camel, she quickly got over that idea and spent the whole time scream/crying/wailing, 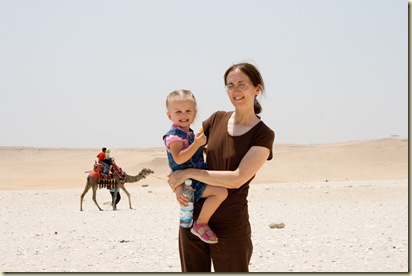 We didn’t do any camel rides today, which Naanii was fine with. She rode an elephant once at the San Diego Zoo (or somewhere); I never knew that. Camels are nothing compared to elephants, I guess.

*Sigh.* I want to ride an elephant one day.

Naanii was excited to touch the pyramids, though, and to get to sit on some of the stones. Rachel was insisting that, not only was she petrified of camels, she was also deathly afraid of pyramids, so she had a hard time approaching them. 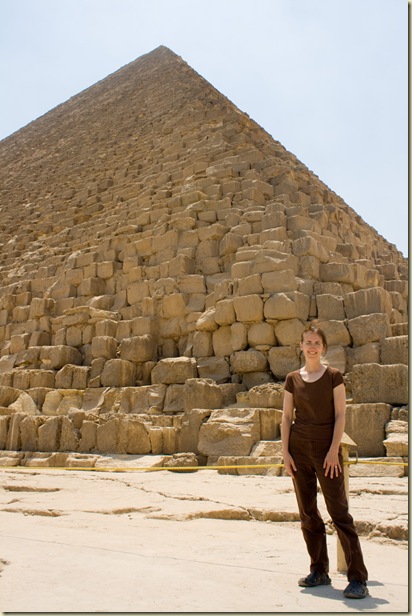 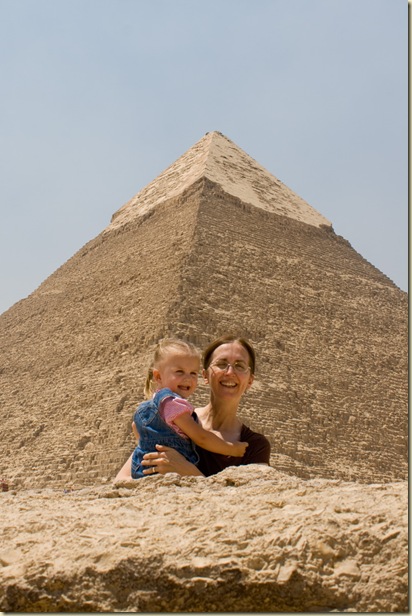 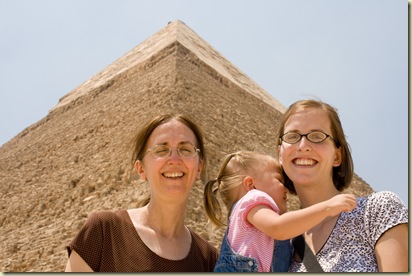 Rachel was excited to see this donkey, for some reason. She used to be afraid of donkeys, but she was fine going up to this one (although, not too close). She said he was Eeyore and started making donkey noises at him. Or at least, she was saying “hee-haw.” It’s a good thing the donkey didn’t bray back at her or he probably would have given her nightmares for a week! 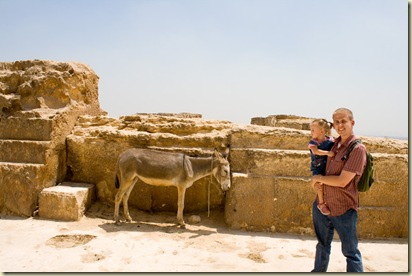 We like to walk to the farther pyramids because you get more of a personal experience with the pyramids. I’m not sure why we feel we need personal, one-on-one time with these big slabs of granite, but we do. I guess we just like to get away from the crowds at Kufru’s pyramid since that’s where tour buses dump their thronging mobs of picture takers. We spend most of our time at Khafre’s (the one “in front of” the sphinx) and Menkaure’s (the smallest one) pyramids. 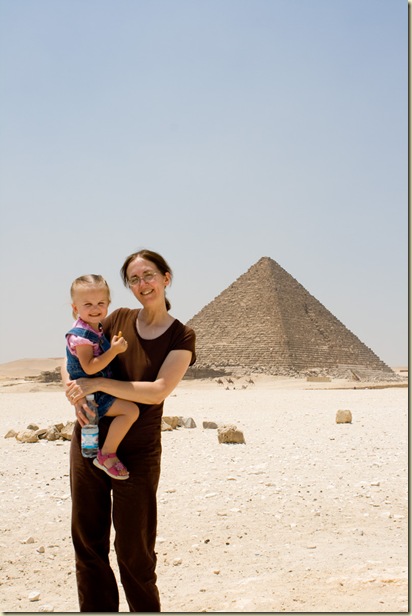 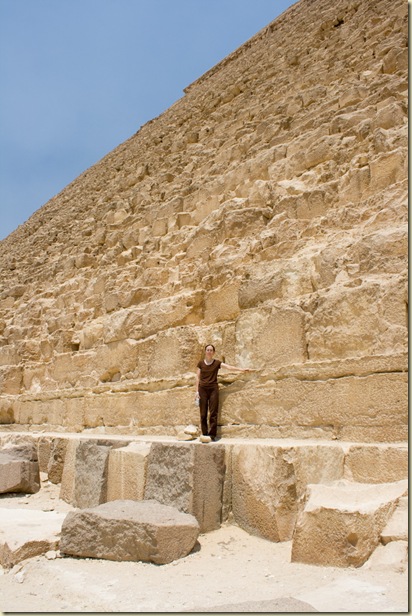 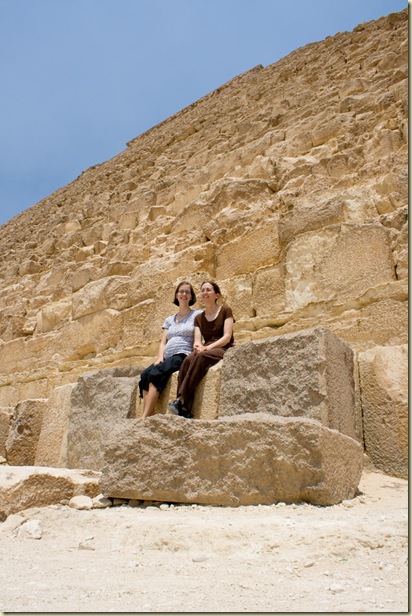 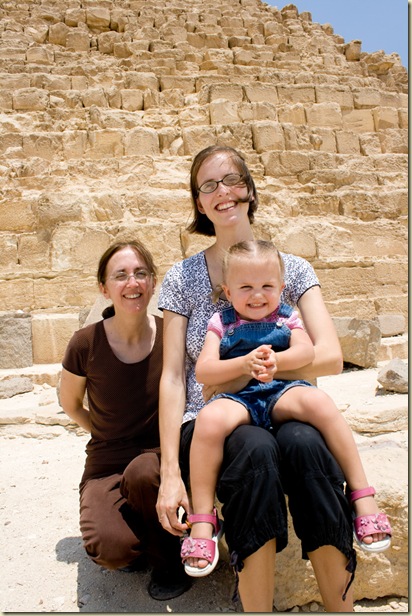 Even with the cool breeze, we were finished with the pyramids after an hour or so, so we started the walk to the Sphinx. On the way, Rachel and Andrew had us stop to take their picture standing on this rock in front of Khafre’s pyramid. Rachel dubbed it “Camel Rock.”

She’s been watching a bit of The Land Before Time recently and thinks that everything needs a name, often a very obvious, descriptive name. Like Camel Rock. Why? Because there were camels all around while she was naming it, of course. 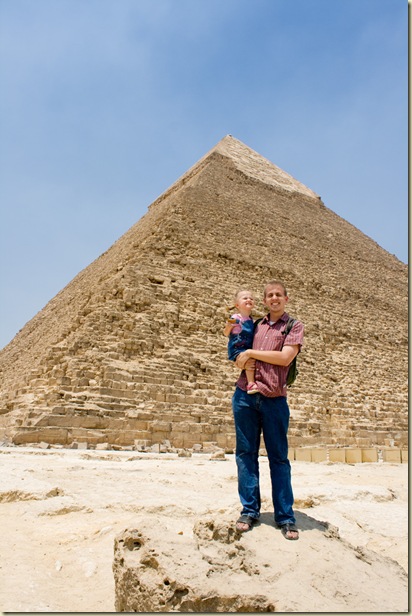 Mom was at first very willing to “kiss” the Sphinx…until I kept messing up the shot and made her stand there for a few minutes until I got a picture that turned out alright. I probably took 5 or 6 pictures…she started to get a little embarrassed since so many people were walking by. 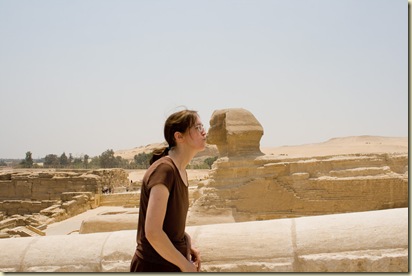 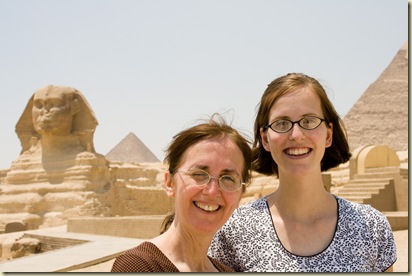 When we were finished we crossed the street and went to Pizza Hut for lunch (Andrew’s pick; no surprises there). We sat by a window looking over the pyramid complex. From our high vantage point, we also got to see a funeral procession walk by. Also we saw a 10-year-old waiter stick a ketchup bottle up his nose while carrying it over to a customer and later saw him trip down the stairs carrying two trays full of empty wrappers. We were very glad that we chose to eat at Pizza Hut and not KFC since this little boy was employed by KFC. I realize that Egypt doesn't really have labor laws to prohibit a 10-year-old from working, but I'm pretty sure KFC does. Who knows?


Then we had to catch a taxi home, which was a little tricky since no one wanted to take us for the price we wanted and everyone we found who said they were taxi drivers didn’t actually own a taxi. Eventually we did find a driver and had a smooth and air conditioned ride home…in a black and white taxi. That never happens, but the driver had a newer car that was actually equipped with A/C and he stopped to buy some delicious looking mangoes on the side of the road. I guess he didn’t want them to spoil, so he asked us to roll up the windows and cranked on the A/C. It was a very pleasant ride.

When we got home we all took long afternoon naps and lived happily ever after!