Egypt has holidays for just about everything. We recently had Taba Liberation Day, back in March. What’s ironic about that is that Taba is on the Sinai Peninsula…so basically they’re celebrating the same thing twice.

If that’s fair I think the States should have a separate holiday commemorating each time a state was admitted to the Union.

I don’t really mind that Egypt had a holiday today, truthfully. It meant that Andrew didn’t have class this evening so we spent a nice, quiet day together as a family. The city was deathly quiet. I have no idea where people go on holidays like this but the city was pretty much deserted. Actually, I do have some ideas—the zoo, for one, or the coast.

Personally, we tried to visit al-Manyal Palace. It’s Miriam 6 month birthday, see, and she was born on Manyal Island so we thought it was fitting.

We took the metro to Sayyeda Zeinab and crossed over the Nile on foot. While waiting for the metro to come we watched some boys playing soccer in the street. These boys were lucky because they actually had a ball. I’ve seen kids play soccer using crushed pop cans. It’s a racket (in more than one way). 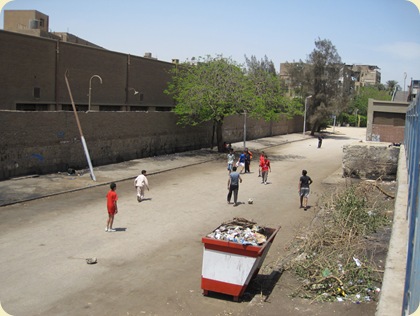 Rachel had been off on her own watching the boys play when a train started coming. She ran toward me as fast as she could, then crashed into my legs.

“That train was almost going as fast as me!” she panted, feigning an asthma attack, “But I beat it!”

She can be so funny.

The palace is right by the Qasr al-Aini Hospital, which is really hard to miss. It’s huge and the architecture is striking. 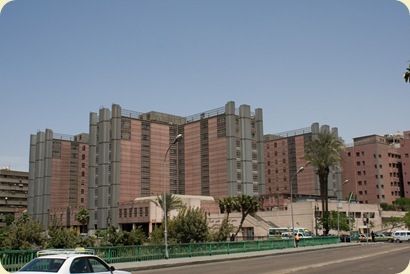 The palace, itself, is also pretty obvious and imposing. Unfortunately, it’s also closed. It’s been closed basically for forever and I don’t see it opening any time in the near future. Sad day.

There is a garden over-looking the Nile just behind the al-Manyal Palace so we went there instead to enjoy the shade and take some pictures. Like most gardens it cost a couple of pounds to get inside. We walked along the palace wall and took pictures, wishing we could get inside to look at the gardens, which are supposed to be spectacular. When we started choking on the construction dust we wandered along the Nile some more. 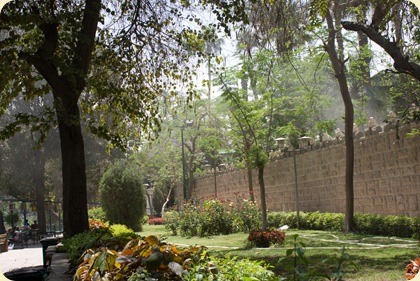 It was tempting to get in. I don’t know why; this is the first time it’s ever been an issue for us. Perhaps it was because we were standing right on the bank with the water nearly lapping our feet. Luckily we just watched an episode of House where the diagnosis was bilharzia, which is pretty common in Egypt since the Nile was dammed up, so we were sure to stay dry. 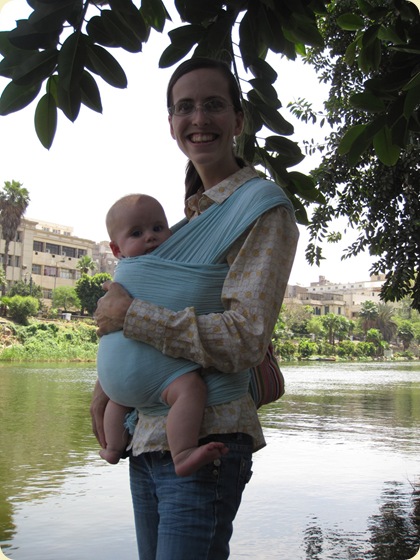 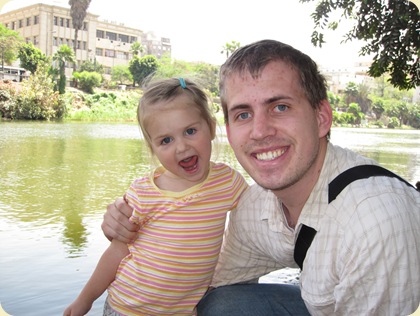 We watched some kids fish for a while but only ever saw them catch garbage. Wondering if there actually was anything to catch, we kept looking for fish. We finally saw some, but I don’t think I would recommend eating anything caught from the Nile. At least not in Cairo; by the time the river makes it up this far it’s so polluted and icky and full of schistosome-infected snails. 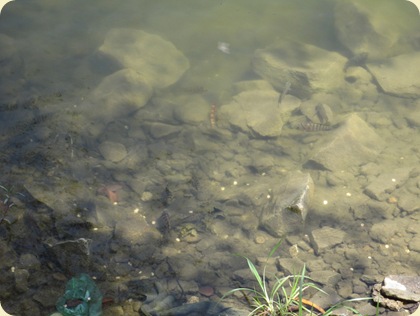 Still, it’s peaceful to be by the water. 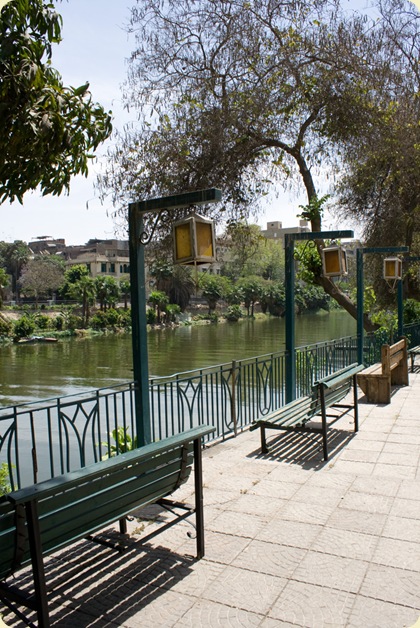 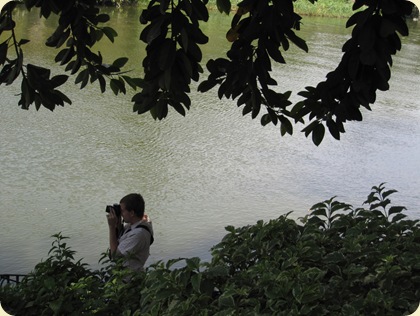 Sometimes it is still funny to me to see the Nile in the middle of Cairo. When I think of the Nile I think ancient—of Moses and bulrushes, hippos and crocodiles—but here it is, today, choking in a jungle of cement, running alongside buses and taxis. I have the same bizarre feeling about the pyramids—those…right here…in the city? Some things, I suppose, like rivers and pyramids, transcend time. 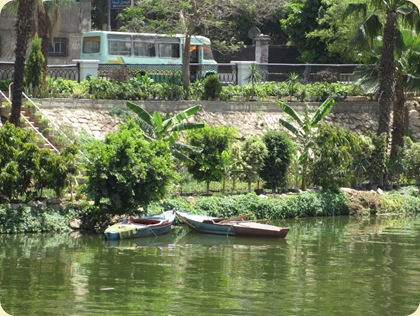 We took a lot of pictures of Miriam since it was her six month birthday; Rachel wanted some pictures taken of her, too, of course. 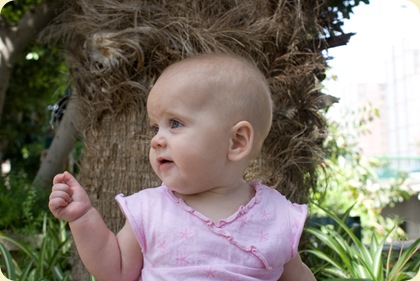 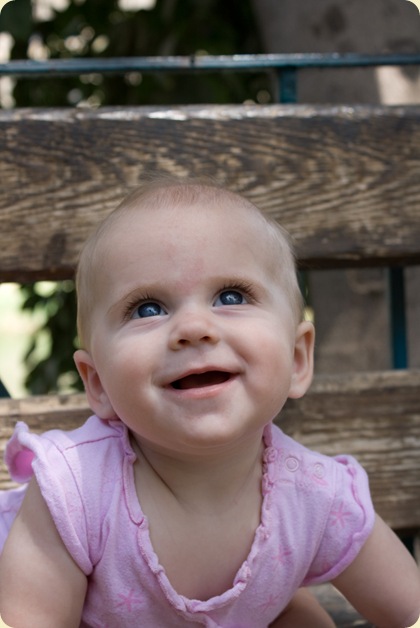 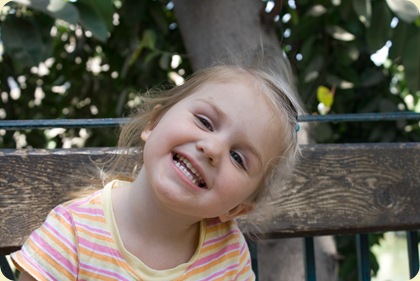 We also took several pictures of them together, some of which worked out better than others. 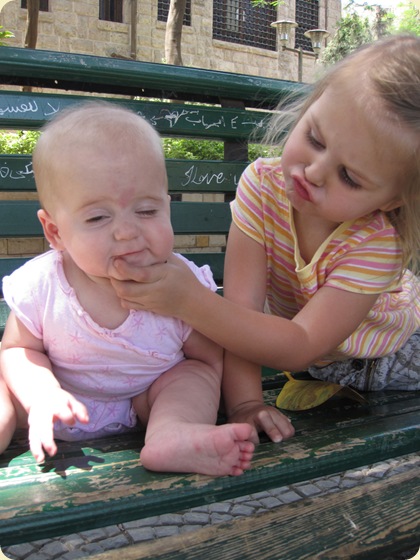 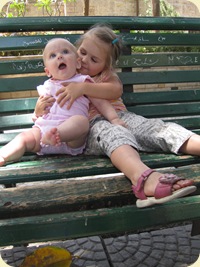 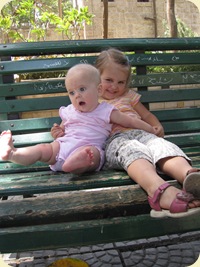 Miriam has recently rediscovered how much fun it is to blow spit bubbles. She can often be found entertaining herself by humming quietly, blowing spit bubbles in the process. She’s a regular little drool factory but we’re still waiting for any teeth to appear. 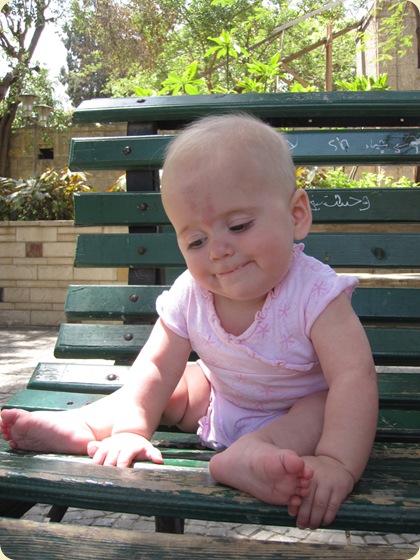 Luckily at least one of our children has stopped drooling. 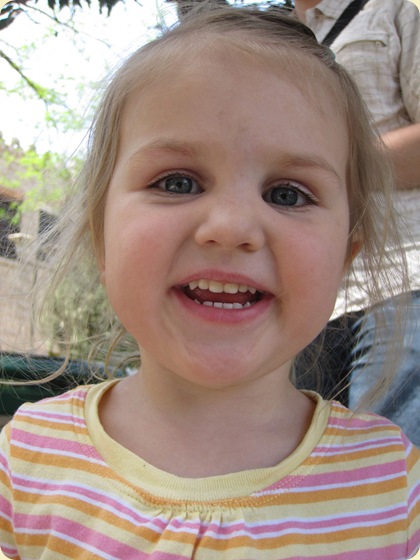 When we had exhausted our supply of snacks we decided to head home for lunch, so we wandered back over to the metro passing like five different hospitals along the way. Manyal (aka Roda) could be renamed Hospital Island.

I think I’m starting to see Cairo through new eyes, yet again. My this-ol-thing attitude has evolved into an I-might-never-see-this-again attitude so I’m taking pictures of everything. Our end goal is to live abroad, specifically in the Middle East, so I’m sure I’ll be in Cairo again someday but I’m getting a little sentimental about leaving, anyway. 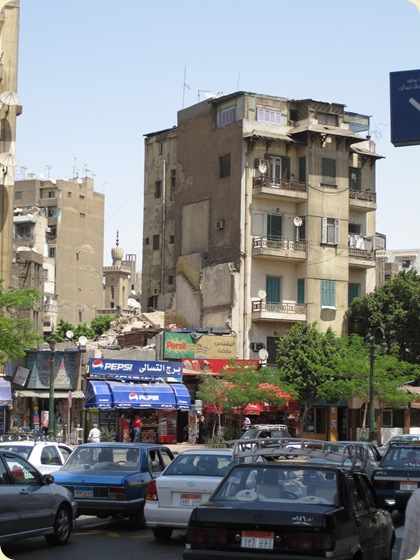 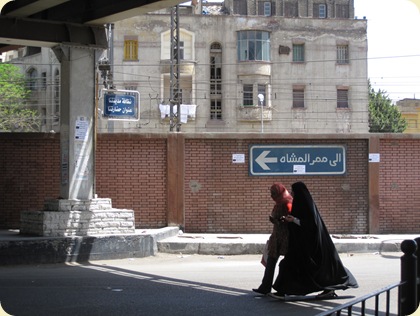 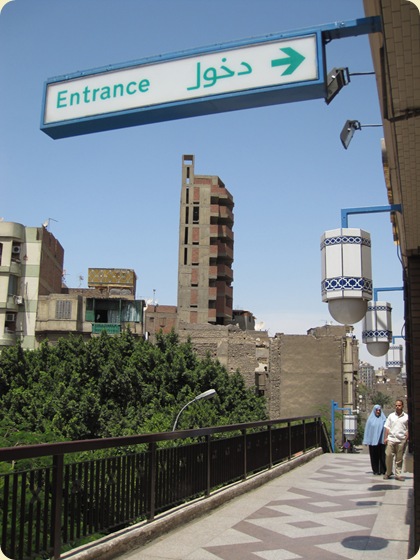 We hopped off the metro at the Maadi stop so we could pick up some produce on our way home. Luckily they were just delivering, so our fruits and vegetables were as fresh as fresh can be. 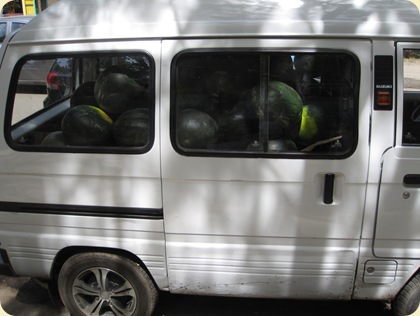 Yes, that is a microbus filled with watermelon, but we passed it up to visit our friends at The Tree. Customer loyalty is a big thing here and The Tree has had most of our business since arriving here. They’re local, they deliver, and they usually give Rachel a free banana. Plus, sometimes we get to walk past this pretty mural to get there. 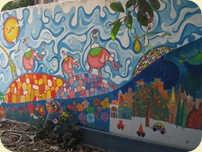 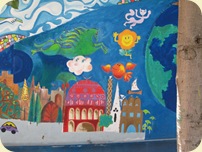 Also, there is a tree that grows right through the roof of their store. What’s not to love? 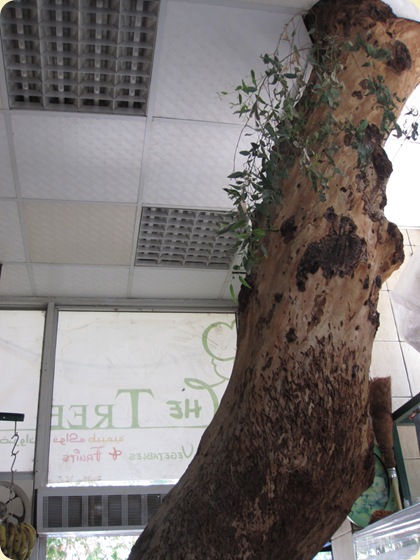 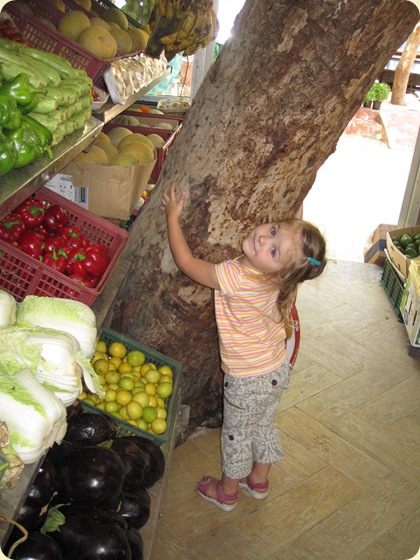 Actually, they didn’t offer Rachel her customary banana today and once she realized that she wasn’t loving it. Great temper tantrums accompanied our departure. It’s not like it was their fault—there were simply no edible bananas today. They were either too ripe or too green.

I think Rachel was also a little tired from running around in the sun all day because she can usually hold herself together, at least in public.

Tomorrow is back to the old grindstone, more or less.