Life was a little crazy this week. We thought that things would slow down after Andrew turned in his thesis but apparently we were being naive. On Wednesday the girls and I left the house at quarter to one to go swimming with the Schaefers, we planned on leaving straight from there to go tutoring, and from tutoring to join some friends on an evening felucca ride.

Hayley is leaving Cairo—in fact, she flew out this morning—so it was our final hurrah with her. Jaehee and Jill both came without their husbands (who were at school and home with the kids, respectively). The other guy in the picture is John. He is Hayley’s friend…and Andrew’s, too, in a way. Hayley and John were in the drum line when Andrew played clarinet in the BYU marching band. 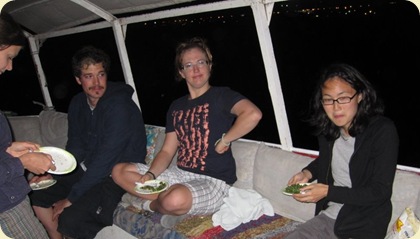 The drive was a little crazy since none of us were quite sure how to get to the flyover and John was driving and he doesn’t even live here. He described weaving through the traffic like doing up a zipper—you just have to make sure all the teeth mesh together properly and you’ll be fine. I wouldn’t drive here for anything, but some people really enjoy it. My friend Amiee says she likes to think of it as ballroom dancing—there are no lanes, really, you just follow line of dance and practice good floorcraft. So totally true—and it reminds me of what Alex, my Russian host-dad would always say about Russian traffic: there are no lanes, just directions.

Driving tangents aside, we got there safely, double-parked by a broken down car on the sidewalk, and made a daring dash across the road to get to the Nile where we successfully hired a boat and enjoyed good conversation while sharing a picnic of tabbouleh and popcorn.

Rachel was so excited she could hardly keep still and kept skipping around the boat. It was dark and windy so Rachel thought we were going really fast when in truth we weren’t really going anywhere at all. She has a vivid imagination, though, and kept “ompst” falling over due to the waves. (Ompst is her pronunciation of “almost.”) 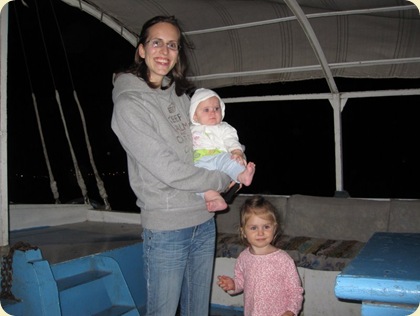 Her favourite part was leaning over the side of the felucca to glance at the moon. A few days ago Andrew taught her about wolves and how they supposedly howl at the moon. 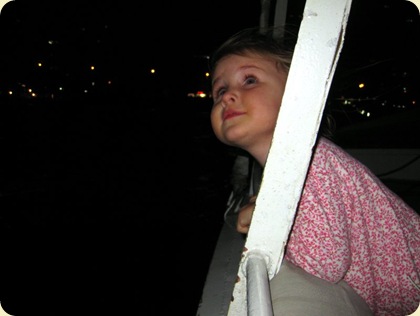 It’s funny to think that this is probably one of our last felucca rides. I’m sure we’ll go on a few more before we leave since we have some visitors coming out but our time is really winding down here—we have less than two months left and still have so much to do.

The girls were pretty exhausted when we got home, as was I. Andrew beat us home from school so he was there to help put the girls to bed, which was nice. We got them in bed by ten o’clock.

No wonder I was exhausted! We’d be out on the town for ten hours!