My dad and Josie flew in yesterday evening. I must be crazy because I let Rachel stay up so that she could see them—let’s just say that by 11:00 PM I was more than ready to send her packing to her room. She was running around singing and dancing and being crazy, but she was so excited that Bumpa and Auntie Josie were coming that I just didn’t have the heart to send her to bed before saying hello.

It was so weird to see Josie. Teenagers grow a lot. I hardly recognized her. I mean, I did, of course, because we’ve talked on Skype every week for the past two years, but I was shocked at how tall and, dare I say, womanly she’s become.

This morning we got up and ready to go by 8:30 AM, which is like a miracle in our house, and headed to the Egyptian Museum. It’s a short ride from Maadi. I say it takes a half hour. Andrew says it only takes twenty minutes. He has taken the metro to class weekly for the past two years so he’s more of the expert but he seems to always underestimate the time it takes to get places…at least when we’re dragging the girls along. I always tack on at least ten minutes.

They’ve closed off all the roads leading to the museum and make you go through a metal detector just to walk down the street. 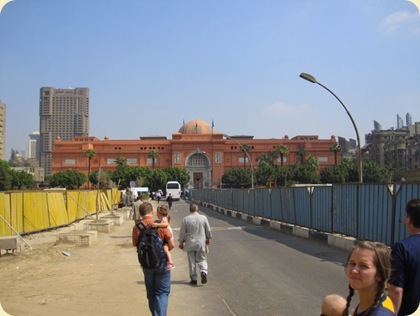 Then you have to walk through the gate, put your bags through an x-ray machine, and walk through another metal detector just to get in the front plaza. 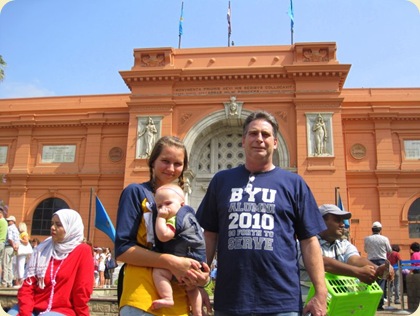 Then you have to purchase tickets at one counter and leave your cameras at a different counter before heading through the turnstile and yet another set of metal detectors and x-ray machines.

Can we say overkill?

Not only do they have machines do the checking, they also have people. The front plaza has undercover cops milling about all over the place. They’d be really effective as undercover cops, too, if it weren’t for the sharp suits that no regular Egyptian would ever wear…oh, and the guns sticking out of their back pockets. Other than that, though, they blend right in…

We got stopped on our way through the final leg of security and Andrew had to let them examine his backpack. After digging through it, they pulled out my dad’s camera.

“Ah-ha!” the guard said, vindictively waving our camera around to his coworkers and tourists surrounding us, “Aha! Aha! Aha! Aha!”

He was beginning to sound like  a Yip Yip. I realize he needs job validation, but seriously…I was getting annoyed.

“Aha!” I said, mimicking his derisive tone, “You caught us! Very good! One less dangerous item has been brought into the museum. Who knows what havoc we could have wreaked with that camera!?”

Which camera did they find? The camera that we had put into Andrew’s backpack in order to leave it at the camera counter. Unfortunately they refused to take Andrew’s backpack so he just put it back on his back after handing them our other cameras, forgetting that we had put my dad’s camera inside. So he had to walk back out through security, leave dad’s camera and then walk back in through security. It was a hassle, we weren’t planning on using the camera, and we tried to give it to them once already….

And then the museum was full of tourist groups and that was annoying, too. Clearly I am not in the best of moods today…

But other than that, it was fun. Today hippos were standing out to me for some reason. I saw them everywhere. It was kind of humorous. One of King Tut’s funerary beds had posts featuring really funny-looking hippopotamodes and I saw a few stellar statues of  a god that I’m guessing might be Set, with a body of a human but a head of a hippopotamus.

We did a whirlwind tour, trying not to bore the girls or our guests, and ended up back in the garden before noon where we were free to enjoy snacking and camera privileges. 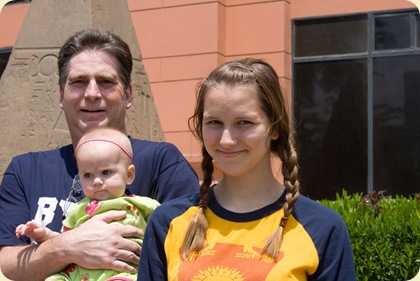 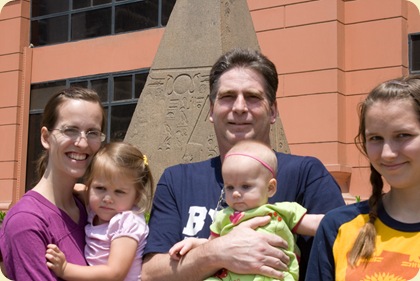 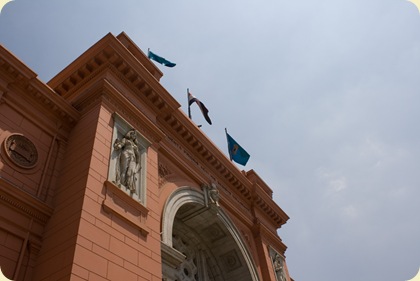 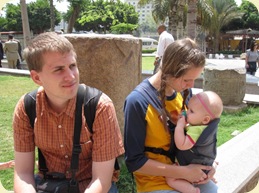 Looking toward the Nile from the Egyptian Museum we saw the Cairo Tower and thought we’d visit it since we hadn’t been there before. It’s kind of like the Space Needle or the CN Tower of Egypt.

We weren’t quite sure how to get there so we caught a cab and took it across the bridge and then decided to just walk the rest of the way because it looked so close. Unfortunately we walked to the back of the tower so we had to turn around and walk all the way around the block to get to the front of the tower. 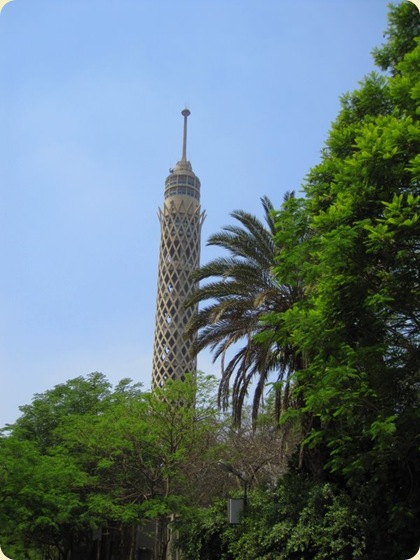 On our way we stopped by an tree that was planted in 1868. It’s a banyan tree of sorts, with roots growing down from the branches to the ground. I think these trees are so interesting. 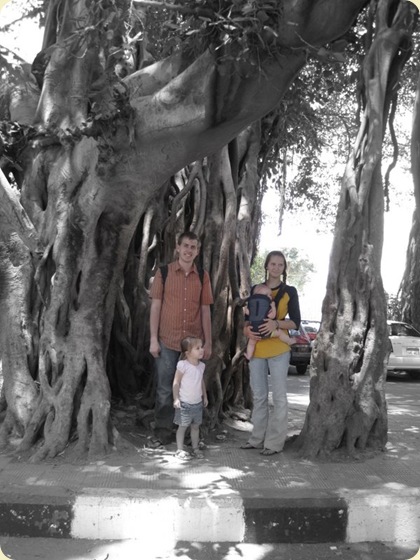 The Cairo Tower looked rather interesting, too. Some of our friends went up a while back and posted pictures of the view, which looked amazing, even with all the city smog. Did you know, though, that it costs 70 LE to go up the tower? Yowzas. That’s per person and there are no student discounts. 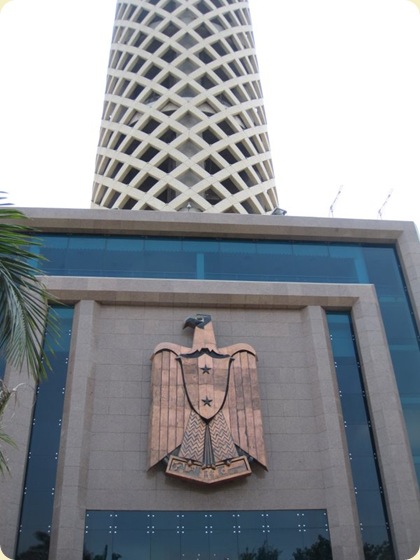 Did you know that it costs only 60 LE to go to the pyramids? And, really, what would you rather do? It would have cost $50 for all of us to ride in a big elevator and that didn’t really seem worth it to us so we were essentially grounded. 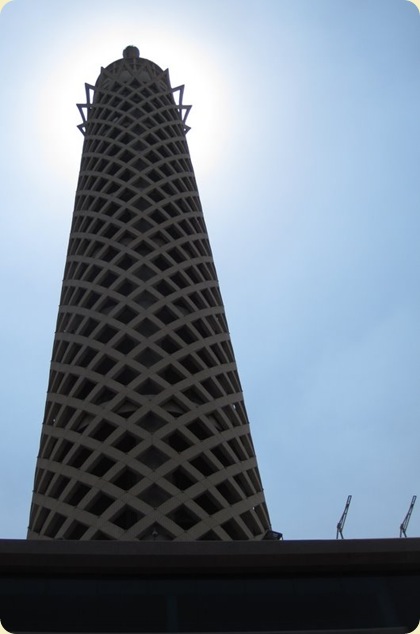 Tired and dejected we decided to cross back over the Nile in search of food. This time, we walked. 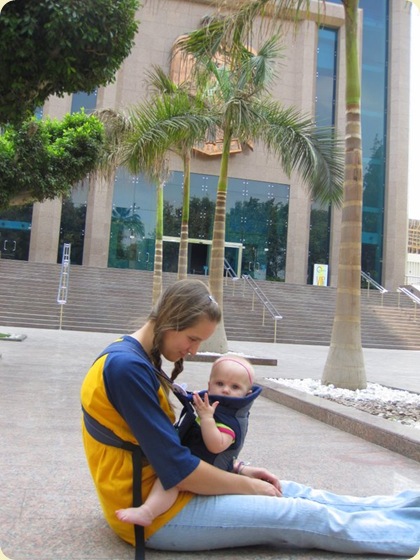 Walking across the Qasr al-Nil Bridge is always a treat. We noticed Hotel Sheperd, which was mentioned in Birds of Passage, and enjoyed looking out over the Nile. 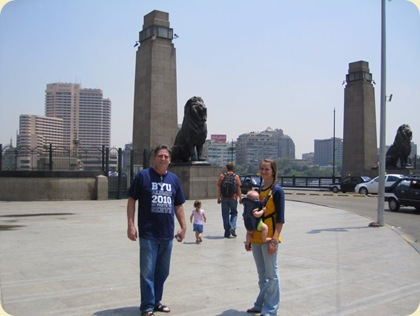 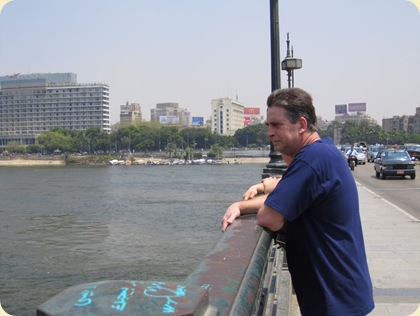 For some reason Rachel has this intense fear of falling into the Nile so while we were looking out over the water she started explaining to me how she would have to swim up to the top of the water if she fell in. She talks with her hands. 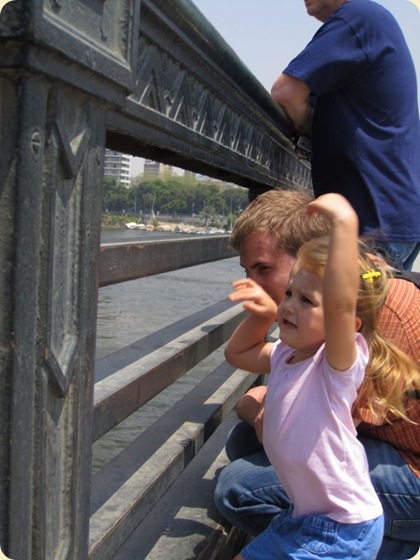 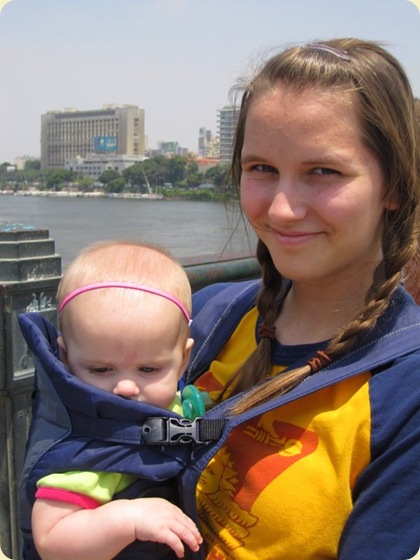 We stopped once we were across the bridge so that I could take care of some necessities for Miriam. I asked Andrew to hold the front carrier for me. So he did. 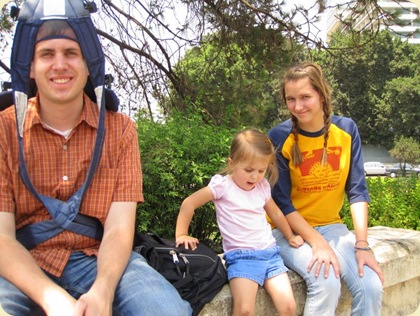 We ate at Felfela, which is a cheap local  joint, but much better than Arzak. We also walked down to al-Abd to get some ice cream before heading back to the metro. 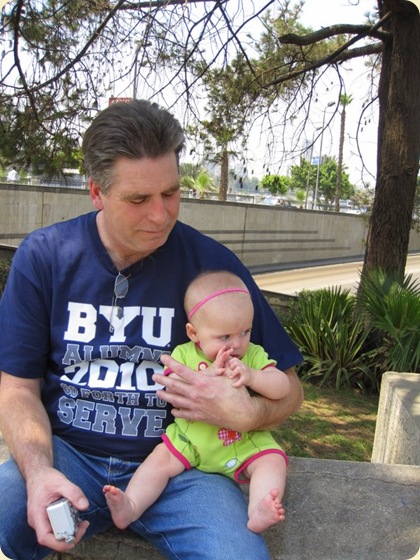 Everyone was sufficiently worn out by the time we arrived home, although the girls didn’t settle down for their naps until several hours later when I left to go tutoring. Without them. For the first time. Ever.

That? Was an amazing experience.

Four months of consecutive Bring-Your-Kids-to-Work days were beginning to take their toll on my sanity and I don’t think I’ve left the house without Miriam ever (okay, one time when I went visiting teaching next door for like twenty minutes I left her with Andrew because he happened to be home) so this was amazing!