This was the first Saturday in a long time that has actually felt like a Saturday. Andrew was home; we spent the morning cleaning and he even let me take a nap with Miriam. After lunch we decided to go on a walking tour of Cairo. A new one.

It’s from the National Geographic.

Since we didn’t want to totally bore the girls we thought we’d take the metro to Ramses and visit the train museum first and then do the walking tour backwards. Unfortunately the museum was closed because it’s Saturday and we ended up dragging the girls all over the station trying to find it. No one bothered to mention that it wasn’t even open. For future reference: it’s at platform one.

Miriam fell asleep and Rachel was hanging over Andrew’s shoulder in a stupor. Needless to say they didn’t have fun.

I’m not sure our walking tour worked out so well, either.

Our first stop was at al-Fath Mosque, which boasts the tallest minaret in Cairo and wasn’t mentioned on the walking tour at all. 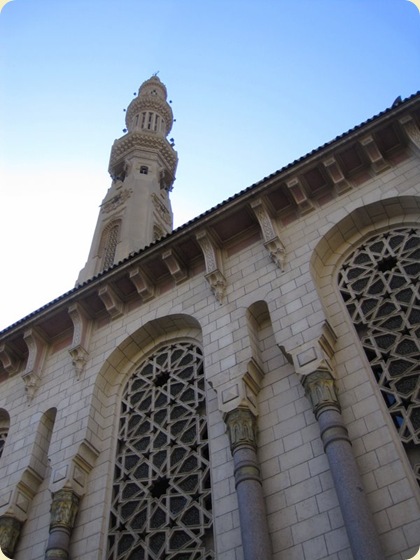 It was completely surrounded by men, squatting in line, waiting for food handouts. 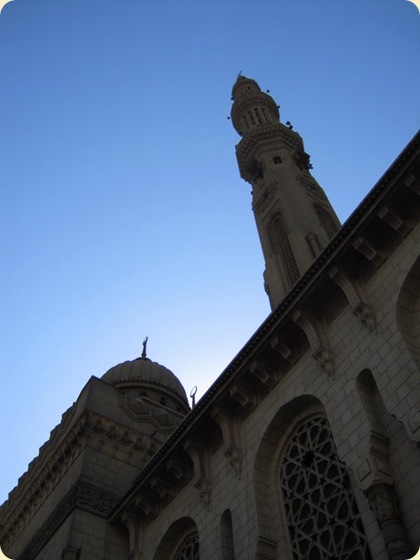 We saw a hospital named Sednaui, which we guessed used to be the department store we were supposed to be looking for. Turns out we weren’t even on Clot Bey Street at all—we were on Gumeriya—which is a pity because Andrew mentioned Clot Bey at length in his thesis and was really looking forward to walking down that street today. So we didn’t see the department store, but I think we’ll survive. 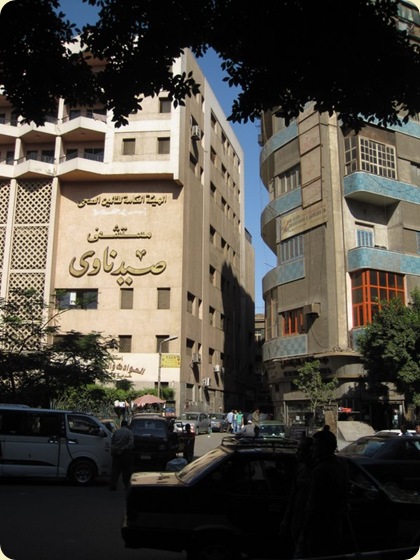 We came across some interesting architecture and talked to a lot of different people while we were trying to find Adly Street where the synagogue is. 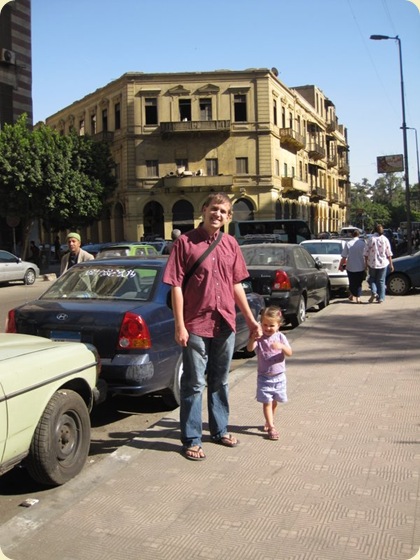 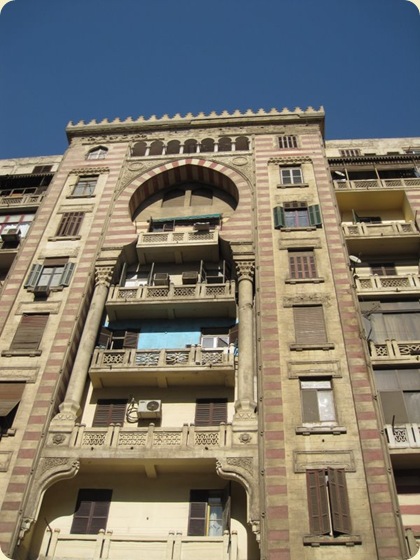 We also saw some good shopping so we’re planning on heading back before we leave. We need a new suitcase and saw plenty of those before the suitcase stores morphed into briefcase stores which naturally morphed into suit stores. The prices looked rather tempting so we might be picking up a suit for Andrew here rather than waiting until we get back to the States.

Before we knew it the suit stores were replaced with shoe stores and I found myself looking at sandals for Rachel. Her toes are poking over the edge of her sandals and she keeps complaining that they are “too tight.” I keep wishing that her feet would just stop growing but it doesn’t look like I’m going to get my own way for a while.

While I was busy looking at sandals for her a pair of flip-flops that were about my size caught my attention. I wanted them instantly because I am a “preety wowan!” It’s like they were made for me and they were only 10 LE. Unfortunately I decided to pass. For today.

But we’ll be back… 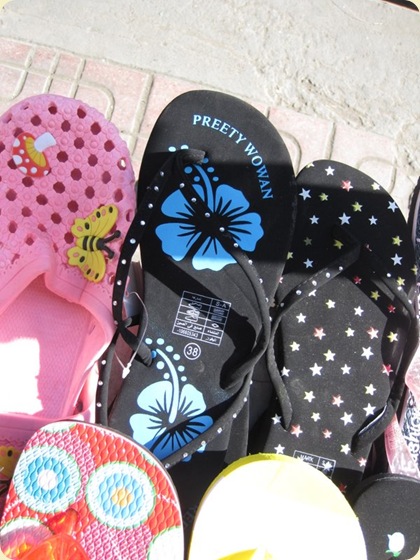 While we were walking we also saw a train of people carrying things on their heads. It’s not at all that uncommon to see women balancing boxes, bags, or babies on their heads and shoulders or to see men doing the same, only with bigger things like furniture and shipping cartons. Still, it struck me as odd to see this many people doing it at once. They aren’t even all walking in the same direction! 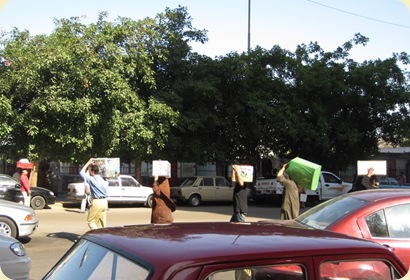 We did eventually find Adly Street and stumbled upon the Sha’ar Hashamayim Synagouge a few yards after that. It’s heavily guarded and I was roughly chided by an armed, and quizzically alert, guard for trying to take a picture.

So we walked across the street and took a picture from there. 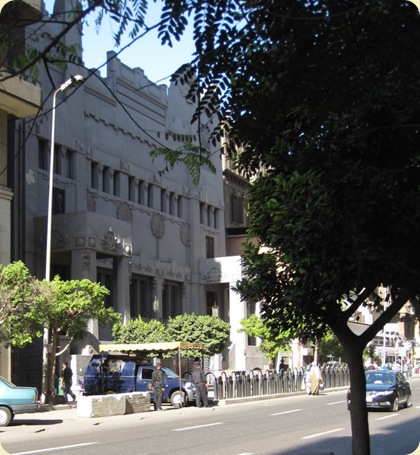 Earlier this year a man tossed a makeshift suitcase bomb out of a hotel window toward the synagogue and it looks like they’ve beefed up security around the place since then.

We continued on our way, only briefly glancing at the movie theaters. We wanted to get to el-Abd, for Rachel most specifically, who had been so patient and downright bored for our whole outing.

El-Abd is a famous sweets shop and it was swarming with people—tourists and locals alike. There was a long line outside the shop waiting for ice cream. Andrew and Rachel stood in it for a while until they got up close enough to realize that you had to pay for the ice cream inside and bring the receipt to the scoopers. 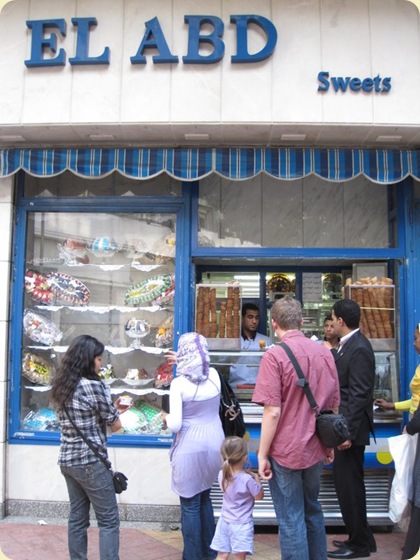 While they were waiting, a man who had just gotten his ice cream started to tease Rachel with it by waving it in front of her face. She grabbed it out of his hands and immediately started eating it. 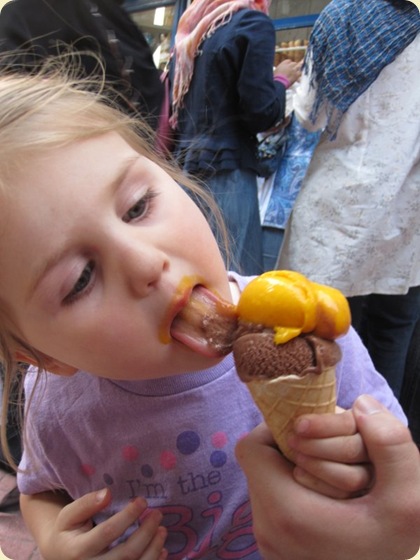 Luckily he laughed it off, told Andrew not to worry about it, and went inside to buy himself another cone. I think it kind of serves him right—what other reaction did he think teasing a two-year-old with an ice cream cone would get him?

After a few licks, Rachel stood up a little straighter and her eyes got all wide. She turned in about five complete circles and was buzzing on a sugar high for the rest of the day…she just suddenly came to life like putting money in an arcade game.

So we ended up only having to buy ice cream for the two of us. Not that it would have mattered much at 1 LE per scoop. I highly recommend the strawberry (they didn’t have lemon).

While Andrew and I were discussing something about Talaat Harb we glanced in the direction of his statue for a moment, taking our eyes off Rachel to do so. In the few seconds that we weren’t watching her she decided she needed to wipe her mouth so she grabbed a discarded napkin from the ground to do so. Our attention snapped back to Rachel when we heard the group of girls that had been ogling Rachel squeal in disgust. 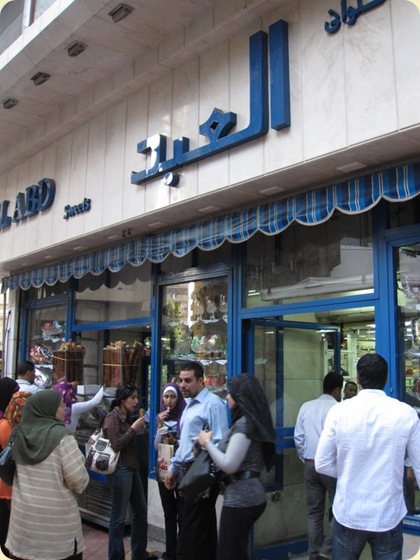 After finishing our ice cream, and cleaning ourselves off with unused tissues from my purse, we gave up on the walking tour altogether and simply headed for the metro at Sadat. 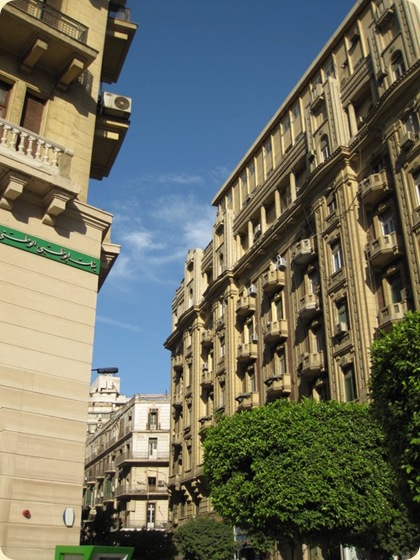 Miriam came with us, of course, and just sat quietly in the front carrier almost the whole time. She’s dressed head-to-toe in pink but everyone kept asking her gender. Perhaps it’s the blue carrier. More likely it’s because her ears aren’t pierced. 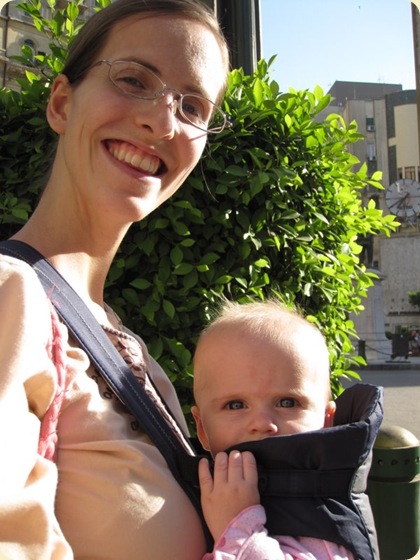 Rachel has grown up enough that she’s rarely mistaken for a boy anymore, even though her ears aren’t pierced, either. She ran all around the sidewalk singing and dancing in between peoples’ legs while they tried to stroke her lovely long (and quite obviously feminine) hair. Andrew and I had a hard time keeping up with her.

Next time she’s definitely getting a single scoop.

Single scoop next time, I thought, but I looked at her fingers, anyway, to see how she was making an O. I think she has inherited Andrew’s freakish double-jointedness because I can’t do this with my fingers (yes, I tried) but the two of them can (Andrew tried, too). 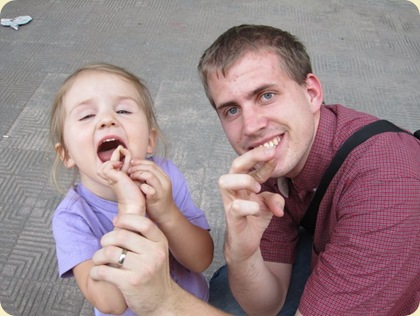 We let Rachel stand up alone on the ride home, hoping that the hard work of balancing would calm her down. It didn’t and she ended up on Andrew’s lap in a fit of giggles, which turned into hiccups, and then she threw up some of her ice cream and it was all a big mess. Next time she’s definitely getting a single scoop…maybe even a half scoop. 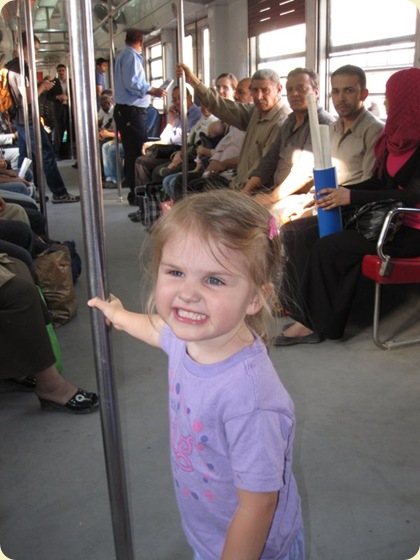 Meanwhile I sat next to an older woman who insisted on talking to me for the whole ride. I tried to make conversation but, let’s face it, my Arabic isn’t quite up to conversation level yet. I did what I could but ended up telling her that I couldn’t understand a whole lot.

“Maa laesh!” she’d say before continuing on with whatever it was she was talking about.

I’m pretty sure she was giving me mothering advice but maybe she just needed someone to talk to and I was a captive, mostly-silent audience.

We let Rachel run around in the park on the way home and then I had her run around the apartment while I took care of Miriam’s needs upon returning home. She was still buzzing until around 7:30 PM when she announced that she was tired. Then she crashed.

She and Miriam were both in bed asleep before 8:00 PM. That never happens.

Perhaps we’ll get the double scoop next time, after all.