Spring is busting out all over

As of yesterday, spring has officially sprung in Egypt. Yesterday was Sham el-Nassim, or Sniffing the Breeze Day, which marks the first day of spring (and the Khamsin). 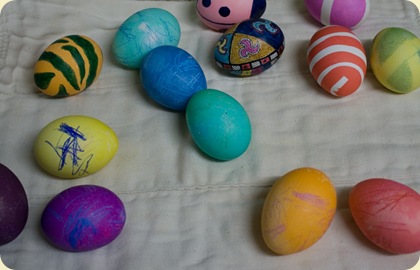 Sham el-Nassim is actually an ancient pre-Islamic holiday that took place during the harvest month Shemu in Pharonic times. It always falls on the Monday after Easter, according to the Eastern Calendar, and has since the Christianization of Egypt. The date stuck through Islamification, the Ottoman Empire, the Muhammed Ali dynasty, and has the same date today.

It’s celebrated by Muslims and Christians alike, something Hamida, the housekeeper at my tutee’s house, was really excited to tell me.

“Sham el-Nassim mubarak!” I told her as the girls and I were leaving.

She trailed off and made some obvious hand gestures.

It’s particularly interesting this year, I suppose, that we share the holiday since the Gregorian and Julian calendars aligned so Easter fell on the same day in both Western and Eastern orthodoxies. We’re often a couple of weeks off.

Besides sweet bread, traditional foods for Sham el-Nassim include fesikh, green onions and hard-boiled eggs. People flock to the zoo and other public green spaces or head out to the countryside in order to sniff the breeze.

We didn’t really celebrate Sham el-Nassim, although I will admit that yesterday was a particularly beautiful day, but we did colour eggs on Sunday. Rachel had a blast doing hers. She was going through eggs like…water. We had her colour on them with crayons before dyeing them. And we had her colour on paper in between decorating each egg. She still ended up dyeing more eggs than either of us. It was fun for everyone, though. 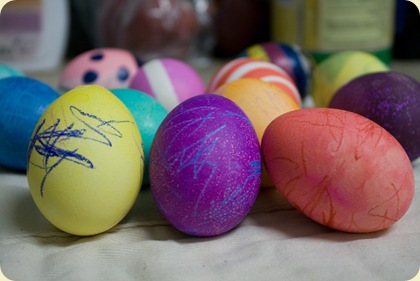 I went a little Slavic and made a mock pyansky using permanent markers. I wasn’t entirely pleased with the finished product but it was fun to do and still turned out pretty well. I think I’ll try again in subsequent years. 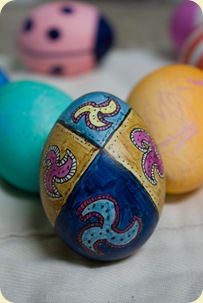 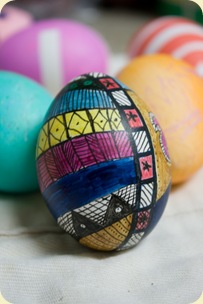 Andrew, meanwhile, experimented with electrical tape to produce eggs he described as “minimalist” and “puritan,” since his designs were simple and used only dye (also, he says, it’s because he’s lazy and inartistic and was trying to vindicate his lack of enthusiasm by being erudite). He found this technique on Lifehacker, which quoted from this website, which cited Martha Stewart. Our cousins Brock and Layla also used black electrical tape this year. Go figure. 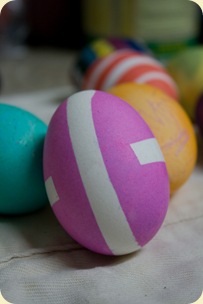 We almost didn’t have our annual Heiss Family Easter Egg Smack Down, but then we did. Not until after the girls were in bed, unfortunately, and with just minutes before the final session of General Conference started, I was able to convince Andrew that the tradition must go on. He decided we had time to do a quick “final four” so we each selected two competitors and had our smack down.

Andrew’s choice competitors were Psychedelic Swirl and Mottled Ball. Mine were Pyansky and Jihad Princess.**

I’m pleased to announce that both my eggs, Pyansky and Jihad Princess, squashed Andrew’s eggs. In the final round, Jihad Princess came out on top once again with hardly a crack. Do I choose good eggs or what? 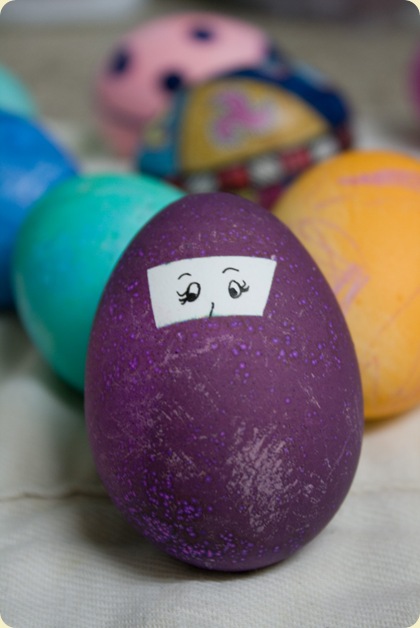 *Painted eggs have been in tradition, again, since Pharonic times—some purport that colouring eggs was a tradition borrowed from Egyptians and adopted into Christianity later; I wouldn’t doubt it as eggs were apparently meant as a symbol of new life in Ancient Egypt as well as in modern Christianity.

**I realize that naming my egg Jihad Princess might come across as both shocking and rather politically incorrect and I almost changed the name to something different specifically for this post just to avoid any bad vibes. However, I chose to leave the name as it originally was and wish to instead state that Jihad is actually a common given name in the Middle East (though usually it is a boy’s name, except Andrew tells me that in Egypt it is more often a girl’s name while in the Levant it is more of a boy’s bame) and that Jihad does not in fact mean “holy war” as it has come to be defined under “terrorism.” Rather, Jihad is a “struggle,” something to strive for. To quote Wikipedia,  “it can simply mean striving to live a moral and virtuous life.”

Not only that, but clearly Jihad Princess kicked trash during our annual Easter egg smack down. She struggled victoriously and was therefore aptly named. Don’t be so quick to judge…

I have an ancestor named Bathsheba. Just sayin’.

***No, these stars don’t lead anywhere else, but, yes, all those eggs are sitting on a cloth diaper. And that cloth diaper is still in our fridge with uneaten eggs on it. Don’t worry; it was a clean one.