Do not disturb the CAVEGIRL 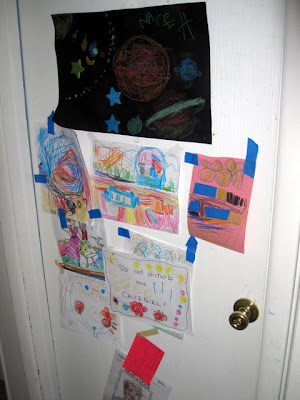 It's plastered in drawings she's done that she thinks are particularly awesome. Sometimes I agree that her artwork is awesome—the one on the far left under the solar system is a snail she drew. It has a twirly shell and about seven legs. It's awesome. I still have no idea what the pink picture on the far right is and I've never been in awe over it. The office door is covered in drawings, too, as is the storage room door.
Anyway...
Rachel's been having trouble having Miriam around all summer long. Or maybe it's the other way around. Either way it will be fixed tomorrow when Rachel goes back to preschool. Yeehaw! Two mornings a week Miriam will have alone time (with me), then Rachel will get back from preschool, we'll eat lunch, and Miriam will go down for a nap giving Rachel alone time (with me). It's possible that I'm really excited for tomorrow.
I think Rachel is excited for tomorrow as well. She handed me a letter today and asked me to give it to Miriam. The letter said, "E3LNRAMRRE."
"What does it say?" I asked.
"Can't you read?" she countered.
"Yes. But I want you to read it."
"It just says, 'Miriam, one day you will grow up and then you will understand why sometimes I need alone time and you can have alone time, too, and we can be friends one day when you grow up and you're four like me.'"
Rachel gets frustrated that Miriam can't quite do big kid stuff yet so she will force Miriam to either a) do whatever she wants her to do or b) force Miriam from the premises. Both situations make Miriam frustrated and then the girls start screaming at each other and then I get frustrated. We've been having a lot of frustrating days lately.
The sign is probably a good idea...except that Miriam can't read yet and so is not a very good obeyer of signage. After I finished writing the word "CAVEGIRL" I added an exclamation mark.
"Why did you write an upside down i?" Rachel asked.
"That's not an upside down i," I told her. "That's an exclamation mark!"
"Oooooh," she crooned, "I wanna try and write a extamaycan mark!"
Rachel decorated her sign with flowers and stars and planets and approximately five suns (as well as multiple i's and !'s and "CE's—you know, like a C and a E mixed together," which happen to look a whole lot like the Euro sign (€)).
When she was finished she looked at her paper and said, "That's a mess. Do you know what Mr. Kramer does with crayon crumbs? He blows them away. Sometimes I use my hand to sweep them away but that makes your paper messier so it's better to blow crayon crumbs away."
I enjoyed the alliteration of her question—Kramer, crayon, crumbs.
She's close to wanting to learn to read and that's an exciting place to be. I think reading will open up a whole new world for her. She's been trying to spell lately, too—she can spell 'cat' and she can spell her name but beyond that she just does a whole bunch of guessing. The other day she tried to spell Miriam and asked me to help her, so I began spelling out loud.
"M...I...R...I..." I said.
"I again?!" she asked.
"Yes. Then an A...and then M."
"M again?! Are you sure?"
"Yes, I'm sure."
She's a funny one.
Posted by Nancy at 4:59 PM