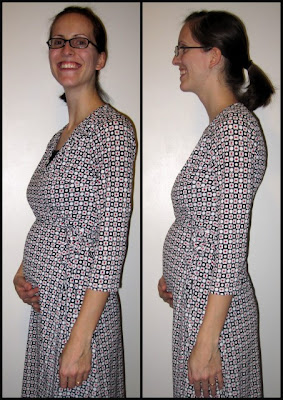 I think my tummy's poking out about as much as it was when I was this far along with Miriam, perhaps a little more so but I was rather exhausted when this picture was taken and my stomach seems to poke out more the more tired I get because I get too tired to pay attention to my posture, I suppose.

I thought about changing into the blue shirt I wore with Miriam's 17 week shot but then I realized that would involve standing up. I am just tired enough that standing up sounds dreadful.

We had a rather busy day today—it was so busy that I didn't even get a nap (*sniff*). My mom picked the girls and me up at noon, which meant that we had to all be ready by then, so that we could go pick Josie up at UVU (she'd just taken the ACT) so that we could run to BYU for our dance practice. We danced for an hour and although there is no fancy footwork—no footwork at all, actually—it was rather taxing. We learned "the wave" today, which involves kneeling down and leaning back, then kneeling down with your torso flat against your knees, and then kneeling up with your arms stretched up, and then down and back, and then down and flat, and then up, and then down... Once you've done that several times you reverse the direction.

My legs were protesting all the stairs in the HFAC, that's for sure.

We spent a while hanging out in the art plaza because we were too early to head to our next appointment, which was a baby shower for my cousin Heidi. Then when we were ready to go my mom took us this special way over a catwalk, which Rachel thought was really cool. "We went on a bridge at BYU!" she told Andrew.

They also wanted to see the fountain in front of the ASB before we left. 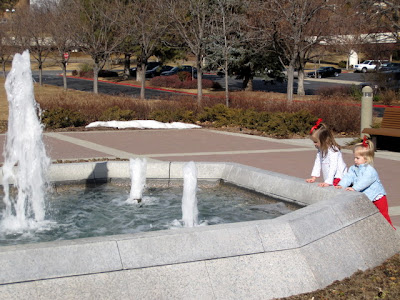 And look! They're wearing matching ladybug outfits! Well, almost matching. Rachel was trying to convince Miriam, again, to wear her ladybug outfit but Miriam threw a fit about it so I showed her some pictures of her wearing it back at Thanksgiving and asked her if she looked scared then. She didn't so I guess she figured she didn't have to be scared of it now. "Not ladybugs is mean," she explained later. "They is just nice." 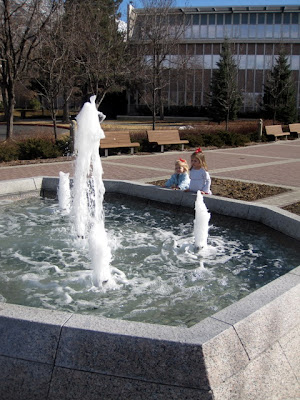 Heidi's baby shower was fun. It was nice to see some people I haven't seen in a long time (like Heidi and Shannon and Ellen, and my aunt's old neighbour) and chat. Heidi's ten years older than me and this is her first baby so it's really quite exciting. I sometimes think it's strange that I'm suddenly having kids around the same time as cousins who have always seemed grown up to me because by the time I was old enough to remember them they basically were grown up. My cousin Mindy is having a baby in June, too, and though it's her third she's quite a bit older than me, too. It's fun though because it helps us bridge the age gap a bit, I think.

After the baby shower we headed home and I made a quick shepherd's pie out of the leftover meatloaf that Andrew made last week. The girls didn't like it—Rachel even gagged so dramatically that she made herself throw up—and even he didn't like it because he put too much onion in it (a whole onion for one pound of hamburger). I ate it for lunch once or twice this week but we still had so much left and I was the only one eating it so it became tonight's dinner. We ate almost all of it so it was a pretty successful meal considering its roots were from such an unsuccessful one.

We ate dinner and rushed to get ready to head to Salt Lake for a friend Mark's wedding reception. He's from High River, which is where I'm from (twelve years ago). It was fun to see some old friends though I was already so exhausted I didn't do much mingling.

And now we're home and the girls are finally in bed and I'm really absolutely exhausted, which probably means I should go to bed...but Andrew's still up doing homework so I'm still up, too.

And because my brain isn't working and I can't figure how to tie this in, here's a random baby fact: Andrew can already feel the baby kicking. Sometimes the baby kicks a lot. Rachel really wants to feel it but is never patient enough to wait for the baby to start kicking. There will be lots of kicking in the future, though, I'm sure...considering it kicks so much already.
Posted by Nancy at 12:15 AM