Miriam and I stayed up late last night watching "UP." I forced Miriam to eat freezie (OtterPop) after freezie after freezie. She went to bed around midnight and didn't get up until nearly 10 o'clock this morning. It was wonderful, even if I didn't get to sleep the whole time. I have more than one child to cater to so I rarely sleep through the night but I'm pretty much used to that by now. Rachel's been having trouble sleeping—she's been rather stressed out about everything, too—and woke up crying in the middle of the night and I of course had to get up to use the bathroom a couple of times due to a silly baby bouncing on my bladder.

I gave Miriam some tylenol at around 5:00 AM but she didn't really wake up for that at all. She just drank it right down—she's a very obedient sleeping person.

We had our first fever-free day today, which was almost as wonderful as sleeping through the night, if not more so. Of course, we've been pumping Miriam full of tylenol/ibuprofen every few hours and haven't given her fever a chance to come back. The doctor said it was probably best to do that for a couple of days since she's been going from normal to deathly in no time flat.

I'm not usually one to get nervous about fevers but Miriam's had a fever since Friday. On Saturday when it was just around 100 I wasn't worried but when it started creeping up into 103.5 I started more drastic measures (like actually giving her tylenol and bathing her to get her fever to come down). Watching the numbers flip by on the thermometer makes me nervous—our thermometers have spent the past couple of days zooming up to 104. Today though the numbers were just creeping through the 90s.

98.6 has never looked so beautiful before. It might just be my new favourite number.

We've still been pushing popsicles and fluids all day. The, uh, "cork" that was causing her constipation popped out yesterday after we came home from the hospital and she's been a bit runny ever since. Okay, so "a bit runny" might be a bit of an under-exaggeration. It's so watery that it just...comes... So we pulled out the diapers because we've gotten late to the potty a few times and it's not pretty.

She's at least eating again, though. She had a bit of bread at dinner, some applesauce, and a brownie.

My visiting teacher brought dinner over for us today, which was so nice of her. She tried to bring us dinner on Sunday and Monday but Andrew had plans for both those nights (I think food is something he feels he can control and he felt so out of control that he wanted to make dinner, if that makes sense) so we declined but he wasn't home for dinner today so I told my visiting teacher to come on over! I didn't feel like cooking! She brought us some yummy broccoli soup. Rachel and I really enjoyed it but Miriam just turned up her nose. The soup was accompanied by a loaf of bread, straight out of the oven, some salad, and a plate of brownies. She also brought some gifts for the girls—some princess paraphernalia that they've really quite enjoyed.

We're hoping to get to go to Salt Lake tomorrow—Salt Lake Community College is having an Asian Festival, which is focusing on Indonesia this year, and so that's where we'll be doing the Tari Saman that we've been practicing.

My mom came over to practice tonight and brought the girls a few early Easter gifts. They were supposed to be in bed before she got here but they weren't. And I think they just barely fell asleep—they've been goofing off in their room (which must mean that Miriam's really feeling better). 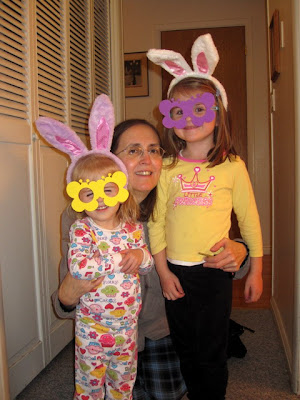 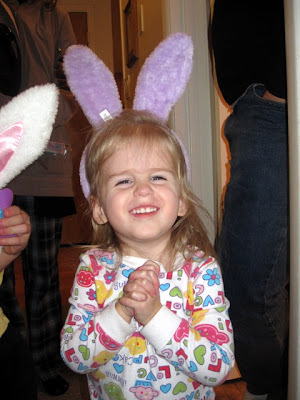 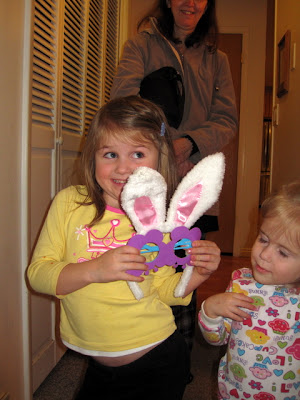 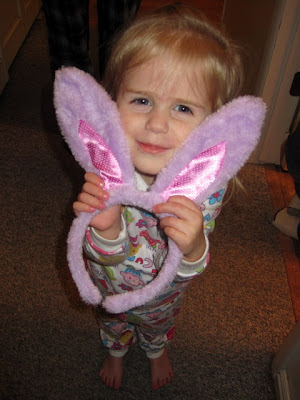 When is Easter this year, anyway? We're already into Lent so it must be coming up...but I haven't really thought about it. Is it just me or has February been kind of crazy? Okay—I just looked it up and it isn't until April so I've still got a month to prepare. For a minute I thought it was going to be one of those weird years when Easter is in March.

That means we have a whole month to learn the bunny hop. I'm pretty sure Rachel is old enough to figure it out this year. They could probably both learn the chicken dance.

Anyway, we have to leave in the morning for Salt Lake and I'm thinking we'll just go as long as Miriam is still fever free and I bring along Tylenol and diapers. My part is only like five minutes long so I'll spend most of the time holding Miriam on my lap while we watch the Gamelan group perform. If we were at home I'd just hold Miriam on my lap while watching princess movies so it's basically the same thing as being home, right?

I've been practicing for this for a month and I'd hate to miss our one and only performance. I think Miriam can handle it. Kids are weird how they bounce back to acting normal. Miriam was lying in a hospital bed yesterday and this evening she was dancing around the living room. I'm so glad she's feeling better—thanks to everyone for your thoughts and prayers!
Posted by Nancy at 12:51 AM