This winter has been decent, I suppose. It hasn't been terribly cold but it hasn't been wonderfully warm, either. It looks inviting enough outside that I want to go out but once I go out I want to go back in. In a couple of a weeks I have a suspicion (or at least a hope) that we'll officially enter sweater weather and we can return to the park. I hardly know what to do indoors anymore.

We checked a book out of the library a couple of weeks ago called My Mom Hates Me in January (by Judy Delton). I thought it was hilarious and am rather sad that it's out of print (and costs more than $100 to get a used copy on Amazon...no thanks) because I think it's one that needs to be in our permanent collection so that I can read it to my children every year.

His mother eventually sends him outside and he talks about how he went sledding and built a snowman and made snow angels until he was freezing cold and soaked through to his skin. But when he comes home his mother said, "You're back already?! You just went outside!"

At the very end of the book it starts to turn into spring and his mother gets all excited and calls him to look at the birds and then makes popcorn and breaks out the play dough and they have a wonderful afternoon together. The boy concludes that, perhaps, his mother doesn't hate him after all. Perhaps, he thinks...she just hates January.

And that is just like me, except that as a general rule I also hate November and December and February as well. And sometimes October and March, too. It all depends.

Like I said, this year hasn't been terrible at all but we're still feeling a little cooped up.

My friend Tracy suggested we go to story time at the library today—to get out of the house and shake things up a bit. It was so nice. Michelle met us there with her kids and we had a great time.

The storyteller was from Equador and taught the children some Spanish—they sang songs and read stories in both English and Spanish. Rachel got to participate in the story of The Empty Pot (by Demi), which (believe it or not) she was actually excited about. 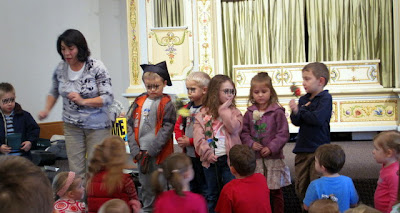 "Who knows how to count to 10 in Spanish?" asked the storyteller.

Miriam's hand shot up in the air. She can barely count to 10 in English.

"Who knows how to say good morning in Spanish?"

Miriam's hand shot up in the air again. She's so silly.

I think the storyteller knew Miriam was out of her league, considering she was a full head shorter than most of the kids there, and never called on her. That's probably a good thing because I'm not sure that Miriam actually knows what to do once you're called on. All she knows is that Hermione does it...it must be cool.

We sang a song in Spanish, to the tune of Are You Sleeping? (or Frere Jacques).

Then we sang a verses with buenas tardes and buenas noches.

The kids seemed to enjoy themselves and it was nice to not be the only one singing (lately Here's a Ball for Baby has been uber popular at our house) and dancing and storytelling.

When we got home we ate lunch and then Rachel invited Emily over to play for a while until Miriam went down for her nap and then Rachel and Emily went to play at Emily's house (because I knew I wouldn't make it to bedtime without a nap, myself) until dinnertime.

We were talking about moving during dinner.

My friend posted about her recent move to Florida and discovering her sunroom was completely infested with brown widows. Aside from how interesting the egg sacs (oothecas) looked, my first thought was, "Oh, dear. North Carolina is pretty near Florida. I'll bet they have some horrible creepy crawlers, too."

I didn't used to be quite as afraid of spiders as I am now. When I lived in Port Coquitlam we had these beautiful spiders (most likely European Garden Spiders since I remember calling them garden spiders) that would spin out beautiful webs. They could get to be huge but I was never really afraid of them—they stuck to the garden (meaning I never found one lurking in my closet, which is not something I can say about wolf spiders) and simply seemed beautiful. My friends and I would sometimes watch them catch their prey and sometimes we'd flick ladybug carcasses out of their webs to give them a proper burial. Anyway...

Then once upon a time I read an article in the big print edition of The Reader's Digest at my grandparents' house about Brown Recluse Spiders and I've never been able to face a spider without shuddering since. Though prior to reading that article...if there ever was a spider in my territory (read: not outside) I wasn't gushing with joy...but I would trap spiders for my sister who was too afraid to face spiders herself.

Now that I'm married I usually just shriek for my husband. Yup. I'm that wimpy.

So I looked up common spiders of North Carolina. On Duke's website, no less.

One of the most common descriptions of spiders was "large and commonly encountered." Goody.

Fortunately not many poisonous spiders were listed but it was the "large" part that threw me. Now, this particular picture is from Missouri...which isn't North Carolina...but notice that the spider is large. It's 5 slats on a Venetian blind—which is like as big as my hand. That's not a spider you can just "squish" with a fly swatter or bit of toilet paper (I obviously don't hold the same morals as my friend who removed the egg sacks of the poisonous brown widow and placed them in her garden—granted, that was before she knew they were going to be poisonous babies and not regular, ordinary, harmless house spider babies).

I'm not sure I can face that on a daily basis.

But...it's kind of a strike against both Duke and Indiana because when I looked up Brown Recluse Spiders (which was just now because I didn't look them up earlier in the day) I noticed that their habitat includes Indiana. But not North Carolina.

Anyway, so I was discussing things like cockroaches and large spiders and snakes with Reid and Karen around lunchtime. So at dinner the topic of moving came up again. Rachel said she was afraid to move (I thought this was perhaps because of the discussion about snakes we had earlier in the day) but she said it was because she didn't want to move anywhere with, "like, languages."

"Language isn't something you can really escape from," I told her. "But this time we'll be moving somewhere in the United States and so wherever we go people will speak English."

"English isn't a language," she told me.

"No. It isn't. It's just normal talk. Languages are like...Arabic and Spanish."

"Not English. I speak English. I don't really speak languages though."

"English is your native language. Other languages are foreign to you, which makes them hard to understand. But people who speak other languages have a hard time understanding English. That's why it's nice to learn other languages, even if it's just a bit. Like if you learned how to say hello in Spanish then you could say hello to our neighbours in Spanish and they would probably like that."

"Why?" Rachel asked. "They speak English."

"Yes, but sometimes when you're far away from home you miss hearing your native language even if you speak the language of the place you live."

"Know what? I already know how to say hello in Spanish."

"You know what nacho means!" I told her, thinking this was a very random question. "It's when you melt cheese on a tortilla chip."

"Not the English meaning. I want to know the Spanish meaning!" she clarified, which was nice to know but still confusing because as far as I know nacho means the same thing in English and Spanish (nachos were invented by a Mexican living in Mexico but working at a Tex-Mex restaurant across the border in Texas. He coined the term nacho, so obviously it should mean the same thing in both English and Spanish (at least in Mexican Spanish)). I told her so.

"But it doesn't mean the same thing!" Rachel insisted. "We learned it today at the library but I can't remember what it means—buenos nachos!"

"Oh!" I said once it had dawned on me. "Do you mean buenas noches?"

I think we'll be fine moving wherever we're moving to. We're adaptable creatures—we can adapt to weather and spiders and languages. We'll fit in just fine...now to just figure out where it is we'll be headed.
Posted by Nancy at 1:36 AM