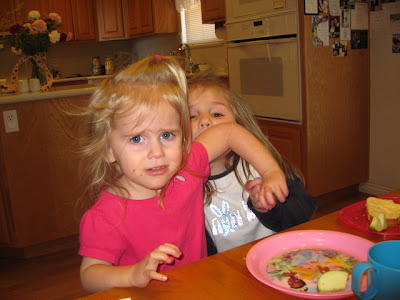 We played with play dough that afternoon. Before nap time, I think. I don't remember. Friday seems like it was lightyears ago.
Here's Rachel showing off her snake. Although she looks like she's making a dorky face, she's really just saying, "Sssssss!" 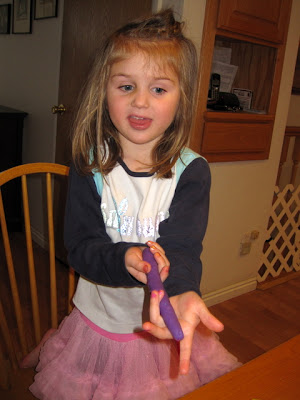 And here is Miriam showing off her snake. Although it wasn't as smoothly formed as Rachel's, Miriam did go through the trouble to mark a fancy design on the back of the snake. Rachel did that on her snake, too, but I was impressed that Miriam copied her. 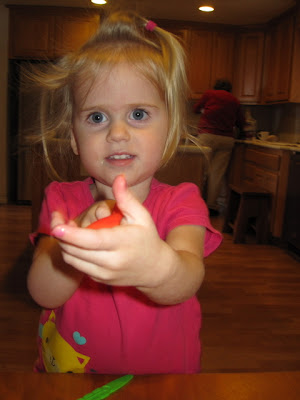 Here's Miriam giving you "the smolder" and exhibiting her snake-rolling skills: 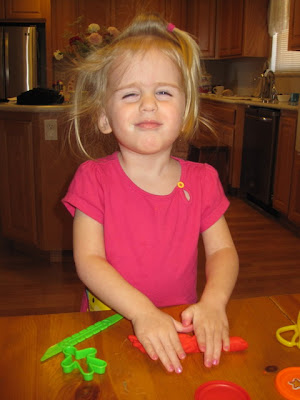 And that's the last picture I have of my healthy girl on my camera because it was Friday night that she started acting sick. *sniff* Glad that's (hopefully) over.
Here's Rachel making...something. I think she was making a dish at this point... 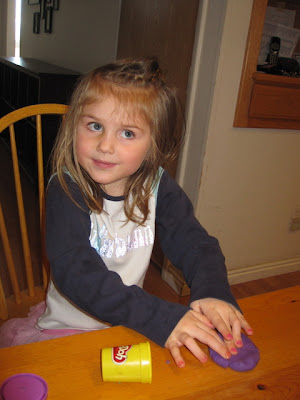 Here is the note and picture Rachel made for Miriam during sacrament meeting on Sunday when we left Miriam home with Karen. The note says, "Miriam I am sorry you are sick." She got all the letters on there. Honest. 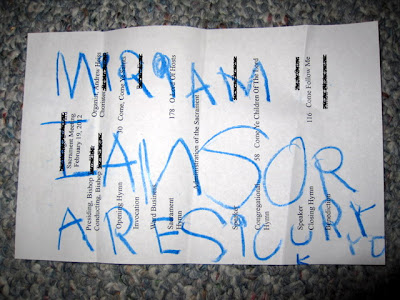 (Note: this is the bulletin from last week and the hymns are Come, Come Ye Saints, O Lord of Hosts, Come Ye Children of the Lord, and Come Follow Me. Aside from O Lord of Hosts we were just a-comin' that week. We had a good laugh about that.)
And here's the picture of our family. Andrew is sporting a tie. Miriam is next to him—she's got a yellow face because "people often turn gross colours when they are sick" then there's Rachel and then me. For some unexplained reason I am pretending to be a ballerina. All the girls have matching ribbons on our dresses. 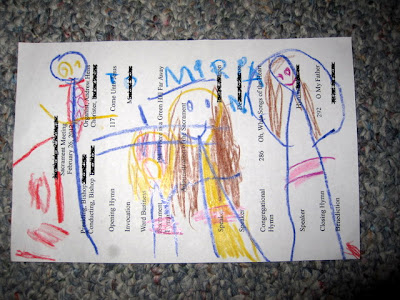 Rachel was so concerned about Miriam on Sunday. When we finally came home from the hospital and started dinner, Rachel gave Miriam whatever she wanted—princess plate, pink cup, pink fork, you name it. Usually they'd fight over these items but Rachel was just so happy to have her sister home and looking healthy that she happily doted on her.
In the morning, though, I woke up to the sound of them in the kitchen having their regular fight over that silly princess plate! First of all I was like, "How are you guys already awake?!" Second of all I was like, "Why are we fighting over the plate?" We're always fighting over that plate—they hide it from each other and vie to set the table just so that if it hasn't been used yet in the day they can give it to themselves. Sometimes I wash it between meals just so that we can take turns with it. Usually I just hide it in the dishwasher after breakfast (when it inevitably gets used) and tell them to pick different plates for the other meals.
Rachel sure felt bad about fighting with Miriam over the plate when she ended up back in the hospital that afternoon. Sheesh. The moral of this story is to not have dumb fights. Then you don't have to feel bad.
Here's a picture that Miriam drew tonight after my mom went home (and the girls still weren't asleep). I took her out of the room so that Rachel could have some alone time to try to fall asleep. It didn't work. Instead she was just miffed about the injustice of being sent to bed while Miriam was allowed to stay up and colour.
Anyway, it's a picture of her, me, Rachel, and Naanii (who unfortunately is missing a head). She drew glasses on herself (she's the small one on the left). She thinks glasses are cool. Harry Potter has glasses. Mommy has glasses. So basically all the cool people she knows have glasses. 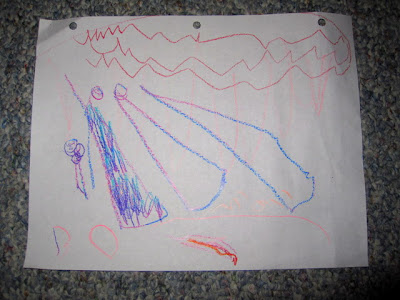 I used to think glasses were cool, too. Little did I know...it's actually cooler to be able to see.


The wavy lines on her picture are words that she spelled all by herself. And the pink streaks in the background are "thunder like Harry Potter's scar."


My last random story takes place on Saturday when Miriam was chat-chat-chatting all the way to Salt Lake and we go stopped at a red light next to a milk truck. It was a huge milk truck with a semi-truck-like cab and two large, cylindrical trailers full of what we assumed to be milk (since the truck was branded with Dairy Farmers of America).

"What do you think is in that truck?" we asked Miriam.

I thought that was a pretty safe guess since she could see the guy and he was obviously toting some...stuff.

Alright, now I need to pack a diaper bag and give my baby a dose of medicine and then I'm off to bed.
Posted by Nancy at 1:47 AM