This morning the girls were looking out the window, watching Daddy drive away, when they noticed some birds in the yard enjoying Grandma's callery pear tree. A few of the birds were robins and one of them flew right up onto the deck, which the girls got really excited about because they'd "never seen a robin that close up before!"

They've since been pretending to be a robin (Rachel) and a duck (respectively), making nests on the living room floor and so forth.

She drew a beautiful picture of their game—she's the robin, sitting on her nest (all seven of her eggs have already hatched into young robins). Miriam's the little duck in the pond. There's a butterfly and a dragonfly in the sky, some flowers on the ground. It's a beautiful picture. She's very proud of it. 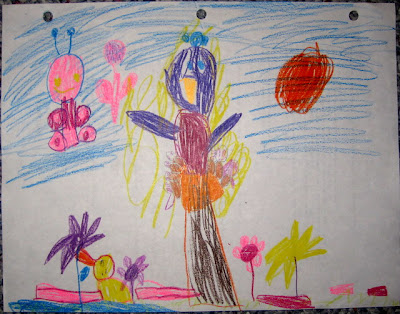 I'm having a hard time thinking about Miriam last February, when we were enjoying looking out at the robins together and all she could say was "Buh! Buh!" and she wasn't running around the house saying, "Mommy! Come see this! There's birds outside! A robin, a robin, a robin! And one's on the deck!"
Yup. A year can change a lot of things.
Good thing we have a new baby coming because my baby Miriam is hardly a baby at all anymore.
Miriam's been trying to draw a duck picture this morning and although she was satisfied with her work, Rachel was not. Quote: "That doesn't even look like a duck, Meme." 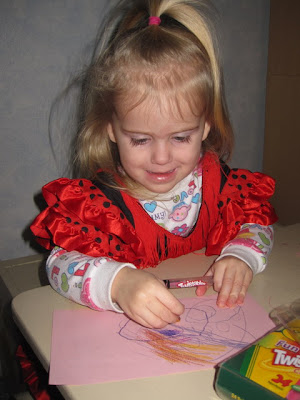 So Rachel drew Miriam this picture of a mother duck, and her four baby ducks swimming after her. It's sunny and raining at the same time, so there's a rainbow streaming down from the sun. 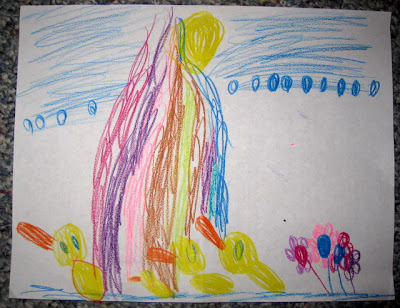 And then Rachel asked that I take a picture of her and smiled sweetly at the camera but by the time I had snapped the picture her face had morphed into this: 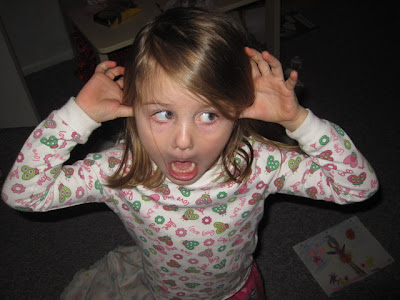