Just another day at the hospital

My dear little girls woke up at 8:00 on the dot this morning. Part of me was grateful because it meant that I was able to call the doctor's office first thing this morning. Part of me was wondering how they managed to wake up, considering Rachel was up until 10:00 and was up once in the night and Miriam was up until midnight and was up and down like a yo-yo.
Miriam seemed fine but I was supposed to get her in for a follow-up appointment. Unfortunately her pediatrician was booked through the day and would only be able to see her at 10:00 in the morning, which was hardly a 24-hour follow up appointment. I finally got through to the nurse who quickly reviewed the paperwork the ER had faxed to our doctor and conferred with our doctor about whether or not a follow-up was really necessary. Our doctor said that since she seemed better and wasn't running a fever he probably didn't need to see her—and we could just remove her IV line by ourselves.
I said that probably wasn't going to happen.
She hates the IV line and has been carrying on about how painful the "beetle" in her arm is and hasn't been using it at all. We had to hide her arm from her all day so that she wouldn't cry. There is no way I'd be able to get her to let me unwrap her bandage and pull the IV out unless she was unconscious or something.
Alternatively I suppose I could have peeled the tape off and let her rip the IV out herself. She probably would have done that.
The nurse said I could come in that afternoon and she'd take the IV out for us.
We got breakfast and then I popped "Snow White" on and we settled in to what was supposed to be a relaxing morning. However, through the course of the movie Miriam got hotter and hotter and hotter and when it was over she wouldn't even stand up.
"I think your fever's back," I said. "Let's get you some more medicine."
I hadn't given her any medicine since 4:00 that morning because her temperature seemed to stay around 97.0 and I didn't feel that really warranted any more fever reducers. She didn't seem to be in pain, either, but was playing around until about halfway through the movie when all of a sudden all she wanted to do was snuggle.
I put her in my bed and checked her temperature. 104.0 again.
I gave her some medicine and put some wet cloths on her forehead and tummy—she couldn't have a bath because of the IV line. 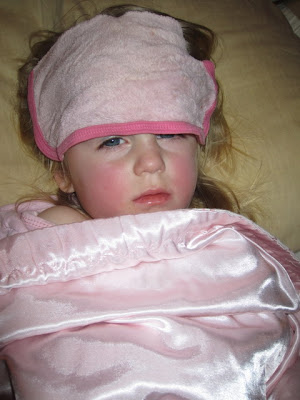 Ten minutes later her temperature was 104.1. I put some vinegar-soaked cloths on her feet (at the advice of a friend). 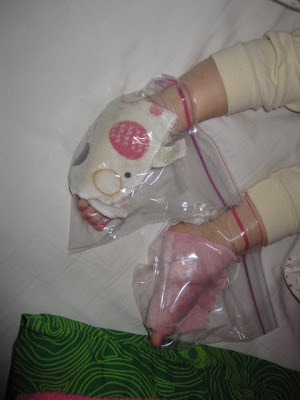 Ten minutes later her temperature was 104.2.

I called the pediatrician's office. They said I could come in but that they didn't know what they could do because she probably needed more IV fluids and they aren't equipped to do that. I should call the ER.

I called the ER and they said that I could come in but that I should probably stop at the pediatrician's office first.

No one is allowed to give advice over the phone and all I wanted was to have someone tell me what to do. So I chatted with Andrew online and asked him to come home.

By the time Andrew got home (half an hour later; one our after I gave her the fever reducer) it was still over 104. Rachel had been picked up by a friend. We had another friend come over and help give Miriam a priesthood blessing and then we went down to the pediatrician who sent us immediately to the ER. For some reason we feel like we need permission to go to the ER—like it's a last resort. I know that it is a last resort but because we're on Medicaid we really don't want to seem like we're abusing the system. Granted we've been on Medicaid for almost two years and this is only the second time we've gone in but it's the second time in two days!

So, more blood work and more IV fluids and more antibiotics and more popsicles. The doctor said her blood count was better so that was a good sign because then we can still hope it's a bacterial infection somewhere in her body. Otherwise it's a virus. So, he discharged us, several hours later, with a fever of 101 (instead of 105) and a prescription for antibiotics. Her cultured blood work should be in tomorrow and he sent her urine off to be cultured, too, so we should have the results for that soon, too.

I asked him if we should just keep loading her up on tylenol even if she isn't running a fever—he said we probably should because she keeps spiking—but just for 24 to 48 hours.

Hopefully we'll be able to keep her temperature down. I don't care if she has a fever...I just don't like it to get so high. And apparently neither do the doctors/nurses at ou InstaCare/clinic because they keep just sending us to the ER.

So, tomorrow looks like it will be another day full of popsicles, tylenol (Miriam picked bubble gum flavour—yuck!), ibuprofen, and movie-watching. And hopefully we'll just be doing that from the comfort of our own home!
Posted by Nancy at 11:37 PM