First of all, I'd just like to publicly announce that not a single drop of blood was spilled today. It's an Ash Wednesday miracle! And now we can start one of those cool counter things:
Heissatopia has gone 1 day(s) without a lost-time accident!
Safety first. That's our motto.
To celebrate our accident-free day we went to the playground. It was so warm out when we left the house (54°F/12°C) but then some clouds blew in and covered the sun and it turned blustery and chilly. I don't know how cold it got because instead of checking the temperature when we got home I made some hot chocolate and apple cider to help us warm up. We were only out for about an hour but we were freezing when we got home.
It was worth it though, I suppose. The girls got lots of energy out while doing their laps up to the slide and back down again. That's pretty much all they did.
Miriam was afraid of the tunnel again. Every time we get to the park after a long spell of not going to the park (this is the first time we've gone down to the this particular park this year) we have to reintroduce her to the tunnel. She cried about it today until I agreed to go up with her.
The second time I made her do it by herself and she got up this far... 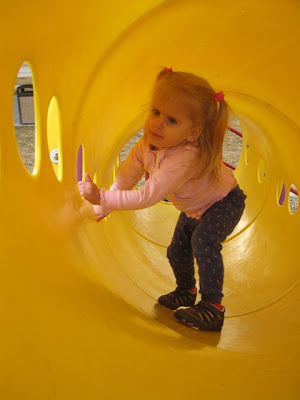 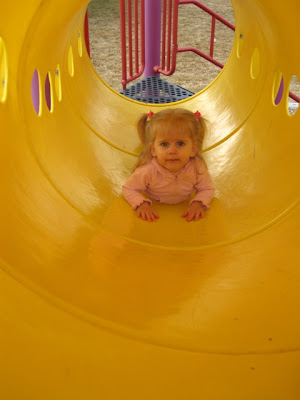 By this time Rachel was bored of waiting her turn and pushed past Miriam. This is Rachel making fun of Miriam near the top. "Not I cannot do it!" she's saying while grunting. But then Rachel did do it because Rachel can. I think this got Miriam's little wheels turning because if Rachel can do it after having such a hard time (even if the hard time was feigned) then of course Miriam should be able to do it, too! 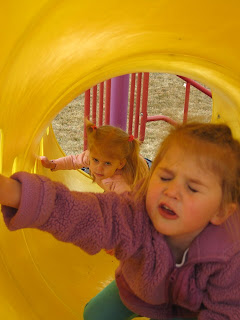 Hey—Rachel did it! What a surprise! 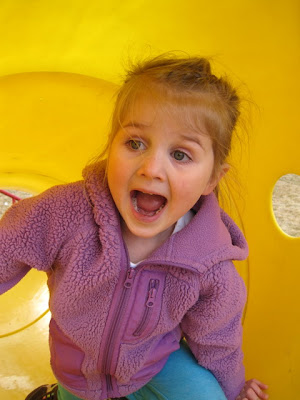 And then Miriam got the courage to pull herself over the last curve of the tunnel, too! 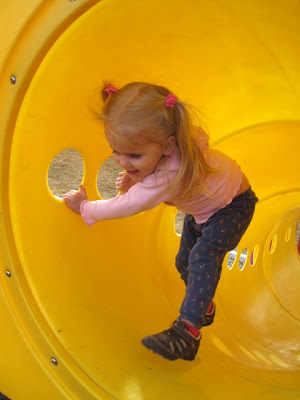 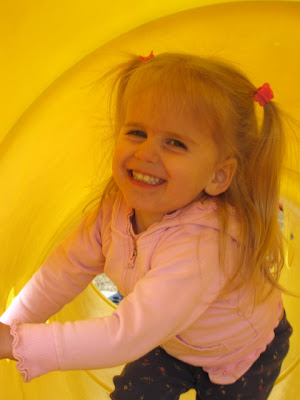 She was so proud of herself.
And she looks like someone in this picture but I can't quite put my finger on it. Sabrina...only blonde? 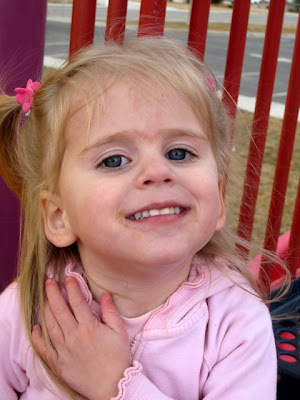 And I hope her little bindi/zabiba stork bite (birthmark) goes away before she starts school or gets married—hopefully by the time she turns three, really. She's beautiful with it, don't get me wrong, but I just feel a little bad that it practically takes up her whole forehead. It seems really prominent in this picture. Is it always that visible? Maybe it's just because she's cold—I found a bunch of cases online where parents spoke about their children's stork bites appearing darker when their children were cold (or angry; I already knew about the angry part though). No official medical statement or anything, but a lot of anecdotal evidence.
Anyway...the girls had fun going up and down and up and down and up and down the play structure after Miriam figured out how to get all the way up. 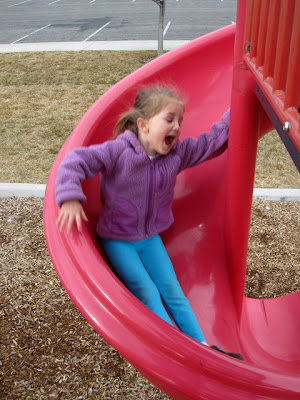 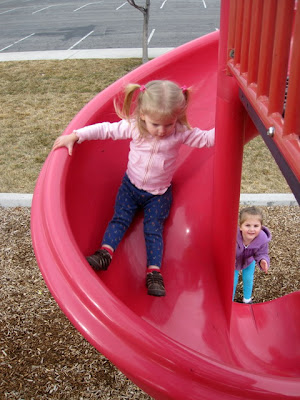 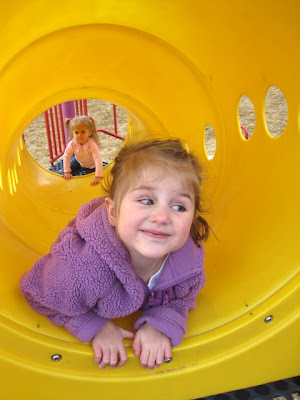 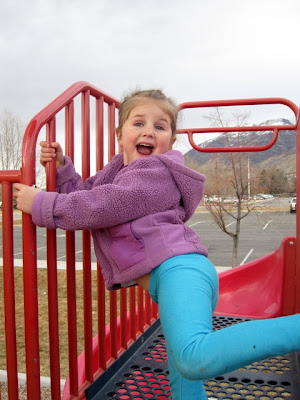 Rachel taught Miriam the joy of sliding down in a train (I even joined in once) though Miriam didn't seem to understand the "joy" part of it. 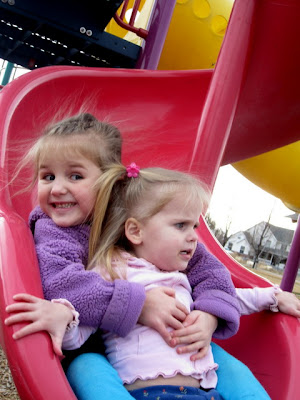 She had a bit more fun being the caboose. 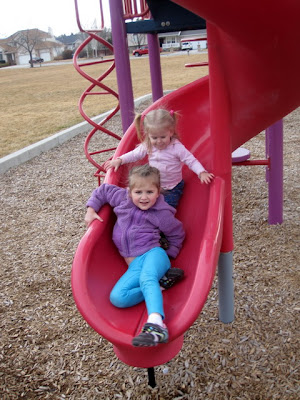 Miriam also taught herself how to swing on the bar at the top of the slide before sliding down. This caused a few head bonks (but no blood...so we're good). 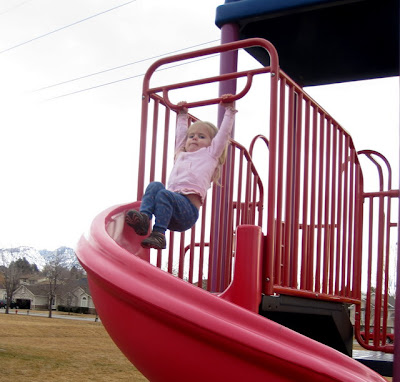 When I was so cold that I could hardly stand it I told the girls it was time to pack up and head home.

"But, Mom! All we've done is slide!" Rachel whined.

We'd already been there for 45 minutes! I fail to see how it's my fault they spent 45 minutes on the slide and no where else! Still, I told them to hurry up and do something else. They chose to play on some climbing thing. 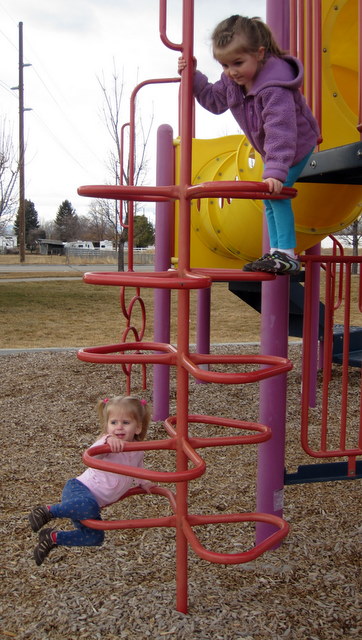 Rachel scaled it in no time flat, which was kind of a surprise because she's always been a little nervous about it before. "I'm growing up, Mom," she explained when I remarked on the change in her approach. It's nice to see some confidence on the playground because when we first got to America there was no confidence—only tears. 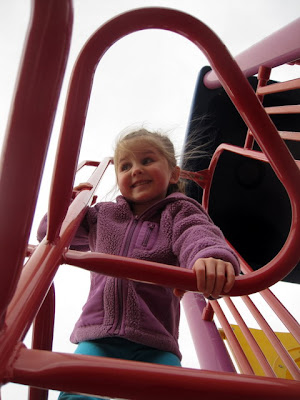 Miriam was kind of just stuck on the bottom rung the whole time. She'll figure it out eventually. 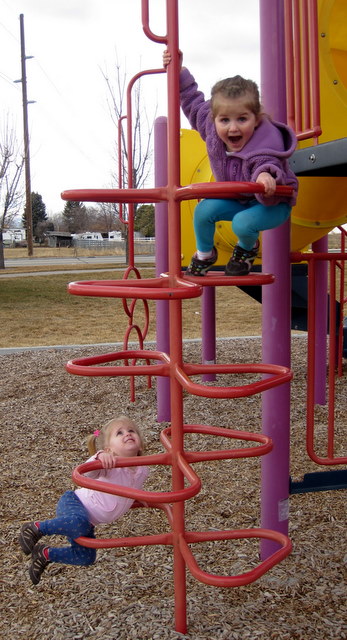 She wanted me to help her climb it but I said I was too cold and we had to go home. And then Rachel said, "But, Mom! Can't we just slide once more?"

"How about twice more?"

"How about Miriam gets one more slide and you can slide until I get her buckled into her stroller and have everything packed up?"

"Once I have everything ready though I'm just leaving. I'm not going to wait."

But I think that last part scared her a bit because she only went down one more time after she and Miriam had their "last" slide. Then she ran to catch up with us. 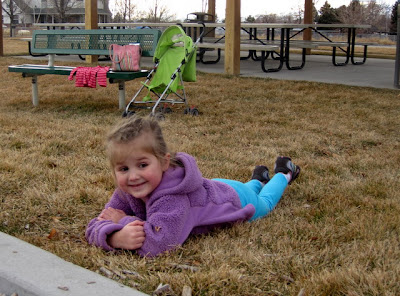 Later, Grandma took us out to Arctic Circle for dinner, a rare treat, and the girls got to play on the indoor playground (which was much warmer). That's where Miriam got her big head bonk (from swinging on the bar at the slide (and letting go and landing on her back)) but other than that we made it through the day without anyone getting hurt. Compared to the past couple of days today was awesome!
Posted by Nancy at 12:51 AM