Tonight was the 2012 Administrator of the Year/Graduation & Awards Banquet for the MPA program. We went last year because Andrew won the Garth N. Jones Writing Award (his paper is due to be published this month, actually). This year, while we certainly planned on attending the banquet since part of its purpose is to honour the graduates, Andrew wasn't planning on submitting anything to the contest because he'd already won once. But he was in a group with Jenny and Anthony and they wrote a paper together and Jenny wanted to submit it.
So on March 12th—the day submissions were due—at 12:30 PM Andrew started chatting to me on IM. Here's our conversation, for your enjoyment. You can ignore the highlighting on "Andrew" and "edit;" those were my search terms and I'm simply too darn lazy right now to remove all those tags from the code.
12:30 PM Andrew: Yo
You there?
12:56 PM me: Now I am.
We were at lunch with your mom. [A Relief Society/Friends lunch club]
Andrew: Ah, yeah.
Do you want to quickly edit something for me?
How was lunch, by the way?
me: Sure.
It was good.
12:57 PM The girls both developed mysterious stomach aches that disappeared the minute we agreed to go home. :)
Andrew: They weren't having fun?
me: Apparently grown ups are nerdy.
And boring.
And lame.
12:59 PM Andrew: Totally.
I just sent you the Google Doc link.
me: I see it.
Andrew: We're going to submit this as a joint Garth Jones paper.
Just for the heck of it.
me: :)
Andrew: The deadline is 5 PM today, so yikes.
me: haha

Andrew: We decided like, um, 10 minutes ago to do it.
1:00 PM me: A group paper?
Andrew: Yeah.
Me, Anthony, and Jenny Kellis.
1:06 PM me: Can I make changes directly to it?
Or just comments?
Andrew: Oui.
Change away.
me: Okay.
Cool.
I spent the whole afternoon editing the paper. Andrew and I had just finished going through it together one last time (I love Google Docs because we went through it together but he was at BYU and I was at home) about fifteen minutes prior to the 5:00 deadline. It was kind of insane.
Truthfully, I didn't expect them to win. The paper wasn't that great—it was actually pretty rough—and Andrew admitted that they had received the lowest grade in the class on that particular paper. It definitely had potential, though, and you know what they say: There is no great writing, only great rewriting.
Or did you know that they say that?
I grew up hearing that (and living that) but I said it aloud at the dinner table a couple of nights ago (after we'd heard that the paper had been selected) and neither Andrew or his parents could fill in the blank.
"There is no great writing..." I started and then paused while I waited for someone to finish the quote.
No one did. It was kind of a buzz kill.
"Only great rewriting! Seriously?" I gasped. "You've never heard that?!"
How have I never said that in the six years we've been married (and to think I've been editing his papers that whole time)? Apparently the quote can be attributed to Justice Brandeis. I have no idea who that is.
Anyway, the paper won so all the rewriting we did certainly paid off!
Congratulations to Andrew, Jenny and Anthony for winning the Garth N. Jones Writing Award (once again, in Andrew's case). 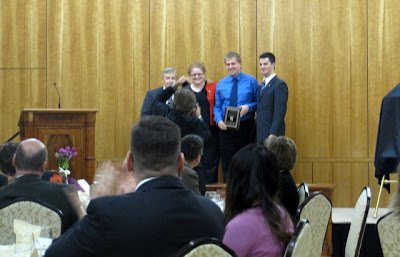 Garth came and found us after the program, which was so kind of him since a lot of people wanted to talk to us. We really weren't expecting to be so...popular. 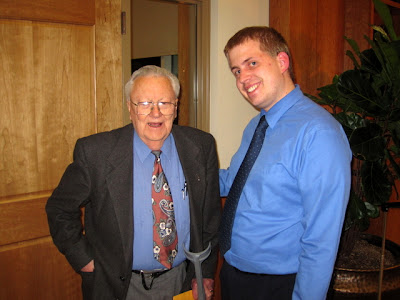 And here are the three happy winners: Andrew, Anthony and Jenny 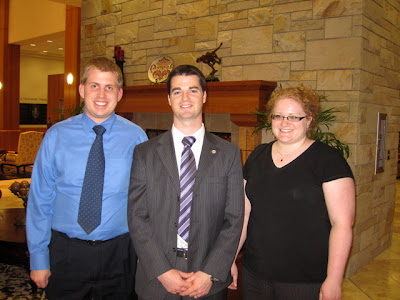 There's a bit of a money tied up in the writing award and it splits three ways fairly evenly, save one penny. Andrew said he'll claim that extra penny to pay for my services.
I'm glad to know I'm worth so much.
Jenny had to fight quite a bit to get the paper submitted in the first place—she had asked if a group paper could be submitted and was told yes but when they went to hand it in they were told no. Jenny pointed out that in the "real world" papers are co-authored all the time. They weren't expecting to have a group win—no group has ever won before—and are thinking about stating clearly that only single-author submissions will be allowed in the future. I think that they should rethink that rule because the majority of the papers Andrew had to write for this degree (that were scholarly not merely introspective) were group papers. I think they would get a healthier number of submissions if they accepted group papers, but that's just my opinion. 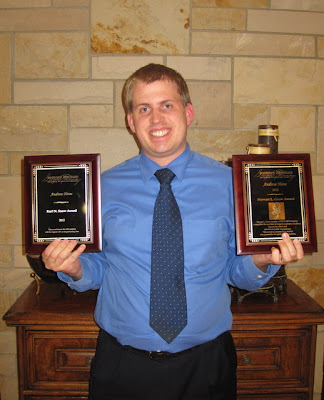 Like I said, we were not quite expecting to be as popular as we ended up being this evening. Andrew was called on four times. There are only three awards to win, minus the Professor of the Year Award, which he was exempt from for obvious reasons, and the recognition for being in the top 10% of the class, which he was not recognized for. He was, however, awarded the Karl N. Snow Award, which is "presented annually to the graduating student who has achieved the highest academic record." Andrew and his friend Ben both have a 4.0 GPA so they both got that award (which technically means they're in the top 10% of the class but I suppose they don't need to be recognized for that after being recognized for having the highest GPA).
"Karl N. Snow," the program tells us, "was one of the early leaders in establishing the MPA program at BYU and was a founder of the National Association of Schools of Public Policy and Administration."
We thought we were finished after that award was presented when Carolyn Grow Dailey got up to announce the winner of the Stewart L. Grow Award. She talked about her father, who was the "founder of the MPA program at Brigham Young University, was known as a friend of students, a loyal colleague, and an example for all to emulate. He was devoted to public service and management excellence in government." He also coined BYU's motto, "Enter to learn, go forth to serve" (which we did not use on Andrew's graduation announcement, but which is an excellent motto).
This award is "presented in his [Stewart L. Grow's] name and memory to the graduating student in the MPA program who best exemplifies the traits of integrity, academic excellence, concern for others, and devotion to public management that characterized Stewart Grow's life."
Carolyn gave a beautiful speech about her father, who truly lived by the phrase "enter to learn, go forth to serve." She said they would often have guests—exchange students and people from all walks of life—at their table at dinner and her father was always teaching. And always serving.
I should have been recording her speech because suddenly it turned from a speech about her father into a speech about my husband! She shared some general facts about him (which clued us in that it was him) and then shared some really touching comments from his peers (they voted to give him the award). I wasn't recording her speech though because, honestly, Andrew'd kind of already won two awards and we fully expected the last award to go to someone else. He, personally, thought she was talking about Dominique at first.
Andrew, red-faced, went up to receive his award and all the MPA students gave him a standing ovation.
I was choking back tears.
And I only partially blame the pregnancy for that.
He's really an amazing guy and I'm so lucky that he considered the choice to marry me easy (while the choice of where to go to grad school was difficult). It was pretty easy for me to decide to marry him, too.
We didn't get to see Carolyn after the program but hopefully we'll meet up with her some time soon.
The last time Andrew was called to stand up was to get his thank-you gift for being on the MPAA (that's the Masters of Public Administration Association not the Motion Picture Association of America). He got a BYU blanket, a piece of BYU Creamery fudge, and a water bottle (and he's really excited about that water bottle, let me tell you).
After the program we had to go have Andrew's picture taken and then we rushed home to relieve my kind, wonderful mother of our children (who never fall asleep. Sheesh—we didn't get home until 10:00 and they were still up and my mom was patiently telling them embarrassing stories about herself and all of her children (the makings of fine memories)).
It was a pretty overwhelming evening for everyone, I think (me, Andrew, and probably my mom (having to tell stories until 10:00 PM)).
I haven't even touched on the keynote speaker, The Honorable Sheila C. Bair, who was the FDIC Chair from June 2006–July 2011. She gave a fantastic speech and seems like such an interesting person. Andrew was supposed to go on a tour of campus with her today but that got cancelled because she had to do an emergency conference call (she's that important). Maybe I'll write about what she said later. If not maybe I should write down that she was named the second most-powerful woman in the world two years running by Forbes magazine (after Angela Merkel, the chancellor of Germany). What an honour it was to hear her speak!
Oh, and I'll just add (as my final note of the evening, I promise) that the dessert was so utterly fantastic that it was probably the highlight of my whole day. It was divine—an angel food cake filled with some sort of lemon filling, topped with whipped cream, blueberries, and a mint leaf, sitting on a drizzle of blueberry syrup. It was perfect.

And I only partially blame the pregnancy for feeling that way.
Posted by Nancy at 2:37 AM