I'm pretty sure Miriam thinks Benjamin is either bored or boring because she is constantly inventing ways to get him to play with her. He can't even get away from her when he's fast asleep—when she often will get right in his face and 'ooga-booga' at him. So far he hasn't accepted a single invitation to play, though he will smile for her occasionally.

A couple of days ago Miriam was extra motivated to play with Benjamin. She 'read' him multiple stories and jiggled a wide variety of toys in front of his face. 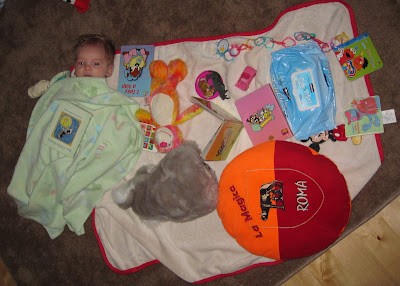 No matter what she did he still did his same old thing—he pumped his arms and legs and expressed his excitement by breathing slightly faster than normal. He even grinned a couple of times and let off a few contented shrieks. Miriam was unimpressed with his efforts to reciprocate her playfulness, however, and left him lying with this pile of hud. 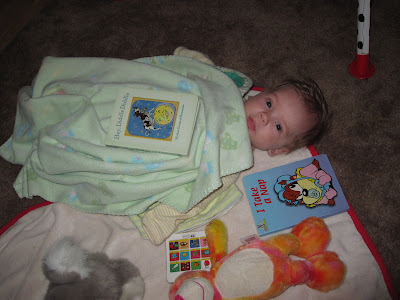 When I asked her to help clean up her mess she was most distressed that Benjamin didn't have to help. After all, he'd been playing with it, too!
Posted by Nancy at 11:32 PM