This year Andrew and I held a competition to see whose birthday celebration could be the lamest. There are no winners in a contest like this but I think we both tied for second place (which as we all know is just a fancy way of saying first loser).

Let's recap my birthday first, shall we? We spent the day at the hospital. Andrew packed some stuff and let me nap. And then we ate cupcakes that someone dropped off with dinner the day before. Except for me, that is, I got a fancy cupcake from the Sweet Tooth Fairy, courtesy of Karen. I think we might have had a more jovial celebration at my parents' house later...

Andrew's birthday went like this: Andrew got up and went to class. I found out that our good friend had died the day before and spent the morning crying because I still cry at the drop of a hat. Miriam and I made fig newtons while Benjamin screamed. I forgot to put the last 3/4 cup of flour into the dough. Miriam stirred the fig jam into the bottom layer of dough. It was a bit of a fiasco but we did end up with newtons of sorts to have as an after school snack...complete with birthday candles and song. We had tacos for dinner; Andrew did most of the work. Andrew went to cub scouts. He came home and revolutionized our world with Bojangles. We watched an episode of The West Wing. This morning I let him sleep in for a while since he wasn't able to on his birthday.

That about sums it up.

Both days were fairly lame. Sometimes I think that's what being a grown up is all about—celebrating the mundane with the mundane. There's nothing exciting about turning 27 (like I did) or 28 (like Andrew did) and life's too busy to throw a huge shindig. But we did take time to celebrate, and that's the important thing. 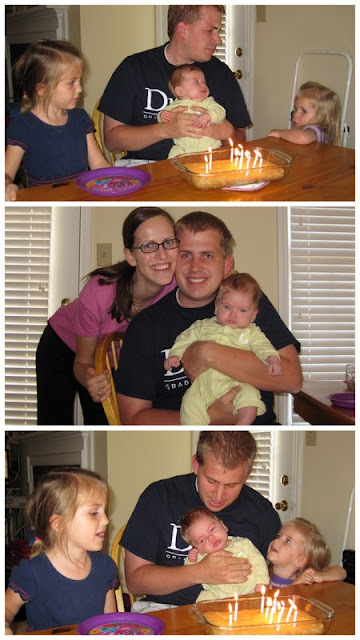 That said, allow me to gush over my amazing husband for a minute. I think that part of the reason I was so upset about Brother Bestor passing away is that he and Chris were so amazing together. They were one of those adorable couples that you'd look at and say, "D'awwww!" about. They'd been through many amazing adventures, difficult trials, and mundane moments together but you could tell they still were clearly best friends. I think my heart broke for Chris yesterday, that's all. I believe families are forever and so does Chris, but trying to imagine living life being separated my best friend is almost impossible (I can hardly last three weeks without him!). 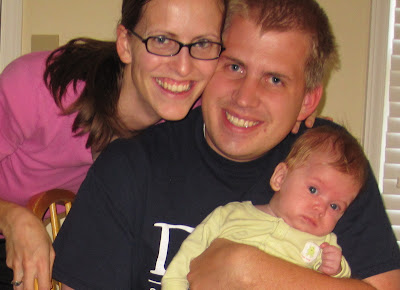 I'm so lucky to be married to someone who understands me so completely, who laughs at the same things I find funny, who is patient with my shortcomings, who helps me be a better person, and is willing to grow old with me. He's my husband, my hero, my sweetheart, my best friend, and he's perfect for me! Hopefully one day we'll be one of those (admittedly older) couples that a young married couple looks at and thinks, "I want to that kind of relationship."

On a less gushy note...Bojangles'!

We've been driving past this restaurant for about a month now and every time we do we snicker, "Haha—Bojangles'—haha!"

Of course, we'd never been there—if I told you how much money we have to spend on food this month you'd probably go fix yourself a snack because it really isn't much—but the name is so quintessentially-Southern funny that we couldn't help but laugh about it.

And then last night Andrew's co-cub leader brought Bojangles' Bo-Berry Biscuits as a treat for the boys and they were so good that Andrew stopped to pick some up on his way home from cubs and...oh, man!

They were a delectable way to make up for the failed fig newtons I forced on Andrew earlier in the day.

Best part? They're like 88 cents each, which is totally affordable.

Now that we know that Bojangles' has amazing biscuits we might just stop making fun of their name. Then again, we might not...because this friend of mine teaches ESL and was asking her kids to tell her what their favourite restaurant was. There are a lot of Spanish speakers here so there were a lot of native Spanish speakers in her class and the kids kept telling her, "Bo-han-gles! Bo-han-gles! Bo-han-gles!" And she was like, "What?!" And they were like, "You've never been there? They have the best Bo-Berry Biscuits!" And she was like, "Oh! Bojangles!"

It's possible we'll call it Bo-han-gles for the rest of our Bo-Berry Biscuit days. I hope they don't mind.
Posted by Nancy at 11:05 PM