I've had several people ask me if/when I was going to begin elimination communication with Benjamin.   The answer to that is...yes, now. 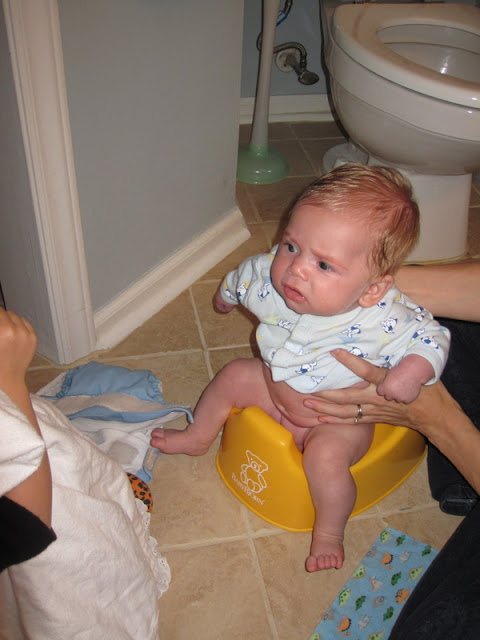 We started with Rachel when she was about five months old, when I'd had it with disposable diapers because she would have major blowouts multiple times a day. I figured if I was constantly scrubbing poop-stained clothes that washing cloth diapers couldn't be much worse. Then I took it a step farther and thought it would be even better if we could cut out the middleman and get the poop straight in the toilet. And that's where my research began. I didn't read any books, but I did look at some online resources. We kind of just experimented with it and what we did seemed to work so we went with it.

When Miriam was born we started elimination communication with her as soon as we came home from the hospital. We' already done it once so I figured we could do it again. I was a little nervous about holding such a new baby over the potty but was surprised to find that starting elimination communication was actually easier with a brand new baby than with a five month old. We decided that we'd do the same thing with our next child but....

Those five weeks he spent in the NICU pretty much threw our EC-from-birth plans out the window. When he came home he was on oxygen (which gave us a 20-foot leash) and was also hooked up to an apnea monitor (which gave us an even shorter leash). The very idea of trying to make a baby hooked up to a computer and oxygen machine use the potty was ludicrous, in my opinion. So we didn't start ECing when we came home from the hospital and by the time Benjamin was off of oxygen we only had a couple of weeks until we were moving and then we moved and then we've been trying to get settled. Now we're somewhat settled and are running out of the disposable diapers we were gifted, so we'll be starting Benjamin in cloth diapers pretty soon, which means that I'll be wanting him to feel comfortable on the potty so that he'll poop there instead of in his diapers. Savvy?

Let me sum up: We didn't start elimination communication with Benjamin until this week because this summer just about killed me (and when you're just about dead you don't care where the baby is pooping).

So far, Benjamin isn't thrilled about the potty but he does alright if we entertain him well enough (not too much and not too little). Fortunately I have a couple of willing entertainers in my house who will sing or shake rattles or make funny noises with their mouths. Benjamin has gone pee in the potty several times—a couple times in the big-person toilet and a handful of times in his own little potty chair—but we've yet to catch a real BM. I think, though, that once he figures it out he'll love it because he hates having a poopy diaper. I mean, he's really impatient when his diaper is messy and starts screaming about it almost as soon as he finishes making the mess (sometimes sooner).

He's still just a little guy. We had him try on a couple different diapers today. Grandma/Karen found a great deal for cloth diapers online and bought us a set. They're lovely diapers—they're super soft inside and they adjust from newborn to toddler size with snaps—but they're still way too big for Benjamin no matter how tight I do up the snaps. 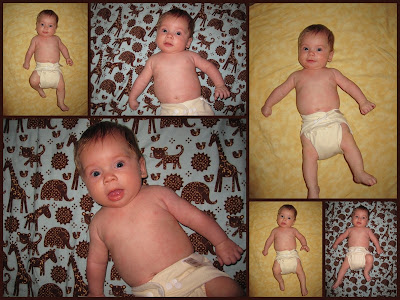 I put him in one of the new diapers (took a billion of pictures of him) and then left him kicking on the floor while I washed my hands. By the time I came back he had nearly kicked right out of the diaper—it was hanging out down by his knees and he was enjoying the breeze!

We'll have to hold off on this kind until he's bigger. Until then we'll have to rely on our previously collected stash—the BumGenius kind fit him fine at the smallest setting and there's always the trusty pre-fold (if only I could find my diaper pins...).
Posted by Nancy at 12:57 AM