This is how our weekend began: 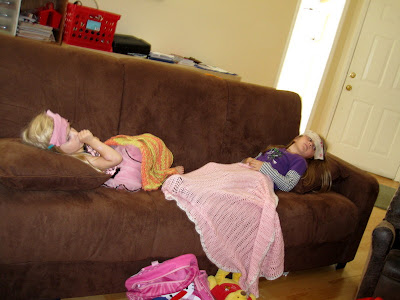 Rachel came home from school exhausted. All three of us girls are sick but Rachel's still been going to school because I don't think you can stay home with a cough...for a week...so off to school she goes. Friday afternoon was filled with cartoons while Daddy painted the trimming on the shed and I made dinner. Our traditional Friday pizza night was cancelled in favour of soup and crackers. I made crackers for dinner—like, from scratch.

We went grocery shopping on Saturday after Andrew spent the day painting the shed and watching the girls while Benjamin and I went to our stake women's conference. Benjamin sure was happy to see his daddy after spending all day with a bunch of women! 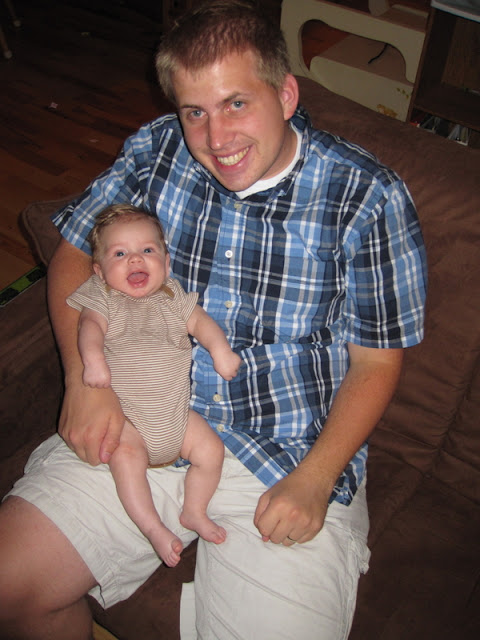 Our shed looks great (I haven't taken pictures yet, but I will) though the house was a complete disaster by the time I got home. That's pretty par for the course, isn't it?

Benjamin slept all through the night on Saturday. He went to bed around 9:00 at night and didn't make a peep until 8:30 the following morning. I was shocked and thrilled and engorged. It would have felt nice to get a full night's sleep, I'm sure, if I wasn't sick. Even though I didn't have to get up once in the night I still woke up feeling icky—and clutching my water bottle (because my throat is killer sore). It also must have been some kind of a fluke because he was up every two hours last night begging to nurse (I think he might have a sore throat, too).

Benjamin's getting super big. He's really starting to fill up his bassinet (for reference's sake, here's Benjamin on the day he came home from the hospital...and again on his due date). 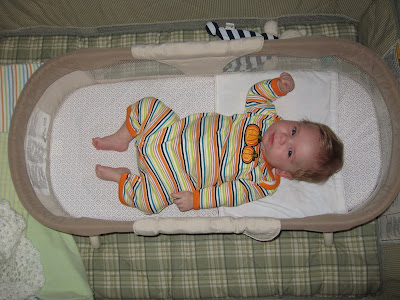 He used to be such a tiny blob of a baby but how he stretches out and almost takes up the whole thing. We'll have to train him to sleep without it, especially because he's rolling a lot now (both ways as of this weekend). I'm not too worried about it though because he's a pretty calm sleeper (unlike Rachel who would ping pong all over her crib).

Sunday was busy day of Skyping. We Skyped with my parents and brothers, with Auntie Josie, with our friend Emily and her family, and with Grandma and Grandpa. The girls were pretty excited and wound up after seeing all those people that they miss so much.

Because I wasn't feeling too great this weekend we had a bit of trouble finding our clothes on Sunday morning. I had washed and dried all the laundry but I hadn't folded any of it. I had to dig through four loads of laundry to find Benjamin's churchy overalls but I finally found them and got this baby dressed about five minutes before we had to leave. We didn't leave for about 10 minutes after that. How we managed to leave late for church when we meet at 2 o'clock in the afternoon is beyond me...but we did it! 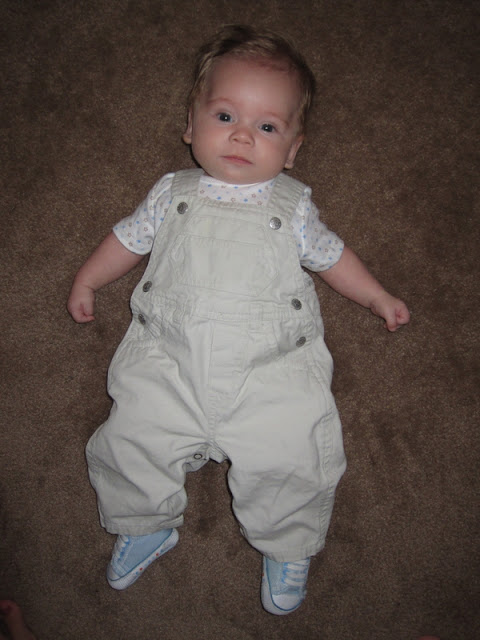 He's such a cute little guy. 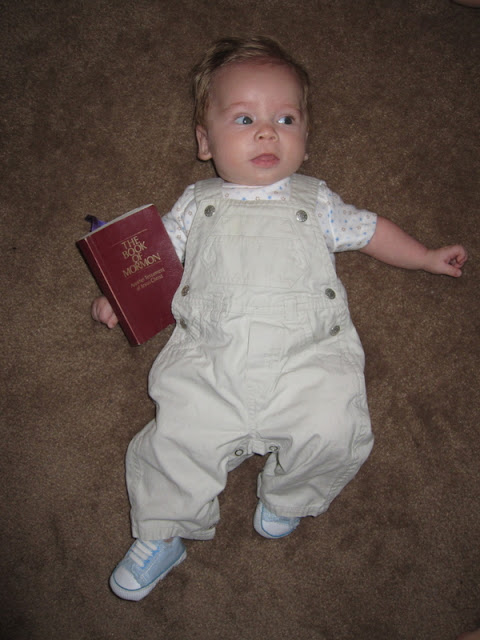 He's looking to the far right of this picture because Miriam is over there bouncing up and down begging to have her scriptures back (Benjamin is "holding" them; and they're technically my scriptures). Miriam had to come to Relief Society with me because she was still coughing on Sunday and kids can't go to nursery if they're coughing. She was so excited for a while and was actively listening. She kept making remarks through the whole lesson.

At one point they handed out the new For the Strength of Youth pamphlets and when the person handing them out walked past, Miriam held up her Book of Mormon and Children's Songbook and announced, "I've already got one!" which made everybody smile. And when someone was telling a story about a cohabitating couple who wanted to join the church but had to get married before they could, Miriam chirped out, "Hey—my mom and dad got married, too!" which made those sitting around me giggle.

It was a long three hours at church with no rest from my littles. How grateful I am for nursery and primary!

Miriam pouted. "I didn't learn anything today!" she moped.

"Didn't you go to Mommy's class?" Andrew asked her.

"That wasn't a class!" Miriam said.

"It was just a room that we went to where we learn things."

"Well, what did you learn in that class?"

"I learned about sharing the gospel," I offered.

With the number of relevant comments she made during the lesson I thought she'd be able to think of something she learned. But I guess not.

We came home to a wonderful crock pot dinner. I've gained a new kind of appreciation for my crock pot now that we have church from 2–5. It's like a really amazing friend who stays home and cooks a hot meal for us...only different because it's really me cooking the meal, only time-delayed. Maybe it's more like one of my split personalities staying home to cook a nice meal for our family.

My children think the crock pot is plain, simple magic.

When we were Skyping with Josie I looked at the clock and realized it was high time to go.

"I need to go make dinner," I said (even though it wasn't even noon yet).

"No, you don't!" Rachel said. "It's Sunday! We're having a crock pot dinner! We just go to church and come home and...there's dinner!"

"Right," I said. "And how do you think that dinner gets in the crock pot?"

"No, it's me. I put the dinner in the pot. Then I set the pot for how long I want it to cook. And then when we come home there's dinner."

I think I kind of killed the magic for her.
Posted by Nancy at 10:04 PM