The biggest caterpillar I've ever seen!

While Andrew was mowing the lawn this morning he came face to face with the biggest caterpillar he'd ever seen. It was dangling from whatever kind of tree is in our backyard (some kind of pine), munching on its succulent leaves. He finished mowing the lawn and then called the rest of us out to see it.

It was the biggest caterpillar any of us had ever seen! It was ginormous! And hairy! And a little lethal-looking... 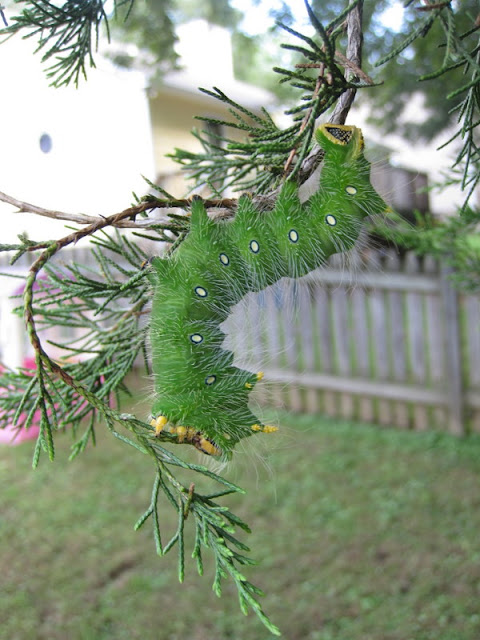 We could see his jaws gnawing at the tree while his six stubby arms shoved the leaf into his mouth. No magnifying glass required to study this caterpillar! 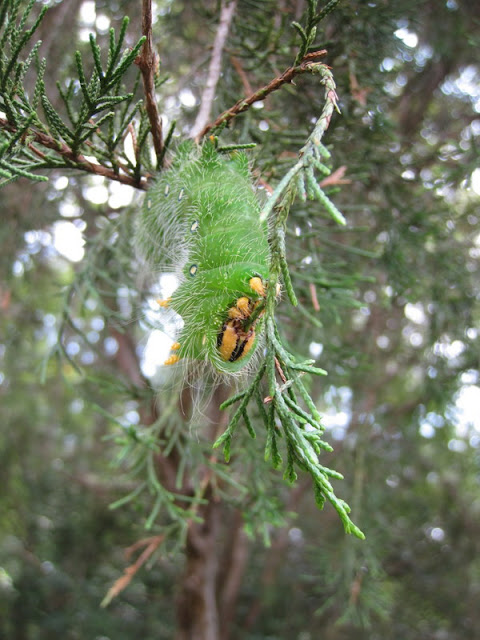 Before we moved out here my dad told us a story about a gigantic housefly that he'd caught when he was stationed at Camp Lejeune. He told me that it filled a dixi cup. I totally didn't believe him. And I still don't...because I've seen houseflies here and they're just regular-sized...but I do believe that he caught a flying insect large enough to fill a dixi cup because I've seen them. I think what he actually may have caught was a cicada.

The cicadas here are different than the ones we saw when we were in Nauvoo (which were periodical cicadas (or magicicadas)). Here we've only seen the annual cicadas (or tibicen).

The magicicadas spend up to seventeen years underground before they emerge as adults. They just burrow around nursing off tree roots and then they all mature at once and swarm out of the ground, surviving predation due to their huge numbers. They then breed, lay eggs, and die. The next batch of magicicadas emerge more than a decade later. So when we saw that cicada in Nauvoo we were looking at a bug that was likely around 17 years old. That's crazy!

The tibicen, which we have here, only stay underground for around three years before they surface—and there's a new batch of them every year. They're incredibly large, though—larger than the magicicadas we saw in Nauvoo—and resemble monster-sized houseflies. They can be up to two inches long!

They're noisy, too. The forest in our backyard (and everywhere else in the city) used to be buzzing nonstop with their song. Just this week their song has begun to fade away, only to be replaced with the constant chirping of crickets.

Anyway, the caterpillar in our backyard was humongous—its girth rivals that of the cicadas. We took a few "scale" pictures for you, but at this point we weren't sure whether it was poisonous or not so we didn't want to actually touch it. Don't laugh—there really are poisonous caterpillars.

This caterpillar looked to be about as long as Benjamin's forearm. 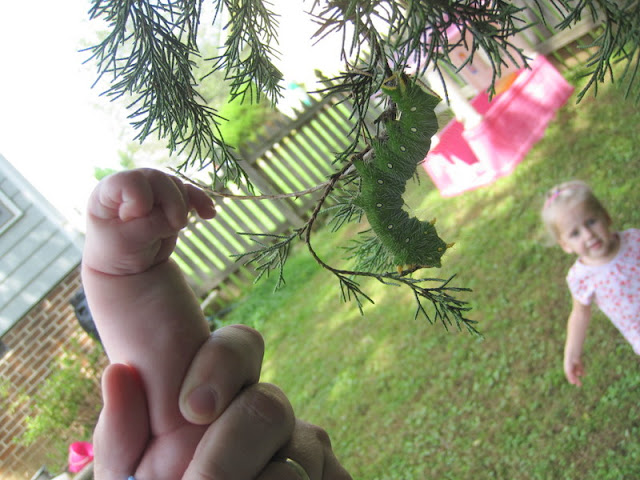 Benjamin's arm has really chunked up since he was born, though. It used to be as skinny as his daddy's finger but you can see it's much chubbier now—and much, much chubbier than that caterpillar. My fingers were a better comparison. 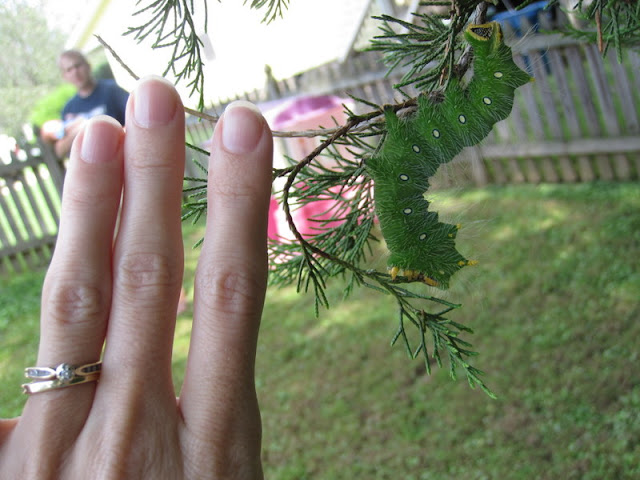 We left it sitting on our tree and went inside to find out what kind of caterpillar it was. It's an imperial moth caterpillar. And although it looks ferocious (and will rear its head at you if you poke it) it's neither dangerous or poisonous. Imperial moths themselves are huge—they're in the Saturniidae family, which is full of giant moths, such as the luna moth—so its obvious why the caterpillars would be huge, too.

We found out that these caterpillars usually only eat from one tree, so we felt honoured that this caterpillar chose our tree, and that after they've eaten their fill they drop to the ground and burrow into a nice comfy spot where they pupate. So although we did take the caterpillar out of the tree in order to let the girls enjoy it for a while in the butterfly keeper, we returned it to its tree before bedtime so that it could do its thing since we're not really equipped to keep it (though adults in the Saturniidae family apparently don't eat...ever...so it wouldn't be difficult to figure out what to feed it if we had been able to successfully hatch it (which we probably wouldn't have been)).

These caterpillars poop. A lot. Our butterfly keeper was covered with frass by the time we let our caterpillar go! It was nasty. I thought, at first, that we should take a picture of the caterpillar crawling on Benjamin—because Benjamin's so little and the caterpillar's so large—but after seeing all the frass I thought better of it. So instead you get a picture of Benjamin in the cute Hungry Caterpillar overalls he wore to church last week. 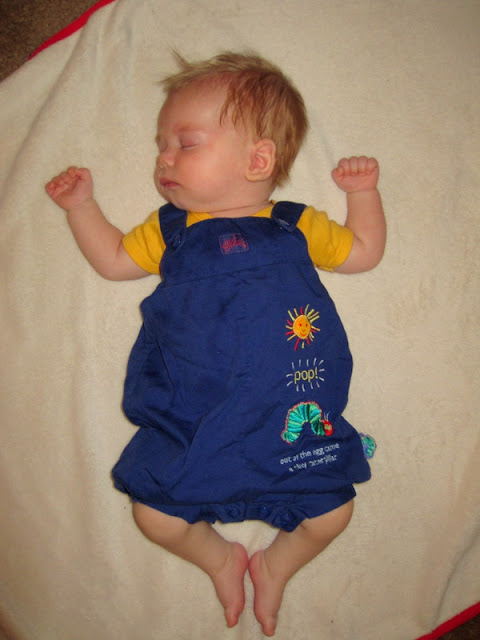 We also used the caterpillar as an icebreaker for meeting the neighbours. They are really the nicest people but I'm shy and they didn't want to intrude and so we never got around to visiting after she dropped that loaf of pumpkin bread off a couple of weeks ago. As time went on it felt more and more awkward to go over there since we'd waited so long. Today, though, we swallowed our fear and our pride and the girls and Benjamin and I marched across the street hand in hand to visit the neighbours. Our back-up story was that we were inviting their girls over to look at the humongous caterpillar in our backyard but it turns out we didn't even need a reason to go over there.

They invited us in right away and broke out their toys. The girls (five of them altogether) played nicely for a couple of hours while the moms sat on the couch with Benjamin and chatted. When it was time to go home our neighbours walked us across the street so that they could take a shufti of our caterpillar before dinner. It was a lovely afternoon.
Posted by Nancy at 9:29 PM