I've got nothing to say but it's OK. Good morning...

On Wednesday Andrew and I stayed up far too late. He was studying. I was writing. We lost track of time. It happens. And when it happens it's usually very difficult to get up in the morning so I was bugging Andrew about setting the alarm.

"And you're sure your volume is turned up?"

It's not like we've ever had issues with alarms failing to go off properly or anything (just kidding; it happens all the time). Somehow I always felt Andrew was responsible for his actions so if he ended up late to something it was his fault but now that Rachel is also in school I feel obligated to wake her up in the morning. It's like she's only a child and I'm supposed to be responsible for her or something.

So I peeked over Andrew's shoulder and looked at his screen: 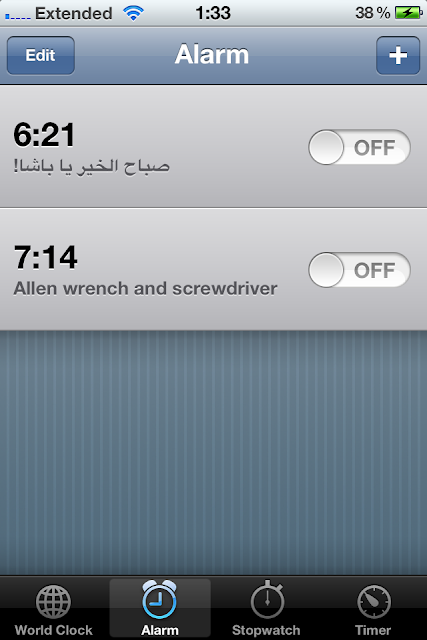 Andrew started laughing, too, because it was late and (like his father) he gets giggly when he's tired.

"No, I just..." he said between fits of laughter. "It's just that my desk at school used to have a keyboard tray and now the tray is gone but the little metal bars are there and I want to take them off so I stop crashing my knees into them."

"We've had three weeks of school," I pointed out. "This alarm is helping you...how?"

"Well, I only set it last night. I wanted it to go off while I was eating breakfast this morning so that it would remind me to grab them when I was already awake and ready to go."

"No, it didn't. I slept through the first alarm and woke up on the second with only fifteen minutes to get ready before I left the house. So it was helpful to set the alarm, see? And for your information my other alarm says 'Good morning, sir!'"

"I'm glad to know that your alarm greets you by title, ya pasha," I smiled.

The 7:15 alarm has since been renamed "Rachel's alarm" since that's about the time we get her up to get ready for school. Andrew has yet to remember the tools. And if you're wondering why his alarms are set for 6:21 and 7:14 it's because he feels sorry for unused numbers (in his opinion 5 and 0 get way too much attention).
Posted by Nancy at 11:14 PM