Weekends have been resurrected! For the past five years my weekdays and weekends have been identical but with Rachel in school now the weekends are different—Rachel's home all day! We celebrated our survival of the first full week of school (minus Monday, which was a holiday for everyone in the entire country but Andrew) by going on a picnic. In the car Rachel said that the only thing that made her sad about going to school was that she has to be away from her family all day long (which is a great compliment to our family, don't you think?) but as Andrew pointed out it means that we get more quality time together this way—time when everyone is making an effort to be kind and have fun rather than screaming, crying, and whining.

We've heard a lot of talk about Eno River State Park so we decided we should check it out. I spent the afternoon making pita bread and hummus so that we could leave as soon as Rachel got home (which means we left 45 minutes after she walked through the door) to have our picnic at the park, which we hoped had ample picnic areas. It did. We were the only ones there (besides a few overly agressive friendly squirrels). 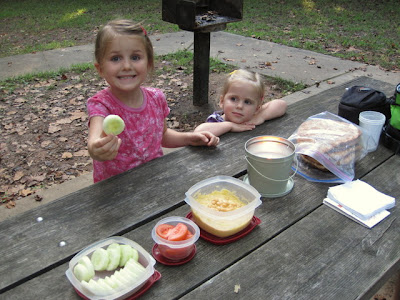 During dinner a something fell on my foot so I kind of freaked out and pushed it off with my other foot. I looked under the picnic table to see what it was and at first it looked like a little cottonwood seed pod and I was relieved until it started creeping, inchworm style. It was a fluffy little caterpillar—and I'd crushed it with my foot! The poor thing eventually collapsed, dead as a fluffy little doornail.

I'm pretty sure killing wildlife is against the park rules. But it was an accident, I swear! If, on the other hand, it had been a spider (and we saw some wicked-looking spiders on the trail) then it would have been more of a crime of passion than an accident.

Alright, so we ate dinner—being visited by squirrels and murdering innocent caterpillars—and then went to explore some trails. And by 'some trails' I mean 'a trail.' And by 'a trail' I mean we took the trailhead that was right by our picnic table. It was a good trail, though, leading to the footbridge that we'd heard about and had wanted to find. 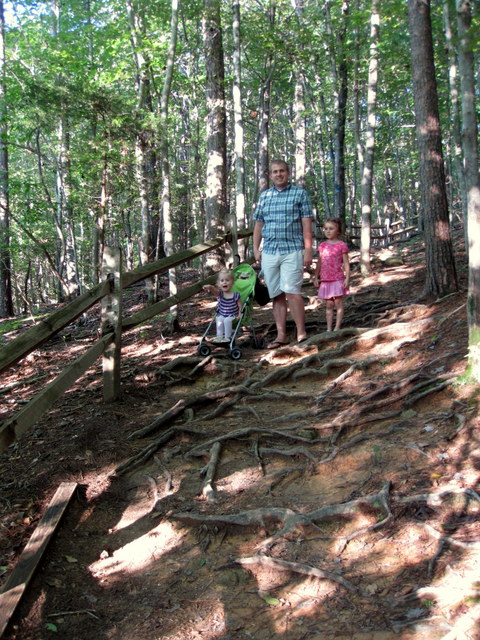 It is so beautiful here but we learned that a) the umbrella stroller was a bad idea and b) everyone should have worn shoes. There were tree roots all over the trail, which made for a bumpy ride for Miriam when a ride was possible at all—it often wasn't. We also warned the girls to keep an eye out for snakes, specifically copperheads since those were mentioned in the park map and because a friend of ours said he was jogging one of the trails and almost stepped on "the biggest copperhead [he'd] ever seen—it was lying right across the trail like a root!" Rachel thought every root was a copperhead snake and spent the vast majority of the hike screaming for no reason. It's good to always be on the lookout though.

Another little safety lesson we had on the trail was to never (ever, ever, ever) pick mushrooms or berries because we don't know if they're safe to eat or not. Fortunately there was a big sign in the picnic area about the bats in the park, which are dying off mysteriously...though researchers hypothesize it's because they're eating bad mushrooms. I'm kind of partial to the red-capped ones which, let's face it, though they may be beautiful, are probably killers (though apparently "a fatal dose has been calculated at an amount of 15 caps" and while I'm not a picky eater I don't usually just sit around popping mushrooms in my mouth, so...) so we told the girls that they are to never (ever, ever, ever) pick mushrooms. Or anything, really. Unless we're specifically out picking things...that we know are edible...like the figs from our backyard.
I still remember when my mom caught Patrick chowing down on some mushrooms growing in our yard in PoCo. That merited a trip to the ER. Fortunately, they were not poisonous mushrooms and he's okay. We think. I mean, he's 23 now and he was 2 at the time so we're pretty sure he's okay though the experience may have contributed to his picky eating. 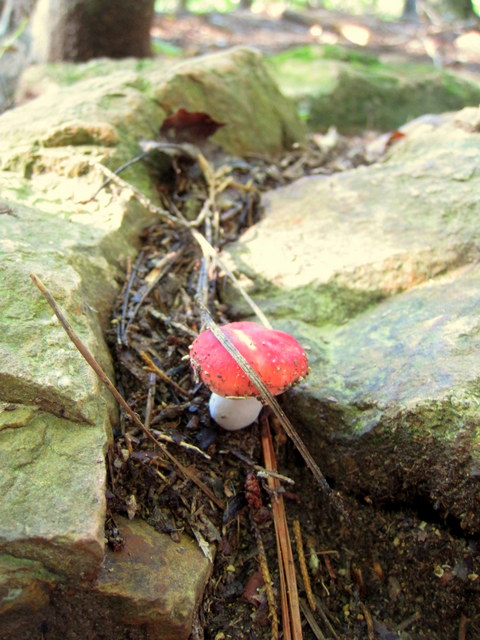 Our third safety lesson was about water. 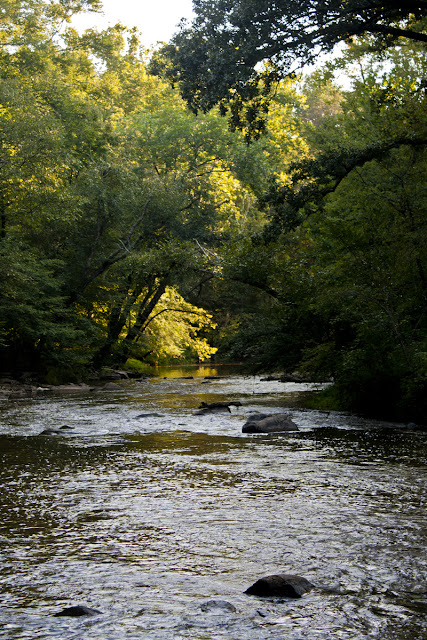 We never (ever, ever, ever) go to play in or around water unless we ask permission—and that permission is one use only (so if Mom says you can go touch the water at a specific part of the river while we're hiking one day it doesn't mean that you can run off to touch the water at that same spot another day without asking because your permission has expired). 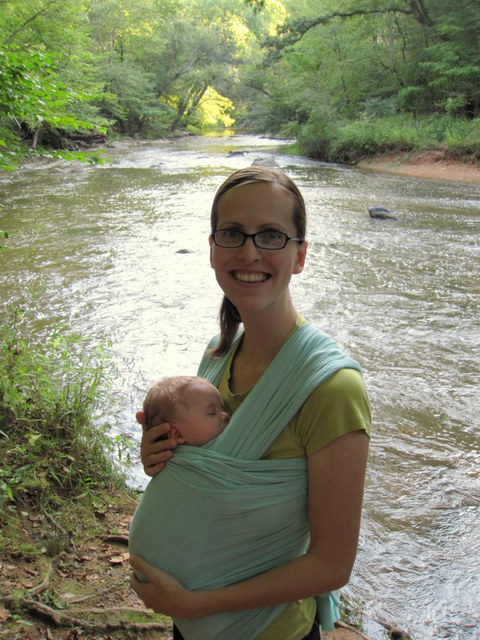 Not that I'm panicky or anything (but I'm kind of freakishly paranoid around water). 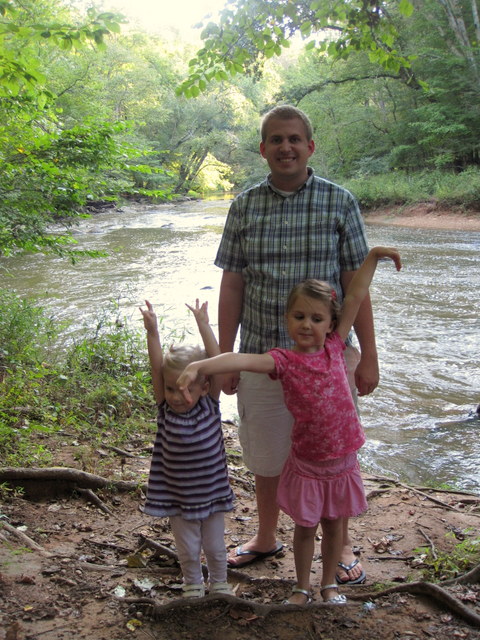 I stopped the girls so many times on the trail to have these "nature safety lessons" that Rachel eventually moaned, "Mom, is there anything else we need to look out for and can you just tell us now?"

"Well, ticks and chiggers (whatever those are)," I answered.

"What are chiggers?" Rachel asked.

Luckily, even though we were in the middle of a (rather large) state park we were basically also in the middle of the city so Andrew was able to look up what chiggers are. They're nasty little mites. 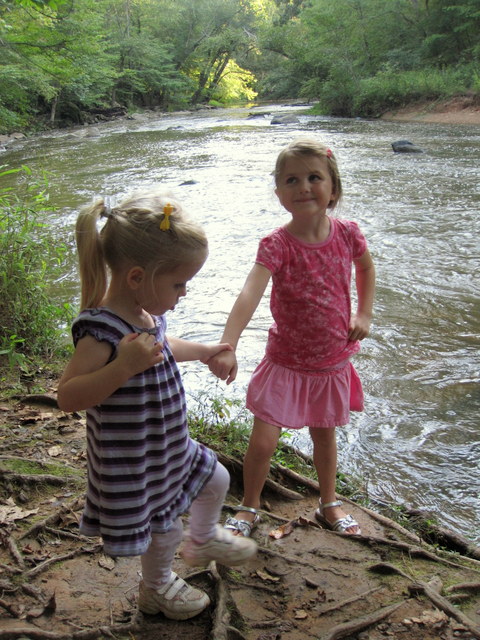 This was our first little peek at the river. It's gorgeous. We spent quite a bit of time here enjoying the view and touching the water (touching the water was very exciting so some of us had to take more than one turn). 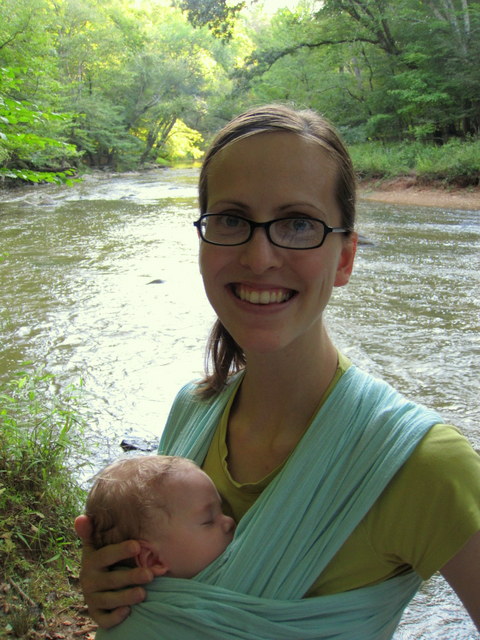 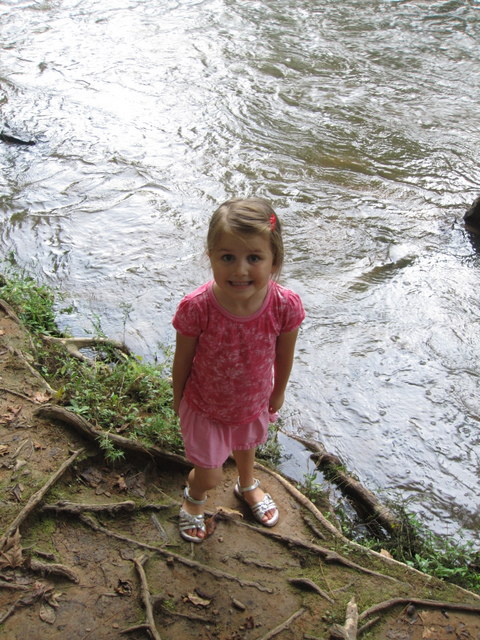 At the end of our hike was the Fews Ford footbridge—it's a little suspension bridge that is just swingy enough to make my young-mother heart stop (but it's small potatoes compared to the Capilano Bridge in Vancouver—I don't know how my mom ever let us go on that)! Of course, the trail continued after the footbridge; we, however, did not. 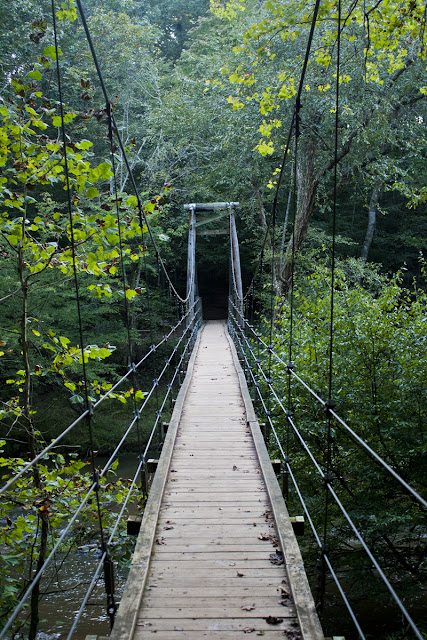 Rachel opted to hold Andrew's hand instead of mine because he's apparently a little better at grabbing on tight than I am (or so we were told). 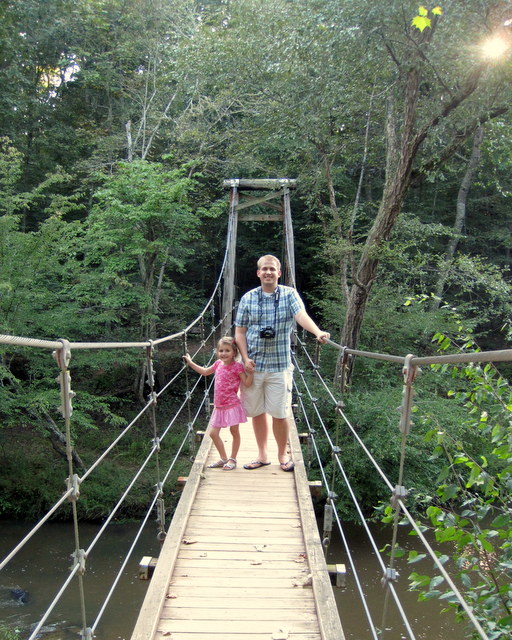 Miriam was at first excited to be my bridge-crossing partner but when Rachel said that Daddy was better at holding tight she looked at me reluctantly. If you'd ever taken Miriam to the playground you would know that bridges freak her out, especially the bouncy ones. To say she was terrified to cross this bridge would be an understatement, but she warmed up to it. 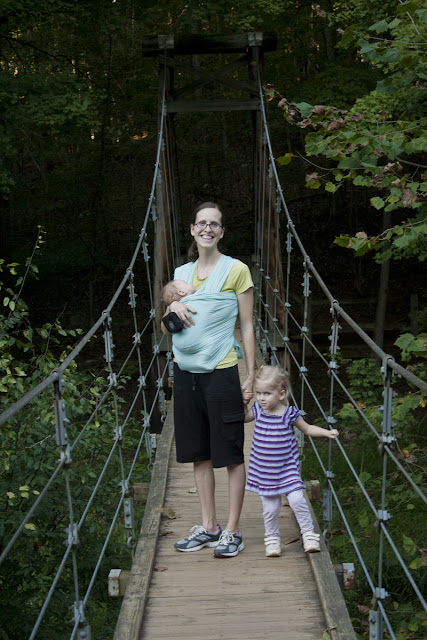 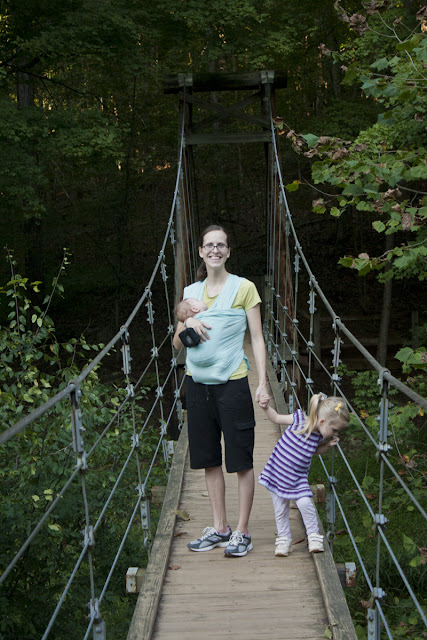 I was fine with the bridge until all the spiders that had been hiding out during the day realized it was getting to be sunset and began dropping out of the trees to begin weaving their crepuscular webs.

Do you see that bolt? I would've put my finger next to it to demonstrate it's mammoth-like size except...do you see that hideous, hairy thing sitting on it? That's a spider. 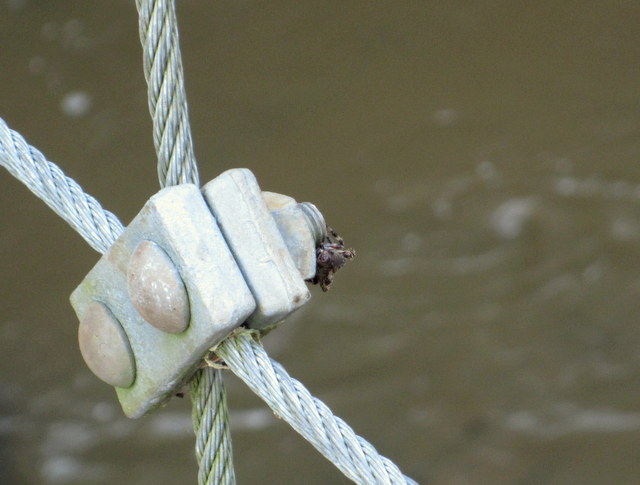 But the girls had fun! (The pictures may be a little blurry because I was standing on a suspension bridge with a baby strapped to my front while juggling two cameras and trying not to be landed on by incoming arachnids). 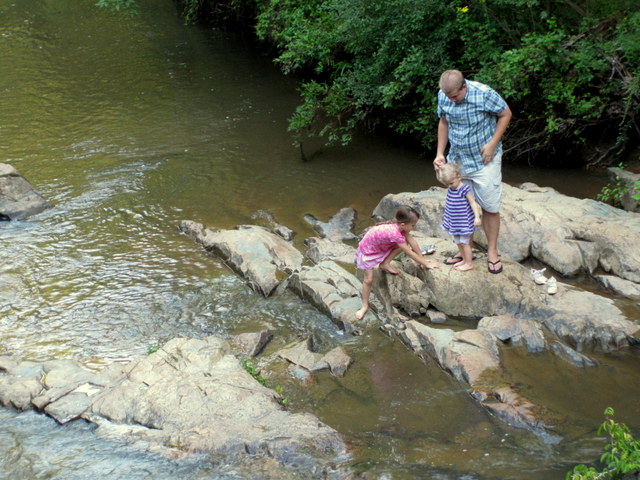 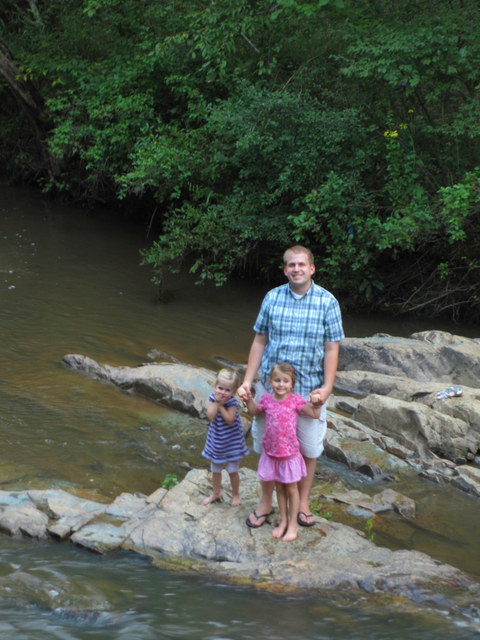 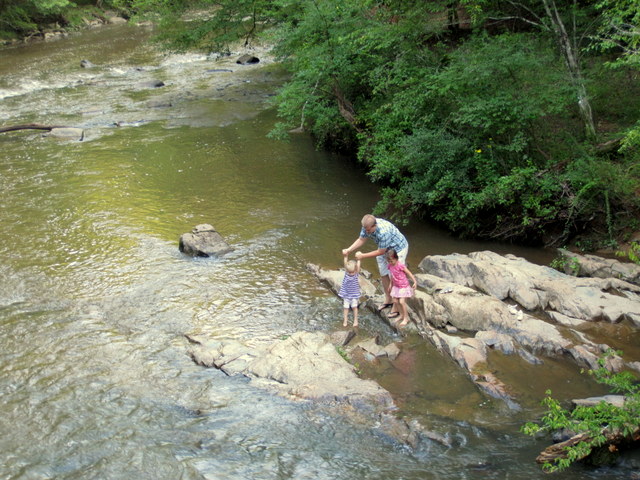 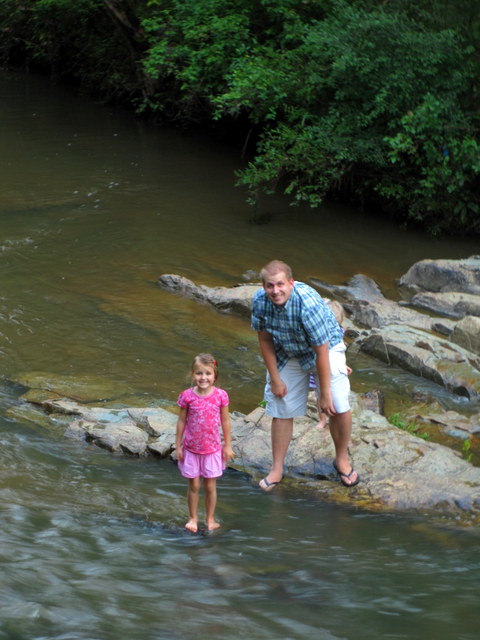 Eventually I asked if they were going to be down there long, and if so, could I join them? I had been under the impression that they'd all be joining me in crossing the bridge so that we could go home but apparently the water was so alluring that they forgot about that plan and instead got really, really wet.

So I joined them. 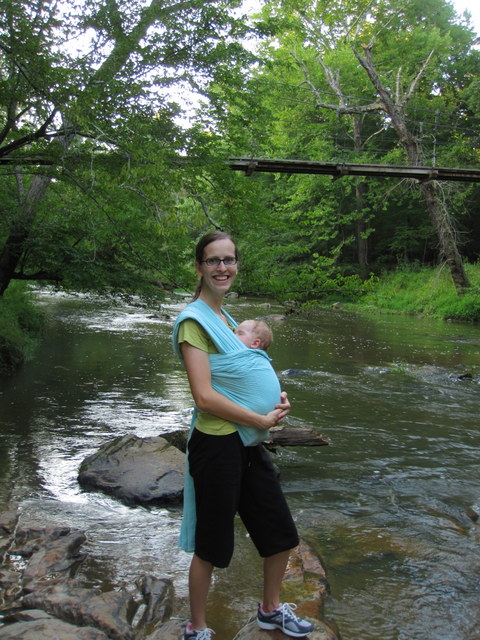 And we stayed and played in the water for a while longer. 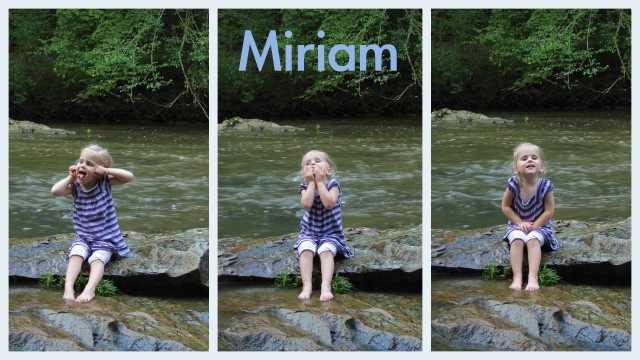 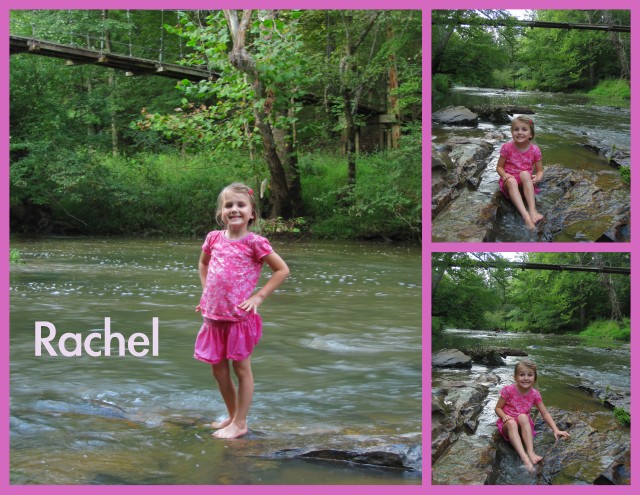 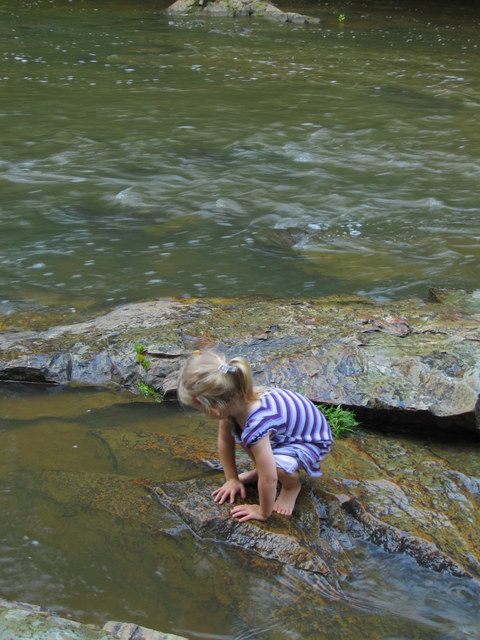 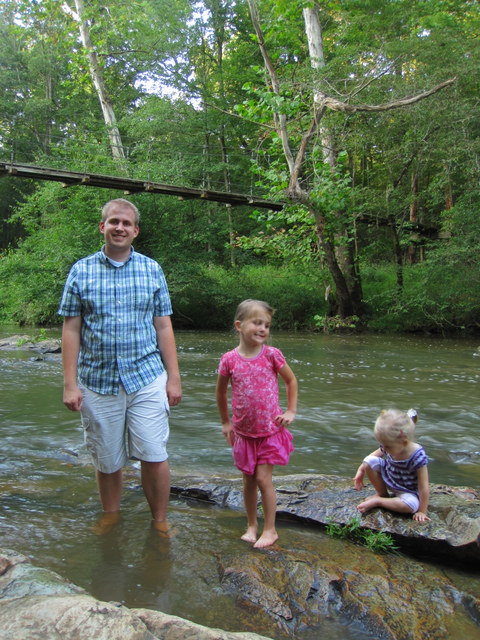 We almost had to bribe Rachel in order to leave the river, though she reluctantly tagged along with everybody else. 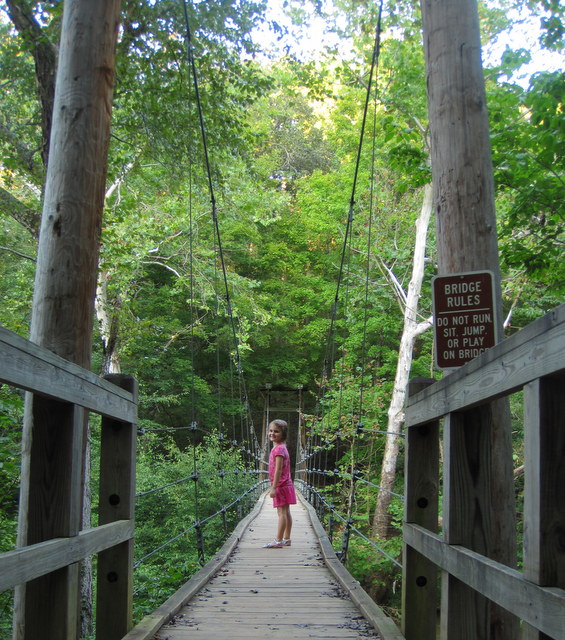 And then we almost had to bribe Miriam to get on the bridge again, though she reluctantly tagged along with everybody else. She even let us take her picture on the bridge, though you should note that she's standing on the firm platform (not the suspended part) and she's clearly found her happy place (thumb in mouth, hand on ear). We thought it was interesting that we visited the park just a day after the 16th anniversary of Hurricane Fran—when I was standing on the platform, the bottom of this sign was about eye-level for me: 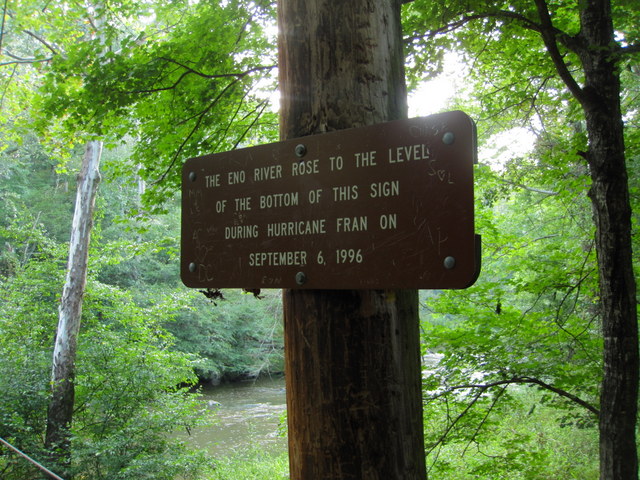 We left the park resolved to become frequent visitors. 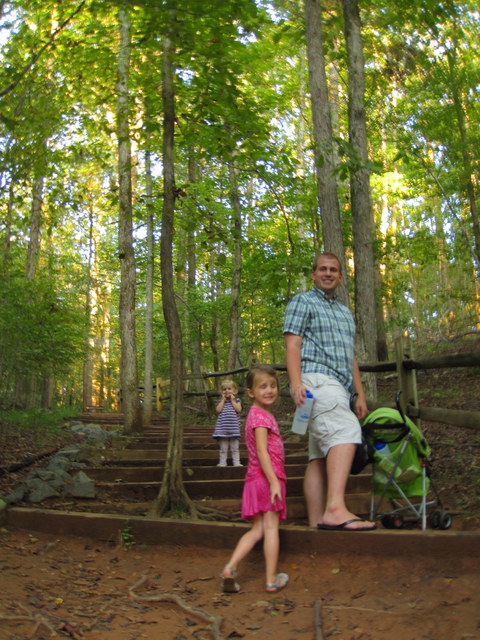 (Even after we came across this many-legged thing:) 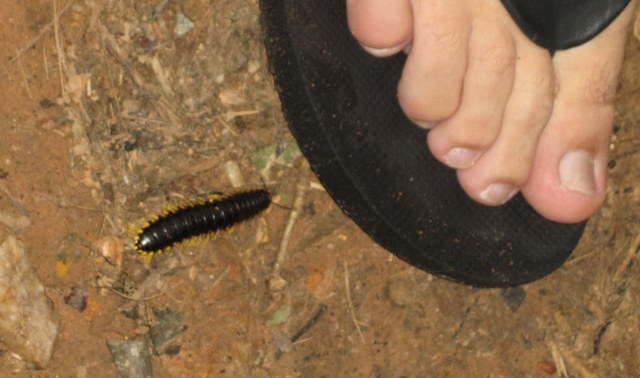 I think it's pretty safe to say that our entire family is impressed and enamored with our verdant surroundings and we're certainly looking forward to exploring it some more! 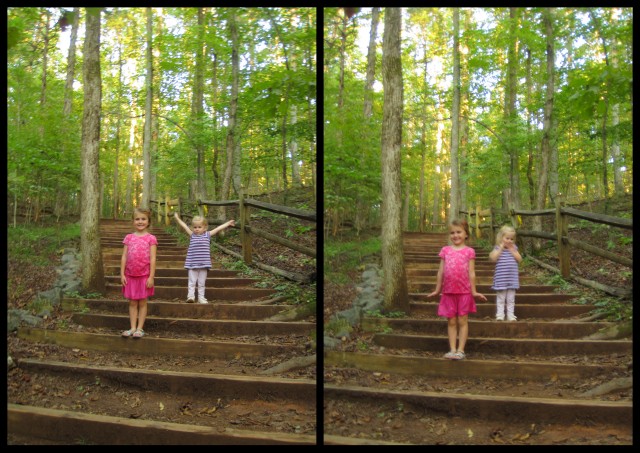