Getting ready for church

This Sunday we weren't nearly as popular on Skype as last Sunday so I thought I'd try something new with my "spare" time and actually do my hair before going to church. A novel idea, I know.

I broke out the curling iron Andrew gave me for my birthday over a year ago (and that I've used on my own hair only once or twice before) and got three curls in before Miriam entered the bathroom.

"Mom! You're curling your hair! Will you curl my hair, too?" she exclaimed, plopping herself in front of me expectantly.

So I began curling her hair, leaving my three curls dangling limp and lonely on one side of my head.

No sooner had I put three or four curls in her hair when Rachel wandered into the bathroom. "Oh, wow! Miriam—you look beautiful! And, Mom, one side of your head looks nice, but the other side...well, I'm sorry to say this but you forgot to curl it."

So I finished curling Miriam's hair and then started on Rachel's. Both of these girls have rather long hair. Miriam's is relatively easy to curl because its still baby fine. Rachel's on the other hand took quite a bit of work and then the curls started falling out right away because I didn't have any product on hand to spray them stiff—so we threw her hair in a ponytail and let the curls play with the tips of her hair. She was pleased with the look (even if you can't see her curls in the picture). 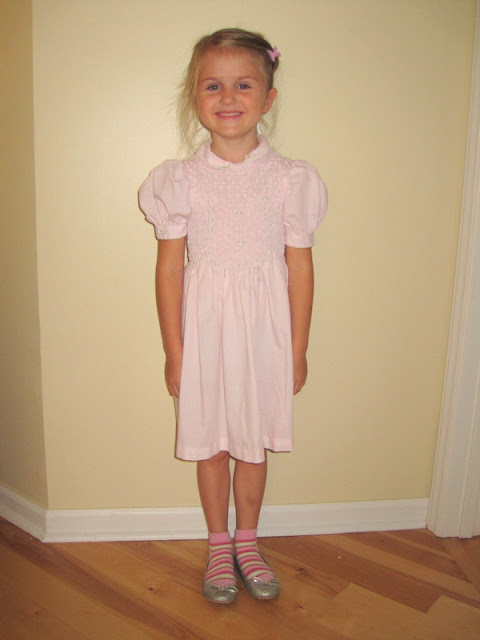 Miriam was happy with her curls as well and announced that she couldn't take a nap before church or else her curls would go straight and then she'd be so sad. I gave her permission to skip her nap.

I shouldn't have done that because it turns out that she can be sad with or without straight hair.

In fact, I'd say that the amount of sleep she gets has a greater effect on her mood than does the style of her hair (though if her hair style does affect her mood it has less of an effect than her sleep). She was quite a grumpy child today and really could have done with a quick nap but it's too late for that. You can see from the next set of pictures, though, how grumpy she can be (which isn't actually all that grumpy).

She wanted me to take her picture but her sleeves were all bunched up. I asked her if we could unroll them, just for the picture, and then she could roll them back up again. She said no. I said, "Sure. We'll just leave them unrolled for ten seconds—they're so pretty unrolled!" So I unrolled them and tried to convince her to be happy and count to ten with me. She was not going to do it.

These three pictures were taken within a 30 second window: 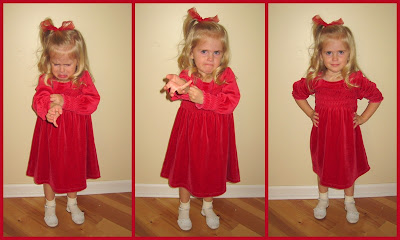 I'm not sure why I insisted on having her unroll her sleeves in the first place. I realize it's no big deal whether her sleeves are up or down (she's cute either way) but for some reason I just wanted the sleeves down and she wanted them up. It didn't turn into a huge thing but she definitely showed off some of her attitude!

She didn't even end up wearing that dress to church—she went missing just as we were going out to the car and Andrew found her on her bed, sobbing, wearing nothing but underwear because her dress was "all wrong!" She wore a pink dress instead. I left the red ribbon in her hair. Whatevs.

I did get around to curling the rest of my hair, in case you were wondering. It never ends up the way I imagine it will in my head. It's almost like I need more practice than three times a year or something. 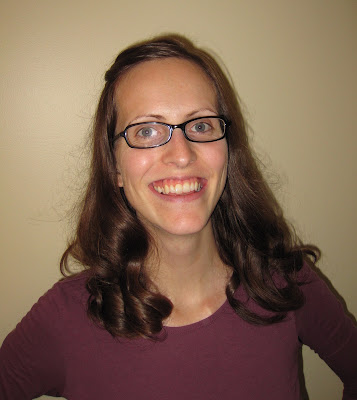 Naw! I think I can safely stow my curling iron away for the next four months.

P.S. I gained new appreciation for my mother-in-law who lovingly curled my girls' hair whenever they happened to catch her with a curling iron in her hand (which was far more often than they ever caught me with a curling iron in my hand (ie. basically never)). She easily devoted hours to curling their hair in the course of the two years we lived in her home! They loved it every single time, just as they loved me curling their hair this morning. The odds, however, of me curling my hair tomorrow are null. Grandma curls her hair every day. It's possible that she'll be the next person they see curling their hair...
Posted by Nancy at 10:05 PM