Last night around 1 o'clock, Andrew sneaked outside and sprayed the living daylights out of our garbage can. An unfortunate band of angry wasps had built their nest in a little crevice of our can and it made taking the garbage out quite tricky. 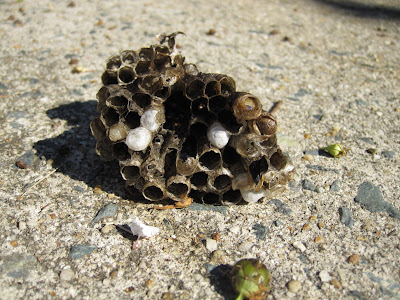 Andrew checked on it when we got up this morning and found about a dozen dead wasps lying on the ground in front of our can. He poked the nest out so we could look at it. Rachel's first question was, "Why do wasps build nests if they're not birds?"

I couldn't come up with an answer to satisfy her; no matter what I said she would retort, "But they're not birds!" And so, because we were in the van on our way to a pig pickin', we just turned the air in the van on full blast so that we couldn't hear her talking anymore.

We had a fun time at the pig pickin' (but that deserves a post of its own because it's something that I'd never exactly heard of before moving here) and when we came home we primed the shed. That was a lot more involved than we figured it would be. It took all afternoon! 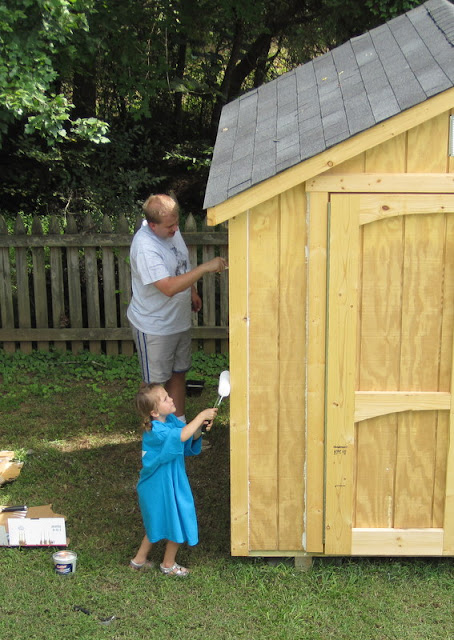 We dressed the girls (including me) in some old t-shirts of Daddy's and everybody got to work. Before I even set foot outside I sat down to nurse Benjamin, who for the first time in his life did not fall asleep while nursing (okay, it might be the second or third time—still an unusual occurrence) and spent the next hour or so bouncing him on my hip. Miriam lasted all of two minutes before she quit (and I think she's actually wearing one of my old t-shirts, not Andrew's). She settled down to play at the sand box—it's a planter buried in the garden, filled with sand...so sandbox, I guess. We can't think of anything else it could have been used for. 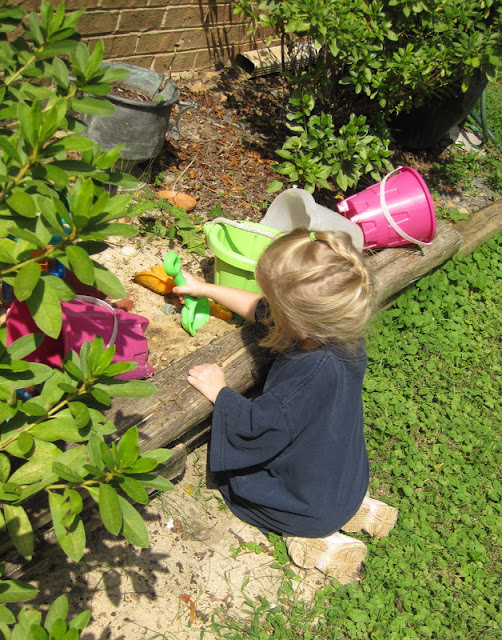 Rachel stuck it out with Daddy for the full four hours it took to get that shed primed. It's nice to have a child who is finally somewhat useful. She painted everything up to about four feet. 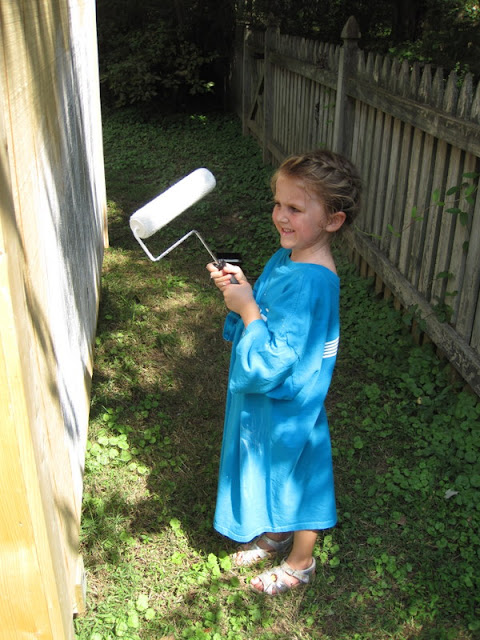 I was eventually successful in calming Benjamin down enough to put him in his bouncy chair. I put him in the shade of the fig tree and got to work.

Somehow we badly miscalculated how much primer we needed, even with the help of the guy at Lowe's, so we searched through the cans of paint left by the previous occupants of the house and found a couple more cans of primer. I was busy prying one open with a screwdriver while Andrew and Rachel waited around, Andrew with a soggy roller in his hand, Rachel with a well-used paint brush.

Suddenly—from out of nowhere—this huge flying insect started dive-bombing Andrew. He screamed and ran away, waving his arms (and the soggy paint roller) in the air. The bug darted at Rachel, who started following Andrew around the yard, also screaming and waving her paint brush. It then started flying in my direction so I abandoned the half-open can of paint and threw myself into the fray.

I'm sure it was quite the sight for the neighbours—the wife chasing the child with a screwdriver, the child chasing the father with a paintbrush, the man running frantically in circles, swinging a paint roller over his head like a pair of nunchucks, all three screaming maniacally while the toddler stands cooly on the deck sucking her thumb and the infant rests peacefully under the fig tree.

In our defense it was huge. And I think it was a bee. A flesh-eating bee. A radio-active, flesh-eating bee...that had cross-bred with a shark. Or a bear. (I'm not sure which; it was hard to tell.)

Whatever it was, it eventually decided that we were too difficult of moving targets and left us to finish our work. 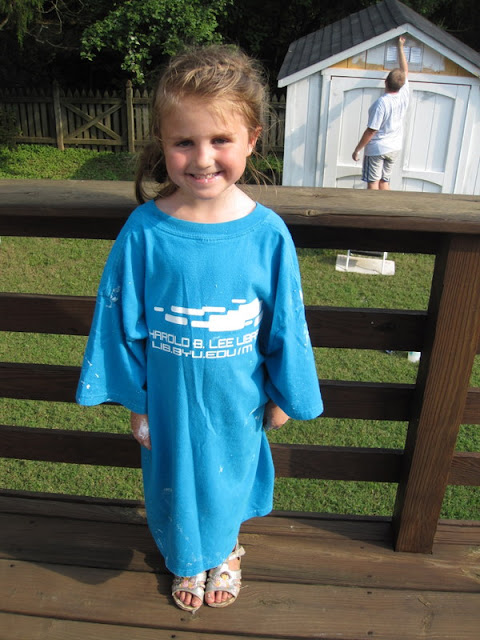 Soon, though, Rachel and I got tired of working so we picked some figs, found what I think is poison ivy growing on the other side of our fence (please no), and went inside to wash up and make dinner. The shed's all primed up and ready to go now! Rachel was an excellent helper but I'm almost thinking we should some more capable hands (eg. bigger, stronger, taller people) over to help when we paint it grey...
Posted by Nancy at 1:27 AM