Rachel had an "early release day" today, which means she got let out of school two hours early. She has several early release days scattered throughout the school year and they're always on Wednesdays which is awesome because that's the day when admission is free for Durham residents at the Museum of Life and Science.

Today we wanted to see everything the museum had to offer so we breezed through the whole thing in two hours. We missed a ton but we saw a lot. We'll definitely be going back (but probably not until the next time Rachel has an early release Wednesday).

I had to tear Andrew away from the weather exhibit. I won't tell you how many different weather apps he has on his phone because I think it's generally understood that he's a little bit of a nerd. He kept calling the girls over to each station while I was standing there with the baby going, "Two hours. Whole museum. Get moving."

We finally left the weather exhibit only to stumble into the aerospace exhibit where Daddy stopped to lollygag at every little piece of metal.

I sound like a killjoy, but I promise I wasn't being a killjoy. We were just on a mission to see the entire museum—we'd promised Miriam butterflies and caterpillars—and though I think climbing in little space ships and looking at models of the Lunar Lander is interesting to do, it isn't all that interesting to write about. But maybe I'm just jealous because Andrew was the one climbing into spaceships while I stood outside and waited with an infant strapped to my front and a toddler clinging to my leg.

But, hey, Rachel and Andrew had a great time at the space exhibit.

"We really need to get a move on," I told him when we finally started moving again.

But then they saw this little "play to learn" place and the girls and Andrew ran in to explore. No sooner had they run in than Andrew was calling the girls back.

"You could've let them play for a while," I said.

"Too slow, too fast. You're kind of hard to please," he said.

Eventually, though, I had to give up keeping a decent pace because the spirit of the museum kindled something deep within Andrew and he started dragging the rest of us around the place. It was like chasing a child with ADD (Hi, Jacob). By the time we left, Andrew was burning with the passionate flames of science. And life. To say it awakened his inner child would be a huge under-exaggeration.

I think my absolute favourite part of the day was when he was almost jogging down the sidewalk (stop, drop, and roll, buddy—I'm strapped to a baby and can't move that fast!) on his way to "Explore the Wild" when he froze in both his tracks and his speech.

"Let's go to Explore the Wi...whoa!" he yelped, "Super cool dinosaur, right there!"

And then he took off in the opposite direction of where we had been headed. 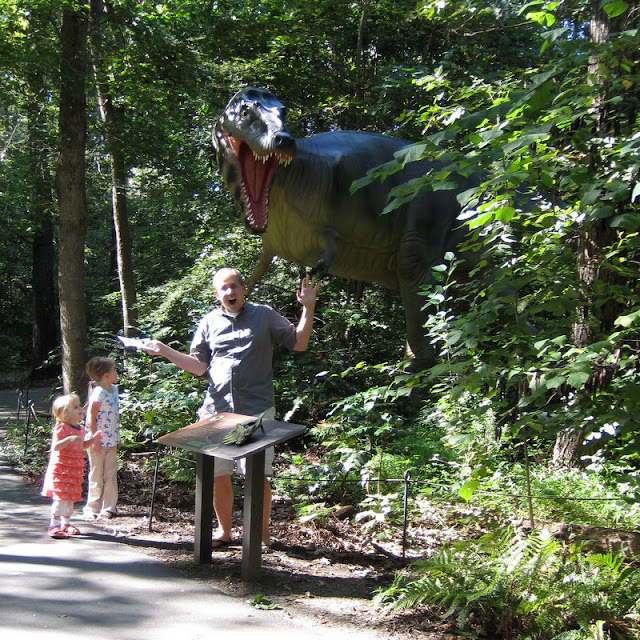 I proudly told the girls that this killer was an Albertasaurus and that the dinosaur across from it was an Edmontonia, both hailing from Alberta, which is in Canada, and...

"I know, I know. Alberta's a great place to find dinosaur bones," I said with mock modestly. 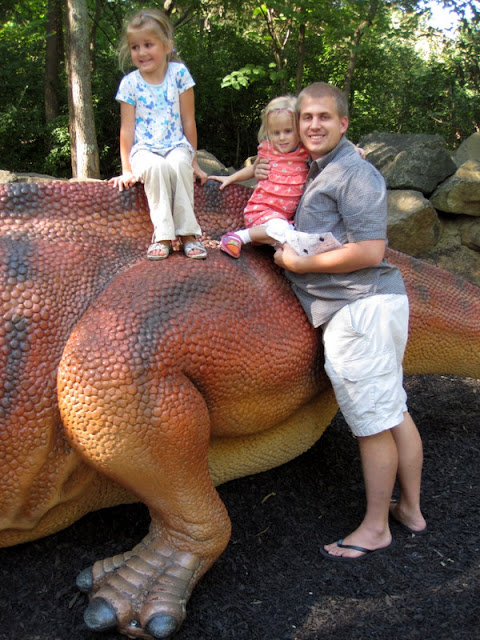 Rachel crooned over the maiasaura, the first motherly dinosaur (and also—did you know?—was the first dinosaur to be sent to space. You should have seen Andrew swoon when I pulled that little fact out of thin air (meaning my head (without any help from the internet (except the research Rachel and I did online a couple of months ago when she was really into miasaura)))).

When we got to the Apatosaurus, Miriam started imitating Littlefoot. I wasn't really sure what she was doing and had to ask for clarification. She was waddling around kind of like this: 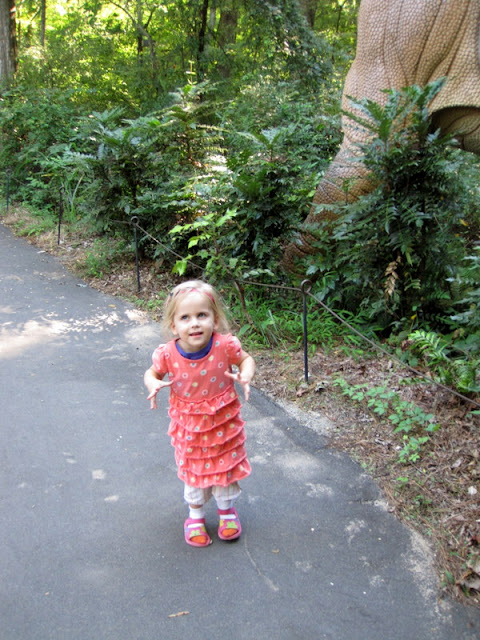 For a long time: 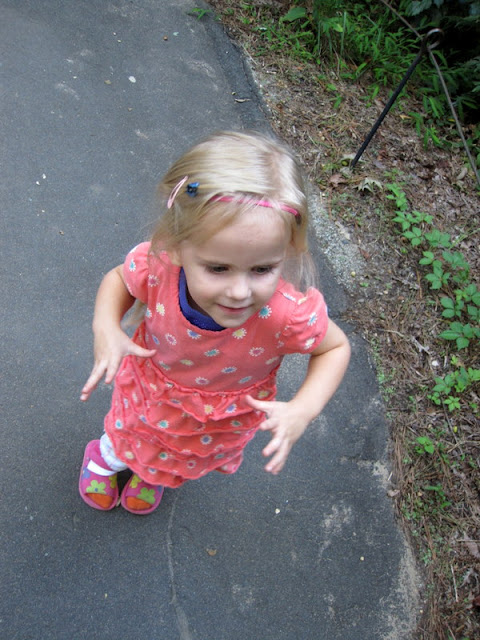 After the dinosaurs we went to Explore the Wild, which was awesome. Andrew was holding the map and he said there would be bears and wolves and monkeys (but he meant lemurs (which though primates with tales are not monkeys)). The girls were worried about this and asked if the bears would be in cages.

"Sure," I assured them confidently. But then we started walking into the woods and I realized and announced, "Oh, the bears aren't in a cage. We are."

Miriam got nervous again and felt it pertinent to say, "Uh, I don't like bears. I like bunnies."

Though it is true that the human visitors to the park were fenced in, the bears were also fenced in—there was double fencing and everyone was safe. The bear(s?) that we saw was(/were) way off in the distance so it was rather uninteresting for Miriam (who never spotted it(/them)) and for Rachel (until she spotted it(/them)). Andrew saw a poster about biologist who study black bears and thought there was a picture of a person picking berries but really it was a picture of a person studying bear scat—a scatologist, if you will (not to be confused with an eschatologist).

He laughed about that and then started walking away but then I saw this little exhibit and called him back: 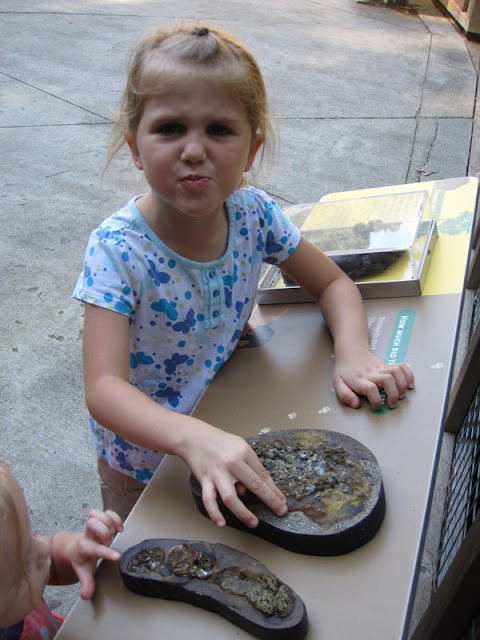 "Look at this!" I said. "Not only can you look at a picture of a person looking at bear scat you can look at bear scat in person!"

He ran back, very excited, and because he was so excited, the girls got excited about it, too. (Don't worry; the scat is coated with resin.) 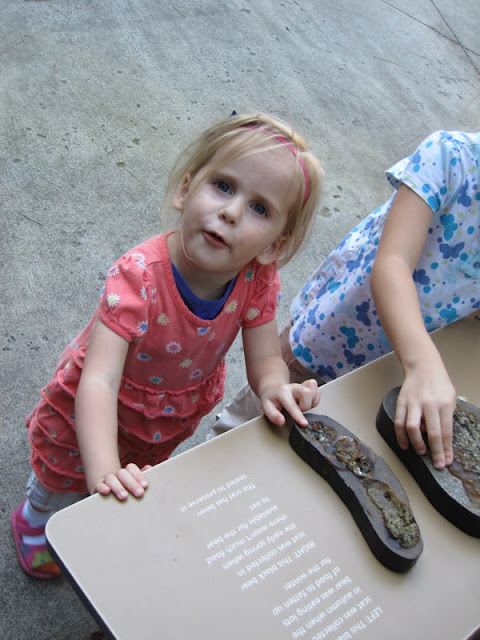 When we really did walk away from the exhibit Rachel asked, "What's scat?"

So we told them.

You should have seen their faces when they realized what they had been touching. It was priceless.

The wolf we saw was the critically endangered red wolf. It used to have a fairly large habitat but now can only be found in small areas of Florida and North Carolina. It was apparently extinct in the wild by 1980 but was reintroduced in good ol' North Carolina by 1987, though their population is still far from thriving.

Rachel couldn't see it, which was frustrating for her, so in a stroke of genius I snapped a picture of the wolf, held the camera up in front of her face, pointed to the wolf and then moved the camera away. "Oh, there it is!" 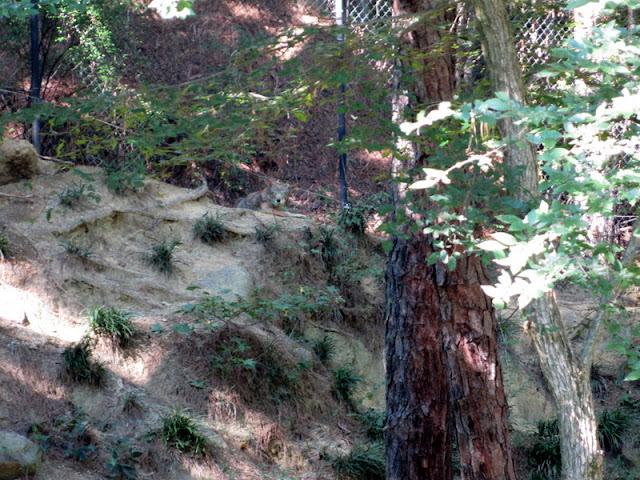 The lemurs were also a big hit, though the girls couldn't decide if they were racoons or monkeys. Poor, misunderstood lemurs. I tried to use Zoboomafoo as a reference but apparently the Kratts brothers have a new show called WildKratts instead of Zoboomafoo so while my girls love watching WildKratts they have no idea who or what Zoboomafoo is (he's a lemur—leap, leap). 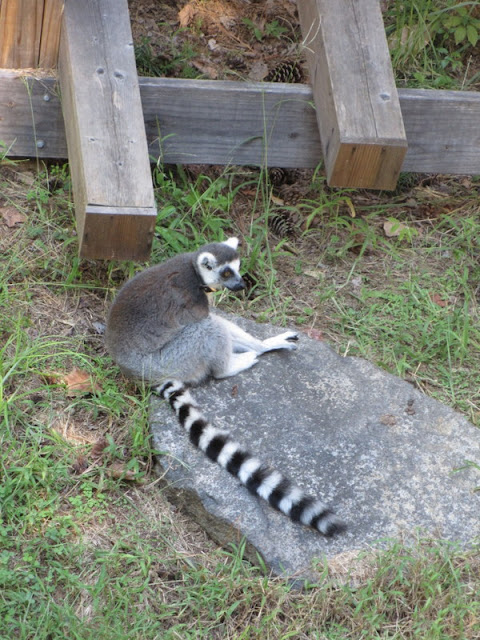 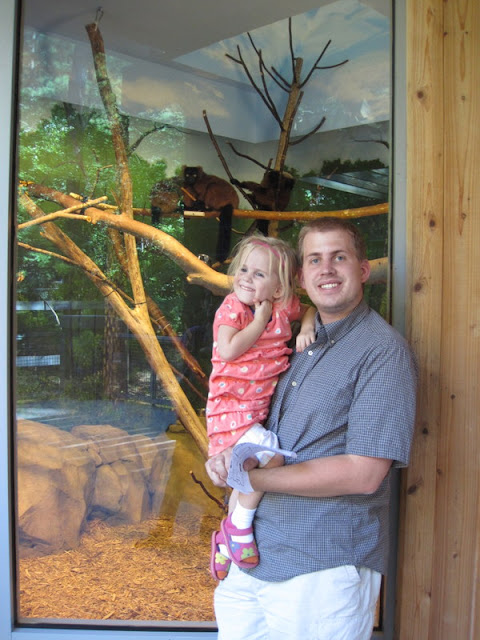 Oh, well. The show stopped airing eleven years ago. To my children that makes it a relic.

One of our favourite exhibits of the day was likely the Magic Wings Butterfly House even though we didn't get there in time for the butterfly release (so it was about as exciting as being in the backyard (which is rather exciting—there are a ton more butterflies fluttering by here than there were in Utah)). 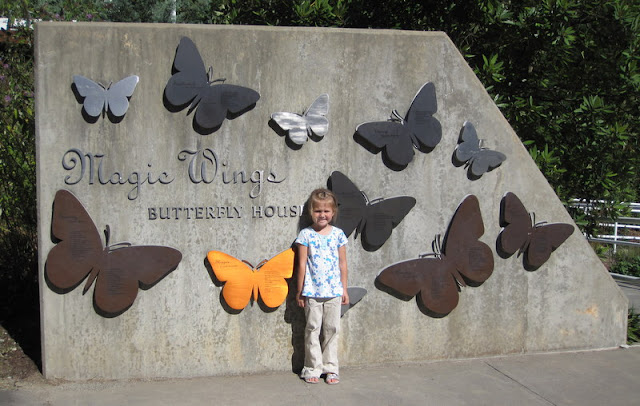 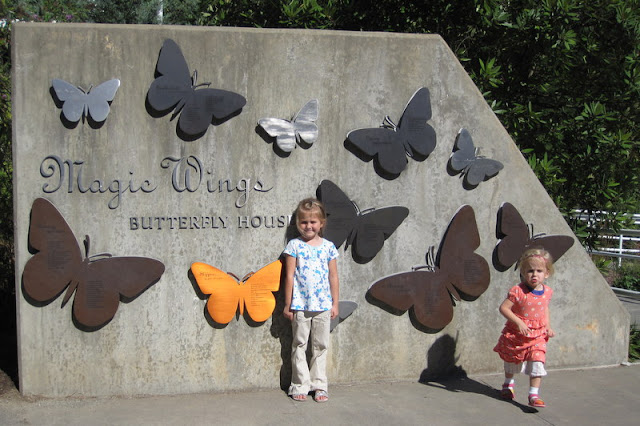 Here's Rachel inside the butterfly house: 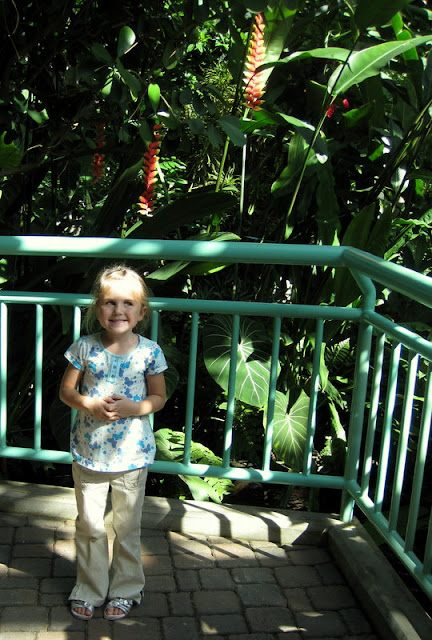 Even more exciting than the butterflies, though, were the insects in the insectarium (which is in the butterfly house building). Talk about giving me the willies! They had a terrarium of black widows, one of African millipedes, another chock full of Brazilian hissing cockroaches. They had case of poison dart  frogs—green and blue and yellow and orange. And the crème de la crème was a huge openair orb spider, just dangling on a branch in the corner.

Now, that wasn't too scary to have hanging around because we have a pet orb spider. Remember? But I was feeling a little sorry for the poor soul whose job it was to feed the black widows and poison dart frogs. I just read on Wikipedia (so it must be true) that "captive-bred animals [poison dart frogs] do not possess significant levels of toxins as they are reared on diets that do not contain the alkaloids sequestered by wild populations." The same thing cannot be said about black widows because they aren't poisonous by virtue of their diet...but I'm sure they found someone who is happy to feed them.

All those creatures were fascinating but we had (blindly) promised Miriam caterpillars. 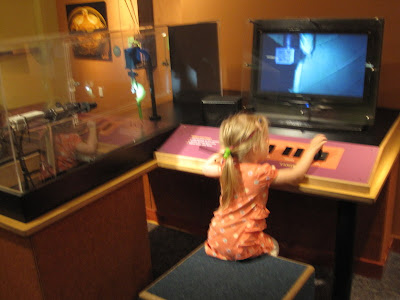 As we were leaving that exhibit she hugged me and exclaimed, "Thanks for the killerpatter!" with as much graciousness as if I were solely responsible for having delivered that experience to her (and no one else like a museum, scientist, mother butterfly, or God had helped along the way).

So I said, "You're most welcome, sweetie."

Our last exhibit of the day (and also one of our favourites) was "Catch the Wind." Before we got there I couldn't imagine how it would be remotely entertaining but, believe me, it was!

We beat our wings: 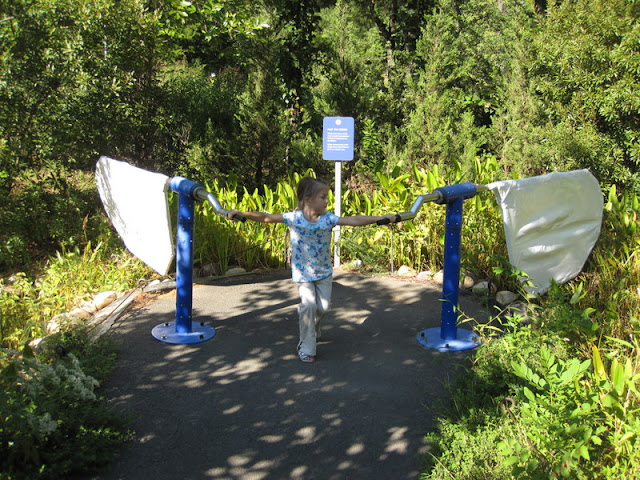 We played with sailboats: 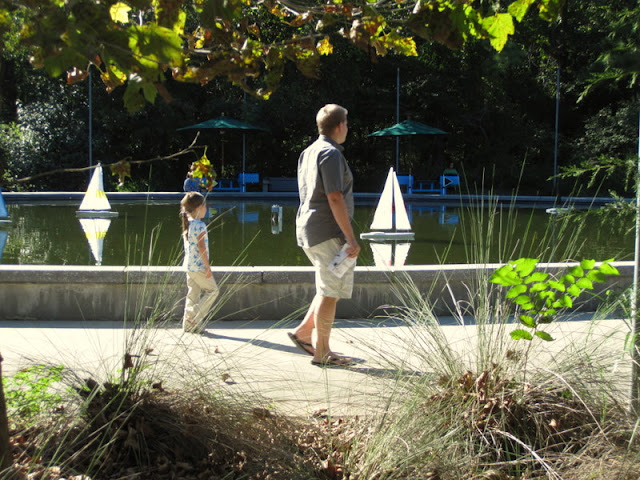 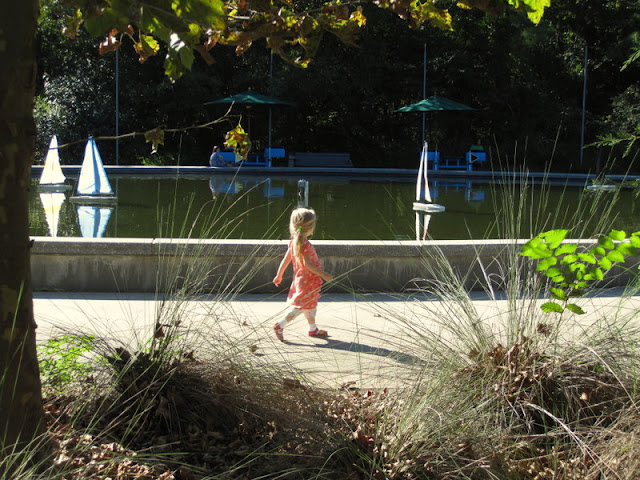 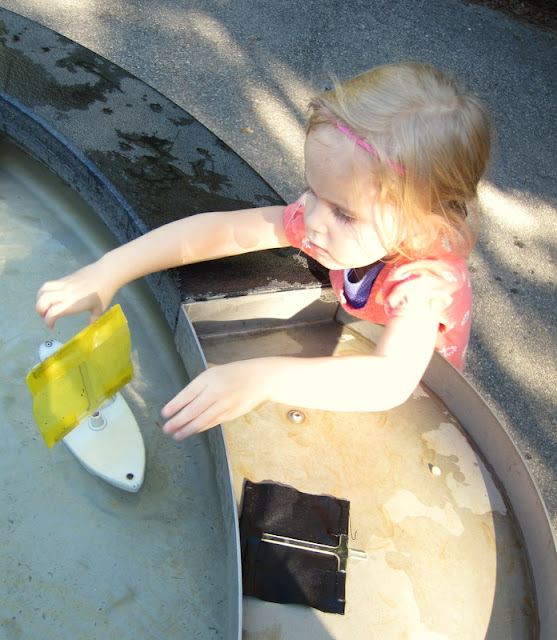 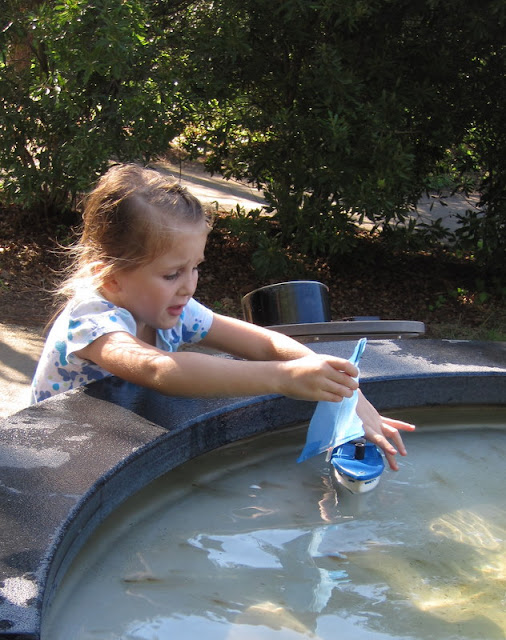 We shot air cannons at each other (and the wall of sequins...but mostly each other): 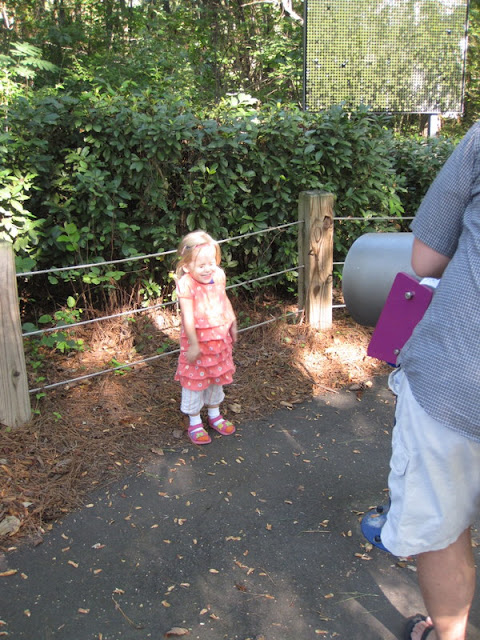 And when we were all done with that we spent some time cooling off in the mists—that's me and Benjamin (nursing) and Rachel in the mist below: 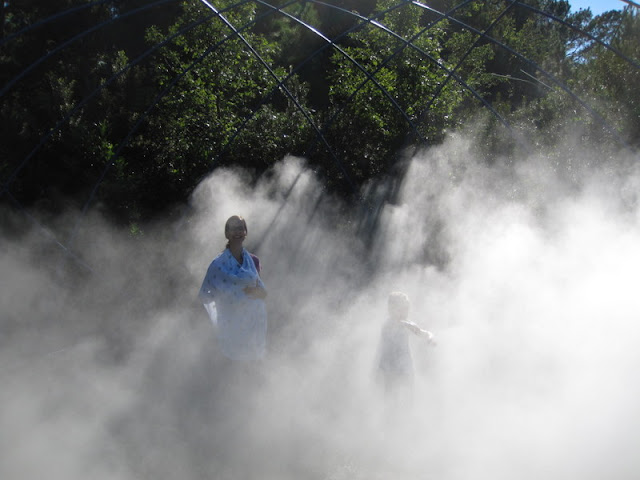 The only bad part about the Life and Science Museum is that it closes at 5:00! That seems so disappointingly early because there's no way to squeeze visits in after school. But at least we were home in plenty of time for dinner, right?
Posted by Nancy at 1:14 AM