Rachel was gorgeous this morning—as in, stunningly beautiful. Unfortunately she banged her knee into the bench on her way to stand by the wall for a picture so instead of a smile she gave me a grimace. Imagine the smile; she's got a beautiful smile. Somehow we've broken into the world of regular pants—this particular pair are cords—and it makes her seem a whole lot more grown up.

After dropping Rachel off at the bus stop (technically we also for her bus to come since we're not supposed to just drop her off), Miriam, Benjamin, and I stayed inside all day today. I've still got a bit of a cough and it was feeling really deep today (if you know what I mean) so we just didn't go anywhere. I did, however, scrub the shower and read approximately five million books to Miriam and hardly ever put Benjamin down. This was my view for most of the day: 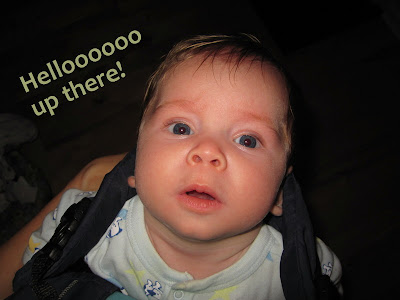 In the afternoon the kids spontaneously coordinated their naps. Miriam hasn't taken a nap since last week sometime so I didn't bother trying to make her take a nap today, either, but I did make her play quietly while I fed Benjamin and put him down for his nap. When I came back from putting him in his bassinet Miriam was on the couch, fast asleep. 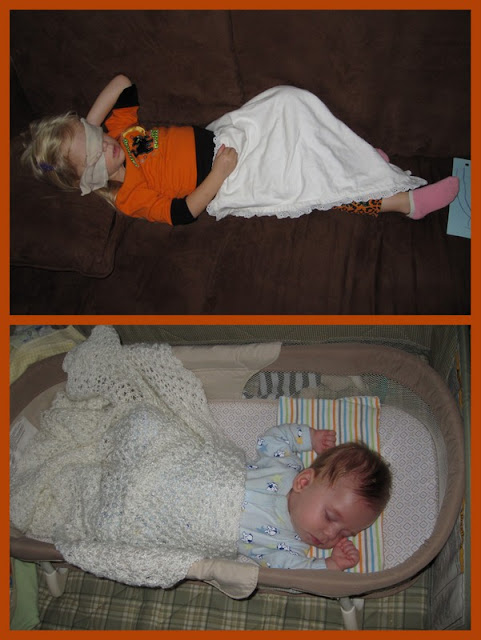 I worked on our family newsletter while they slept and by the time they woke up it was just about time to go meet Rachel at the bus stop again. Obviously nap time came a little late and I certainly paid for that later on in the day.

Today is pancake day (in case you didn't know; at our house we always know), so we had pancakes for dinner. Naturally. Andrew wasn't home for dinner but the girls have picked up his love for pancakes and Rachel remembered that it was pancake day so pancakes it was. I like pancakes but I do get bored of them so today I thought I'd make some apple cinnamon pancakes to shake things up a bit, but then I opened my fridge and a big ol' sweet potato was staring me in the face so I made sweet potato pancakes instead.

Rachel saw me preparing the sweet potato and started hyperventilating.

"I thought we were having pancakes for dinner! It's pancake day! You remember that, right? Today's pancake day. We have to have pancakes! I've been planning on this all week!"

"Relax. We are having pancakes."

"Nooooo! I don't want potato pancakes! I want just regular pancakes. I just...I just...I just wish Dad was here to make pancakes for dinner because you're doing everything wrong!" she wailed as she fled from the kitchen to scream in her pillow.

She came out a while later to check on me.

"What?! Those look like regliar* pancakes!" she said (*regular).

"Right. I just mashed up the sweet potato and put it in the batter. It will taste like pumpkin bread...only in pancake form."

"But I want sweet pancakes today, not potato ones."

Let it be known that a somewhat regliar Heiss tradition is to have potato pancakes with beef stew around Christmas. Clearly that's a savoury dish and clearly a savoury dish is not what Rachel wanted.

We ate almost the entire batch, so even though Rachel still acted disappointed that Daddy hadn't made boring regular pancakes I'm pretty sure she enjoyed them. 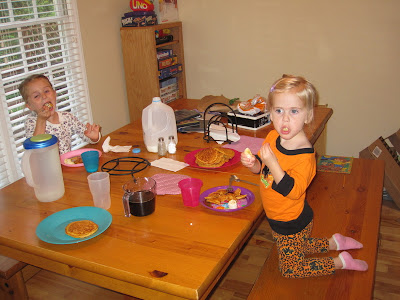 I tried to have the kids in bed earlier but we barely made it to be by eight o'clock and then the girls kept coming out of their room for anything under the sun. Rachel finally fell asleep between 9:30 and 10:00 but Miriam was up and down like a yo-yo for almost an hour after that. I seriously don't get it—on Monday and Wednesday when Andrew was gone until 10:00 and 11:00, respectively, the girls stay up chattering, getting drinks, going potty, needing chap stick, etc.... but on Tuesday when I go out they go to bed early and stay in bed? How is that even remotely fair? I mean, besides the part where I went out and left Andrew with the kids...because when he's out and leaves me with the kids they go wild and crazy. It can't just be me because I'm the one who got them ready for bed on Tuesday as well.

I don't understand how parenting works.

I think by the time I figure it out my children will have all left home.