But then while Andrew was at school one day I tackled the master bath. It didn't have anything to do with Emily posting pictures of her bathroom. Rather, I think it's because bathrooms are usually the smallest rooms in the house and organizing the smallest room in the house felt doable. So I did it.

Without further ado, here's our bathroom: 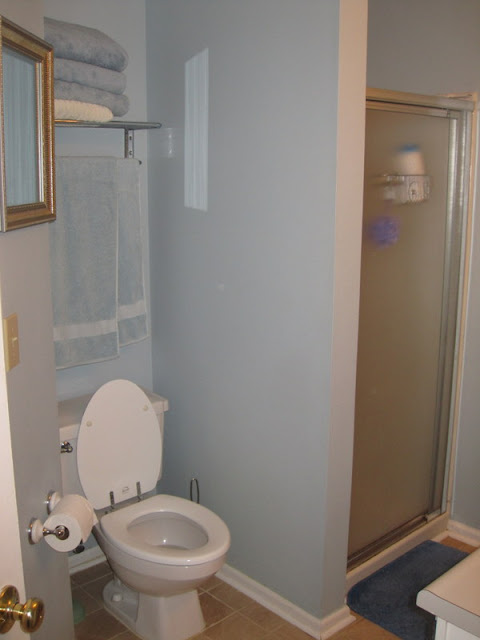 Our closet is off our bathroom—there's a doorway, but no door, which is kind of strange but I suppose that if the closet had a door there would be too many doors for that small space to handle. Our bedroom door opens into the bathroom door, which opens into the closet. I will show you our closet but don't make fun of it—we haven't really organized it yet: 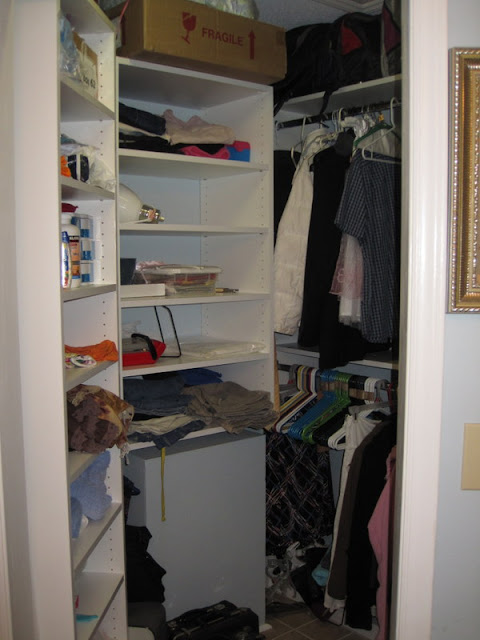 I'll even show you the bedrooms and bathroom in the other wing of the house. I use the word 'wing' lightly, by the way.

Here's the bookshelf in what will eventually be Benjamin's room (it's built-in): 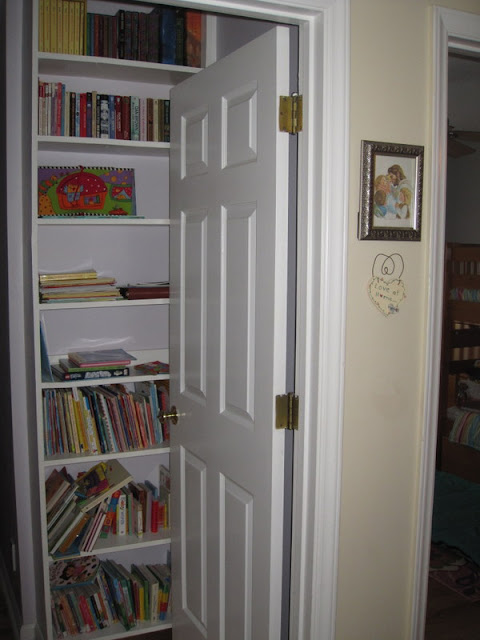 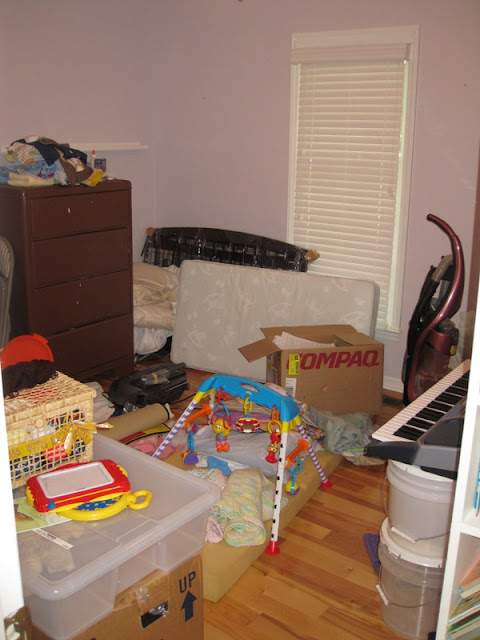 This room is obviously our staging area. The crib is in the corner and likely won't be set up until next year because Benjamin is camping in our bedroom for the time being. The keyboard will likely stay there, balanced on our buckets of food storage because we don't have a keyboard stand or anywhere to put our food storage—it was a match made in heaven. The rest of that stuff will find a home eventually, I'm sure.

The walls are purple, which is, perhaps, a slightly inappropriate colour choice for a boy's nursery. That may or may not change. However, since I am so totally not an interior decorator I'm almost leaning toward it not changing. I've never painted a wall in my life, though I did once help my friends paint their fence while their mom was gone (and her brother (whose name, coincidentally, is Benjamin) convinced us that the paint was chocolate and we ended up painting ourselves and everyone got in huge trouble; the end) and I will probably help paint our shed in the near future.

That future is so near that I have colour chips sitting on my desk at this very moment. Andrew picked them up at Lowe's today and left me with the unsavoury task of selecting the colour that most closely matches our house (as per the rules of the HOA).

I was dreamily drifting along a sea of calming blueish-greys as I flipped through the colour chips until I stumbled upon Going Gray. Whoever named that particular colour has guts (and definitely made me laugh).

Anyway, back to the tour...

Here's a view down the hall to the bathroom: 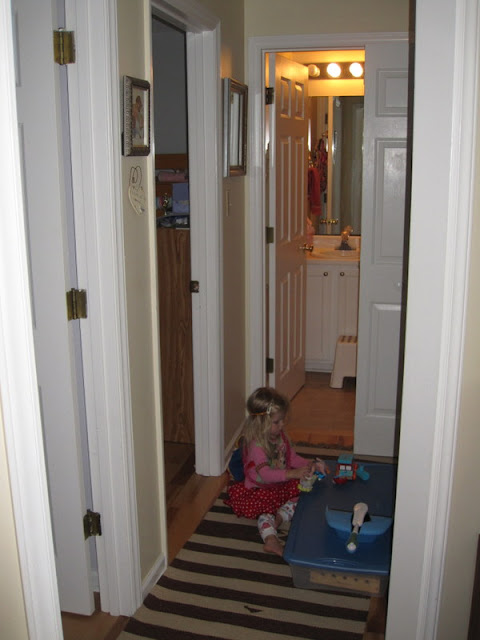 Miriam was playing in front of the laundry closet so I couldn't open the doors all the way but I'm sure you can imagine what the rest of my dryer looks like: 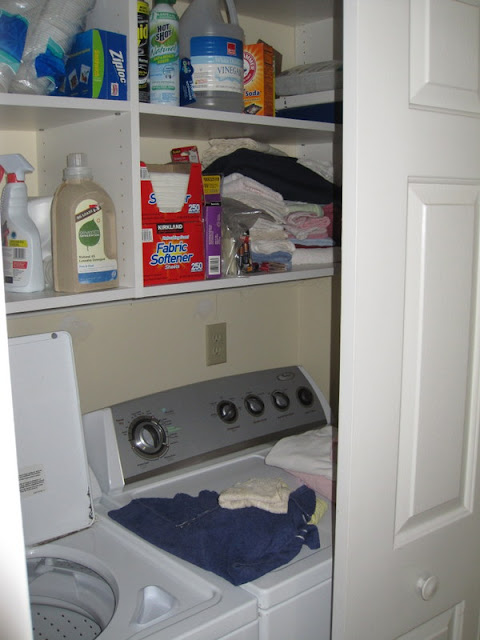 Next up is the girls' room. Their walls are a light blue colour but it's the only room in the house that their bunk bed would fit in, so while they wanted the room with purple walls it simply didn't work out and they got blue. Grandma helped get this room organized before she left which is why it is in comparatively good shape: 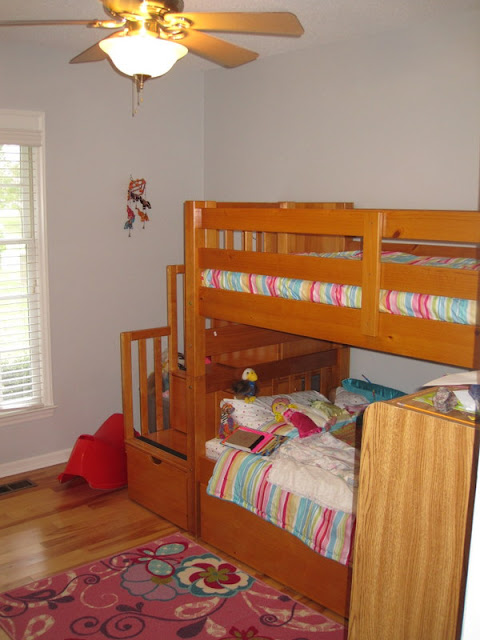 And looking into the other corner: 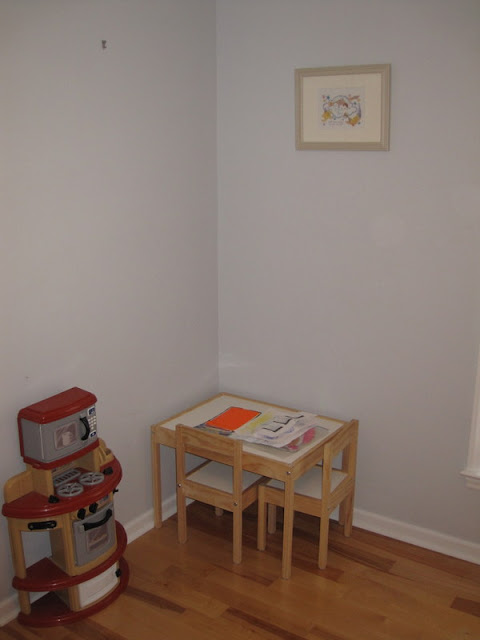 And looking back at their bed: 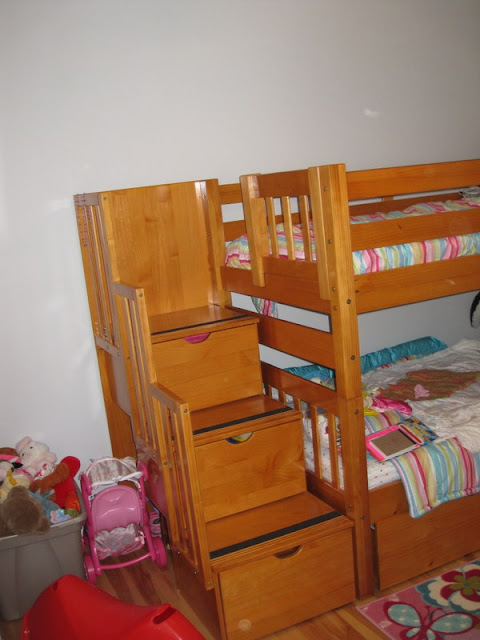 The top of the dresser is where Rachel puts anything she doesn't want Miriam to get into: 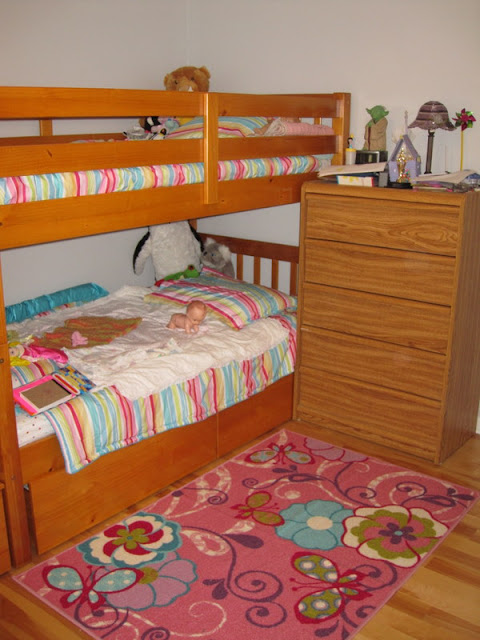 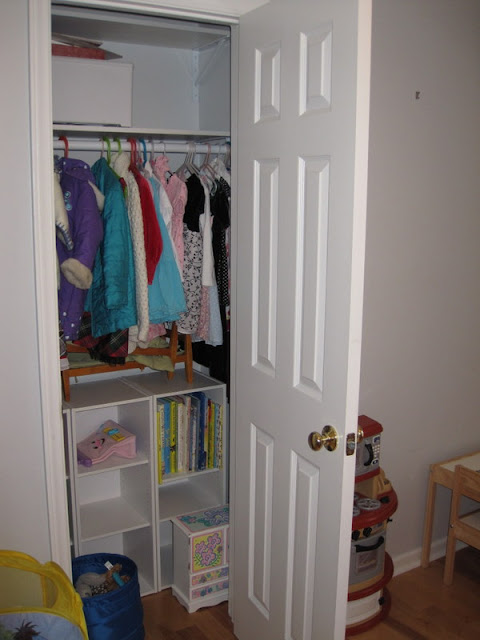 We're still working on their bedroom (obviously there are some things in Benjamin's room that belong in their closet) but so far it's the most organized room in the whole house. 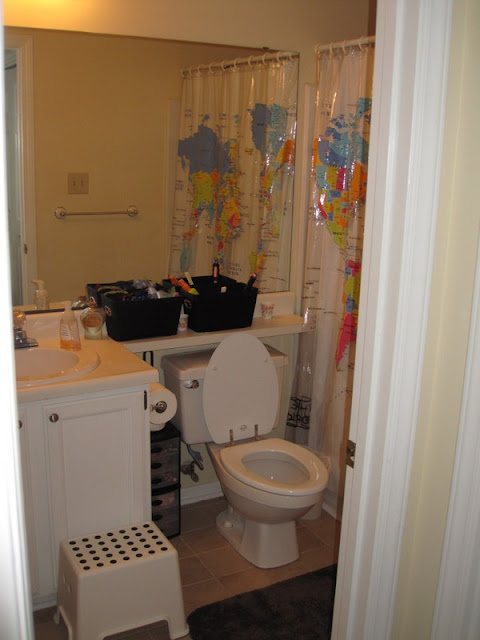 As a special treat I'll show you the living room. I made the girls clean it up before dinner tonight—we had a picnic dinner of homemade pizza in the living room while we watched The Lorax (which we really enjoyed). Cleaning up our picnic dinner was almost easier than cleaning up when we eat at the table—I just picked up the blanket the girls ate on and threw it in the washing machine and clean up was over (except the dishes, which are in the kitchen, which is why you don't need to see the kitchen right now (because I'm also in the middle of making deviled eggs for our ward "Pig Pickin'" tomorrow (apparently that's a southern thing))). 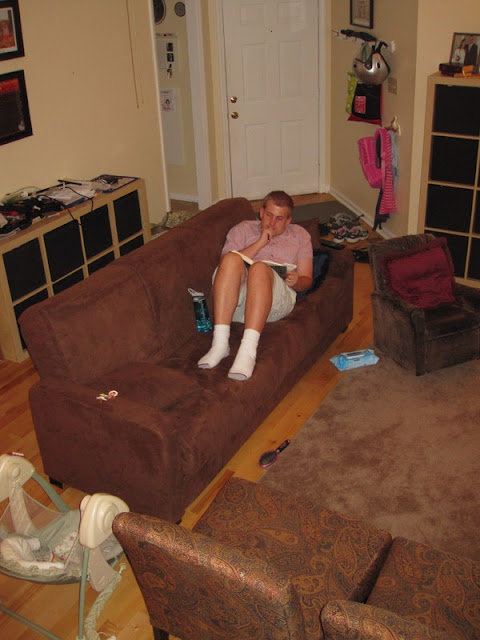 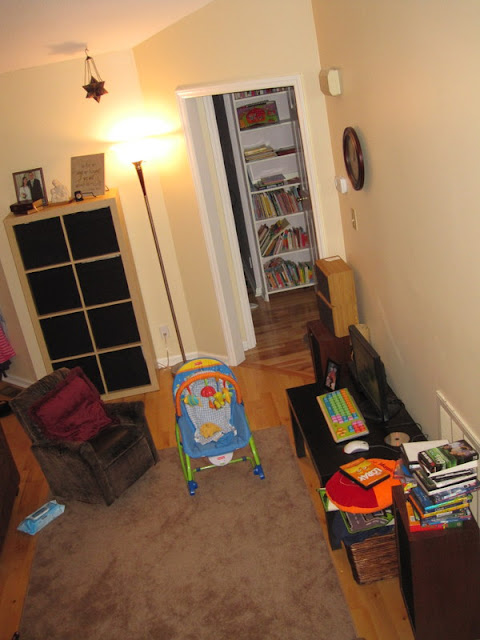 So far I think I like the way this wall turned out: 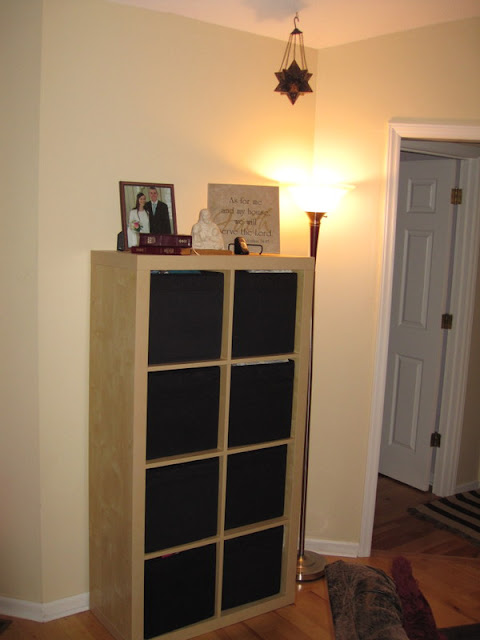 We keep our shoes, our swim things, our winter hats and gloves, our baby carriers and diaper bags in the black bins—pretty much anything we'd need when walking out the door. I'm not sure if the winter stuff needs to be there all year round (or if it even needs to be there at all (or if we even need as much of it as we've got))) but it's there (top, righthand bin, in case you were wondering).

Right now our table is piled high with frames (we're using about half of it for eating) and it's driving us bonkers so we've been trying to put our pictures up on our walls. Unfortunately, as I've mentioned, I'm no interior decorator so deciding where to put the pictures is torture.

I has a few spare minutes the other day and was looking for a task to fill the time. Andrew said, "Oh, I know something that should be fairly easy and shouldn't take very much time!"

He led me to the kitchen table and said, "Just decide where you want to hang all these pictures and I'll put them up for you later."

I looked at him with big eyes. His offer was sweet but completely misplaced.

He was bugging me about pictures the other day again and I eventually told him to just go ahead and do whatever he wanted. We ened up with this: 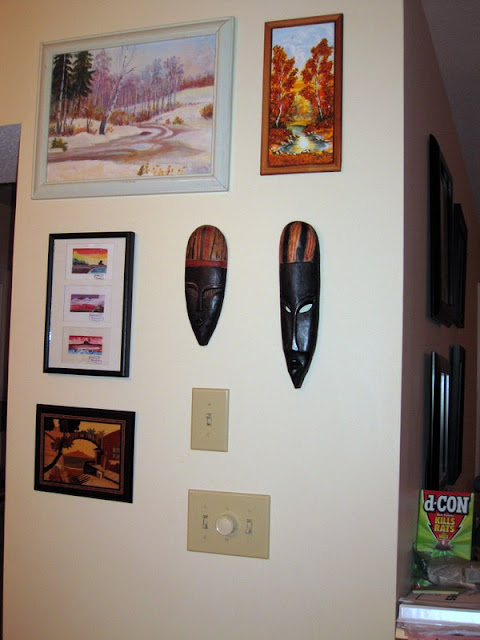 The painting my host family bought for me at a street market in Voronezh is on the top left and another painting I picked up while I was in Russia is beside it. In the middle are some paintings (2012) and masks (2011) Andrew got in Ghana. And on the bottom is a wood mosaic of sorts that Andrew got in Italy while he was on his mission.

And that's all of our house that you're getting for now. Stay tuned for the rest...I'm off to nurse a baby again (that's one of the main reasons I get nothing accomplished ever).
Posted by Nancy at 12:23 AM