Two and a half snow days preceding a weekend has been a little tough on my sanity. We've done a lot of playing outside and a lot of playing inside and every now and then I've rallied the troops and we've done some chores together. But honestly, we were starting to go a little crazy by today. Or at least I was.

Snow days are different from ordinary days off of school because there's nothing to do. The city literally shuts down so the only thing to do is play in the snow and that's all fine and dandy except that it's cold and it's wet and it generates a ton of laundry and muddy footprints. And then the snow melts and you're left with mud and, if it's today, a ridiculously cold wind. It was too windy to enjoy playing outside and Daddy took the car to school today (a make up day for one of Duke's snow days) so we were stuck inside with each other all day. Again. And things got intense.

So I pulled out a box of Barbies from my childhood that I've kept tucked away for however many years (but first I made the girls clean up their entire room, including their closet). They were so excited to explore the contents of that box. Inside are the Barbies I had as a child as well as the Barbies my mom played with as a child, a lovely collection spanning from the 1960s to the 1990s. The girls have a few Barbies of their own, of course, so today they were playing with 50+ years of Barbies. 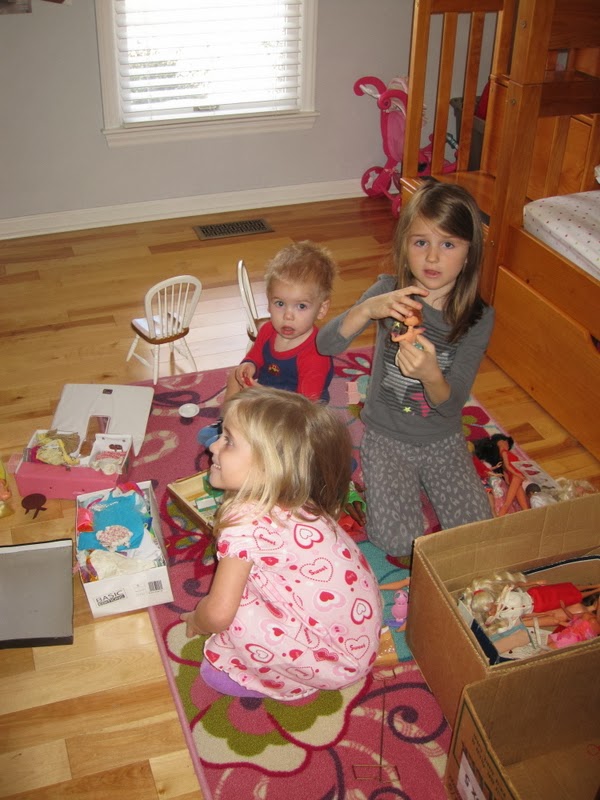 As Miriam pulled my 'New Kids On The Block' doll out of the box (I always wanted a Ken doll but never got one (and I wasn't a NKOTB fan (I'm not sure I even knew who they were exactly—I wasn't really into pop culture as a five-year-old (they disbanded when I was nine and I wasn't even into pop culture then)) but I looked it up just to check and I'm pretty sure I have the Jonathan doll)) she exclaimed, "Ooh! There's a prince!" 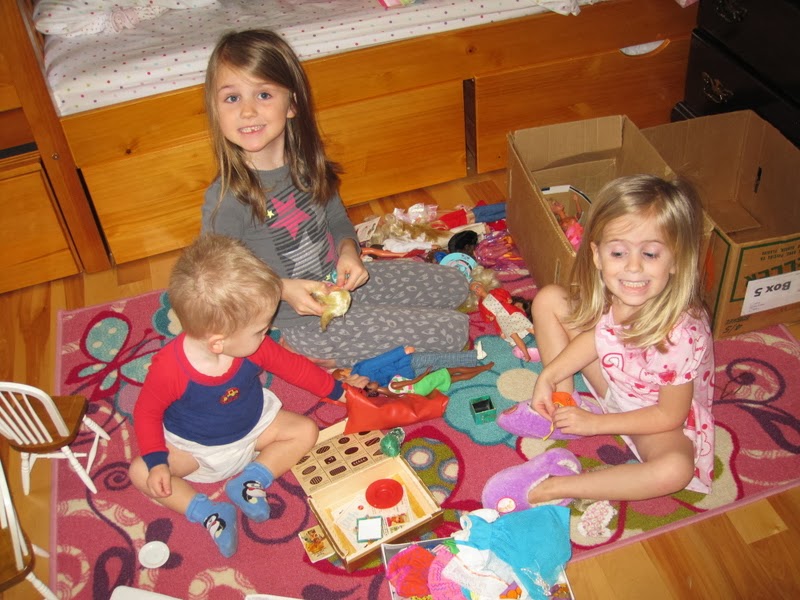 My mom had a talking Ken doll (you'd pull the string in his back and he'd say stuff (though his voice box had stopped working by the time I inherited it)) but he's in rough condition. His head pops off at will, as do the limbs on his right side. The girls dressed him up and put him in a hospital bed. "That way he can still be part of the game!" they said. "He's the dad but he's very sick so he just stays at the hospital. But we can go visit him if we want to!"

There are baby dolls and kid dolls and teenager dolls and adult dolls and clothes from every decade.

The girls had a blast! They were in their room for hours!

Rachel quit in the middle of the afternoon. She worked on some valentines for her class (she has five left—we will finish before Monday!) and then went to Diego's house to play. Miriam played straight through the day (and stayed in her night gown all day as well). She wanted a picture of all the Barbies she dressed up before cleaning up for the day. 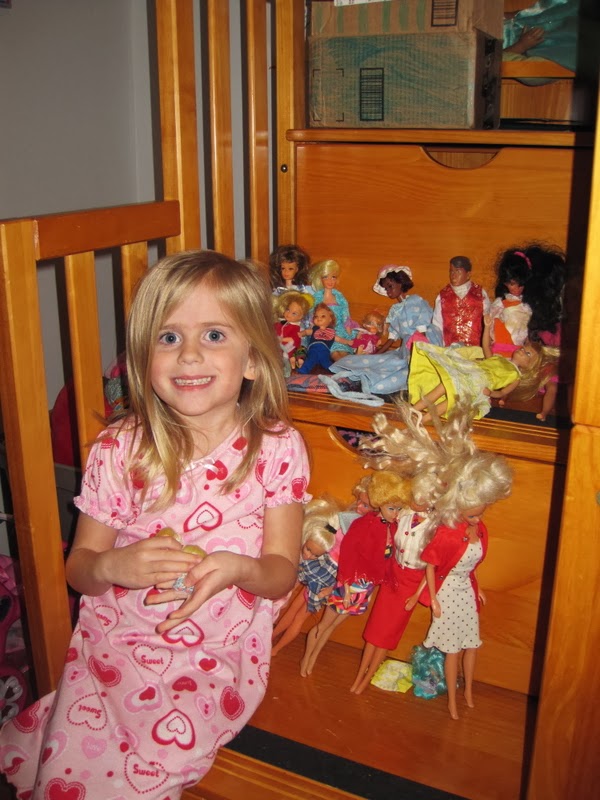 Benjamin was quickly banned from the premises because he yanked off two doll heads in the first thirty seconds the box was open. That meant it was up to me to entertain him all day long since my usual entertainers were busy with the Barbies.

I hate to admit it but he's been driving me bonkers! He is into everything all the time.

His only saving grace is nap time: 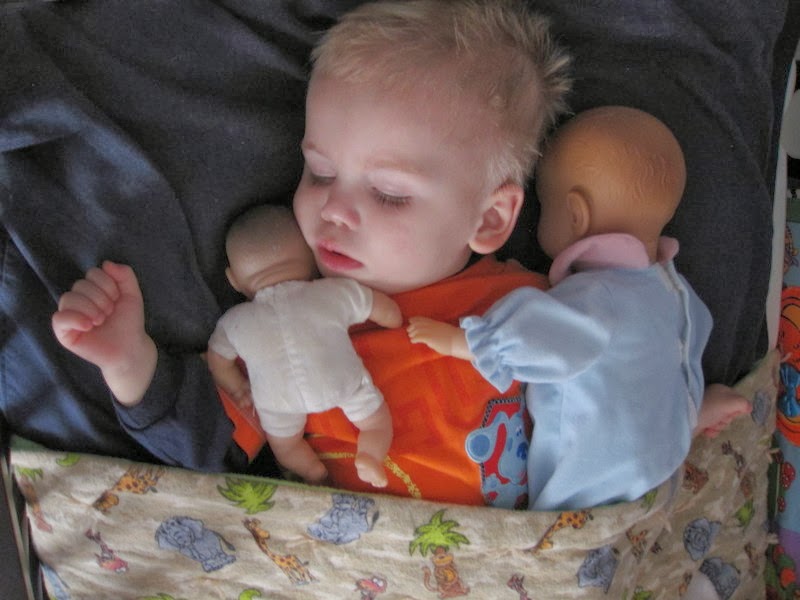 And perhaps his cute face: 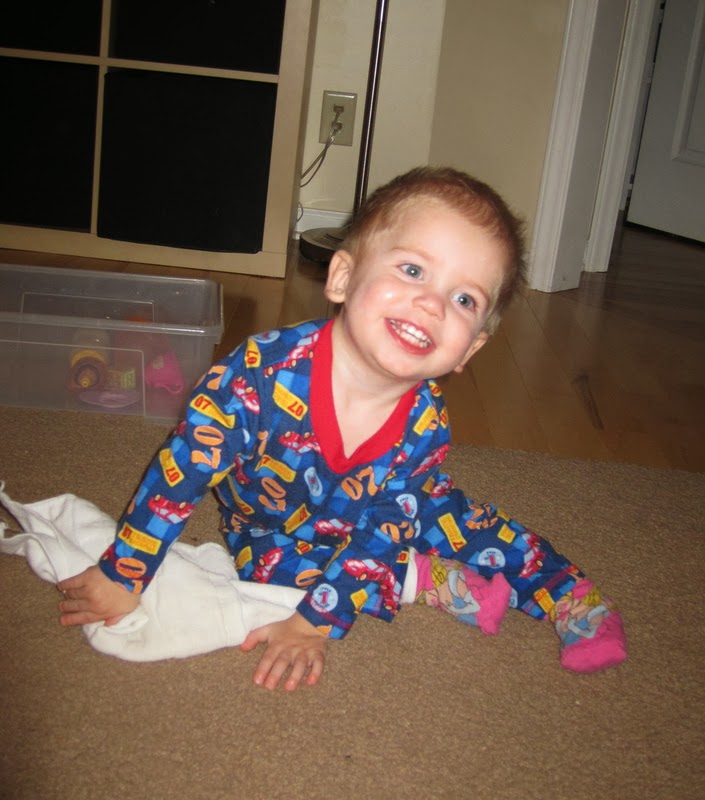 Tonight he insisted on wearing Miriam's princess socks with his car pyjamas (and over his own penguin socks). He was in quite the rage trying to communicate this to me but I finally figured it out (I can be a little slow sometimes). After he had the socks on he had to show them off to everybody.

"Gawks! Gawks!" he said, climbing onto Andrew's lap and lifting his leg up into Andrew's face. "Gawks!"

"He is trying to show you his awesome socks," I explained.

Gawks is kind of a new word for Benjamin.

"Those?" Andrew snickered. "They're lovely."

Whatever floats his boat gets him into bed.
Posted by Nancy at 12:44 AM