The 2014 Olympics began in Sochi, Russia, today and it's also my ten-year anniversary of teaching English in Voronezh, so I'm in the mood to celebrate.

On Tuesday I dug out the "shawl" I made in Russia when I was learning to crochet. It's a beautiful bubble-gum pink and the yarn is so incredibly soft. I wanted to make a blanket but after I eventually bought all the pink yarn at the market (a chaotic square filled with stalls and tents, merchants hawking their wares over shoddy wooden counters, children running around with cabbage leaves on their heads) they never restocked, so this is as far as I got: 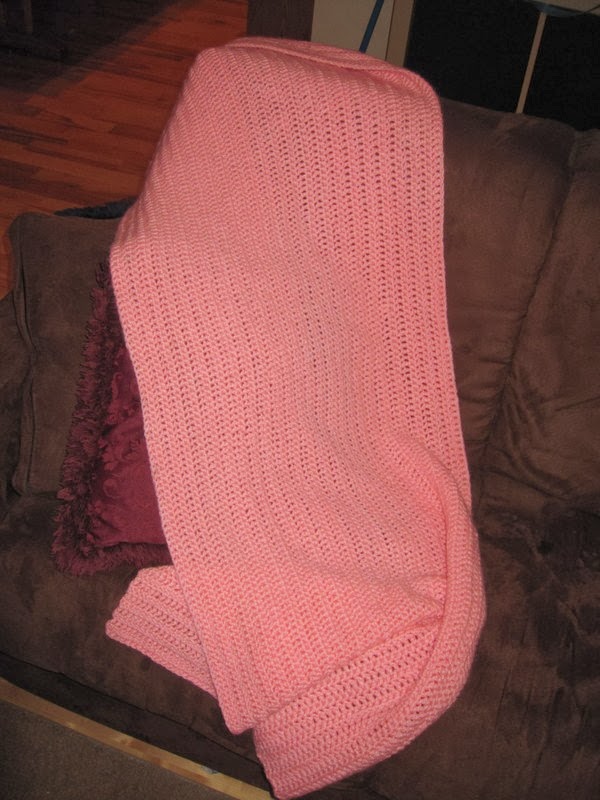 A few of us went to Russia already knowing how to crochet. Those few taught the rest of us and we'd sit around crocheting and talking until late at night during our sleepovers (when we'd cram eight girls into an apartment with one bed in it—I usually slept on a chair, other slept on the couch, on the floor, or wherever (they weren't particularly comfortable sleepovers)). I worked on it at home when I was lonely in my bedroom (I fear my host family found me a bit reclusive; I tried to be outgoing but living with a foreign family in a foreign country is a lot of work). I worked at it after teaching lessons in the mornings. It was certainly an on-going project.

I remember once when Rosa, the elderly janitor-woman, saw me working on it in the hallway of the kindergarten. She smiled and told me it was a beautiful shawl. I smiled and said it was going to be a blanket.

Rosa! We once gave her a cupcake with chocolate frosting and she didn't seem to have the slightest idea of how to eat the treat. She certainly enjoyed it but she ended up with chocolate smeared all over her face—much like you'd expect find a two-year-old.

Among other quirks, Rosa habitually watered the fake plants. We all had a hunch she wasn't entirely there. Of course, we were the ones teaching English to a large group of wild kindergarteners in a condemned wing of the school. There were biohazard signs on the doors, which were usually kept locked. But they opened them for us to teach our lessons down there—I'm trying to recall if we even had lights or if we had to depend on the natural light that filtered through the windows. I know that the light we had was dull and our classrooms (which consisted of a hallway, a large room with fancy/creepy faux-bas-relief scenes of animals adhered to the turquoise walls, and a changing room for the pool (complete with electric hair dryers)) were always a little dank.

Things got a little busy when classes were doing their swimming unit. Lines of children would file past to take a dip in the pool, which looked to be the reason (or part of the reason) the wing was condemned (we—or at least I—sneaked into the pool area to take a look once (it wasn't pretty)).

The only other time they used our wing was when the kids had to get a vaccination of sorts. They literally lined them up like cattle and poked them in the arm in turn, sending them off sniffling and rubbing the injection site.

We had our opening exercises (I don't remember when we called it now) upstairs in the gym once (or a few times) when the school was undergoing an inspection (so they couldn't open the condemned wing—our usual classroom—since it was condemned and all). It was a nice change of pace.

We held our "спектакль" (spektakl—show) at the end of the school year in a beautiful room they had tucked away somewhere in the school. Who knew they even had such a nice place? Hardwood floors, burgundy drapes, chandelier—oh, and weird faux-bas-relief scenes on the wall.

It was an experience, to be sure. And I've carted that unfinished blanket around with me for ten years as a memento of my time spent there. I'm not sure why (why I kept it—I know why it reminded me of Russia but I don't know why I kept it). I mean, the yarn is incredibly soft, but I don't know what I was ever going to do with it, so on Tuesday I pulled it out, called it a shawl, and gave it to my friend Terry to take to the hospital with her. She volunteers in one of the cancer wings and last year she asked for donations of shawls to wrap around the patients when they get cold (bed covers don't do much to keep your shoulders warm when you're sitting up in bed).

I was a little sad to let that blanket shawl go, but after ten years of sitting unused on a shelf or in a box, it was time to let it have a life of service.

Today I'm laughing a little that I never really finished the blanket and instead decided to (finally) call it a shawl, as I'm watching pictures pour in from the unfinished Olympic village of Sochi.

I miss the way my host-parents would only chat with each other in the bathroom with the bathtub running.

I miss the way you turn off the gas line to the radiators in March even though it doesn't get warm until May.

I miss feeling relief whenever I'd see my bus stop—морожено—approaching, knowing Oksana (my host-mom) would have cooked up something warm, if not delicious, to eat. She knew I liked Korean carrots (корейские морковь) and would often bring some home from the market to eat with dinner.

I miss the kids, I miss buying cookies at the bus stop, I miss walking to church from the McDonald's, I miss six hours of church with choir in between each three hour block, I miss the internet cafes, I miss having to ask for water "без газа," I miss slipping and sliding on the walkway while keeping an eye on the balconies above (for fear of falling icicles (or balconies)).

I miss a lot about Russia, including the food (though I still have a hard time swallowing cream of wheat) so tonight I made plov (or pilaf or whatever) and, as Miriam said, "This isn't so bad, Mom!"

Somehow I managed to both burn it and not cook it all the way through: 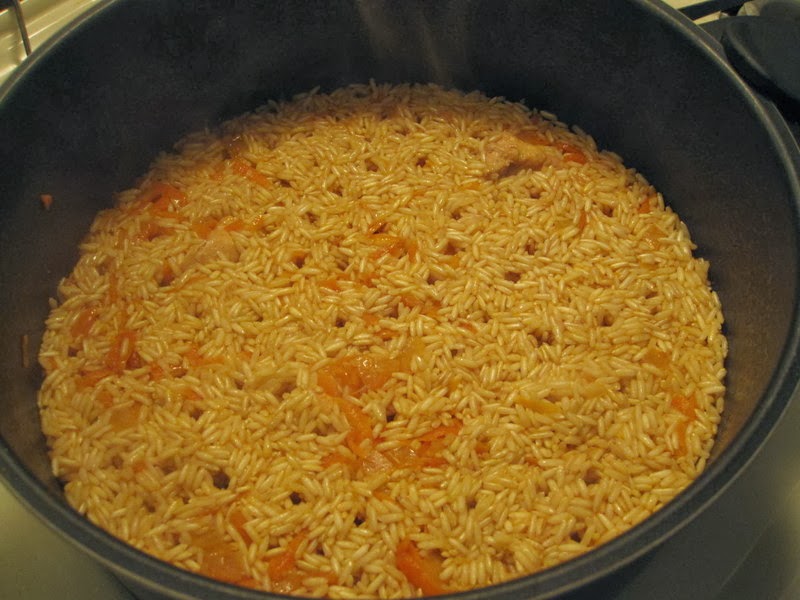 The rice was still a little crunchy but if we didn't scrape the bottom of the pot we couldn't even tell it was burned (see—not so bad at all!). I'm not sure the kids were very impressed (especially because I served beets with it—they should just be grateful I didn't serve them beets with mayo!) but I thought it tasted pretty good (I'll just have to see if I can't soften that rice up a little more).

That's about as far as my celebration has gone, but I think I'll have to drum up something a little more popular (like perogies) and fun (like a party). An alumna of my Russia group happens to live in town...
Posted by Nancy at 11:36 PM

Email ThisBlogThis!Share to TwitterShare to FacebookShare to Pinterest
Labels: Russia