Oh, what do you do in the wintertime when it's rainy, wet, and cold?

This week, as I mentioned, has been mostly cold and rainy, which means Andrew's been taking the van to school, which means that we've been trapped at home. For the most part this has been okay because Benjamin has a nasty cold—his nose has been replaced by a mucus faucet—so we probably would have skipped playgroup anyway.

Just because we would have been staying home anyway, had we had the van, it doesn't mean that we didn't have any stir-crazy moments. Fortunately Benjamin and Miriam are both pretty good at creating long-lasting games and we can usually entertain each other until Rachel's bus finally pulls up.

Today Benjamin spent some time pushing babies around (and around and around) in strollers: 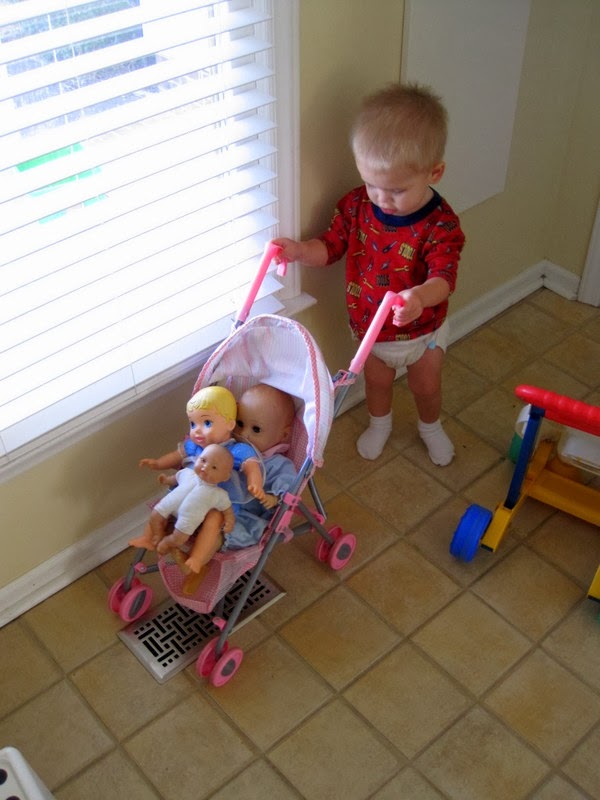 Miriam redesigned her Elsa costume to be a little more icy, replacing the black leotard with a white lace dress (good call). She then performed 'Let It Go' for us. She takes her performances very seriously. 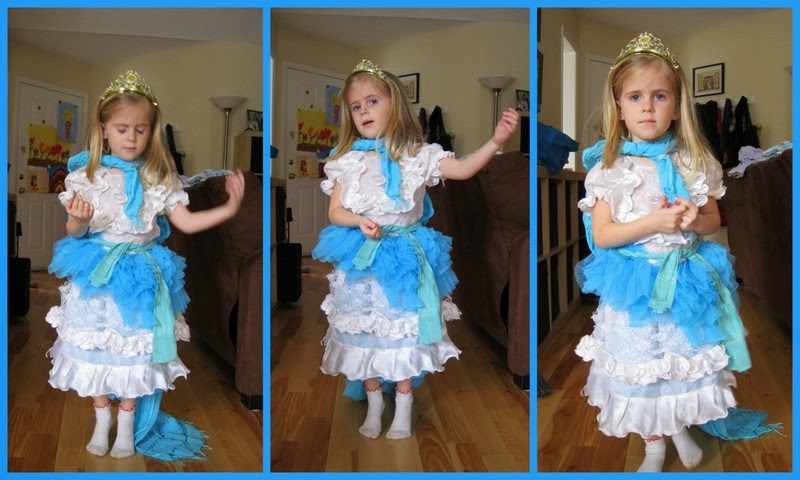 Benjamin sat on the floor with me while we watched. 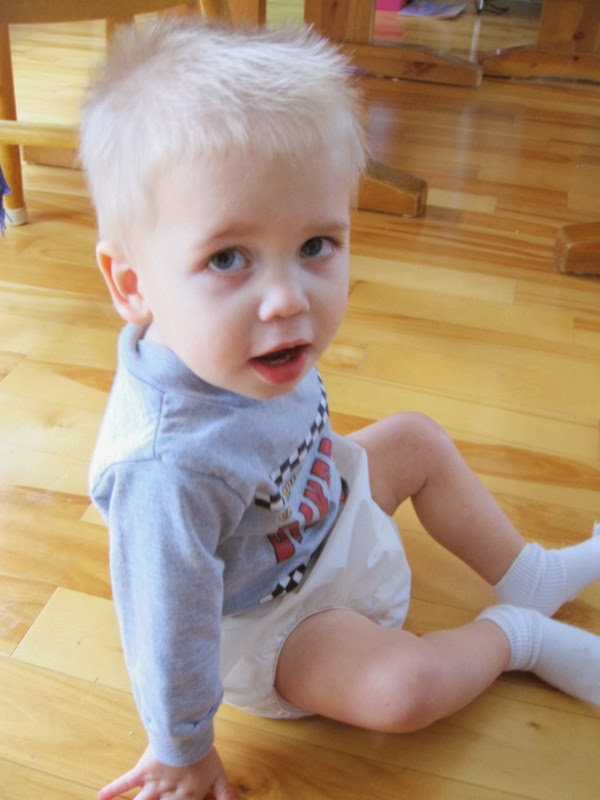 When Miriam's song was over he got up on the "stage" to perform as well, except he didn't have anything planned so he just stood there and stared down the audience. 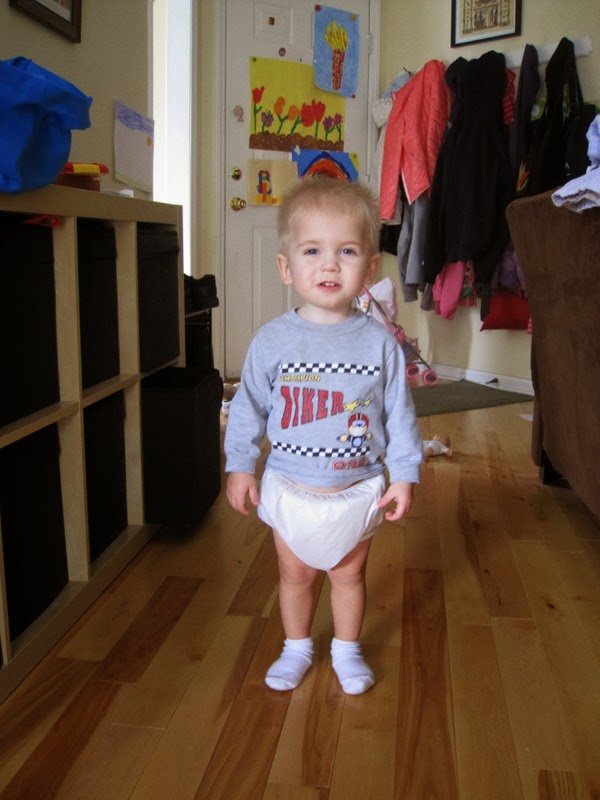 Fortunately for us, it was warm and dry enough to play outside today so we headed out to the swing set. That thing is worth every bit of effort it took to get it set up. 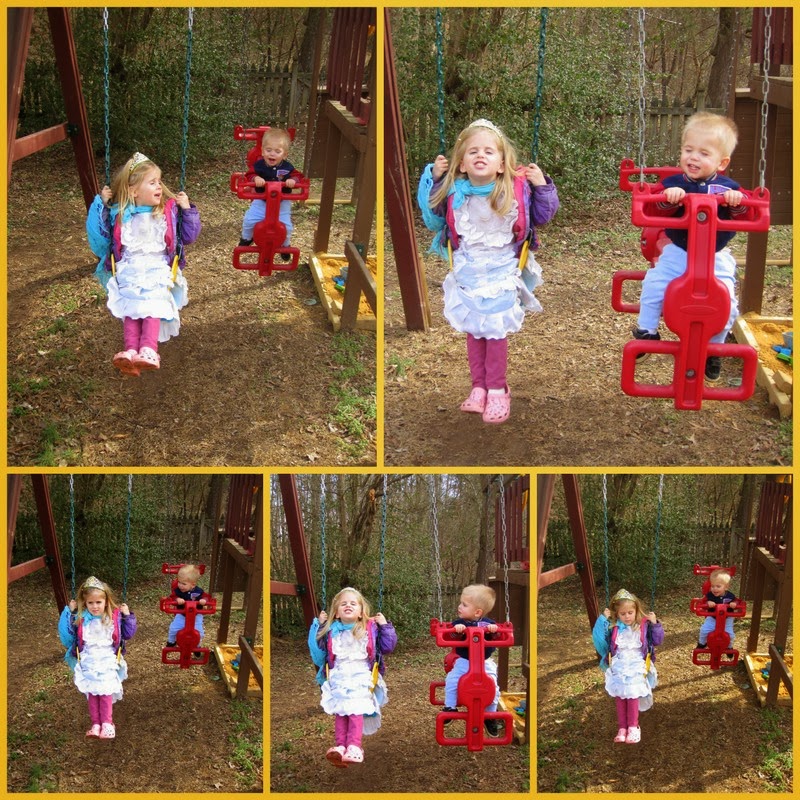 Miriam insisted on going out wearing her Elsa costume. I warned her that it was muddy and suggested she'd be more comfortable playing in regular clothes but she didn't agree so I asked her to at least put on a jacket.

"Why? How cold it is? Is it super cold or just medium?"

"I think it's...medium," I answered cautiously. Her scales don't always match up with mine.

In the end—after much debate—she agreed to put a coat on under her cape and even allowed me to make her cape shorter (by folding the scarf in half before tying it around her neck again). I think she was much happier that way. 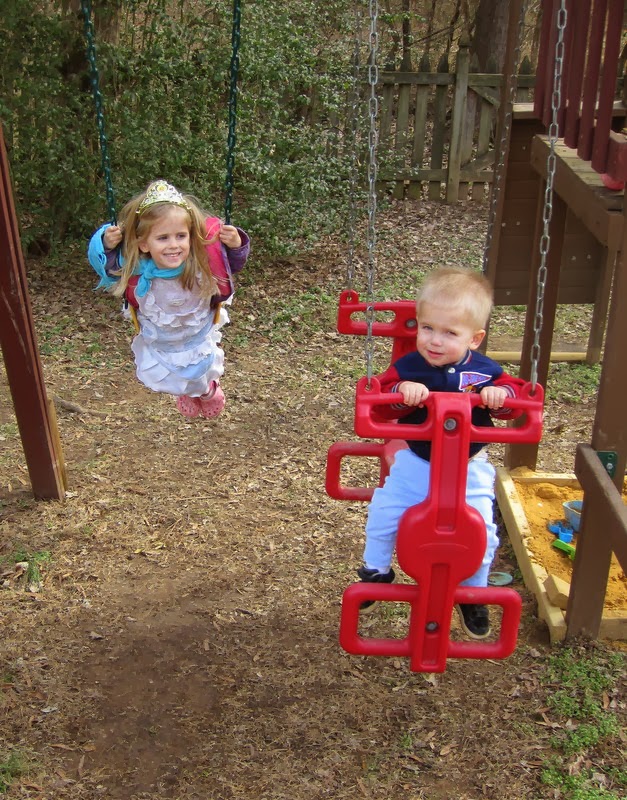 At least she was until she went down the slide. That thing is lightning fast, even more so when you're wearing layer upon layer of silky skirts. Miriam went sailing off the end and landed sprawled out on her stomach. Terrified, she leaped up from the ground to assess the damage.

There wasn't, fortunately (not that I actually care about that dress—it's a hand-me-down dress-up from her older cousins and has seen much better days—but I do care about the girl that cares about the dress), and once she realized the dress was okay she turned her attention to her body.

Now those? Those were muddied up and a little banged up, too. She'd obviously used them to break her fall. She stood there shaking, staring at her hands and sobbing.

"Let's go inside and clean you up," I urged.

She bravely stumbled along behind me and after we washed the mud off she felt much better about life. Funny how she didn't care when she plowed Benjamin over as she raced to the swing set when we first got out to play. The poor little guy was facedown in the muck, just as she ended up when she went off the slide, but all she did was look over her shoulder and say, "Oh, oops!"

I made her come back, help him up, and apologize.

"But I didn't meant to knock him over!" she said, offended that she should have to fix something she didn't do on purpose.

He howled for quite some time (he gets a little over-sensitive when he's sick) but eventually cheered up long enough to start playing. But you can (maybe) see some leftover tears glistening in his eyes in this video of him talking about the birds (he's an avid birdwatcher):