Okay—you got me. The sun always shines, the birds always chirp, and the grass always grows here. But February is different from January. It's just less gloomy somehow.

But February happens before the bugs make their spring foray so we can garden without fear and eat on the deck without being attacked and leave the windows wide open without having anything sneak inside. It's beautiful.

We spent much of today outside. But first we had to clean up the living room so we could relax on the couch and read books: 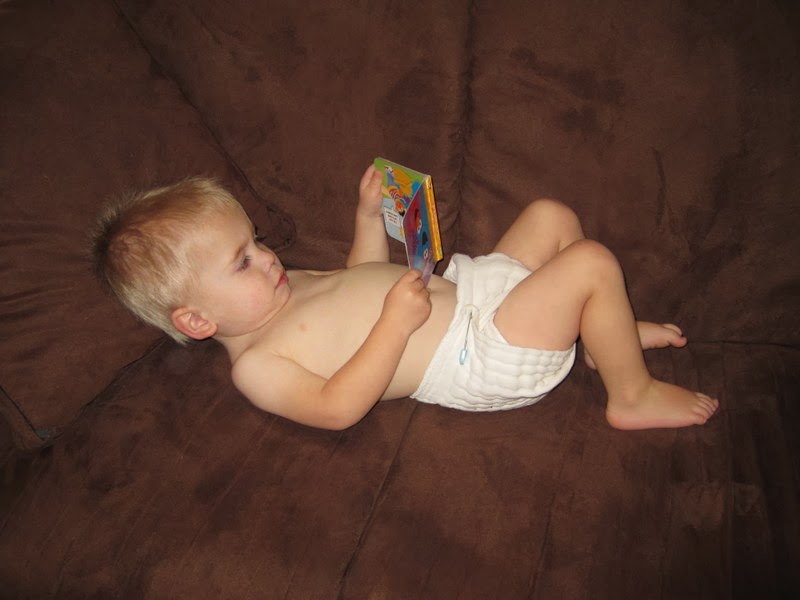 Just kidding. We had to clean up the living room so we could put down our new area rug. I've been looking for one on Craigslist (my main shopping center) and found one yesterday that someone was selling brand-new for almost free! I'll admit that I would've preferred something a little more funky and a little less beige (technically it's 'pecan') but it'll do. It's twice as big as our old rug which means the couch and chairs can sit on it rather than on the wood (which means Benjamin will have twice as hard of a time pushing the chairs around the house)!

He was certainly enjoying the carpet. 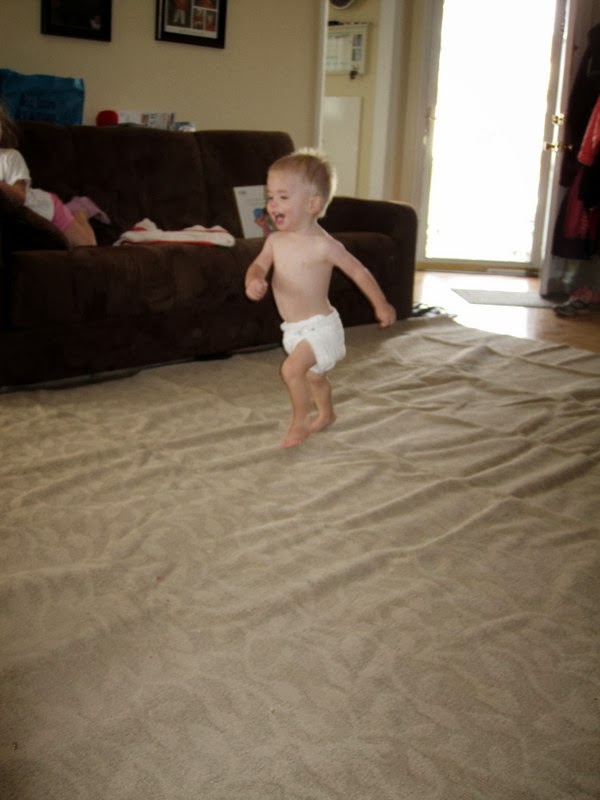 After we got the living room resettled we went outside to hang up some laundry and to work in the garden (and to play, of course). 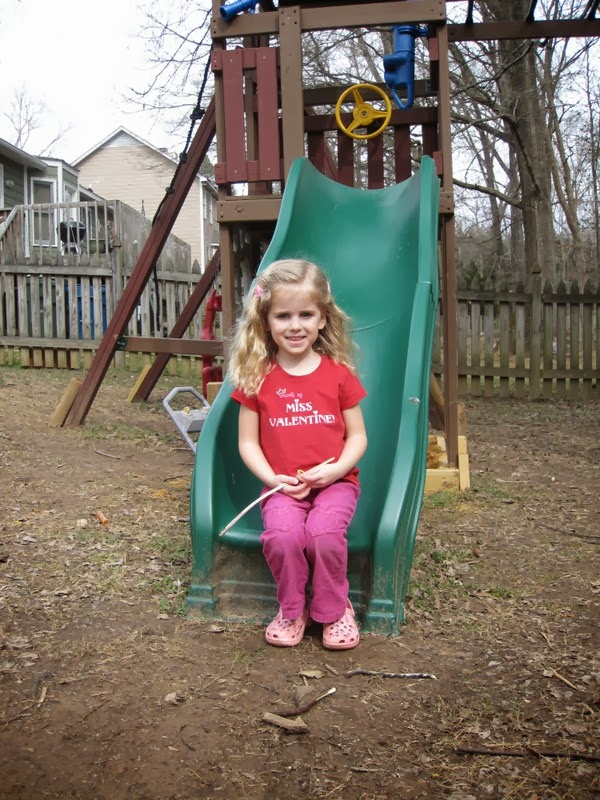 We did some weeding and spread a layer of bokashi compost at the bottom of one of the garden boxes. We found a bunch of big, fat grubs in the garden so we dug them out and put them in a container to observe. 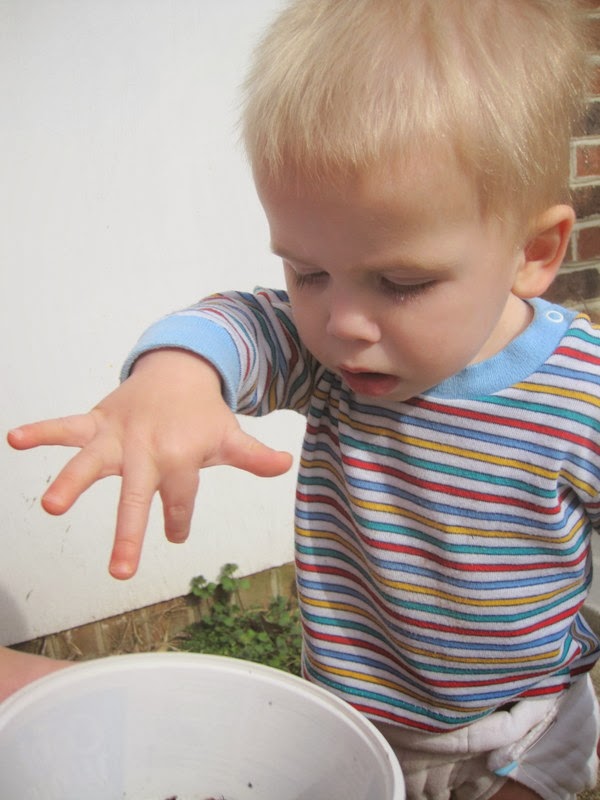 Benjamin wanted to know if they were snakes. "Sssssss!" he said.

"They're not snakes," Miriam said. "They're bugs!" 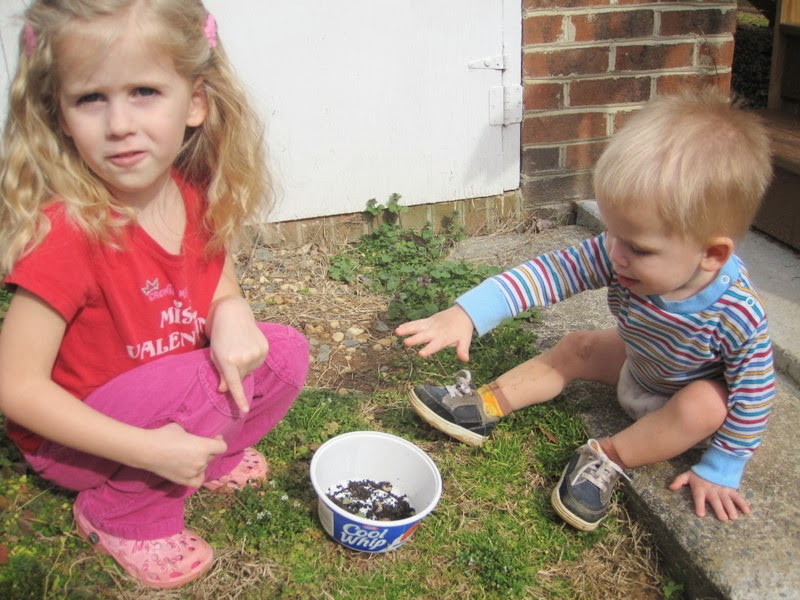 He thought they were fascinating. 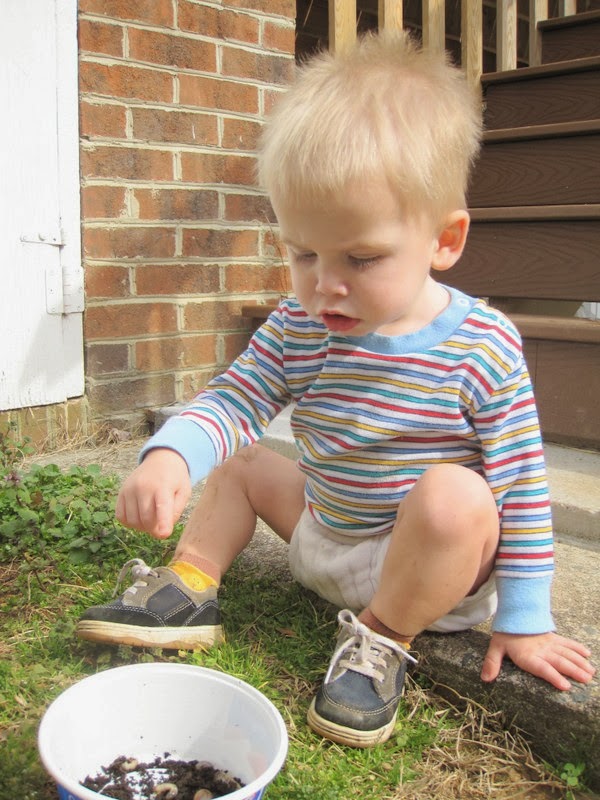 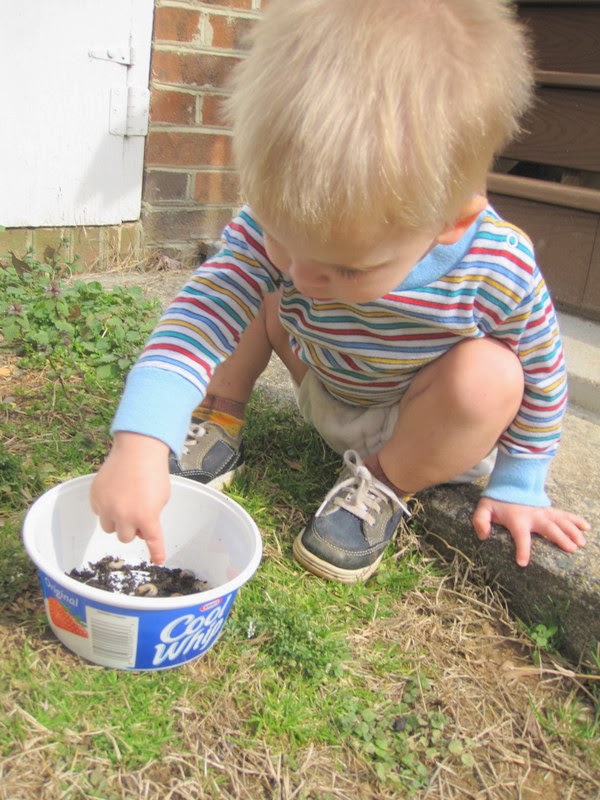 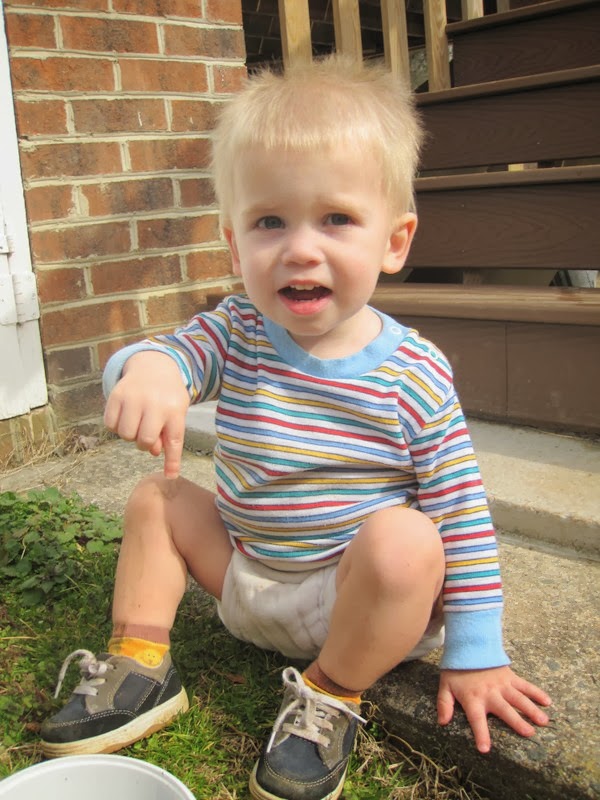 Some of the grubs were huge, some were small. We also pulled out a couple of snails and some nuts of sorts that I'm assuming a squirrel decided to hide in our garden. 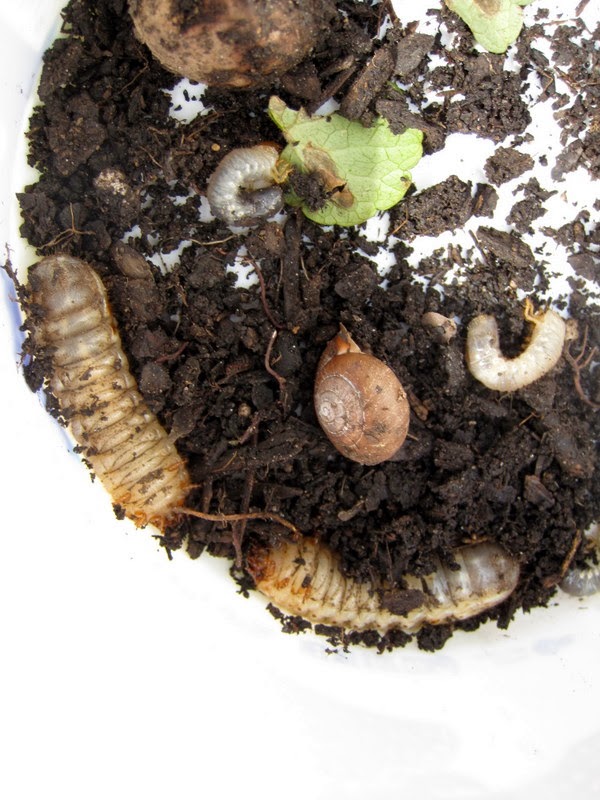 Here are some more pictures of the littles ones observing the bugs: 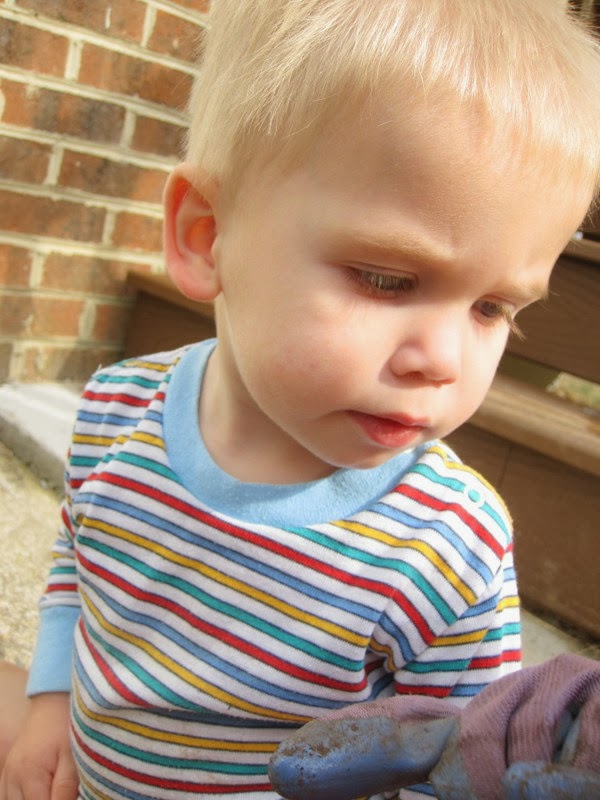 (That gloved hand belongs to Miriam—she wanted to poke one of the bugs, but not with her finger). 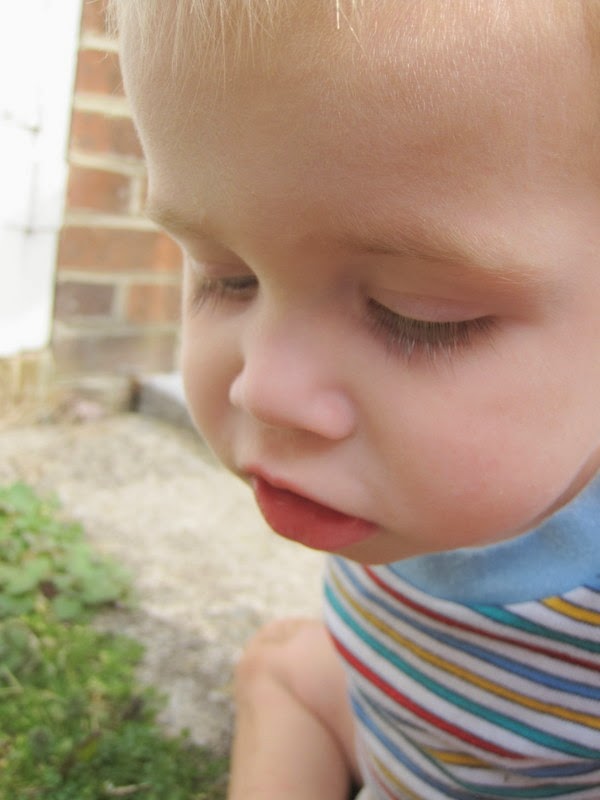 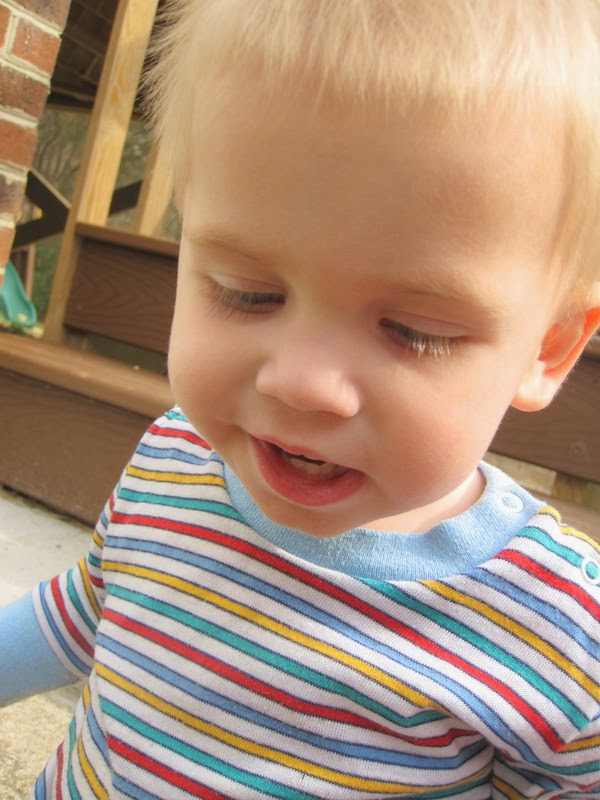 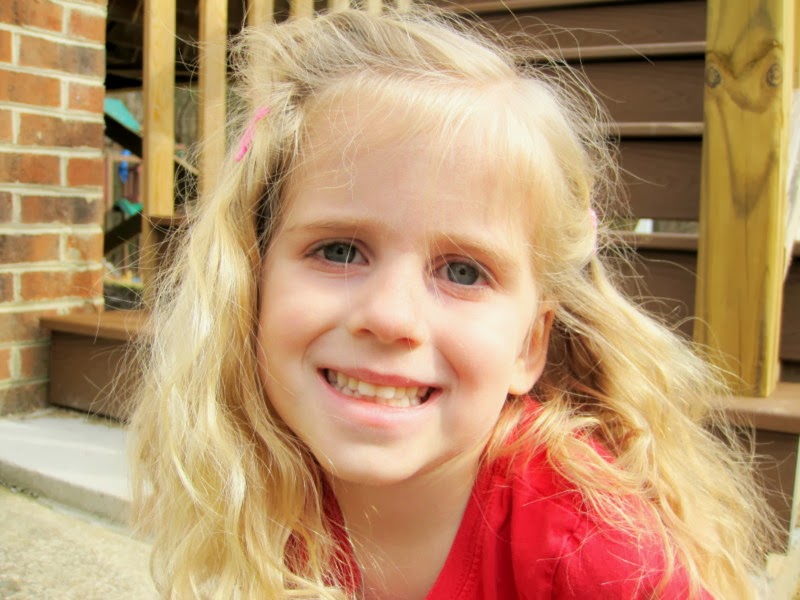 Eventually the bugs got boring and the kids noticed our spring wildflowers and picked some bouquets. 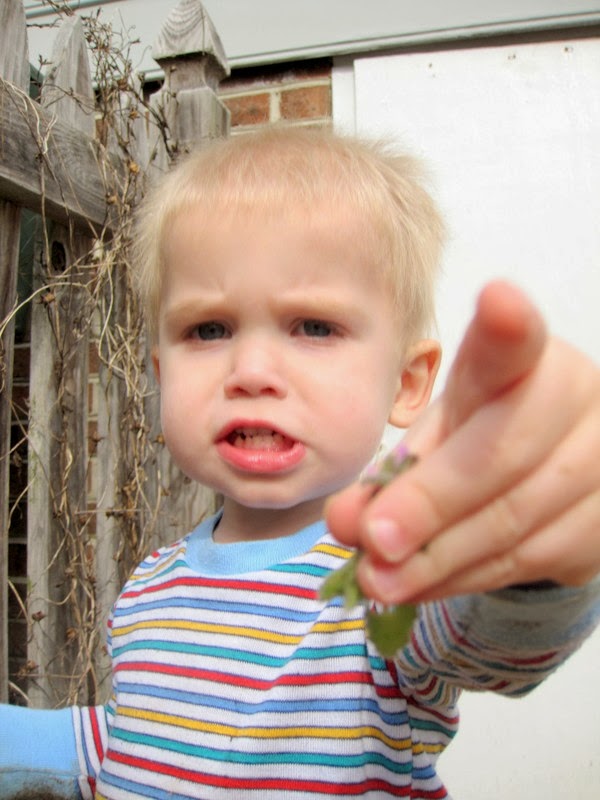 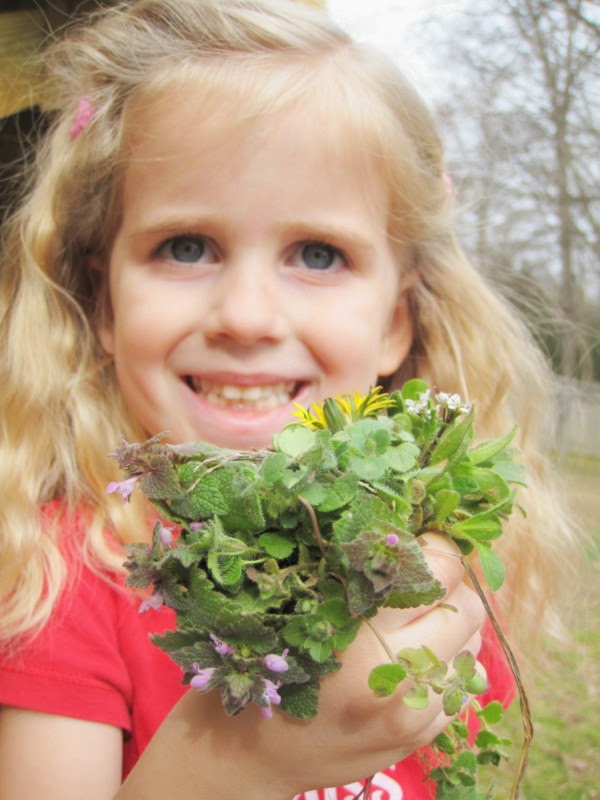 Benjamin enjoyed watching from the deck while I hung out another load of laundry. He kept yelling, "Hi! Hi! Hi!" 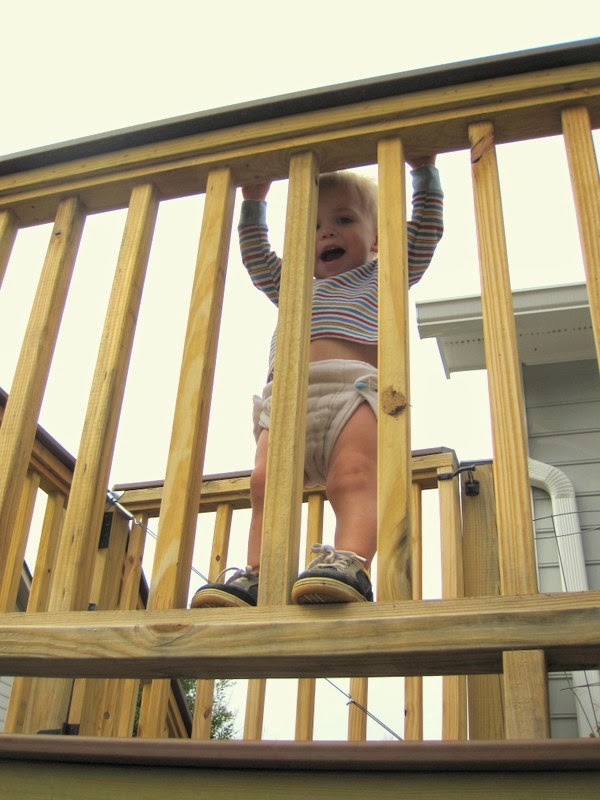 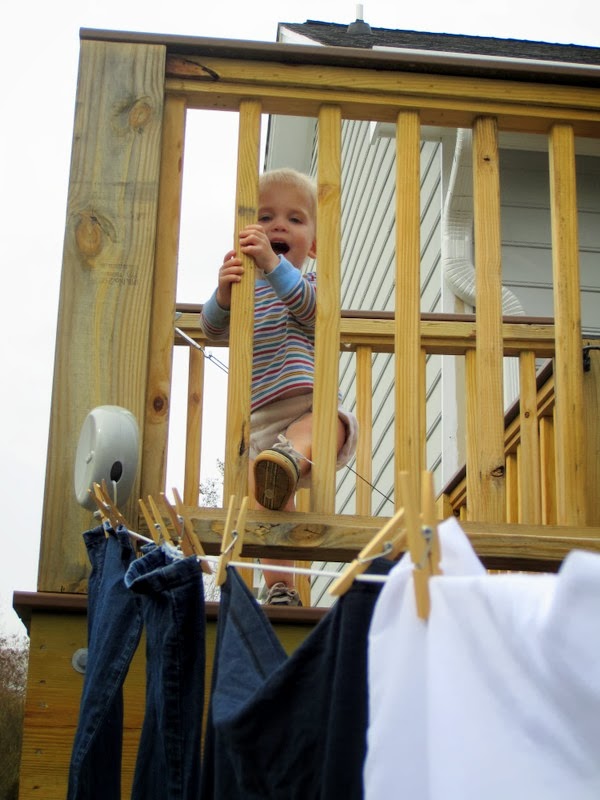 I'm not sure what his grumpy face is for in this picture. 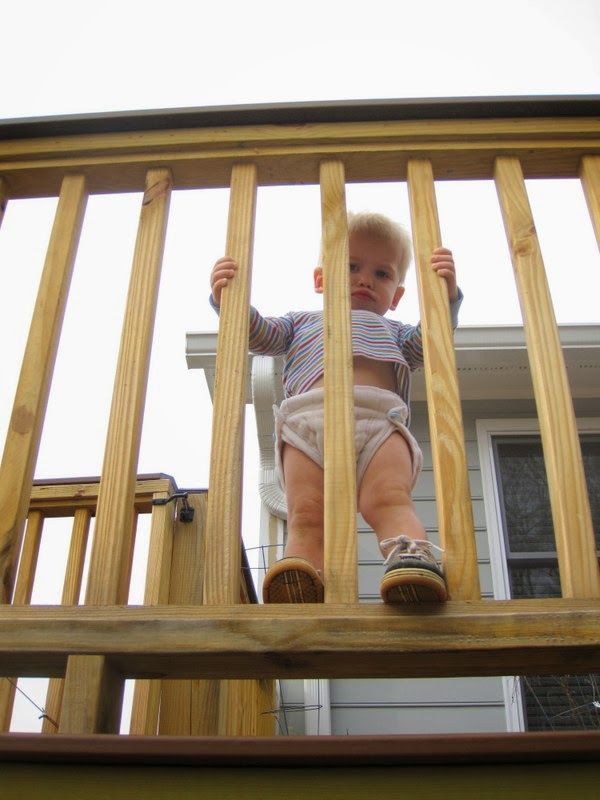 I rinsed out the bokashi bucket and asked the kids to keep out of the mud I created while doing so. Benjamin didn't listen and slipped and fell in the mud, which is why he ate lunch nearly naked. 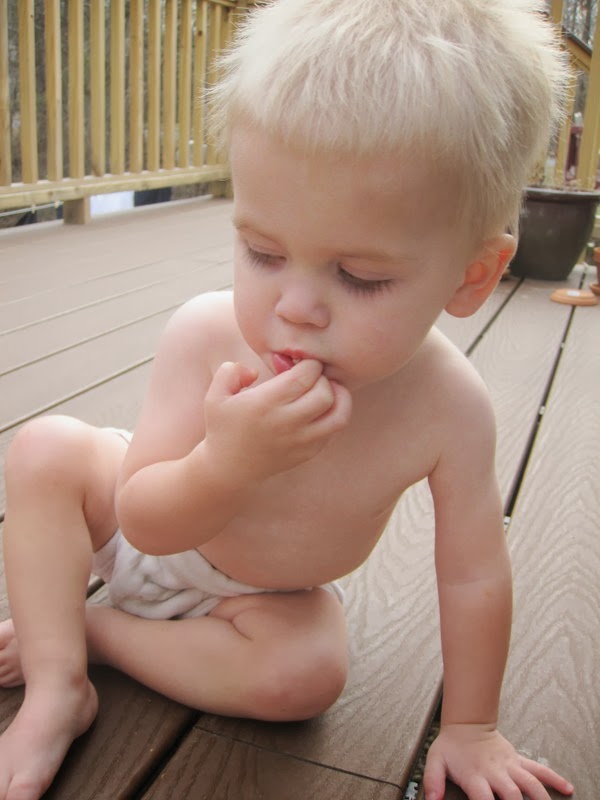 We had cheese and crackers and grapes—a tastiest lunch we've had in days! Here's Miriam pretending she's a chipmunk with grapes stuffed in her cheeks: 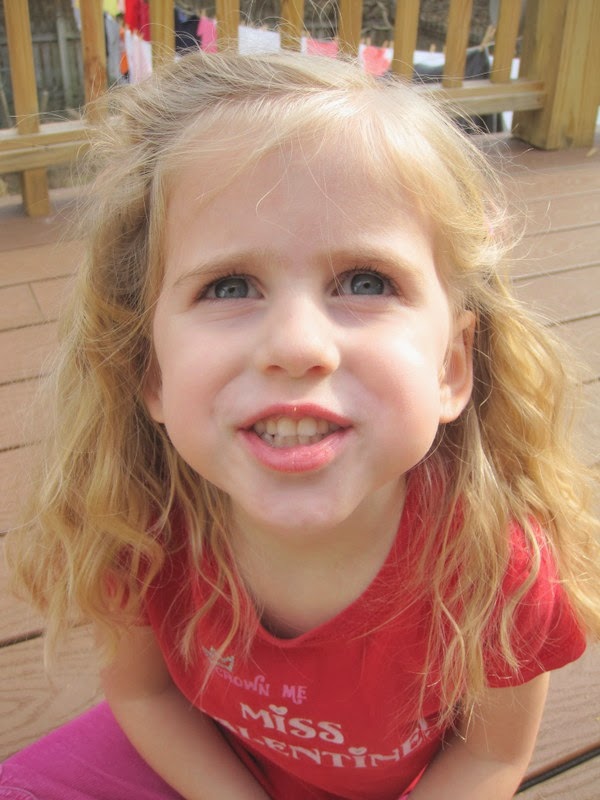 And here's Benjamin "smiling" for the camera: 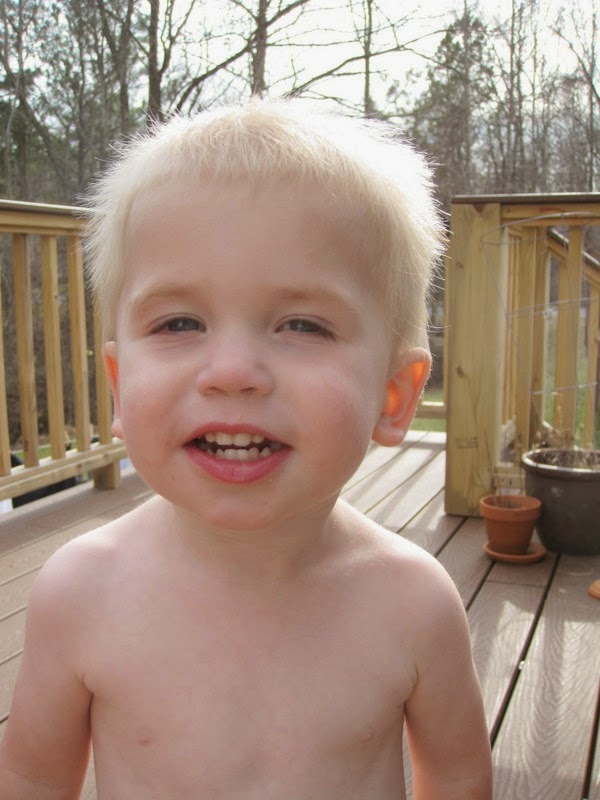 And here's a candid smile (which is much better than his posed smile): 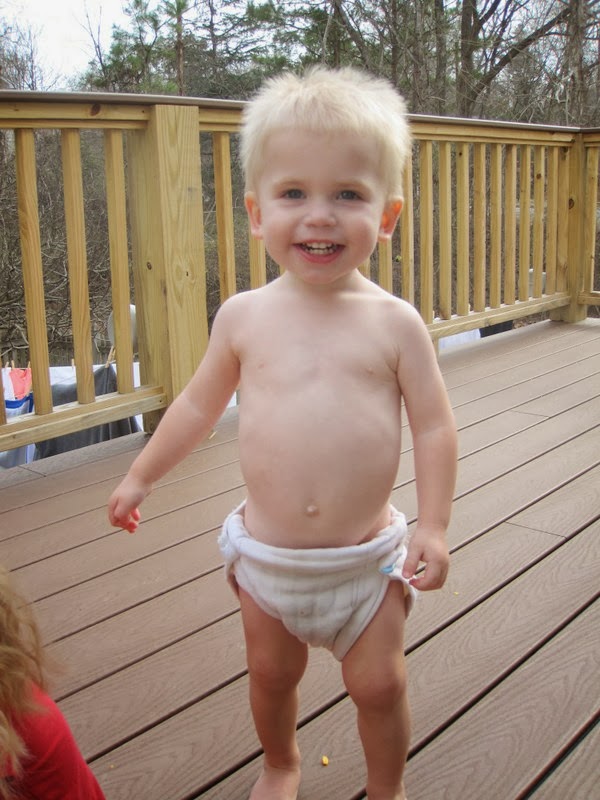 Here's Benjamin running and yelling (one of his favourite pastimes) on the deck: 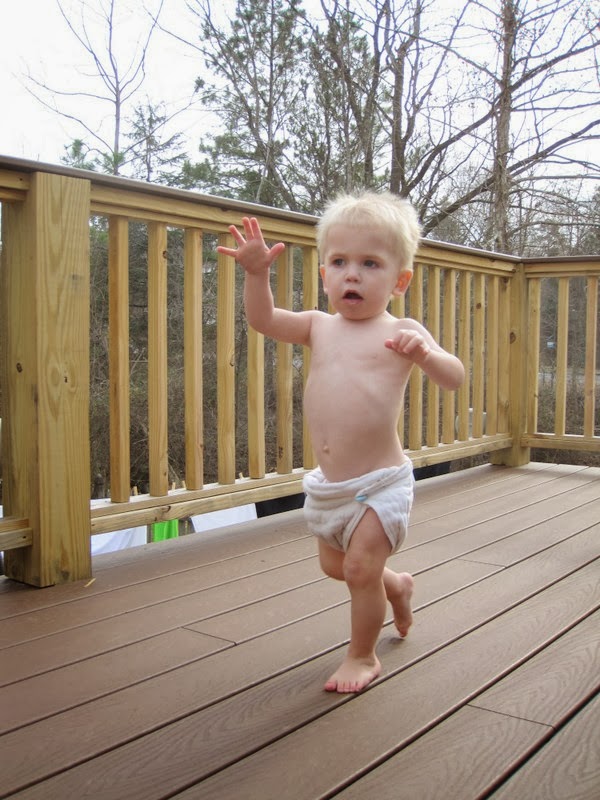 And here he is pointing to the sky and yelling, "Guy!" which is how he says sky: 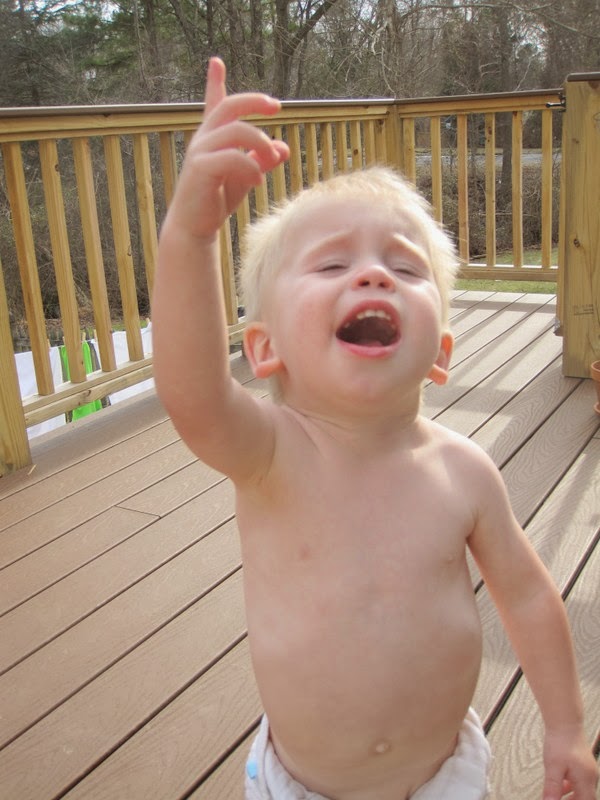 Now Benjamin's napping, Rachel's home from school and is happily going through her valentines and giving Miriam candy in exchange for doing chores. I think I'm going to usher the kids back outside now, though. It's time to bring in the laundry.
Posted by Nancy at 4:34 PM