School let out early today due to the impending snow storm. This time, however, their predictions were correct. Instead of waiting 6–8 hours for the first flake to drop after Rachel got off the bus the flurries began within a half hour. And they weren't lying about how quickly it would accumulate, either. We got about an inch an hour for five hours. It's been pelting us with ice pellets for the past couple of hours and we're supposed to have a "wintery mix" all night long and all day tomorrow.

Andrew left campus as soon as he heard his classes were cancelled—he didn't want to get stuck in the traffic! We had friends stuck for hours in their cars—some up to five, even seven hours. It's nuts!

Now, I'm not sure this is necessarily due to the weather. A lot of it has to do with the general panic that ensues whenever it storms here. Granted, this is a big storm for these parts. However, it was seriously not that bad when we were out walking. I know the north has snowplows and other goodies like that but honestly, it's not like it snows and then snow plows magically take it all away.

Orem, for example, has fifteen snow plows for 529 lane-miles of road to maintain. It takes constant vigilance for 15 snow plows to keep the roads clear—and even then driving on unplowed roads isn't exactly unheard of.

During the last snow storm I search high and low for any other such document for any southern city—just for comparison's sake—but I gave up after a few futile searches. Tonight, however, I honed my search terms and found the "Snow Removal and Ice Control Policy" booklet for Burlington, North Carolina.


Allow me to make my case:

Orem has only 18.3 square miles to deal with while Burlington is a little more sprawled out with 25.4 square miles. I wasn't able to find how many lane-miles of road Burlington has but I'm willing to bet—being somewhat familiar with how wide the roads are in Orem versus Durham—that Orem has as much if not more lane-miles of road to maintain. But since I can't compare lane-miles to snow plows we'll do a snow plow to person ratio for these two cities.

And by "we'll do" what I really mean is "I'll have Andrew crunch some numbers and make a fancy chart for me:"

It's not like the snow plows of the north are magically able to deal with the constant onslaught of snow we receive in more northernly spheres. Orem deals with 29 inches of snow per year on average while Burlington has to wrestle with four.

I'm going out on a limb here to suggest that perhaps the south isn't terribly under-equipped after all.

Granted, this was just one random city pitted against another random city—but it would be a whole lot easier to collect data if all the cities would put their snow removal plans out there for the world to see (come on, all the cities—don't be shy!).

Or, in the words of my cousin-in-law's friend (re: the mess in Atlanta):


A few points to make (just for argument's sake- it really didn't effect me that much)... keep in mind I lived in Utah so I know it snows there—sometimes A LOT. 1) Utah has snowplows. Alabama—no reason for snowplows for the rare one time a year it snows. I don't believe they even sale snow plows or snow shovels at the Wal-Mart here. 2) It didn't snow here—it iced. Little grains of ice—not the pretty white flakes Utah gets. It froze my hair and it froze the roads. Different snow. 3) People don't know how to snow drive here, for the most part, And how could they? No snow—no experience. 4) Different climates, my friend. Utah has a semiarid climate with a 13.5 inches of rain/year. Alabama is a humid subtropical climate averaging 54 inches of rain a year. Lets just imagine all of a sudden Utah gets those 54 inches of rain—maybe some mudslides or flash floods (definitely in southern Utah). I promise I wouldn't be saying: "Ah, those poor little tykes can't stand to get their feet a little wet..."

I typically try to stay out of facebook debates but I couldn't help entering this one, so I said:


But if it rained 2 inches and they cried about it, would you think that was silly? I would.

And then she went all crazy on me:


I thought the freakout about the snow was overboard too until this snowstorm hit and then I understood. I am saying, quite logically, due to the geographical climate differences the comparison between southern weather and Utah weather (or anywhere that is used to snow) is quite absurd. If you don't like the rain analogy, use a tornado one. If there were five deaths anywhere due to any natural disaster, it is tragic. We don't laugh or make comparisons for any other natural disaster and due to the limited resources because of said climate differences, two inches of snow is, actually a disaster (minor—yes) but a disaster nonetheless.

I'm sorry, but Atlanta didn't experience a natural disaster last month. They suffered from poor city planning. Just like the gridlock Durham experienced (my friend's husband just got home after leaving work seven hours ago) wasn't caused by the snow as much as the mass panic attack. We were out in the snow. It wasn't that terrible. Did it make things worse? Certainly. But roads were already sluggish by the time things got bad—because everyone was trying to get home at once.

The two inches of snow that Atlanta got earlier this year—that, sure, caused a few traffic accidents (but rain also causes traffic accidents (and lots of 'em!))—is not comparable to Hurricane Sandy.
Now, if Atlanta gets the promised ice storm we're currently bracing against ourselves here in North Carolina and if it does cull 25% of their trees then that could probably be categorized as a natural disaster. In fact, I'm all for it!

I still find comparing places interesting, much to the annoyance of my cousin-in-law's friend...and probably several other people.

I'll admit that the ice pellets are a little weird—I'm used to snow falling silently, not making a gentle tinkling noise as it lands—but I don't think they are inherently worse than snow.

Ice storms can be bad (I think we're still bracing for one here). But it's not like the south has a corner on the market when it comes to ice storms.

The north is familiar with ice storms, as is the west.

Humidity is relative. It's not always humid in the south. It's not never humid elsewhere.

Fluctuating temperatures—this is a good one. Ice is slipperier when it's near its melting point, the argument goes, so the north should be grateful that it's always cold enough to make the ice less slippery. Because there's no such thing as chinooks or the lake effect or anything like that. The temperature is always constantly frigid and there's no freeze thaw at all. Slip-free ice! Boy, the north has it good! I never slipped on anything before I moved down here. Just kidding!

A forecast of snow down here is like yelling fire in a crowded theatre.

People panic. They buy all the eggs, bread, and milk. 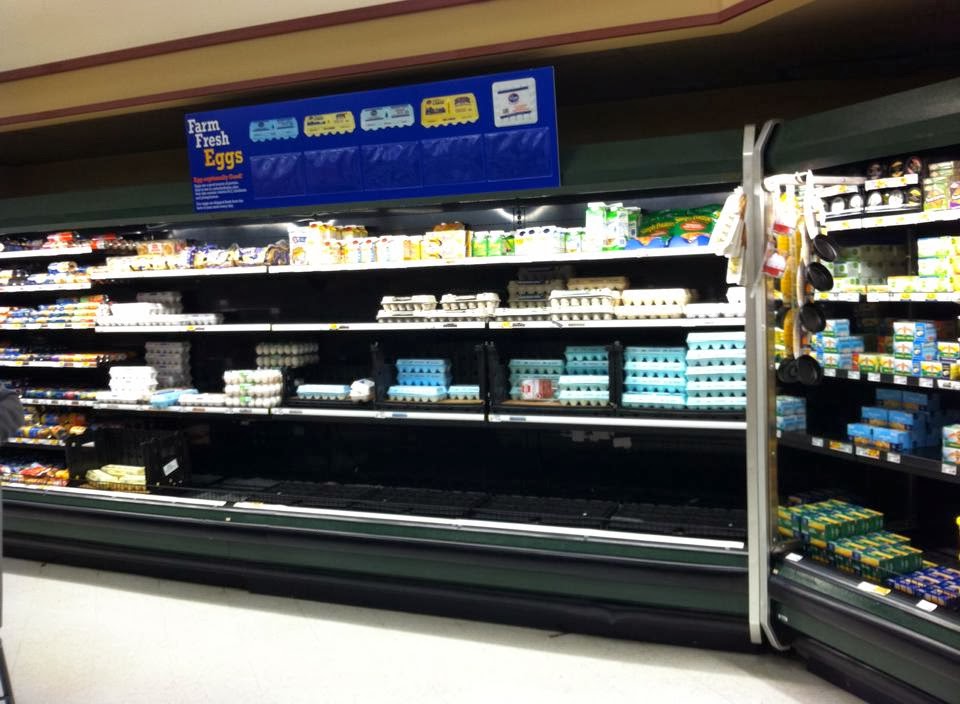 Am I happy Rachel came home from school early and wasn't stuck on a school bus overnight? Absolutely I am!

Do I think southerners overreact to winter weather and do I find memes like this funny (bordering on hilarious)? Absolutely I do. 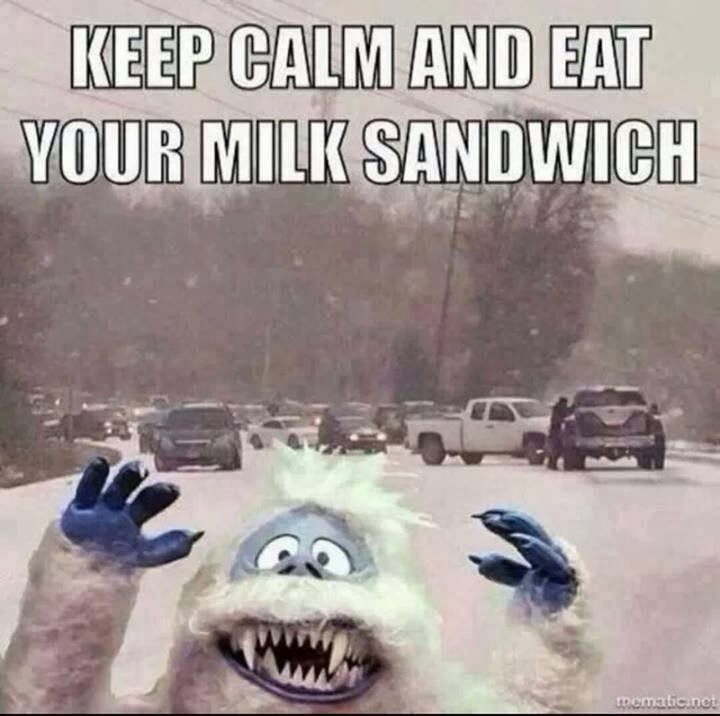 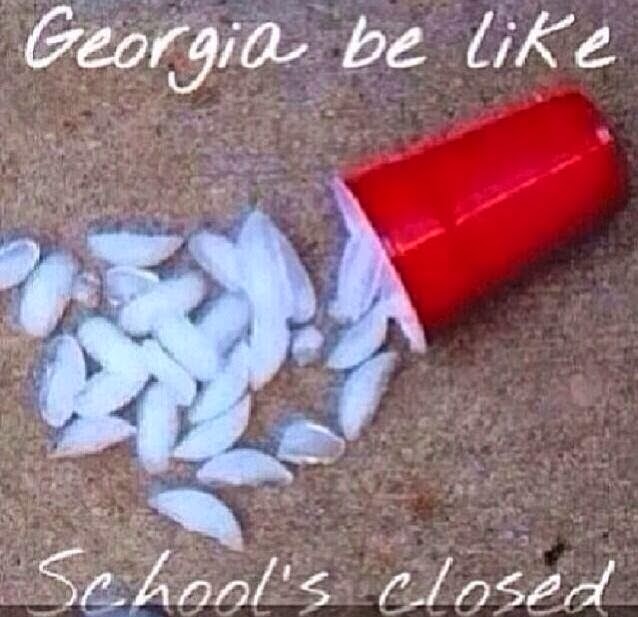 Do we plan on leaving the house tomorrow? Other than to play in the snow—no.

Do I think it's tragic that people die in weather related traffic accidents? Yes.

And I don't usually stick up for winter because I hate winter (like, with a fiery burning passion that could fuel a whole planet for a millennium) but I do just have to point out that people also die...in the rain. Driving's really dangerous. Always. (I hate driving probably even more than I hate winter).

Let's not blame Old Man Winter for that.

I just had to get that off my chest.

Please don't hate me, South. I still love you. Enjoy your snow day!

Side note: I'm kind of interested to see what this ice storm will be like if it hits us. It's the morbid curiosity in me. I can't help it. I've heard so much about ice storms (seriously so much; like, I think it's a favourite topic of conversation down here) but we didn't ever see one last year (except that one Saturday when it was really icy outside until about noon once—was that an ice storm?).

A couple more notes: In Alberta, snow plows don't even hit the roads until there are more than three centimeters of snow (that's just over an inch) or if things are icy (because ice happens even way up north (go figure)). They don't use a lot of salt because it's too cold for it to be effective, really, and because it's kind of bad for the environment.

Also, the province recently privatized snow removal services. Surely there's a market for that down here—surely some construction company could hold a few snow plows and then offer their services for when it snows. It doesn't have to be the state's responsibility—sure, they'd have to pay the contractor but they wouldn't have to maintain the snowplows, etc.

One snow removal contractor in southern Alberta runs eight snow plows to cover 528 lane-miles of provincial highways between Calgary and Nanton (so, the stretch of highway that I grew up on). It snows 66 inches per year, on average, in High River. Orem has 15 snowplows for their 529 lane-miles and their average of 29 inches of snow.

I'd be really interested to find out how many snow plows Durham has.
Posted by Nancy at 11:49 PM