In addition, my host family lived quite a ways away from the other host families. I had my own bus route. I couldn't walk to school with any other teachers. I lived clear on the other side of town! We had two LDS branches in Voronezh and I was in one while the other seven girls were in the other (so I attended both branches).

To top it all off, somehow my mom had my email address wrong so for the first couple of weeks I was out there I got no email from home.

I felt so isolated, so lonely, so out of place.

Eventually my mom realized she'd been typing my email address wrong, I figured out how to get around town and communicate with my host family, and I got to know the other teachers well enough to feel comfortable around them, too.

Here we all are on the first day of school—with two extra teachers in tow who were transferred to Moscow, I believe:

I worked in the kindergarten with Emily and Staci. We had a good group of kids. That's my host-brother, Alosha (second boy on the left in the back row). You can now admire the interesting walls I mentioned in my previous post about the kindergarten (oh, and photographic evidence suggests we did not have electricity in this part of the school). 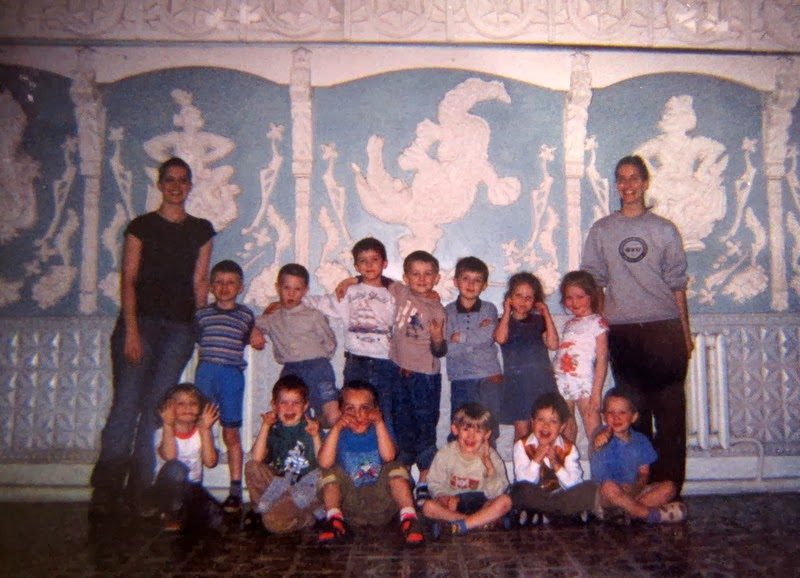 It was hard for me to feel part of the team for the first little while. Like I mentioned, Staci and Emily already knew each other. They knew how to work together. I was busy trying to work my way into that dynamic. And it was awkward.

If I'm being perfectly honest, I have to admit that one of the best things that happened to me (though it was understandably challenging for her) was Staci coming down with pneumonia. She was stuck at home for several weeks—with her host mother administering shots in her buttocks—so Emily and I were stuck teaching together without Staci.

It wasn't particularly difficult to do; we just divided the children differently and adjusted the schedule a little bit. We only had the children for a certain number of hours per day so it wasn't as if we were adding hours—we were just increasing the intensity of our workload.

When we were finished teaching for the day Emily and I only had each other for company because everyone else taught in the afternoon. We got to be really good friends.

I learned that she and Staci hadn't been trying to give me the cold shoulder at all. They were just going through culture shock themselves and were clinging to the most familiar thing—each other. They hadn't noticed that I was sitting on the sidelines, hoping for a friend. The friendship I found in Emily has been of the fantastic decades-long variety.

Emily came over for dinner tonight with her two little kids. Both our husbands were working late (mine was at school, hers had an evening shift at the hospital) and we figured it would be a good night to get together (safety in numbers when parenting (right, Crystal?)—kids are just waiting for you to let down your guard, I swear). 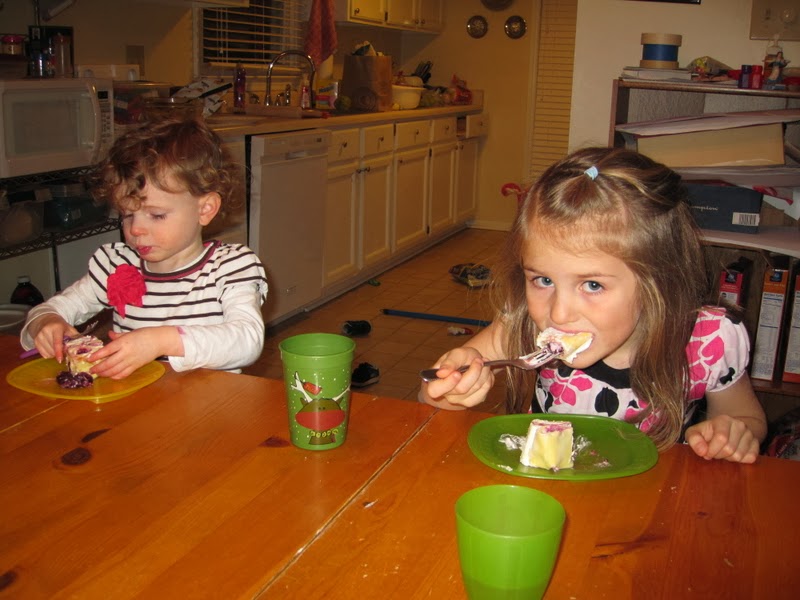 Emily's son ate one perogi and it took some convincing to get him to do even that (though he devoured his cake). 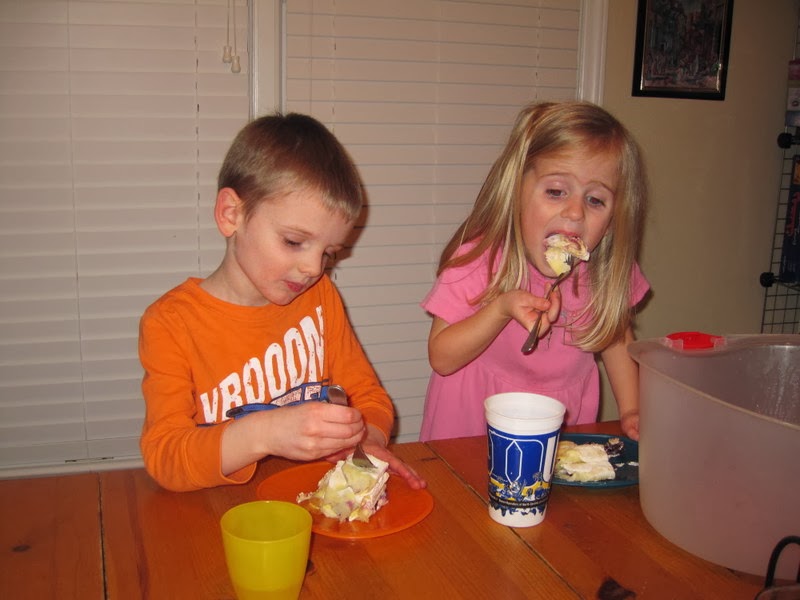 My kids might not sleep well, but they eat well (as evidenced by these pictures of them—oink, oink!). I suppose we all have our battles to fight as parents.

The kids had a blast playing hide-and-seek and building with Lego and creating a general hubbub while Emily and I chatted and stuffed the perogi and cleaned up and did all that other "mom stuff."

We laughed about the time we all vowed to have a ten-year reunion—because surely we'd all be well-established by then and could afford to just jet off to some agreed-upon location to relive our Russia days. We didn't take into account graduate school, medical school, life in general, or the fact that between the eight of us there'd be fourteen children we'd have to farm out in order to get away. We were so naive!

At least Emily and I were able to get together for a ten-year reunion. It's always fun to get together with her, to feel like nothing—but everything—has changed. Our friendship always just seems to pick up where it left off without a hiccup, which is a real treasure, I think. I'm so glad we live close to each other again!

"I can't believe it's been ten years! It feels like yesterday!" I remarked over dinner.

"I know! And yet it feels like another lifetime," Emily said.

I think that's just another sign we're getting old.

Want another sign Russia was another lifetime ago? None of us had a digital camera. It was all film for us and my camera was a hunk of junk. Tiffany had to operate on it, in the dark of windowless bathroom in the school kindergarten, just to get it to work a couple of times (Tiffany is talented with cameras).

Anyway, here's a little retro picture dump for you...

Oh, by the way, we also taught high school together. Now that was an adventure. 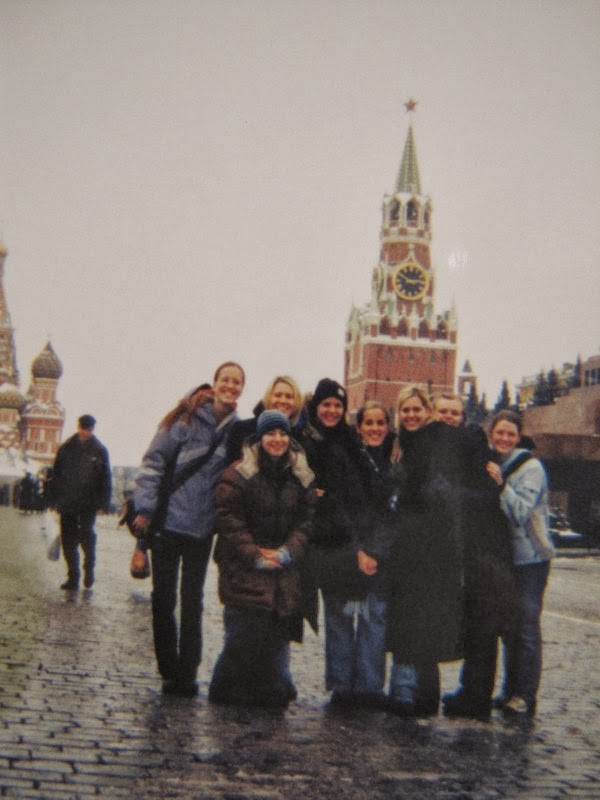 There are many more pictures to dig through. One day it would be fun to go through and pair them up with my journal entries (because Russia happened back when I still wrote with a pen in a paper-filled journal and had to wait to develop my film and other archaic things like that—no wikipedia to help me remember the history of the places I'd been or anything—it was the dark ages, really).

The world has come a long way since 2004 and so have I. I'm so grateful for the friends I've gained along the way, the places I've lived that influenced who I've become, the trials and the blessings, the mistakes I've made and the painstaking fixes they've required.

I'm also I wrote a few letters to tell my adventures to a certain young man, who was so busy being a missionary in Italy that he never wrote back to me. But that's another story...
Posted by Nancy at 12:30 AM