This afternoon Andrew posted a link to some geeky valentines so I followed the link and then sent him the "I love you more than free wifi" one with a special note telling him that I was happy to be "snowed in" with him again today and playfully joked that our relationship would probably survive even if we had to live without internet for the day.

A few short hours later we heard a tremendous BOOM. Our friendly neighbourhood transformer had blown. The power was out, essentially forcing us to live without internet for the afternoon.

We survived. But just barely.

It was actually a lovely day—high fifties; clear, blue skies; brilliant sunshine—we headed outside to splash in the puddles since that's basically all that's left of "the worst snowstorm to hit the area since 2002." Just to remind you, that storm was raging through Wednesday and Thursday. It is now Friday. 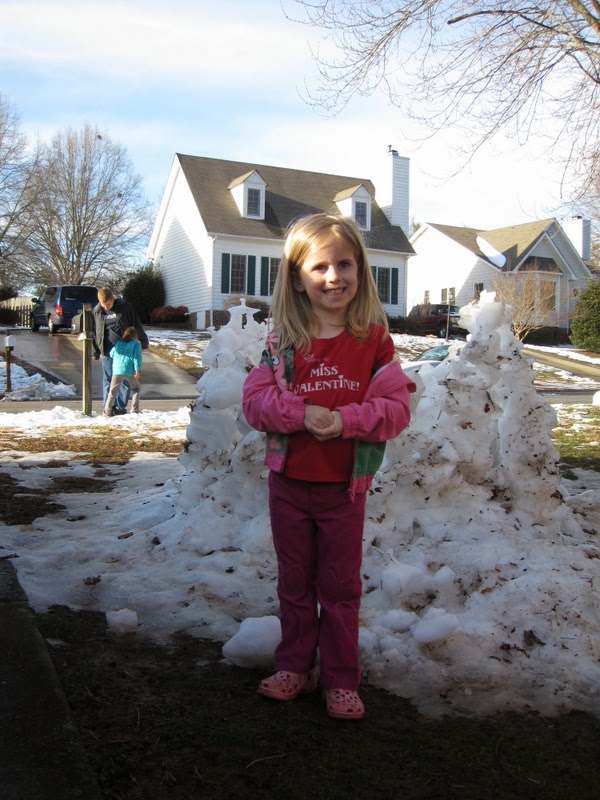 Benjamin fell down in the snow fort and had to touch the snow with his bare hands. Oh, the inhumanity! 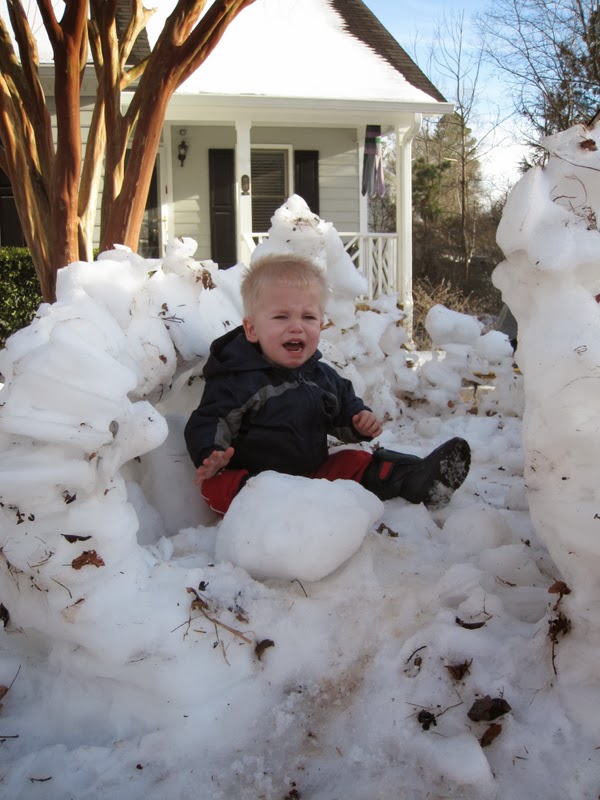 Touching the snow on the road was fine. 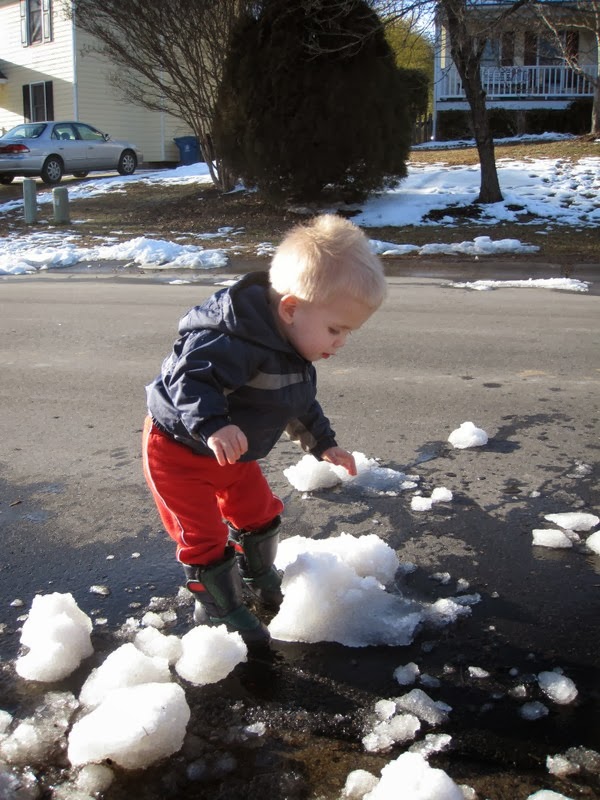 We had a snow plow clear our roads yesterday afternoon and it left big piles of snow in the gutter (that's normal, folks) so we had fun breaking it into chunks, building dams, and having a good time in general. 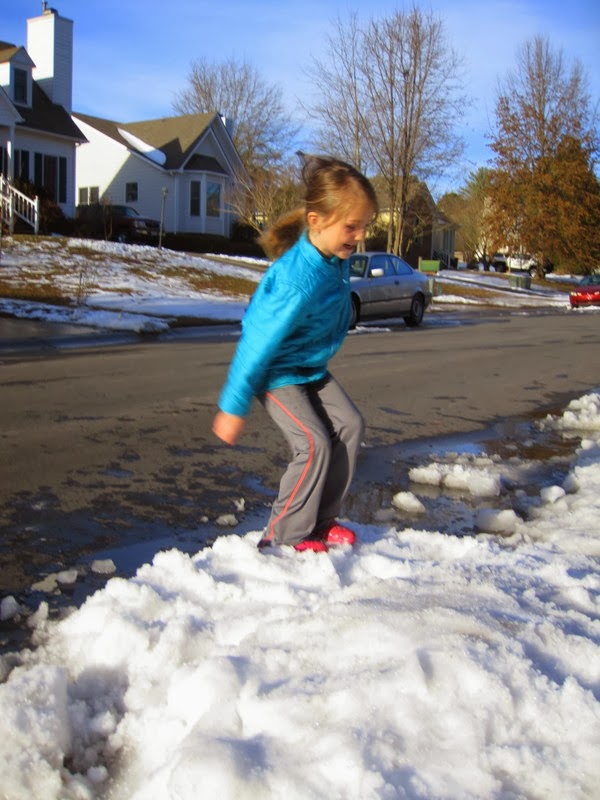 I couldn't take my eyes off Benjamin. Not only because we were, ya know, playing in the street or because the storm drains here could eat babies for breakfast...

...but because he is so beautiful and curious and intent and I just love him and if that storm drain doesn't gobble him up I'm pretty sure I will! 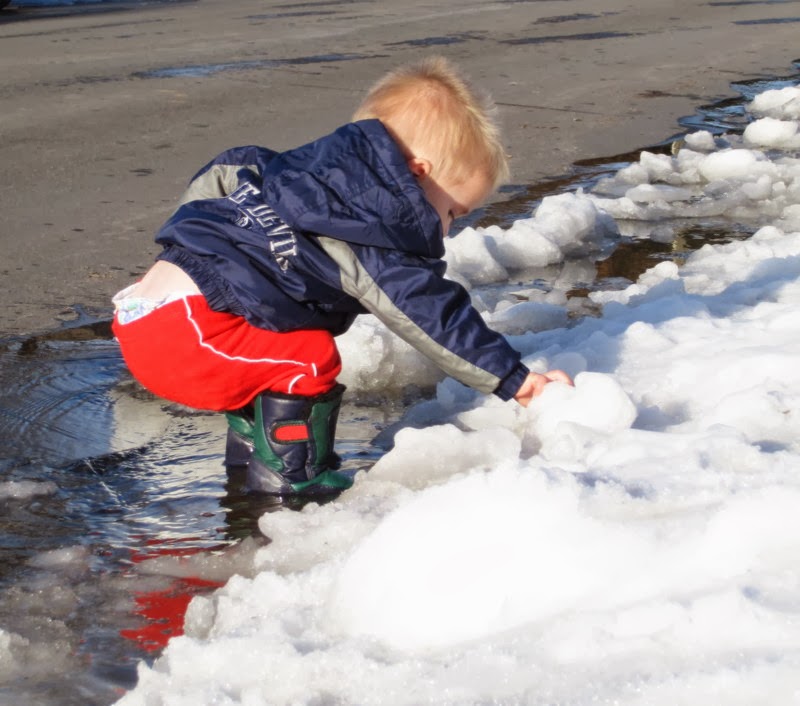 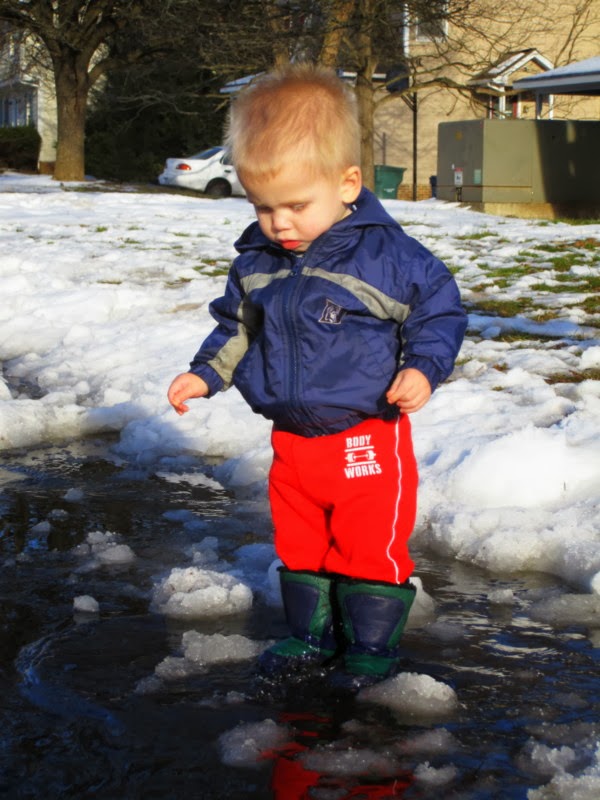 Here are some of the bigger loves of my life playing with the spring runoff: 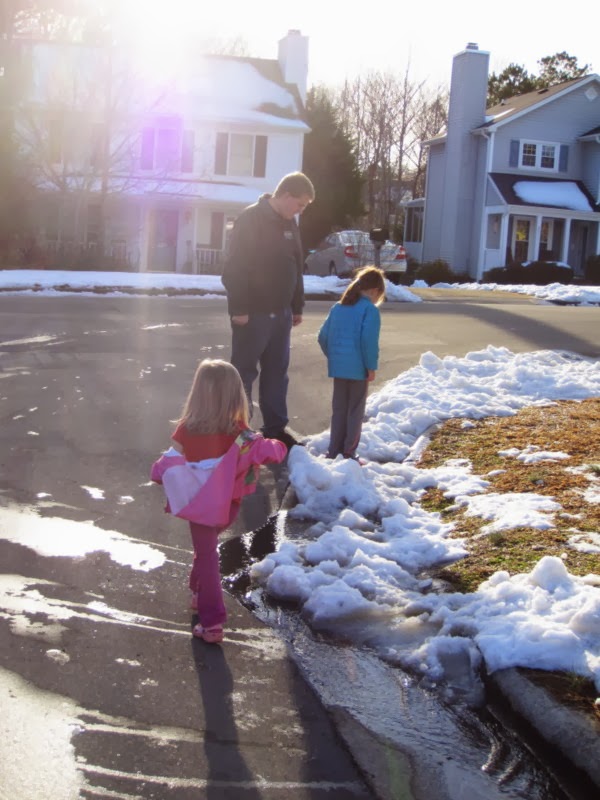 We were also joined by a sweet little neighbour boy (who is currently kicking cancer's butt). 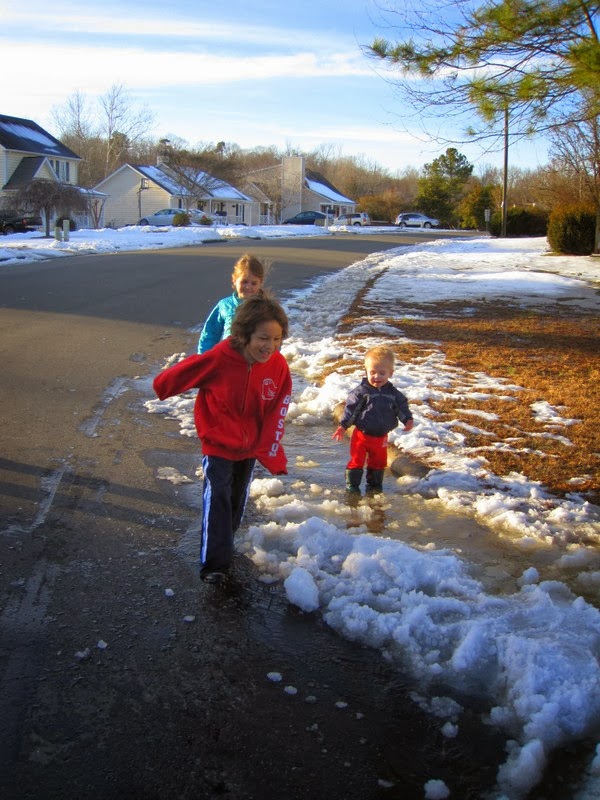 Together we made a rather fantastic dam. 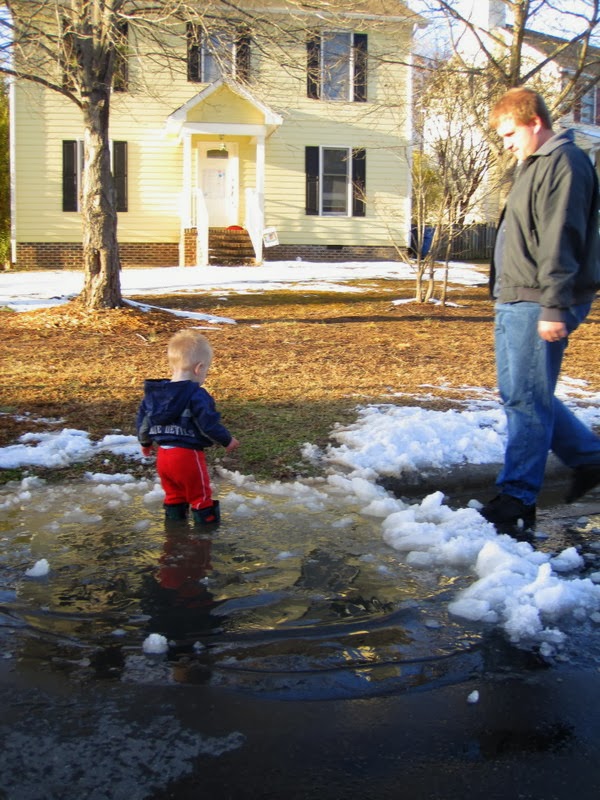 Benjamin was fascinated by it, and even though his boots had long since filled up with ice water he waded on into that puddle to splash. 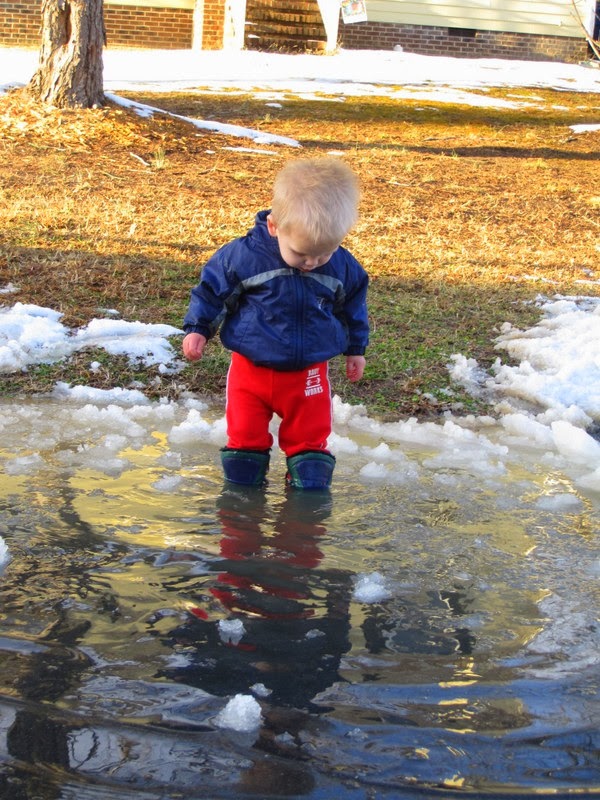 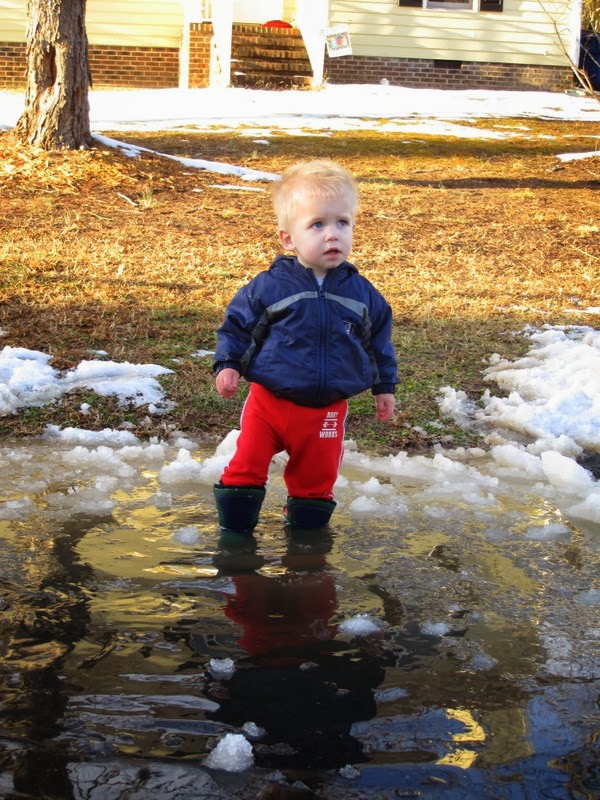 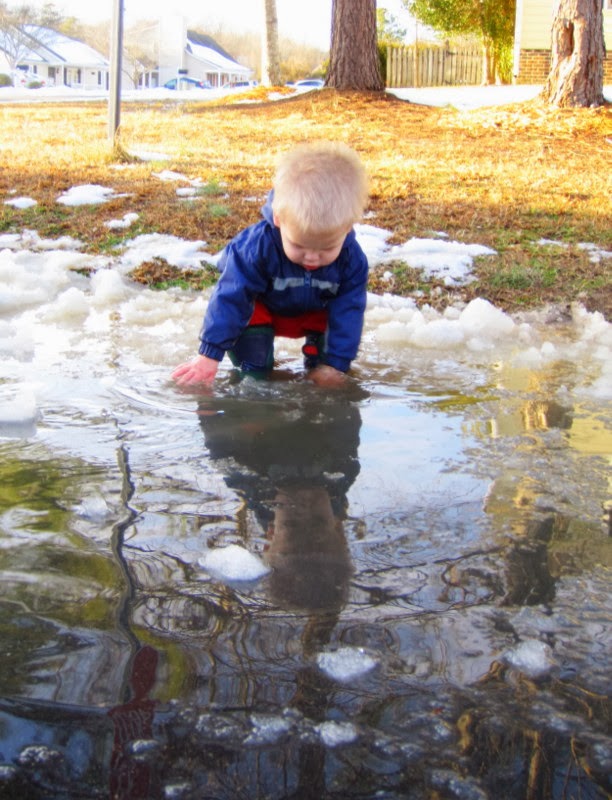 It was all fun and games until he lost his balance suddenly found himself sitting in waist-deep ice water. It's a credit to my good mothering skills that I don't have a picture of that, right? I know I take a lot of unfortunate pictures of my children (Like above: Oh, you fell down in the snow fort and want me to help you up? Let me take your picture!) but this was one instance when it was more important to fish the child out of the perilous situation in which he'd placed himself than catching the kodak moment of his distress. You'll just have to imagine the tragic contortions his face went through before he was lifted out of the puddle (I made Andrew do it because his shoes were already wet; mine were dry).

I went inside to change his clothes and Miriam, who'd retired inside after her feet got drenched (which didn't take long because she wisely wore crocs (and later put on her snow boots but snow boots weren't made for puddle jumping)), proudly announced that she'd fixed the electricity!

"I just turned on the light and it worked! So it's fixed now! I did it!" she said.

You and the power company, my dear. But, yes, you—specifically you. Good work!

After Benjamin and I returned outside we decided to break the dam. The kids enjoyed watching the water rush down the storm drain carrying chunks of ice with it. 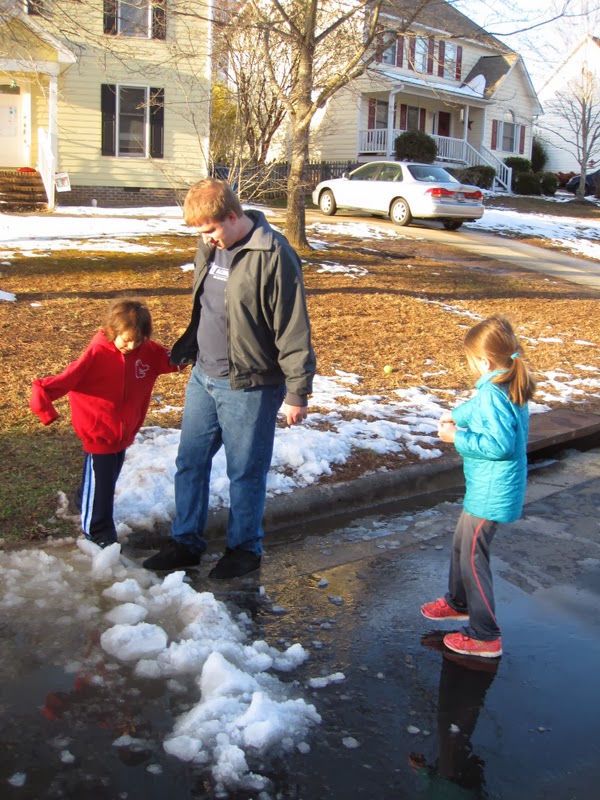 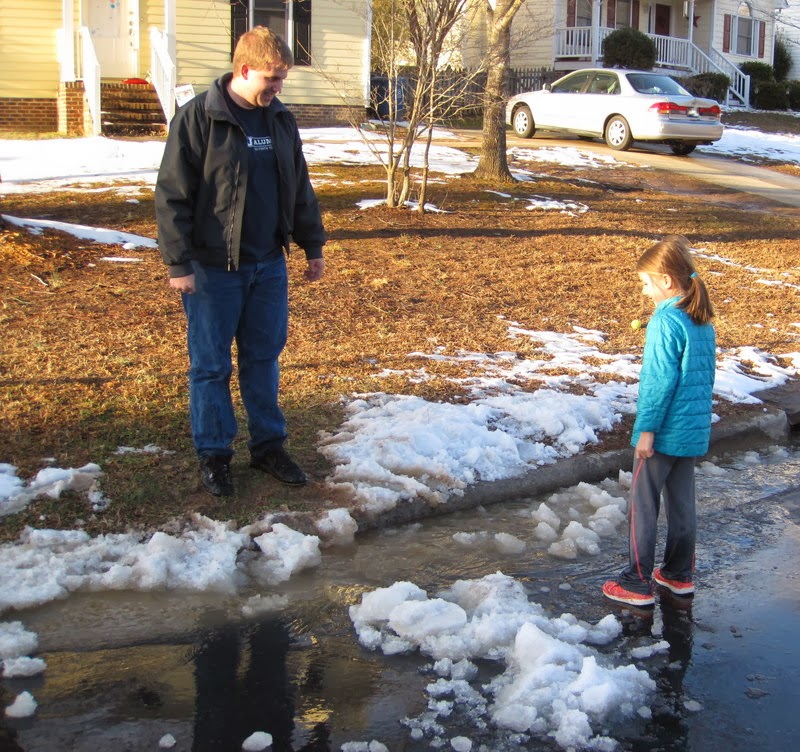 And here's Rachel (and her muddy behind) knocking down some of the igloo walls. 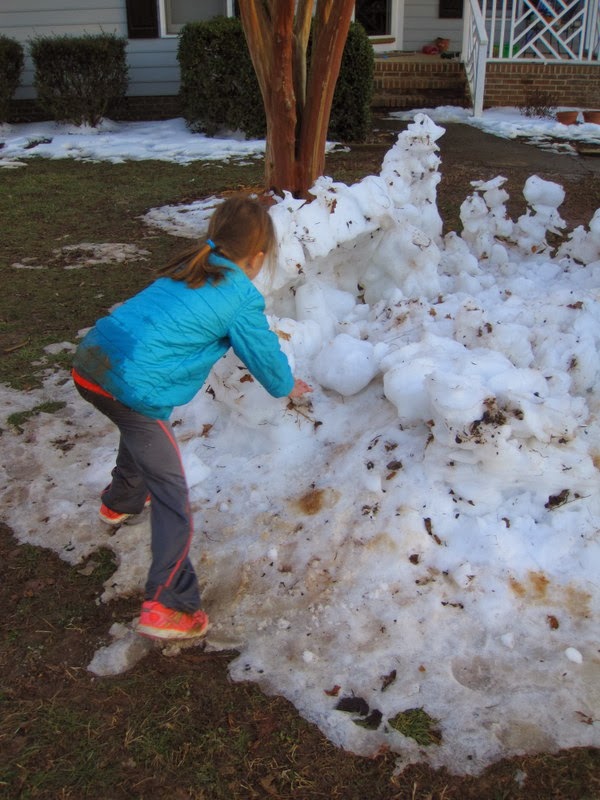 And hopefully this is our last snow day until next year. Oddly enough, today was originally not a school day but then we were planning on using it as a make-up day for the snow day we had earlier but then we ended up having to call another school day (because as you can see we were completely snowed in today). It took Andrew and I a minute to wrap our brains around that.

I think it means that we have to make up one less day than the traditional calendar schools because today was a regular school day for them (not a day off or a make-up day). We just missed our make-up day so it's like we just didn't have a make-up day, not that we missed another day of school.

*The title of this post is brought to you by my friend Jennifer
Posted by Nancy at 11:01 PM