We had our first (of many to come) Harry Potter nights (it's fall intercession so Rachel's on a three-week break) so one wanted to get up this morning. But we did it. We left the house 13 minutes late (which was technically only three minutes to late because we told ourselves to plan to leave early or we'd be late) and arrived at the church five minutes early.

I have a hunch not everyone who was supposed to showed up because cleaning the church seemed to take forever. It was us, the "manager" (for lack of a better word), and one other family. The kids had a blast though. They cleaned all the windows, inside and out, they tidied the chapel, and Rachel helped Andrew clean the bathrooms while Benjamin and Miriam helped me with the kitchen.

Poor planning = no packed lunch, no time to drive home = eating out. We didn't realize how full our schedule was for the day until it was too late to fix it. The kids didn't complain at all because we only do fast food burgers when we go to the beach (we've gone to the beach twice this year). Benjamin's a big enough eater now that we have to actually order him something now. He had chicken nuggets. Rachel's a big enough eater now that she's given up on kid's meals. She had a junior bacon cheeseburger. Miriam said, "Well, I'm getting a kid's meal. I'm a kid. And I'm not ever giving that up."

Around 11:30 we started getting panicked messages from parents, saying that the photographer was packing up to head home and that we'd have to go to a different location for pictures. But we convinced the photographer to stick around...for us, at least. The girls mostly ran around like crazy while they waited for the group picture (they did individual pictures first). 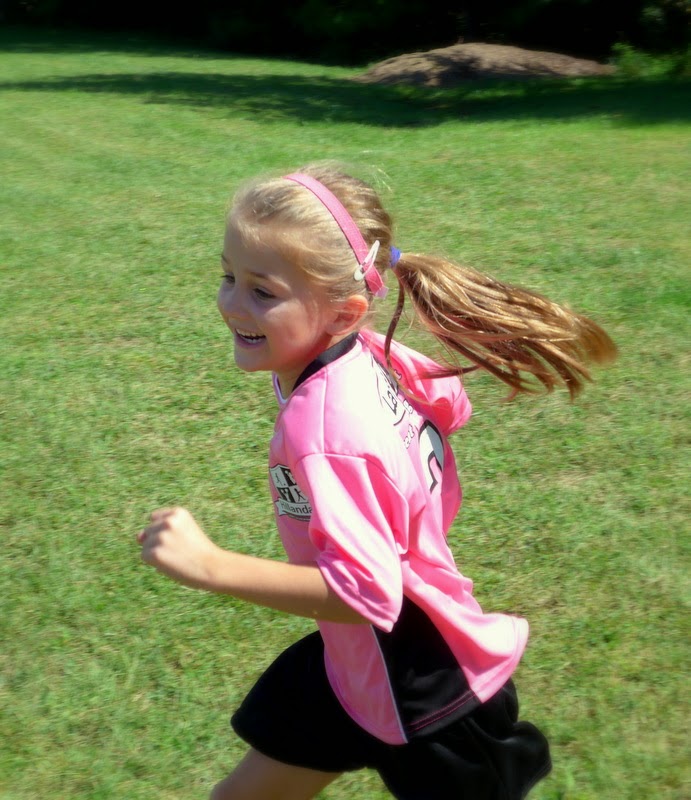 I love this picture of the team—with Rachel gazing up at her amazing coach. 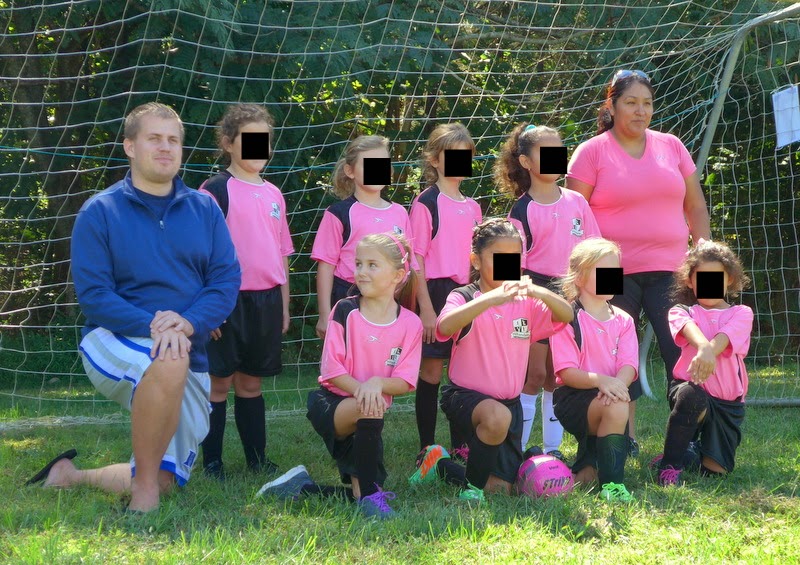 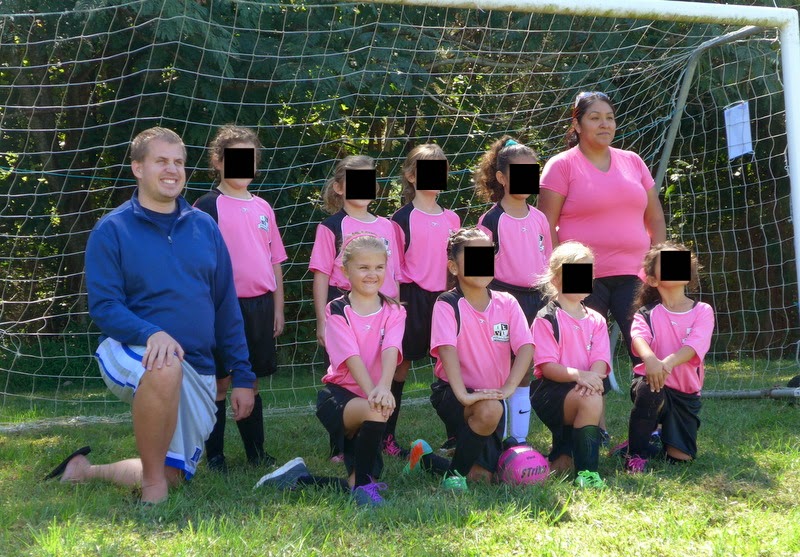 I guess a major part of picture day is to prove to our sponsor that we're actually using their money for soccer (maybe?). They require us to send in pictures of the backs of the teams, showing off their logo. 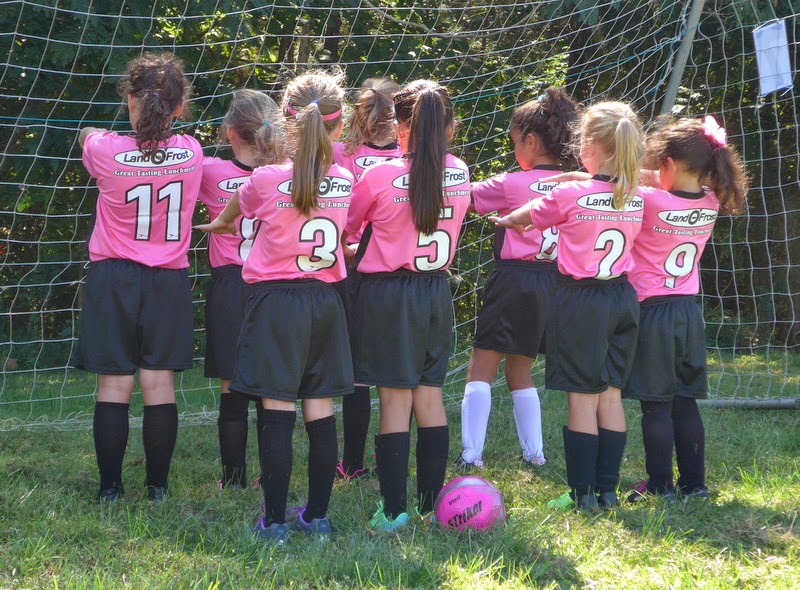 Andrew made the mistake of picking up Benjamin and tossing him into the air. "Again, again, again!" Benjamin squealed until Andrew was fairly certain his arms were going to fall off. 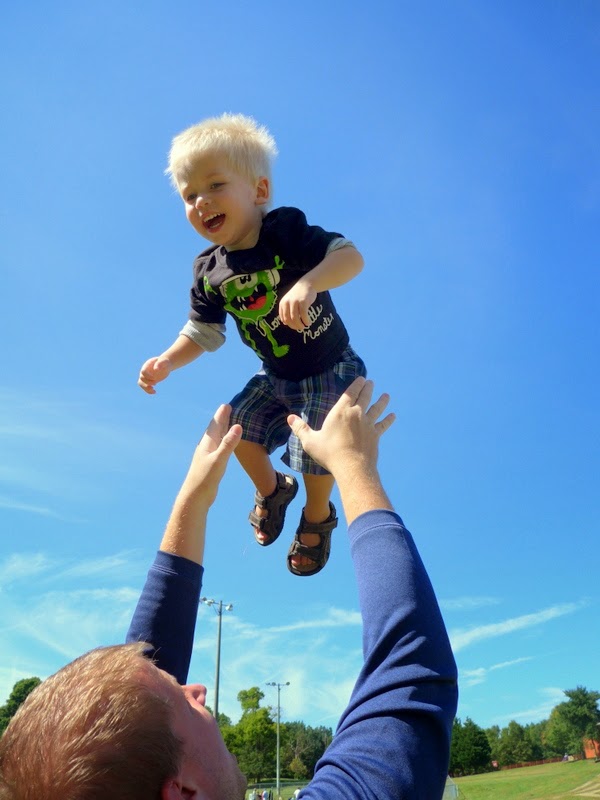 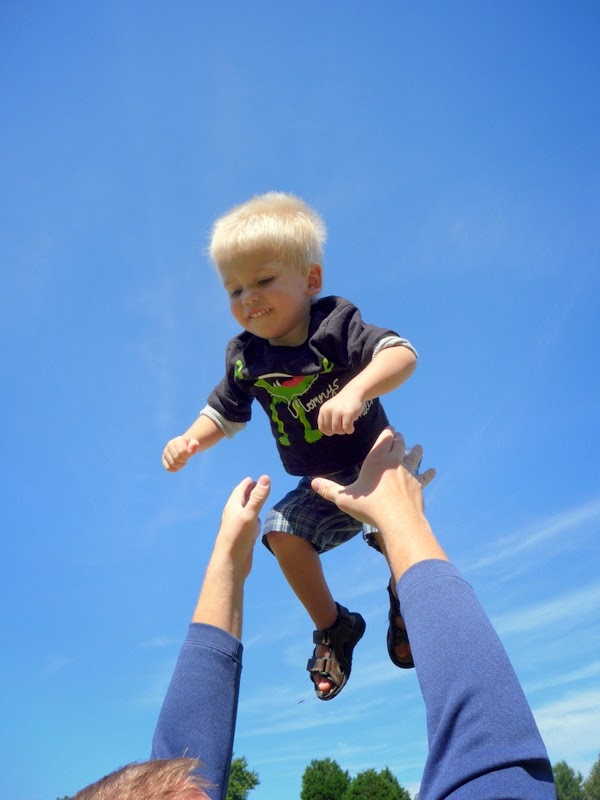 We had to drive to a different location for our game today. Our entire team left the picture field at the same time and arrived at the playing field fifteen minutes later. It was like we purposefully caravanned to the game.

Competition was fierce and the girls played hard. Rachel is getting so good—she only had to be reminded once which way to go "Wrong way, Rachel!" and is getting really good at stealing the ball from her opponents. Our team lost (the score was 3–2 but we don't really keeps score, so...) but they were proud of how well they played.

Here's Rachel helping get the ball down the field: 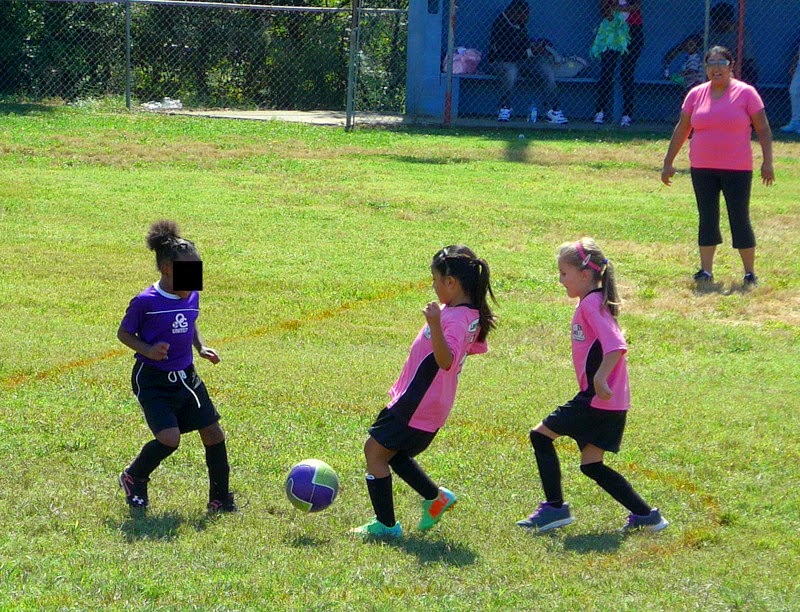 And here's another shot of the game (she's the one with the ball): 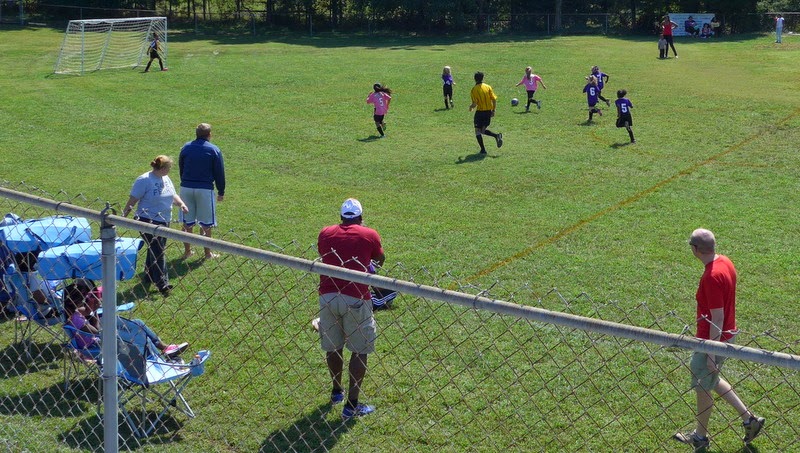 2:10 PM Arrive home and put Benjamin down for a nap

The girls and I stripped out of our church-cleaning/soccer-gaming clothes and threw on our Sunday best. Andrew put Benjamin down for a nap. Then the girls and I left for the church, leaving the boys at home.

Rachel's friend T. was baptized today and he wanted her to be there so badly he asked me to say the closing prayer just to ensure her attendance (I suppose he could have asked her to say the prayer). It was a wonderful hour of singing, feeling the spirit, and socializing. I especially enjoyed the bishop's remarks about how taking the sacrament each week washes away our sins as effectively as baptism originally did—you only get baptized once but you get to take the sacrament every week. It was a wonderful reminder.

My other favourite part was not having Benjamin there. I love that boy to bits and pieces but not having to wrangle him through the reverent parts was a priceless reverie. His sisters just did what they were supposed to do—sit quietly, sing the songs, listen to the speakers, get ready for prayer. It was so nice.

After the service we had cookies and cream puffs (those cream puffs from Costco might very well be my favourite thing in the world) and the children sat on the floor and spilled multiple cups of water and got crumbs everywhere, which was kind of hard to stomach after having spent so long cleaning the church this morning (but, of course, there were many hands to help clean up after the reception).

The first thing I did was wake Andrew up and ask him how long he'd been asleep.

"Holy cow," he said, looking at the clock. "Is Benjamin still asleep?"

"Yes. How long has he been asleep?"

"He fell asleep before you left."

"Yeah," Andrew said, getting up from the bed. "Are you going to take a nap?"

Not that I need his permission, but I just didn't want to burden him with solo parenting. It had been a long day for him, too. But he's awesome and told me to go ahead.

"Holy cow," I said, looking at the clock.

I woke up thinking he was amazing for keeping the house quiet, the kids, happy, and getting dinner ready while I was sleeping. And he was. But also he sent the girls outside to play with the neighbours and cooked frozen corn dogs for dinner. So it's not like the kids were perfectly angelic and he was a master chef while I was sleeping. Apparently things got a little chaotic before the girls went outside but I (thankfully) missed all of that. And I got to take a nap and didn't have to make dinner, so...Andrew's amazing.

6:15 PM I debate whether or not to leave the house again

Tonight's the General Women's Meeting and we had a social at the church before the broadcast. Ultimately I decided to stay home. I didn't think I could bear one more outing. And also I didn't want to drive in the dark.

This decision made Rachel cry because, since she's not old enough for the broadcast yet, she was hoping to have another Harry Potter movie night with Andrew while I was gone. I invited Rachel to watch the broadcast with me even though she's not old enough (girls eight and up are invited but I really don't think seven year olds who wish to watch the broadcast at home will be condemned) but she declined. Eventually Andrew told her she could watch the next movie on an iDevice, with headphones in, so she would stop wailing about how I was ruining her entire vacation.

Andrew took on the task of bathing Benjamin and Miriam. I can't even remember how long it's been since he's done that but I was more than happy to let him. While he did that I started a load of laundry because Benjamin's had a rough couple of days and I wasn't sure we'd have any clean underwear for tomorrow. When everyone was clean and pyjama-fied we settled the kids the couch for stories, then had scriptures and prayer and whipped them all soundly and sent them to bed.

The broadcast was wonderful, even if I had to watch it with Benjamin squirming beside me. I especially enjoyed Sister Steven's talk about making and keeping covenants. I suppose attending T.'s baptism this afternoon already had my baptism memories fresh in mind so when she appealed to us to remember that day it was fairly easy. I also absolutely loved the story she shared about her parents.

The videos shown—of the Korean children's choir and of women from all over the world bearing testimony of temple work in their native languages—were wonderful. I was a little torn over whether or not I liked the "I Know That My Redeemer Lives/I Know That My Savior Loves Me!" medley (it was those two songs, right?). I'm pretty sure I liked it.

Today was so crazy that I think it just might make tomorrow feel like an actual day of rest.
Posted by Nancy at 11:48 PM