All summer long we've been talking about how wonderful things will be after Andrew finishes his comprehensive exam. It was this little black rain cloud following him around. He could hardly enjoy doing anything but work on it because at the back of his mind he knew he should be working on it. And it's kind of a big deal—if you pass you get to stay with the program, if you fail you get kicked out, so...

Anytime I'd mention doing anything (swimming with the kids, plans for fall break, watching a movie) Andrew would say, "Once I'm finished with this exam we can..." relax, have fun, plan that trip, not be so stressed out, play games on Saturday night, and so forth.

Last night before going to bed Andrew asked me (jokingly) if this tie matched this shirt: 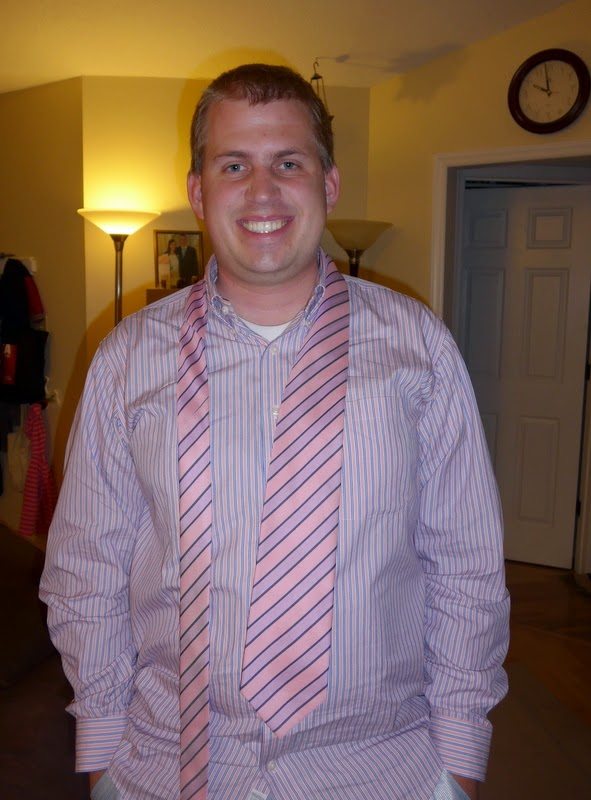 Technically, maybe it does. If you're Harrison Wright from Scandal it definitely does. But excluding Harrison (and these Moroccan hipsters) I think that this tie and this shirt just wouldn't work. So I laughed at Andrew and shook my head no.


He's only smiling so widely in this picture because I took it today after he knew he had passed. Had I actually taken a picture last night he would not have looked so relaxed. So, he passed. Yippee!

His only major fault was that he failed to quote one of his advisors who is kind of a big deal in his field—like, he'll probably win a nobel prize in the near future, that kind of big deal. Andrew had a whole section discussing his works in his "sandbox" but neglected to put it in the final paper and didn't realize it until he was reading through his paper again last night. He moaned and was probably came close to banging his head on his desk because of it.

The very best part, in my opinion, is that Andrew cited himself (twice!) but neglected to cite his committee member even once.

And his committee certainly noticed. The docked points because if it and teased him about it throughout his defense. "There's a great source that really would have flushed this section out. I can't remember his name though. Who was it who wrote it? Oh, that's right! It was this guy who's sitting right next to me!" 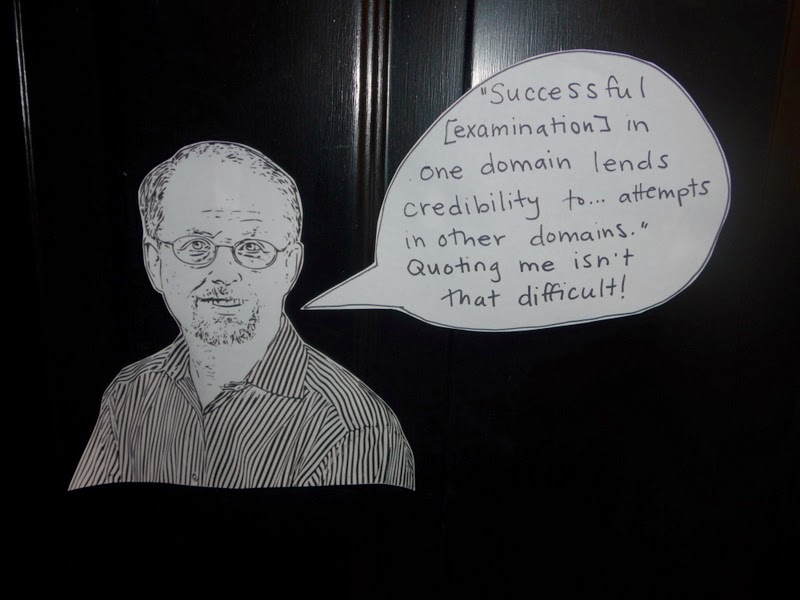 So before Andrew got home I printed off a picture of his advisor, found a quote that was wildly out of context (I won't link to the original place I found it for that reason), abused it a little more, and put it in a speech bubble. It originally came from Timur Kuran's Islam and Mammon (Princeton University Press, 2006, p. 62) and really says, “Successful Islamization in one domain lends credibility to Islamization attempts in other domains. So a significant consequence of the economic activities undertaken in the name of Islam is the support they give to the broader Islamist agenda."

But don't worry! I didn't only tease Andrew. I also told him congratulations. 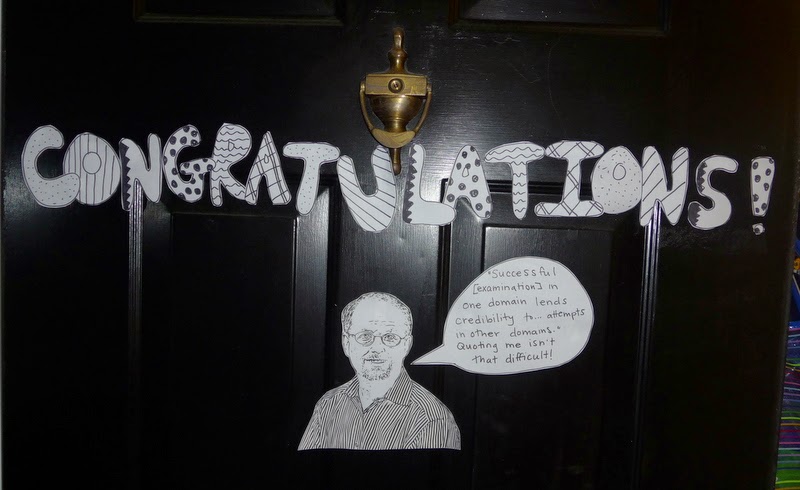 The girls made him cards as well. Miriam went off to her room and whipped this card out all on her own. The inside is a picture of "Mary Poppin's World." 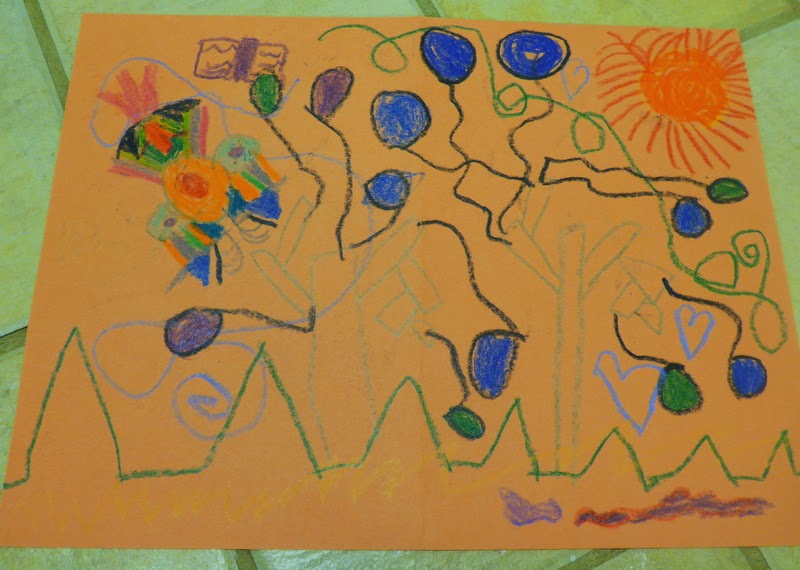 The outside bears her congratulatory message: 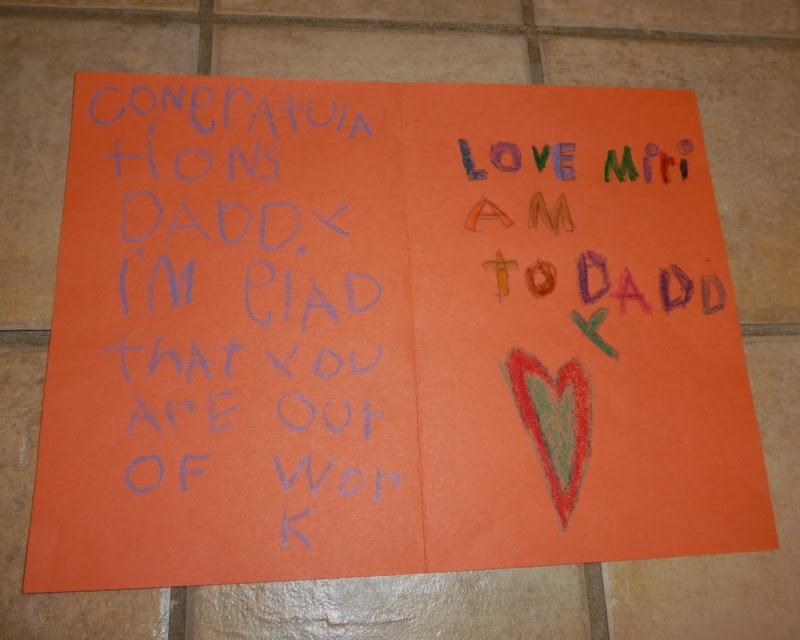 "Congratulations Daddy, I'm glad that you are out of work," she says.

This was one of those fabled parenting moments when you want to laugh so badly but can't. I held in my laughter and told her it was a wonderful card that Daddy would treasure forever (because he will).

I think she meant that she was happy he was finished with his exam because in theory today mark the day when Daddy can be more available for fun. In theory...

So, he's simply ran out of work like she runs out of library books.

I don't think she has any idea what the phrase "out of work" actually means.

I asked her how she managed to spell congratulations on her own. I mean, the other words I had no problem with her spelling without assistance but...congratulations? That's a long, complicated word!

"Oh, I just copied it off of my reading certificate," she shrugged.

That child has a living dictionary in her mind. If she wants to know how to spell a word she'll find it in a book she's read previously. Or on a box of cereal. Or on a certificate taped to her wall. Sometimes Rachel will ask her how to spell a word and Miriam will say, "Oh, just look at the Family Home Evening chart!" or whatever place she remembers reading the word before. It's an uncanny gift.

Rachel's card was pretty great, too. She drew a bunny for the front (after giving up trying to draw a bald eagle—did you know tomorrow is Constitution Day? I didn't. But now I do. And it's an early release day. And the girls are planning a neighbourhood parade to celebrate. Oh, boy.) and copied Miriam's spelling of congratulations (misinterpreting one of the l's for an i, obviously). 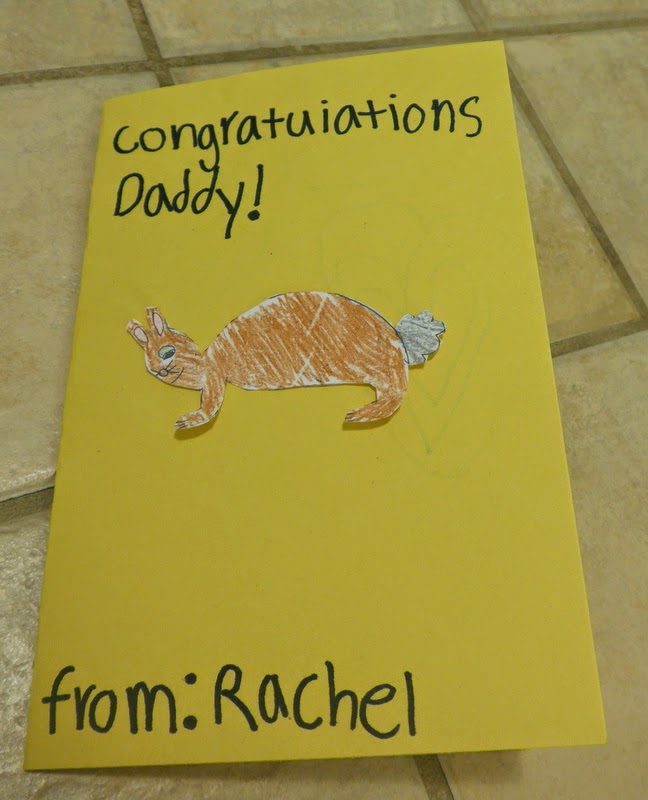 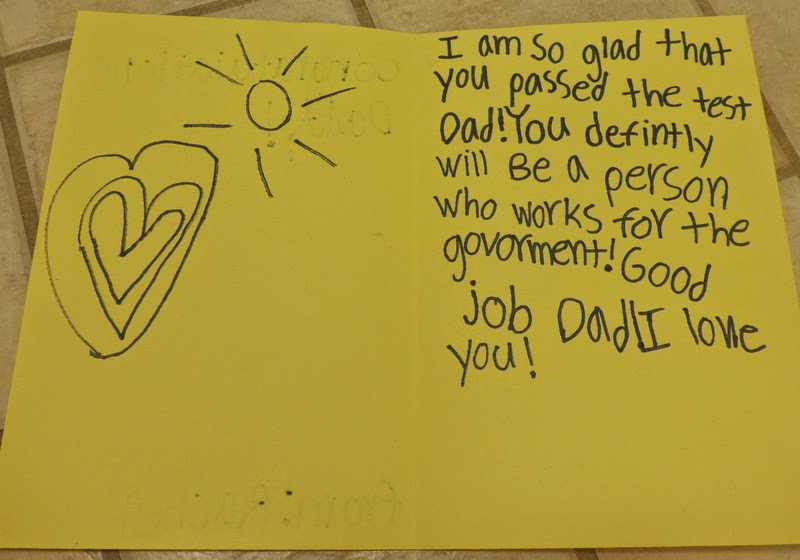 This card is also "defintly" a keeper and led Andrew to conclude, "Our kids have absolutely no idea what I do."

No, dear, evidently they don't.

But—good news!—you get to keep on doing whatever it is you do! Congratulations!
Posted by Nancy at 11:55 PM