End of the swimming season

We had a now-rare 80°F day on Tuesday so I took the kids swimming for what might well be the last day this year. It's just too chilly anymore. And we're wimps.

Somehow the kids are willing to brave the cold pool in May but not in September. It's probably because we got so used to the water feeling like a warm bath all through June, July, and August! And now we just can't stand it. Next May when it's as cold as it is now (or even colder) I'm sure the kids will be begging to go swimming again. 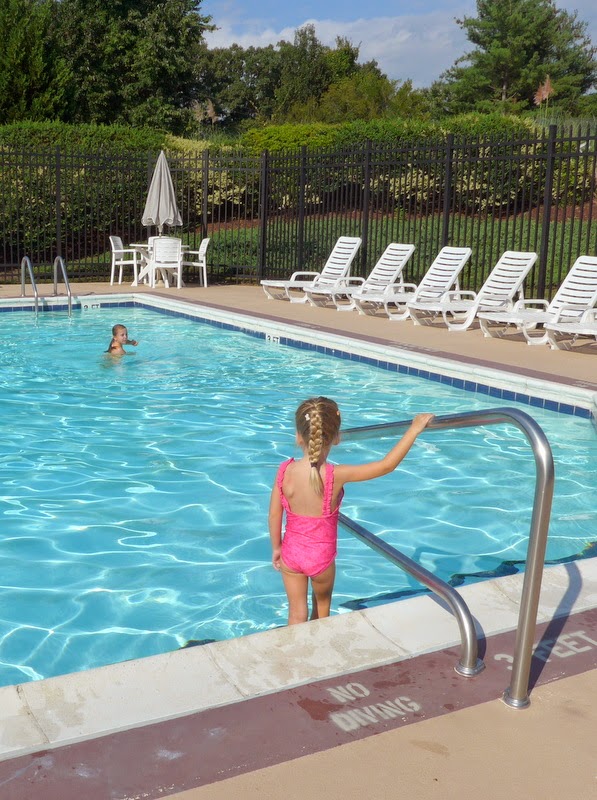 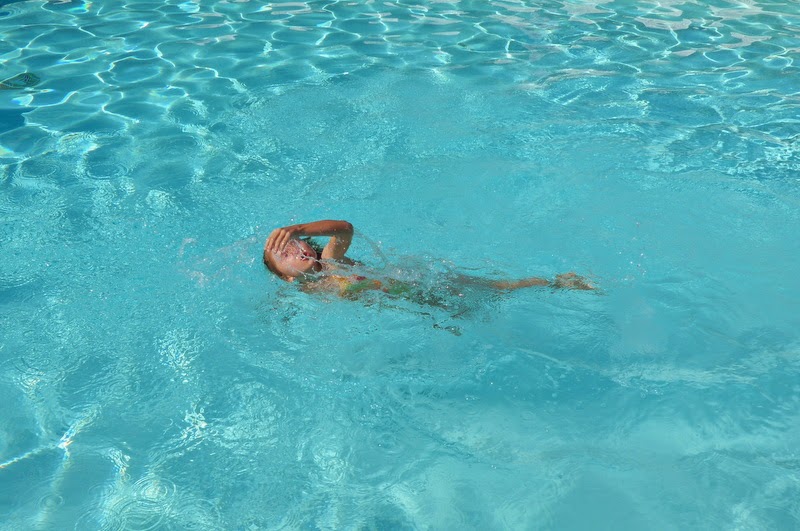 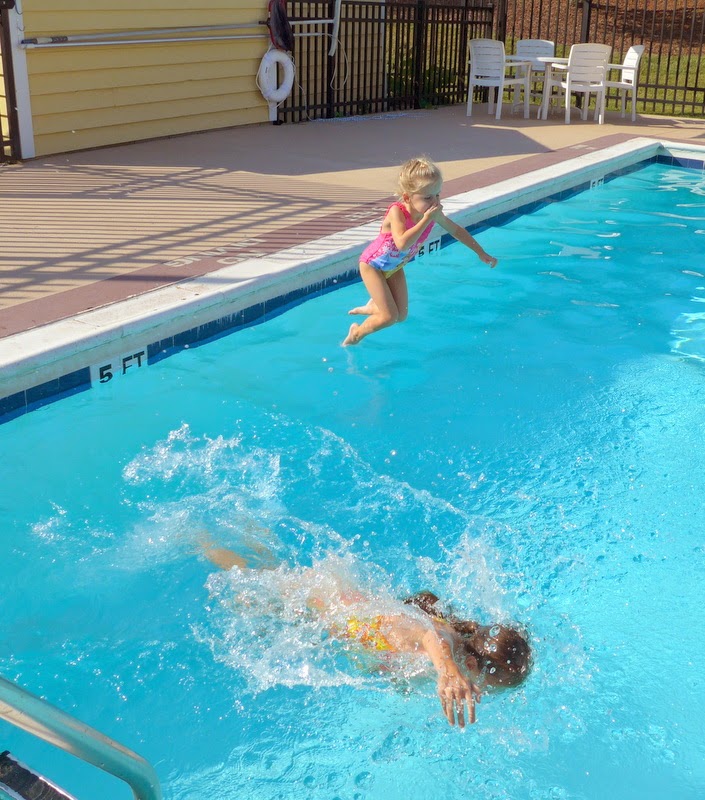 We spent quite a bit of time in the baby pool, which is usually much warmer than the big pool. Benjamin does "airplane jumps" in the baby pool and I've been meaning to catch him doing them on camera but neglected to bring the camera with me until now. He puts out his arms, says, "ZOOM!" and then jumps into the water. It's adorable. And rather splashy. 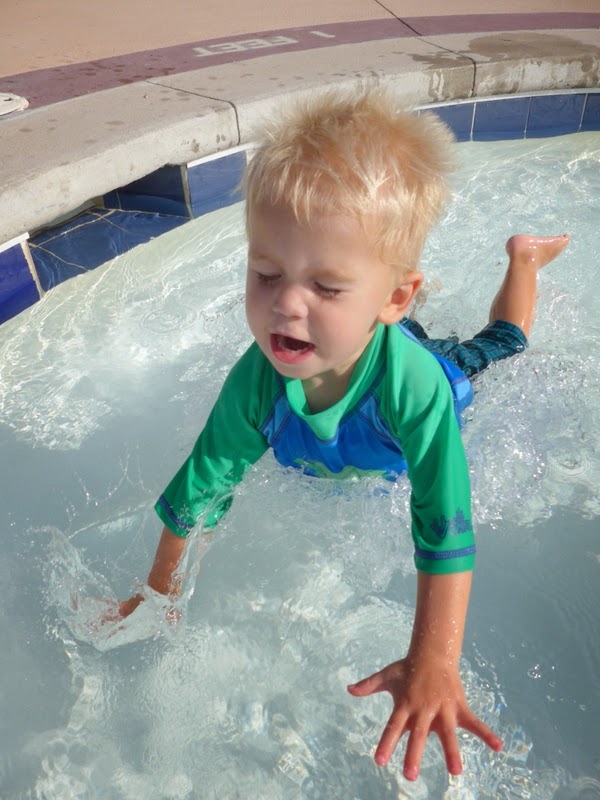 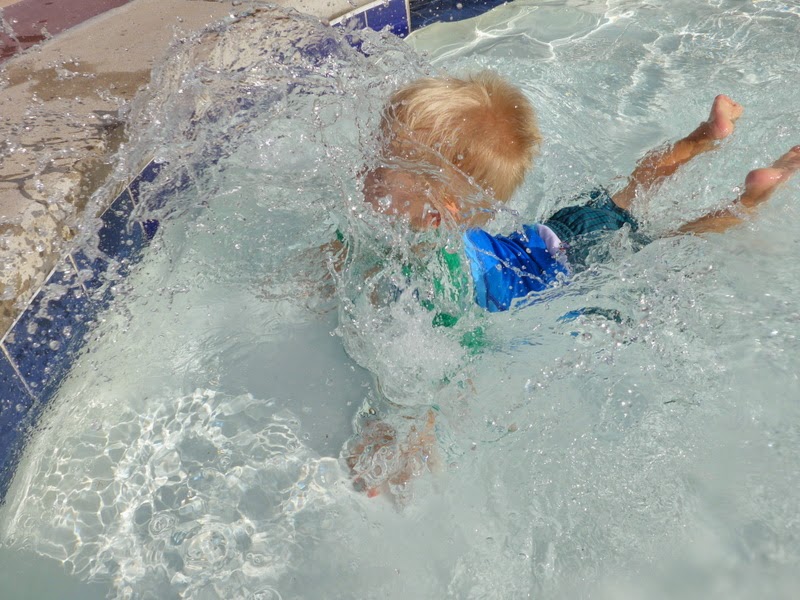 Rachel went from doggy paddling at the beginning of the summer to swimming multiple lengths, doing open turns at each end of the pool, breathing properly for front crawl, treading water, and surface diving down to the bottom of the pool. She can do front crawl, back crawl, elementary back, and dolphin kicks. Her breaststroke is atrocious, but it's a start. 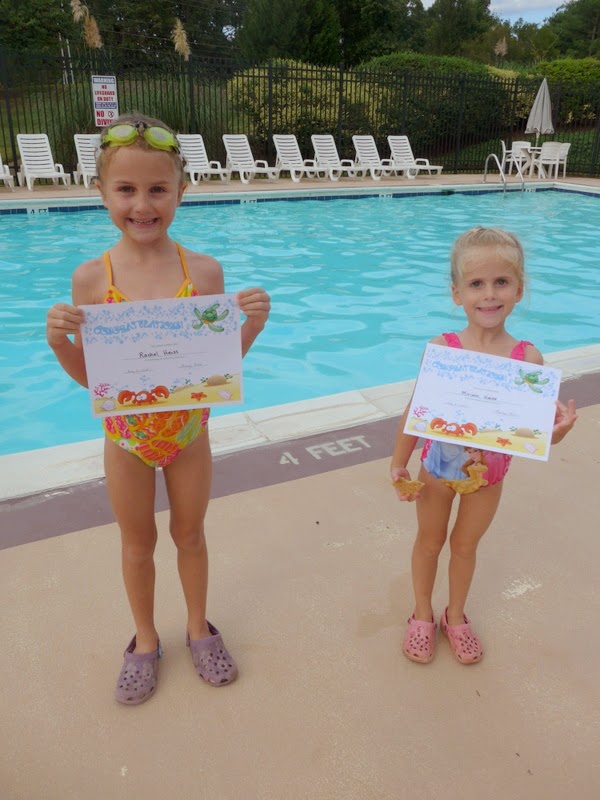 Miriam went from screaming bloody murder to begging to swim in the deep end, swimming with her "tummy scraping the bottom," and once I even made her swim the entire length of the pool (swimming a width is no problem). She can swim on her back and her front, can hold her breath for about thirty seconds, and can do hundreds of bobs in a row (don't ever offer to keep count for her).

Benjamin didn't have lessons, per se, but he also made big strides this summer. He went from acting like he was going to drown every time he got splashed to putting his whole head under water to blow bubbles. He can keep his balance in the puddle jumper now and he'll jump off the stairs and the wall to me (without the puddle jumper). He can monkey crawl all around the pool. But his favourite area is the baby pool. He loves doing "back floats," which for him means that he floats on his tummy and uses his arms to walk backwards. He used to choke a lot when he did this but now he knows to hold his breath when water splashes in his face. 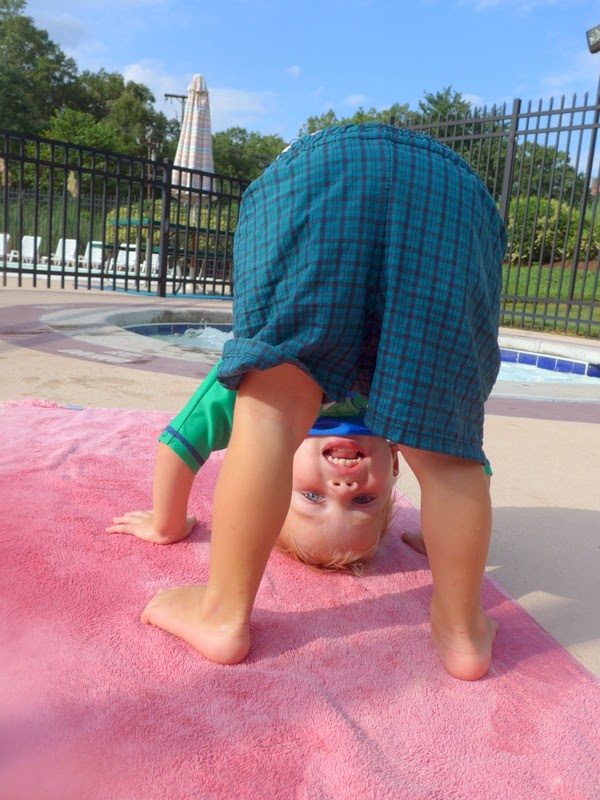 All three of them were great this summer, being so patient while I taught so many other kids (okay, only eight kids), and working so hard. Rachel and Miriam were pretty excited to get their swimming certificates. I figure since they're not signed up for real swimming lessons they should at least earn something. I loved earning my swimming badges as a child. 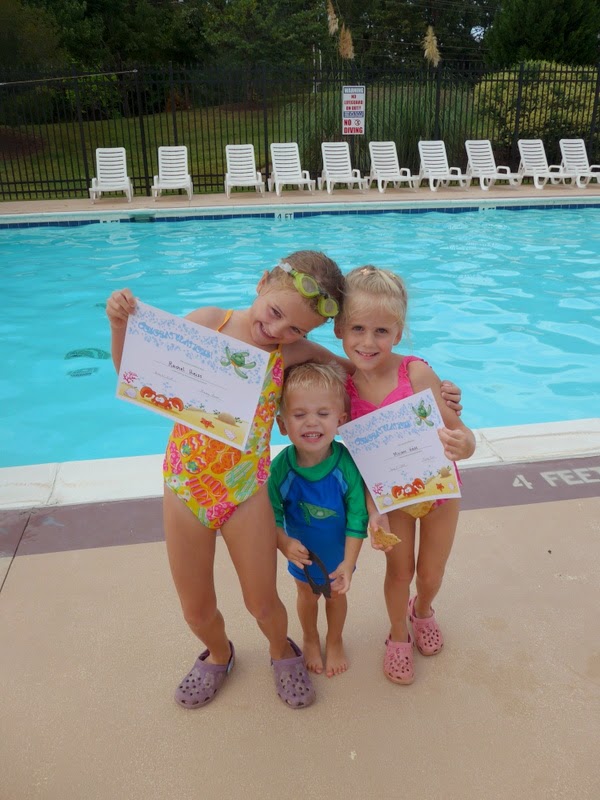 Here's a couple more pictures from the pool:

Benjamin really wanted to share Miriam's towel. He tried to lie down beside her but she pushed him off so later he went and lay on top of her. She was not impressed. 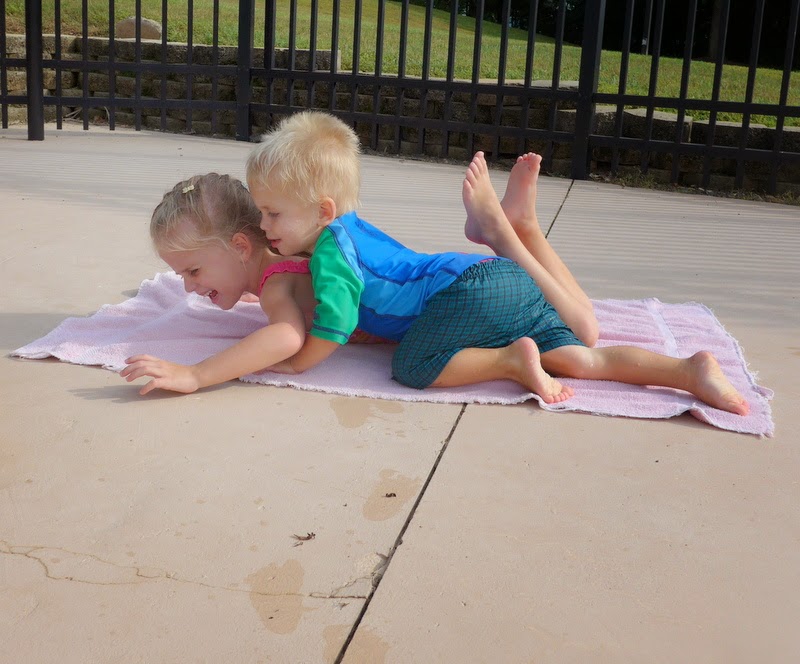 And here are the kids sunning themselves: 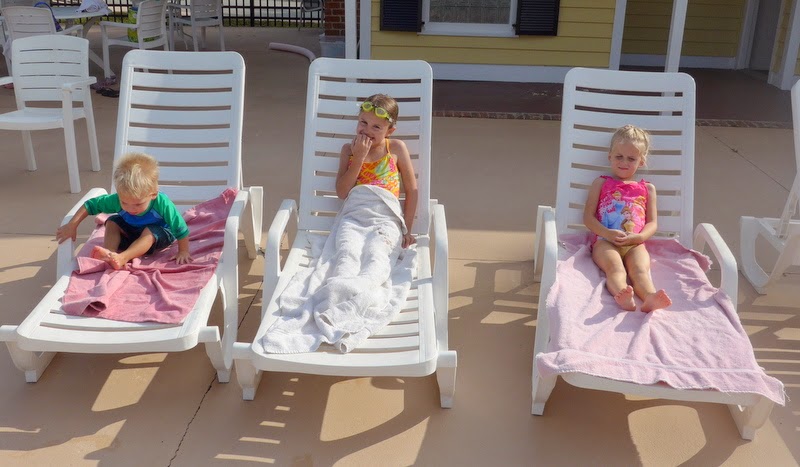 Moments before I took the picture they were all sitting back and smiling. But then I pushed the magic button that makes everyone stop posing—you know, the one that takes the picture.

Benjamin wanted to go to the park when we were finished. He always wants to go to the park. He also took off his swim trunks so you can see that he's wearing a swim diaper that was handed down from his sisters. Hey—it's got some blue on it, too (colour-promotion is a sham, anyway). 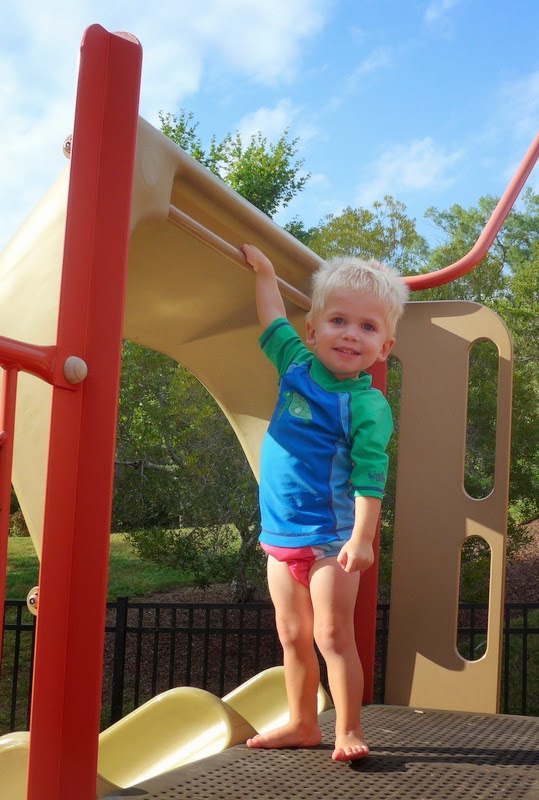 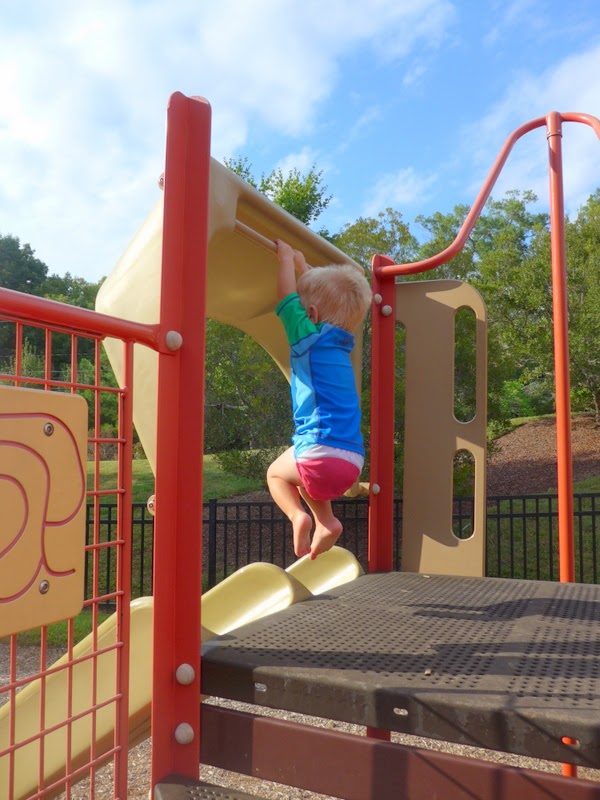 This is a silly face that he makes quite frequently. I'm not sure why: 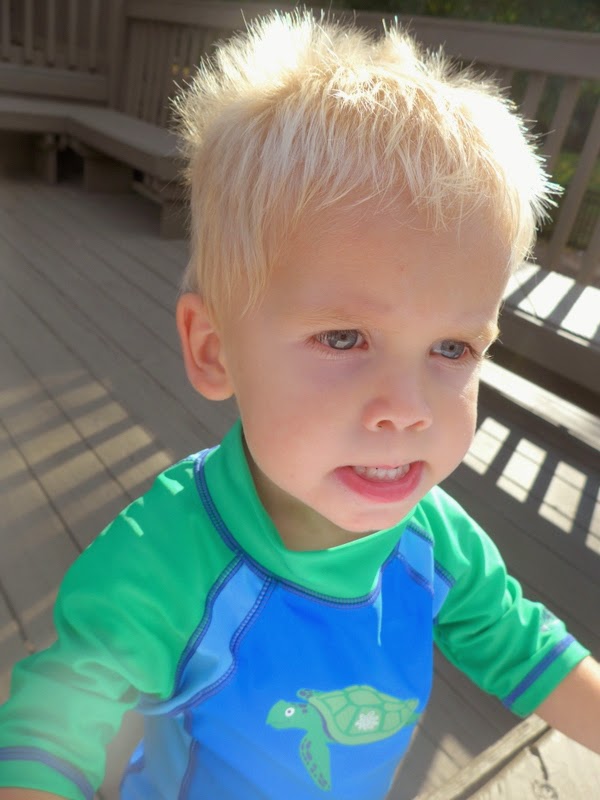 And a group shot on the slide before we said goodbye: 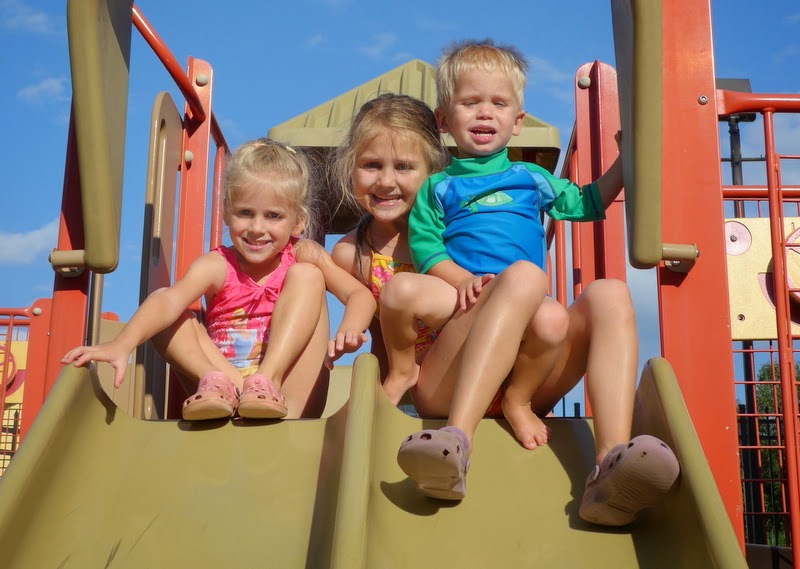