The more I read of the Anne of Green Gables series the more I'm convinced that if we lived in that time and that place our family would have quickly be cast out of any congregation as heathens. And I'm mostly okay with that.

I don't know if seriousness was a valued trait in society in general (I'm leaning toward: it probably was) or if L. M. Montgomery simply thought it was a trait all women (in particular) should possess. Her characters (female characters in particular) tend to always be stifling their laughter in front of children, so as not to encourage bad behavior. Later Anne or Marilla will sneak behind a door to let out a little giggle, but in front of the children they put on a veneer of seriousness.

I am missing that ability. I just don't have it. Oh, I've tried to pull a Mary Poppins and affect an air of serious superiority while Bert and the children are busy giggling themselves up to the ceiling. Sometimes I can pull it off but usually I end up giggling, too.

And so we found ourselves, once again, heaving with laughter in our pew in the middle of sacrament meeting.

On the whole, church went a lot smoother than last week. Benjamin was better behaved and the girls didn't pick a single fight. Several families who ordinarily sit around us were absent so it was unusually quiet, which kept the decibel level to a minimum for most of the meeting. It also had the undesirable effect of letting everyone around us know that the children making all that noise were undeniably ours.

But, like I said, they were at least better behaved than they were last week.

In the middle of the meeting Benjamin climbed up on Andrew's lap and looked up into his face. From that vantage point he had an excellent view into Andrew's nose.

I can't remember which friend told me this story, but I will share it with you anyway because it is hilarious.* Her family was playing pictionary for family night (look at that—I just planned FHE for tonight) and she was so little that instead of assigning her an item to draw she just got to think of whatever she wanted. She came up with something like this: 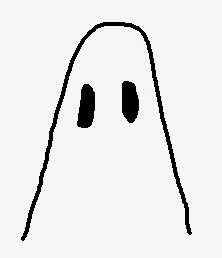 "We give up. What is it?" everyone wanted to know.

I tried to shush him but he just kept on yammering.

Andrew tried to keep Benjamin from pointing directly at Andrew's own nose, but Benjamin was persistent and kept writhing out of Andrew's grip so he could indicate with his entire body that there was a booger in Daddy's nose.

Perhaps we would have been able to quell him with one serious look, had we been able to manage it, but instead the two of us were laughing our heads off (as reverently as possible).

Eventually we gave up trying to get him to stop and Andrew carried him out of the meeting while he continued to holler, "Daddy! Booger! Daddy! Booger!" He marched straight to the bathroom to check out his nose and found that it was all clean (or at least, that's what he claims). Then he spent some time walking Benjamin in the hall until Benjamin had forgotten enough about noses to be able to rejoin the congregation without mentioning boogers again.

* I want to say that it was Kim Gardner, a friend who worked with me at the Orem Fitness Center (and whose father ended up being our bishop at Stonewood when we first got married) but I'm honestly not entirely sure it's her story...
Posted by Nancy at 10:31 AM