On Saturday it was boiling hot but Miriam insisted on dressing up as Queen Elsa. She had on a t-shirt and skirt, a floor-length slip, a dress down to her wrists and ankles, and a cape. The girls played outside all day.

Miriam came in mid-afternoon and asked if I would help her out of her clothes. She said she was "a little" hot. Her clothes were drenched in sweat. When I finally got her down to one layer—just her t-shirt and skirt—she said, "Oh, boy! That feels better! But now I won't be pretty for when Daddy comes home!"

I assured her that (a) she's always pretty and (b) she could put her costume back on for Daddy if she really wanted to, which she did, of course.

By the time we had to leave to pick up Daddy from the train station Miriam was back in her queenly outfit and Rachel was covered in dirt from head to toe. They were quite the pair to see.

We got to the train station just in time to watch the train pull up. 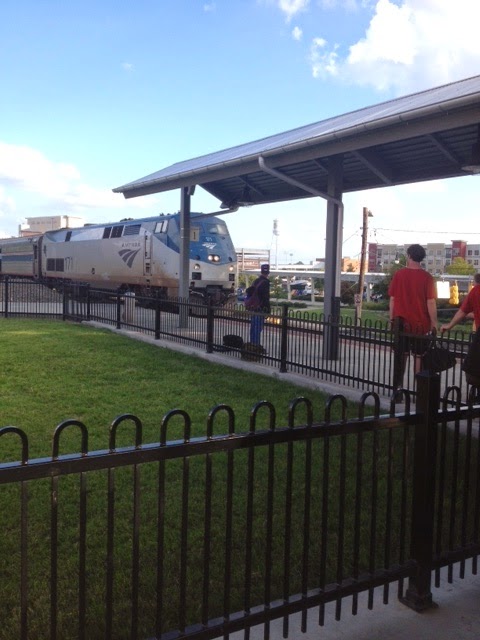 It was very exciting (and noisy). 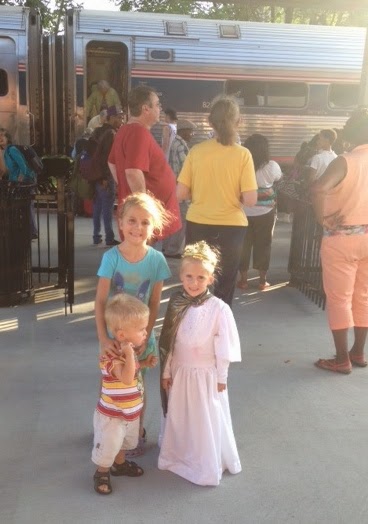 As luck would have it, Andrew was in the car right in front of us. When he came out I said to Benjamin, "Look—there's our Daddy! Say hi to Daddy!" and the man in the red shirt (standing behind Rachel) turned around and enthusiastically greeted me.

"Uh, hello..." I said, slightly baffled by his forwardness.

"I know you," he said, nodding his head.

"Oh, do you?" I said, inching away while trying to look like perhaps I wasn't.

"We live just over there," he said, waving his hand in an ambiguous direction and winking at me. "Same neighbourhood."

"Uh-huh..." I said, trying to let the conversation peter out while also not trying to seem too unfriendly.

Then his wife stepped in because I guess she sensed that her husband was completely botching their introduction (and was creeping me out). She said, "Oh, we live in [our neighbourhood] on [a street in our neighbourhood] in that little white house on the corner. We sometimes see you walking with your kids when we're sitting on our porch. We always give you a little wave but I don't think we've met formally yet. I'm [her name] and this is my husband, [his name]."

That was a much better introduction and after I thought about it I do recall waving to people who look kind of like them several times when we've been out walking. 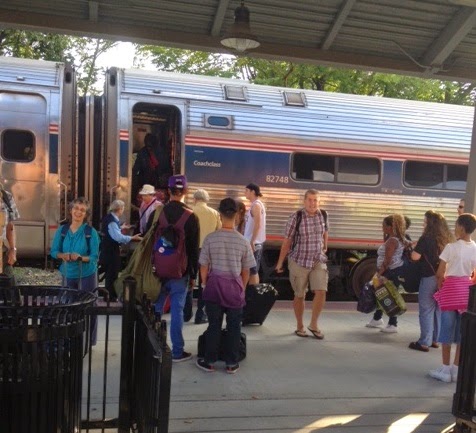 We were glad when Daddy joined us (and not just so the awkward conversation could be over and more because it's always nice to have him home)! He took the keys from me and drove us to Little Caesars where we picked up a couple of pizzas for dinner because I just didn't have it in me to make another meal that week. Truthfully, my kids were probably more excited about pizza than they ever are about any meal I make, so it made for a fun evening.

And in case you're wondering, Andrew says that bussing to DC from Durham is so much better than taking the train. He took the bus (Megabus) from Durham to DC on Tuesday and said his ride was great. It took about five hours. They made a few pitstops. And it was so cramped on the bus that he didn't feel guilty about not writing.

The train was noisy and bumpy and there were eleven stops between DC and Durham. It took seven hours for him to get home. And he felt guilty about not writing the entire time because he should have had room to work but couldn't because the train was just too chaotic.

It's been nice having him home even though we haven't seen a lot of him. He's in the final push to finish writing his comprehensive exam, so he's been spending all of his time doing that (which is quite understandable).
Posted by Nancy at 11:34 PM