This morning Miriam and I were practicing the ukulele together and Benjamin was pulling everything out of the "music cabinet." I didn't stop him until he pulled out the handbells. I love our handbells but they can only be used when I'm feeling patient. When Benjamin pulls them out he wants to have a free-for-all bell-ringing session and I just can't stand that, so when we use them I'm a little...controlling.

He settled for pouring over the book of Disney songs Auntie Emily sent us and I soon found myself playing songs for the kids while they danced and sang (the Disney song book is a little too advanced for Miriam to play along with). When we got to Supercalafragalisticexpialadoshus Miriam exclaimed, "I know what I want to be for Halloween!"

With that sort of a hint it's probably no surprise that she's decided on being Mary Poppins. We're currently reading Marry Poppins Comes Back (and so far I'm enjoying it more than the original story). Miriam found it at the library and requested that we read it instead of Princess Academy (which is "boring because there aren't any pictures! A book's got to have a few pictures!"). Rachel was okay with this because she'd already informed me that her "classroom has a copy of Princess Academy so [she] can just read it at school as fast as [she] want[s]. It's not that [she doesn't] like [me] reading to [her] but [she'd] kind of like to read it faster than, like, two chapters a night."

So we're reading more Mary Poppins and Miriam adores her.


At lunch she asked if I could make her a nice coat to go with her costume.

"Sewing's not that simple," I said, explaining once again that I don't exactly know how to work a sewing machine. Fortunately, I once bought Rachel a cute coat that would fit a Mary Poppins character perfectly (and she hated it and hardly ever wore it so it's nice and fresh for Miriam).

After lunch we looked up pictures of Disney's Mary Poppins so that we could start brainstorming about her costume. I believe very strongly that Halloween costumes should cost virtually nothing and that the children (and me) should use both creativity and whatever they can find lying around the house to construct them.

Rachel, as I've mentioned in the past, is a bit of a dreamer when it comes to costumes (I will never let her live down the year (last year) that she asked me to help her make a Magic Tree House costume—she wanted to be the actual tree house...in a tree). Miriam, however, is more of a realist.

We hopped online to looked at pictures and when Miriam saw the picture of Mary Poppins dressed in flowing white, with red ribbons, carrying a dainty parasol I saw her eyes light up, but she quickly moved past and pointed out a much more practical version of Mary Poppins—plain skirt and blouse, straw hat, carpet bag and parrot-head umbrella in hand.

"That one!" she said. "I want a costume like that one." She sighed and then continued with childhood honesty, "I really like that pretty white dress but I know you can't make that! So I'll just be this Mary Poppins instead."

She's still a bit of a dreamer, though. She decided that she'll be Mary Poppins and that Benjamin will be Michael and Rachel will be Jane and Andrew and I will be Mr. and Mrs. Banks. I told her good luck with that because (a) Daddy doesn't wear costumes if he can help it and (b) Rachel has all but decided she wants to be Alex Morgan for Halloween (a soccer player—that should be an easy costume to come up with even if no one will know who she is but herself).

One of Miriam's first requests was to borrow my umbrella.

"Oh, but I wish it had a parrot-head handle," she sighed.

So that was my project for the afternoon.

I found a pattern for Blu from RIO and tweaked it a bit to suit our needs (I just kept decreasing the head until it was about the same circumference as the umbrella handle and then kept going around until I made a tube that covers the entire handle—it ties on with a piece of ribbon). 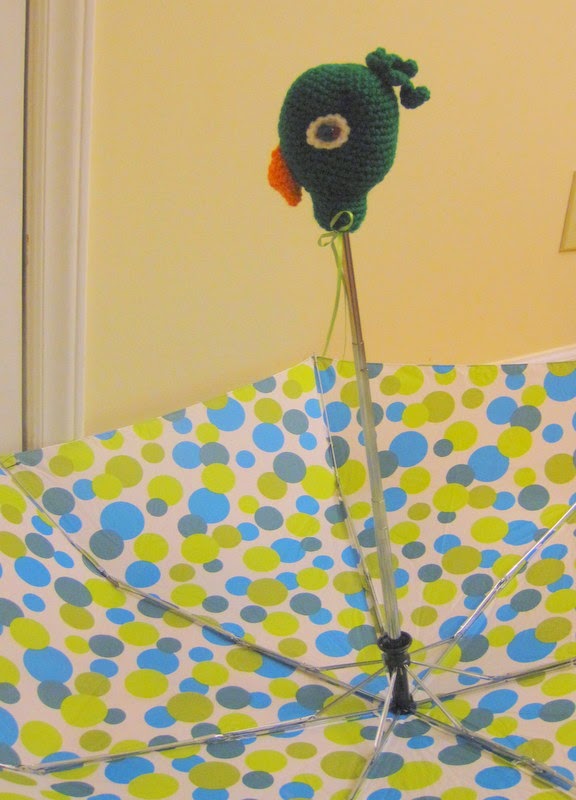 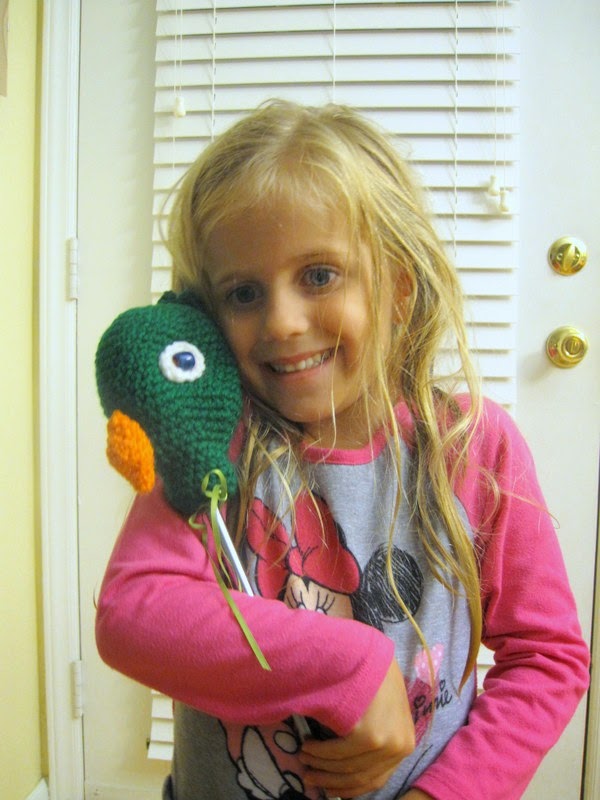 I'll have to take some better pictures of it later (like when Miriam has the rest of her Mary Poppins ensemble together...and we have some natural light in our house) but for now these will do. 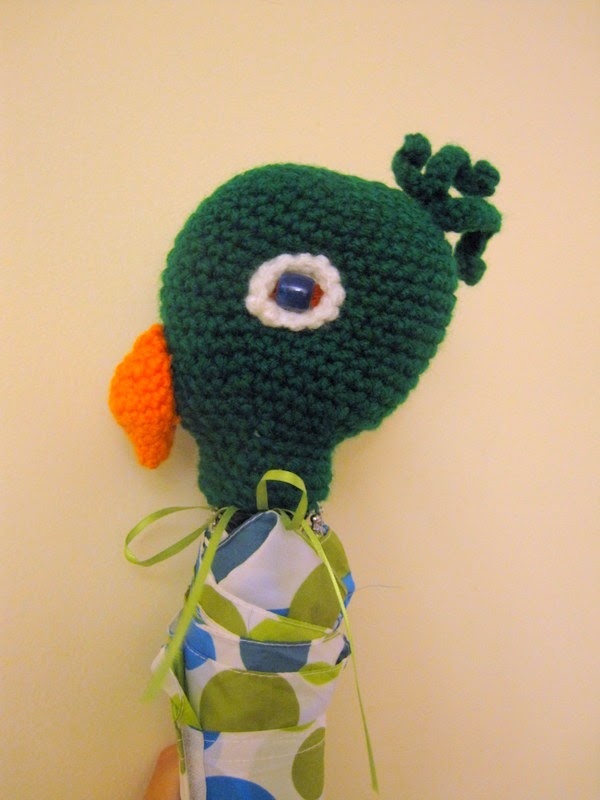