I decided to forego napping today in favour of earning an earlier bedtime. Benjamin's been staying up way too late at night and I figured napping was probably the culprit since I think he's now napped longer than either of his sisters (not counting that 6–9 months he spent not napping when he was around a year old).

Nap time was getting a bit ridiculous, too. I'd spend an hour coaxing him to stay in his bed and fall asleep to earn a half hour of shuteye. Not a great tradeoff.

After dinner I was so exhausted that I had to sit down and rest. Andrew and Rachel went into the bedroom/office to work on Rachel's science fair project and Benjamin and Miriam were commanded to have a few minutes of quiet time. Miriam pulled out a Junie B. Jones book and started reading to herself on the couch. Benjamin curled up beside her to listen to her mutter the words under her breath and sneak a peak at any accompanying illustrations. I just sat and relished the silence.

When I looked over at the kids on the couch I was surprised to see Benjamin nodding off (yes, he's sitting beside a pile of unfolded laundry)... 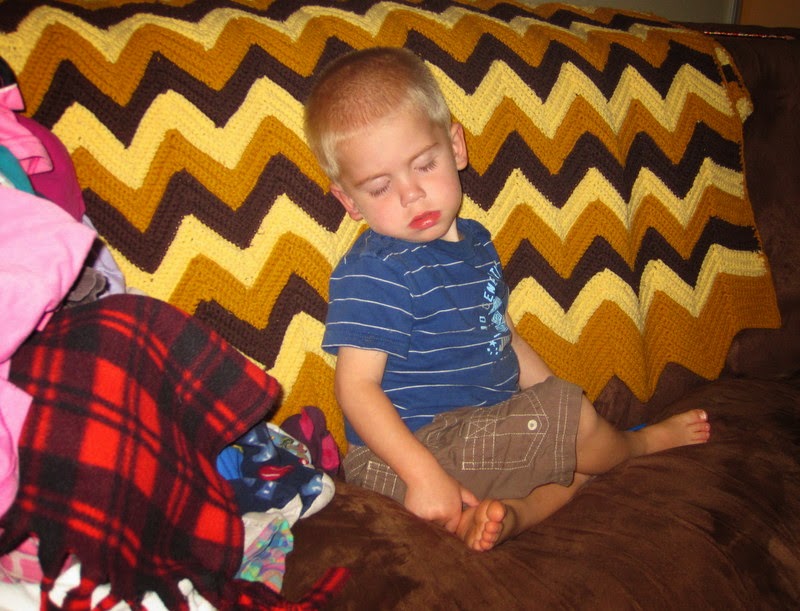 He had had quite a busy afternoon! We went for a short "diabetes walk" after lunch and I made him walk at my pace the whole way, so he was essentially running (for a half mile). He had originally wanted to go all the way to the park but it was threatening to rain and I didn't want to get caught in a storm at the park, so instead we came home and played outside.

Our neighbour came out to walk her dogs: Woody, Spike, and Vixie.

Woody is old and crotchety and he'll bite if the kids swarm him (so they don't). Spike likes fetch and doesn't mind getting a little attention, but he's rather stand-offish. Vixie is a puppy they found wandering around the woods behind our houses about a year ago. She's pretty sure she's just one of the kids. She loves playing with them and will flop onto her back and let anyone (and everyone) rub her belly. Her tongue lolls out of her mouth and you can tell she's in doggy heaven. One of these days I need to get a picture of her flat on her back, surrounded by neighbourhood kids.

Naturally, the kids had to spend some time with Vixie while she was out. Our neighbour stood in the street with her two grumpier dogs tight on their leashes and let Vixie come visit the kids for a minute.

Benjamin loves Vixie. So he decided to call after her until she was well out of sight. He probably spent a good ten minutes yelling for Vixie to come back and play, which wouldn't be a problem...except he can't pronounce Vixie.

Change that initial Vi to an Se and that's about how he pronounces Vixie.

It makes all his fussing over a puppy a little more embarrassing than it would be otherwise. And did I mention that we live right across the street from a pastor?

We played outside until Rachel came home from school and then we came inside to do homework and have a snack before going back outside until Daddy came home.

That little boy spent at least five hours running around outside, without having any rest time. He had every right to be tired. I was worn out and I wasn't running around like he was!

Still, I had to go on my post-dinner diabetes walk so I loaded him into the stroller and struck out. I tried to go a full mile but we didn't quite make it. It started to rain before we reached the half-way point in our route. Still, we went farther than we did for our lunchtime walk.

Can I complain about diabetes again? I realize I haven't been diagnosed yet, but my chance of passing tomorrow's test isn't high. I'm destined to fail. I wonder if they'd let me not take it if I just agree to be labeled diabetic. Probably not. Anyway...

I'm under orders to a) eat everything in sight and b) rest as much as possible and not do anything strenuous in a joint effort to put on enough weight and not go into preterm labour.

Want to know what you do to treat diabetes? You control your diet (cut down on carbs/sugar and add more protein and vegetables) and exercise after eating to help your body burn off any sugar swimming around in your bloodstream.

My diabetic regimen is in direct conflict with the gain-lots-of-weight regimen I've been on thus far.

It made me grumpy. And I was hungry all the time...because pregnant. So I was just hangry. Always.

I haven't cried yet about diabetes this time around, but I haven't exactly been happy about it either.

On our walk this evening Benjamin asked me if I was happy and I said, "You know, I'm actually having a hard time being happy today."

"That's not okay," he said sternly. "At our house, Mommy is happy."

Evidently that's a household rule he made up. A lot of our rules at our house start with "at our house," so I guess he figured that if he followed the pattern it would make the rule that much more official.

I'll try to be happy. It's just that meal planning is about one of the most annoying things on the planet as it is. I didn't need it to become more complicated.

This evening when I apologized to Andrew for being hangry he said, "You're not just hangry. You're hangrabetic."

Perhaps, though, we should say that I'm hangrabetant: hungry, angry, diabetic, and pregnant. Or is that taking things too far? I hardly recognize any words in there anymore.

I'll have more than three weeks to figure this thing out this time, so maybe I'll fall into a groove of sorts a little later on and it won't be such a roller coaster. That's what I'll hope for.

Anyway, one more funny story. That doesn't mean everything I said today was funny, not remotely. Rather, it means that the following story is one that I find funny.

Rachel's been accident prone lately. She must be growing or something because it's as if she doesn't know her body at all. She keeps slamming into doorways and tripping over her own feet. The other night she stormed into the living room and collapsed in a sniffling heap on the couch.

"I'm going to be all black by the time I grow up!" she raged.

Andrew and I looked at each other and exchanged confused looks.

"What do you mean, sweetie?" I asked, rubbing her back.

"I just hit my elbow on the door! Now I'm going to have a bruise there, too!"

"Oh, honey," I said as sympathetically as possible. "I'm sorry that happened. But I think you mean black...and blue. You're all black and blue."

It was certainly a humorous moment for Andrew and me as we tried to contain our laughter. Her getting that idiom wrong is about as funny as our toddler standing on our front lawn and screaming "Vixie!" at the top of his lungs half the afternoon.

(Oh, and Benjamin fell asleep about two hours earlier than he usually does so I guess our exhausting afternoon paid off).
Posted by Nancy at 9:56 PM