End of cheer and kindergarten registration

This past Saturday Miriam had what I think was her last day of cheer...maybe. I'm not sure what's happening with snow make-up days and such. She had a good run and thoroughly enjoyed herself. Plus she got a trophy so she's definitely feeling like a champ. 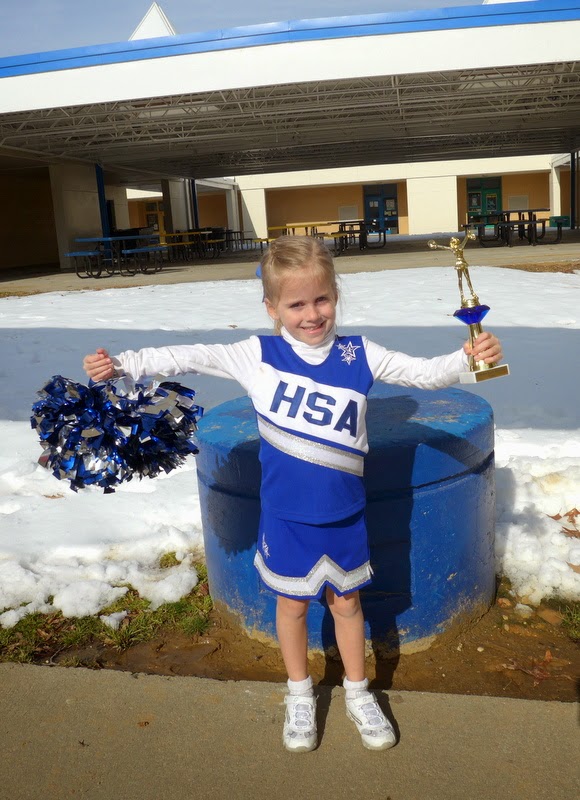 And just in case you haven't seen enough pictures of her doing her cheer thing, here are a few more: 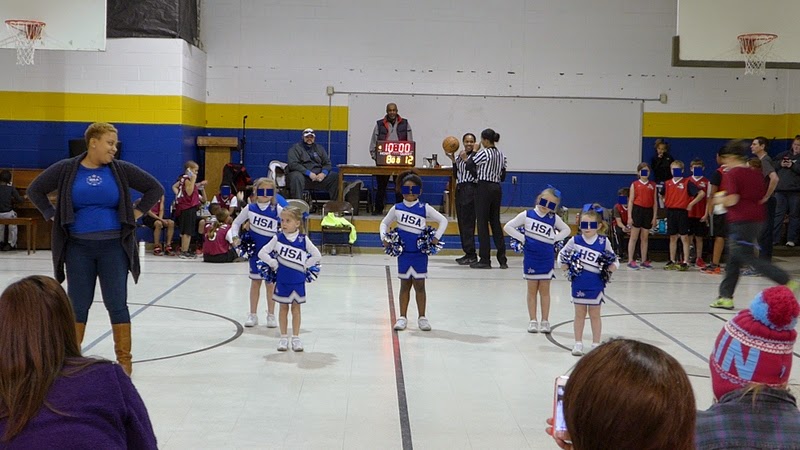 This time they actually made the basketball teams get off the court while the girls cheered, so that was a nice change!

It's weird to think about how old the kids are. Miriam is older than Rachel was (and Benjamin is about the age Miriam was) when we moved out to North Carolina.

Rachel was 5 years and 1 month old when we moved out here—and she started kindergarten the following week. She's now 7 years, 7 months old and grade three is staring her in the face. The first day of next school year is her birthday.

Miriam was 2 years and 10 months old when we moved out here. She's now 5 years and 4 months old. She won't be starting kindergarten until July, but that's only a couple months away. Still, I find myself being amazed that Miriam's doing all sorts of things that Rachel didn't do until kindergarten only to realize that Miriam'll be quite a bit older than Rachel by the time she starts (because she'll be 5 years and 10 months old).

Benjamin was 2.5 months old when we moved out here. He's now 2 years and 9 months old.

Zoë wasn't thought of yet. But she'll be here in three months (+/- a couple of weeks).

I almost feel like life is repeating itself, but really I think it's just that we've had a baby every two years or so.

Anyway, we got Miriam's selection letter in the mail the other day (and the first thing she requested to do after reading the letter was to go school supply shopping). Rachel switched schools for grade one, if you remember, and we wanted Miriam to start out in that school as well so we had to enter a lottery for her to be admitted. I read that letter with mixed emotions. I was relieved that she and Rachel would be at the same school and I was excited that Miriam would be starting kindergarten because she's been waiting for this moment for ages. At the same time, I felt a little sad that it was already time to give her up during the day.

She's a little socialite and is so excited about kindergarten for this reason. Sometimes I just cannot fill her need for conversation and interaction. But she has been such a joy her whole little life. I'm going to miss my little buddy so much!

One of the questions on her paperwork today was, "What's your favourite thing about your child?" and I thought to myself, "Gee, what do I even put down? This child is wonderful!"

That's not to say she never drives me crazy because she certainly has her moments, but let's just say that when I was filling out the questionnaire about her behaviour and personality I was able to check all the "best" boxes. I didn't have to check the "my child has trouble controlling his/her emotions and will throw fits for hours without being able to stop" box this time.

When I was talking about my ambivalence about sending Miriam to kindergarten Rachel said, "Hey! You never felt that way about me! You were happy to see me go! I know! I read the blog!"

"That's because you weren't very nice to me when you were little," I said.

"If I start being mean will you be happy when I go to kindergarten? I want you to be happy for me to go, too!" Miriam said.

I am happy. I'm just also sad. Miriam is 100% over the moon to be a registered kindergarten student. She'd start today if she could. Meanwhile, I'm trying to think of ways to enjoy her before she's out of the house for the day. I think I'll appreciate having her otherwise occupied while I'm trying to get into the new baby groove again, but I think I'll also miss her.

She said it's hard to believe...but what can you do?

Nothing, I guess. Kids insist on growing up no matter what.

PS With the way Benjamin's been behaving lately (very much a terrible-two going on three-nager) I'd be happy to ship him off to kindergarten today. We'll see how I feel when he's five.
Posted by Nancy at 10:30 PM