Last night for family night Andrew gave the kids a lesson on gestational diabetes and how they can help our home be a happier place. The essence of the lesson was that Mommy gets really possessive about food when she's "dieting" (and by dieting I mean controlling my diet, not restricting calories).

When I was pregnant with Benjamin (we were living with Andrew's parents at the time) I had a stash of high-protein snacks—nuts and beef jerky and things—to balance out my daily with something other than peanut butter. One day my bag of beef jerky went missing and with all my pregnant emotion I wailed, "Who stole my beef jerky?!"

Grandpa sheepishly brought it up from his office. The pesky Beef Jerky Thief has yet to live that moment down. That, or I have yet to live down how upset I was about my beef jerky being missing. Either way you shake it, it's a perfect illustration of how possessive I get about food when I'm pregnant and on a stricter diet than usual.

My children are snack thieves as well. I understand that I'm in charge of feeding them and I usually put them first but currently I'm (constantly) thinking about what and when I need to eat next.

The other day I got out a string cheese, opened it, and took a bite. While I was chewing, Benjamin casually walked by, slipping that string cheese from my hand as smoothly as a relay racer passing a baton.

"Thanks," he said, and then he looked at it and frowned. "It's broken."

"Okay," he shrugged, heading out the front door to play.

I was getting a new string cheese out of the fridge when Miriam walked by and said, "Is that for me?" And then Rachel was like, "What's for her? Can I have one, too?" And I wad like, "Leave me alone! I just want a snack!!"

So after getting cheese out for everyone I finally got some cheese for myself. Not that it's really a big deal to get cheese out for everyone. But this happens every time I try to get food ready. Even if I've just fed the kids, they'll still want what I'm having for a snack. Like, "Oh, but you only gave apples to us. Why do you get apples and almonds?"

Other times it takes me an hour to convince them to get their shoes and jackets on and then they walk like snails and insist on balancing on the curb and picking every dandelion they see and I think to myself, "Well, this walk was about as taxing as sitting on the couch."

So instead of always forcing them to go on walks I'll turn on a yoga movie. Recently if I turn on a Yoga Kids movie they abandon me after five minutes and I'm left doing alphabet yoga on my own. But if I turn on my prenatal yoga they all want to do it with me. Weirdos.

Here's Rachel thinking she's funny because she followed the directions and placed "one hand over her heart and the other hand over her growing baby." Miriam and Benjamin chose to remain with their hands in namaste. 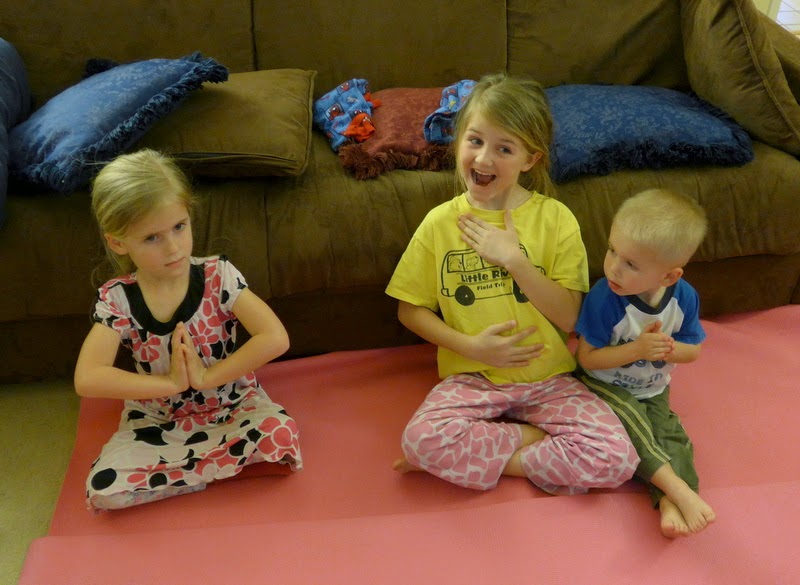 I'm in the third trimester and I'm high risk—if this baby stays in for 3 weeks and 5 days she'll beat out Benjamin in "days spent in womb"—so I'm doing the most modified poses. I'm literally sitting down on a chair while doing yoga, but I think that still counts as exercise, right? Sure.

Anyway, Andrew told the kids they have to let Mommy have her food and they have to be supportive of Mommy exercising after dinner so that all of Zoë's and Mommy's organs can stay nice and healthy. And they also have to let Mommy nap because pregnant ladies are grumpy and tired anyway, but when you're getting a shot of hormones once a week and have to poke your fingers four times a day and can't have any cookies your seven-year-old whipped up all by herself then you feel extra grumpy.

Yes, Rachel made cookies on Sunday. And I did eat one. Just to test it. But then, of course, I wanted more even though I couldn't/shouldn't. She did a great job!

Benjamin was rather excited about cookies. We had stake conference instead of our regular meeting, which was nice because it's only two hours and we didn't have to be to church until 10 AM. But it's also two hours in the same room, sitting in the dark (our stake conference is broadcast) and Benjamin got so bored (and Andrew fell asleep).

At the end he kept turning to me every few minutes and saying, "Maybe—us get home, me has cookies? Maybe? Say maybe, Mom. Maybe. Maybe. Maybe."

My kids know that maybe really means maybe, I think. Rachel mentioned once that her friends at school hate it when their parents say "maybe" or "I'll think about it," because "that always means no."

"But that's not the way it is at our house," she said. "At our house you really do think about it."

I think that's mostly true. Yes means yes. No means no. And maybe actually means maybe—even if I often use it when the answer is no in order to put off inevitable toddler tantrums until we get to a private location and I can really say no (like whether cake is an option after church—I'm not going to say no to that in the middle of a quiet meeting).

Anyway, Benjamin was super excited Rachel wanted to make cookies. And I was, too. For the future, not so much for the present because I can't have any cookies.. But in about ten weeks I can say, "I just had a baby, make me cookies, Eldest Child," and then I'll magically have freshly baked cookies, without having to lift a finger (more or less).

Also on Sunday while we were at church my orchid blossomed! 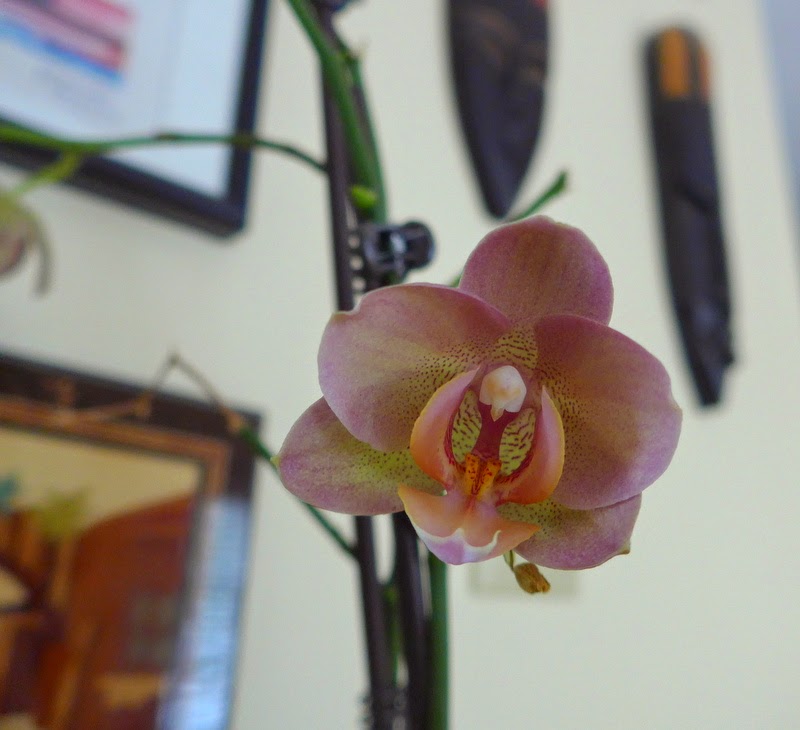 That was rather exciting to come home to. Another flower opened on Sunday afternoon and I'm still waiting for a couple more (and hope that we'll get a few more beyond that, though there isn't much evidence that'll happen yet).
Posted by Nancy at 12:19 PM