Looking at the forecast last night we knew our schedule would probably be thrown off, but when our alarm went off at 6:30 there was still no news so Andrew went ahead and took a shower. I was a little surprised when he climbed back in bed after his shower instead of waking me up.

"What are you doing?" I asked.

Sometimes he does weird things in the morning when he first wakes up.

"Church has been postponed until 2:00. Freezing rain or something."

So we slept in until 9:30 because our kids are exhausted from staying up super late the last few weeks. Seriously. They're out of control. I was telling little girls to stop whispering to each other at 10:45 one night. Sheesh!

Sleeping in was wonderful. Then the kids spent the morning playing LEGO, we Skyped with Andrew's parents, we ate breakfast and lunch, and then we went to church for an hour—that's all.

We gave someone from our ward—a born and raised southerner—home and he found our ice scraper on the floor of our van.

"What's this?" he asked, picking it up. "Looks like it probably comes in pretty handy. Is it for cleaning your car somehow?"

He rubbed it on the carpet.

"It's for scraping ice and snow off the windshield," I explained.

Those were my outside words. My inside words were, "No wonder snow shuts this place down."

When we arrived home Andrew immediately started on dinner (because it's fast Sunday but he's the only one fasting because I don't fast when I'm pregnant and the kids haven't even attempted such a feat yet) while I rallied the troops to clean the living room.

Rachel wanted to play the Harry Potter LEGO game she got for Christmas, which we hadn't even opened until today because it involved building the board and that just looked too intimidating of a project with three excited children bouncing around. Today, though, there must have been an abundance of patience in the atmosphere because we put it together (which easily took longer than it did to play the actual game) and played through one round before Benjamin had a complete meltdown. 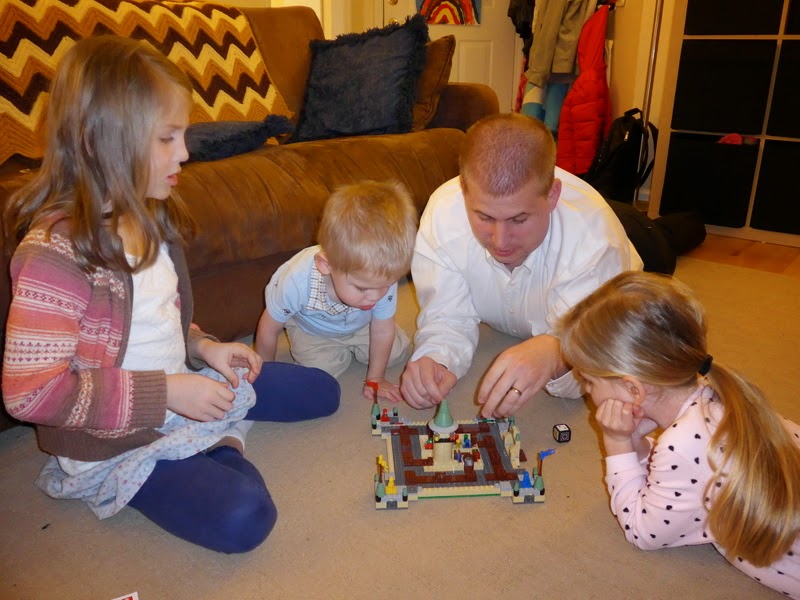 Next time, though, we won't have to put the board together, which will be nice. The game is a little complicated but the girls did pretty well with it, though Miriam needed quite a lot of help. She kept worrying her character was going to "die" if she ran off the path like it would on some labyrinthine game we played with Uncle David in Utah (probably Tsuro).

It was fun and quick, which is just how I like my games!

After one round, though, we had to give it up in favour of a game Benjamin can play. He chose "Let's Go Fishing!" The three kids played that for a while before getting bored. And, yes, Miriam went from pyjamas into a Sunday dress. She got too hot, I guess, but she'll be back into pyjamas soon (because so far we've heard nothing from the school, which I can only assume means school's on tomorrow). 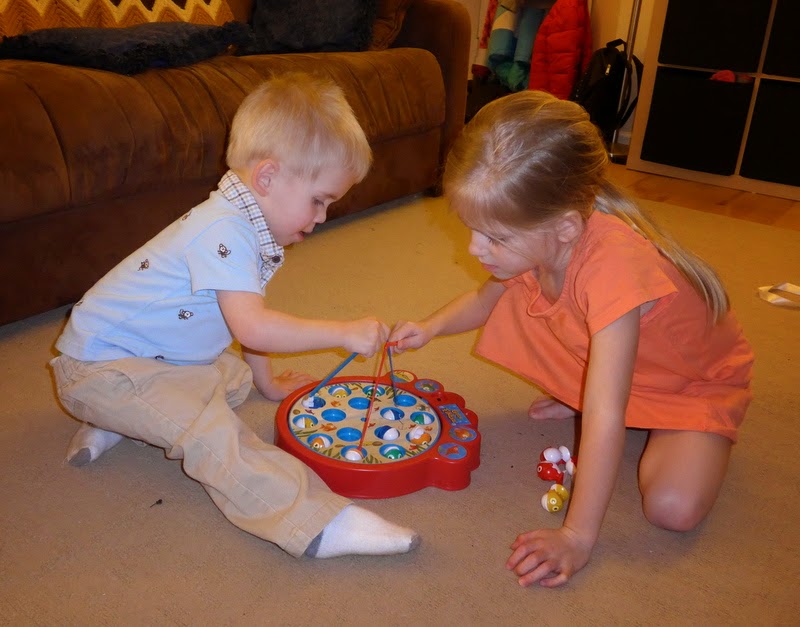 And then I played "Spot It!" with Miriam and Benjamin while Andrew taught Rachel how to play Mancala. Playing "Spot It!" with Benjamin is fairly hilarious because he just shouts the name of a random item on his card and puts it in the pile, completely ignoring the matching aspect of the game. He "wins" frequently but no one seems to mind too much; it keeps him happy and he doesn't throw off the rhythm of the actual game everyone else is playing. 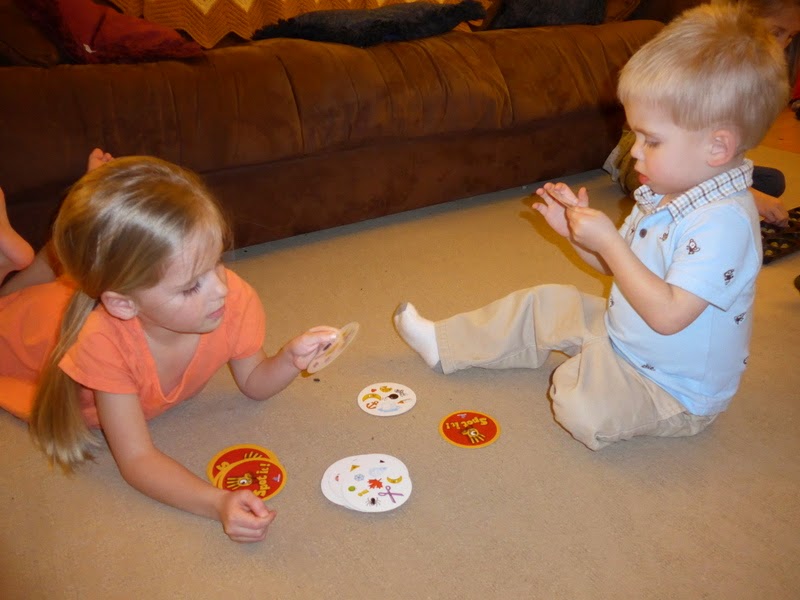 Here's Andrew explaining Mancala (he picked up the board in Ghana, it has cocoa bean counters): 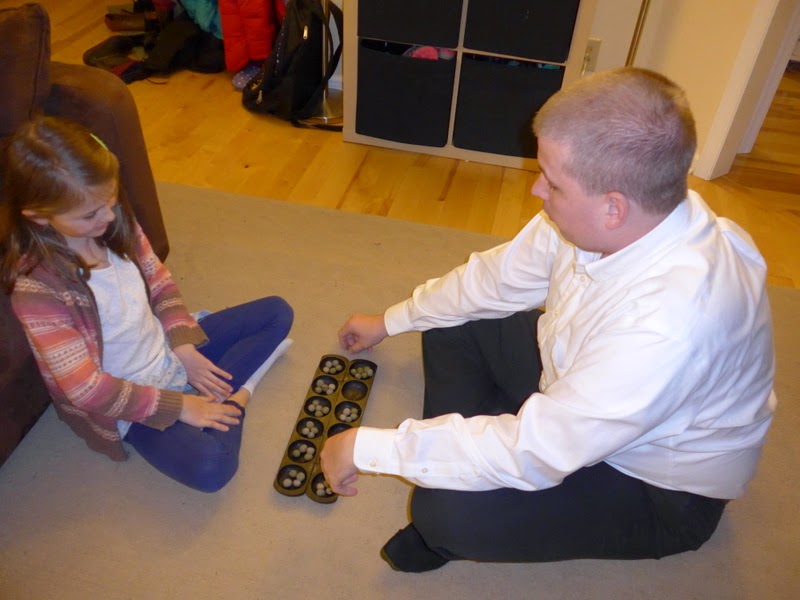 And here's Rachel taking a turn: 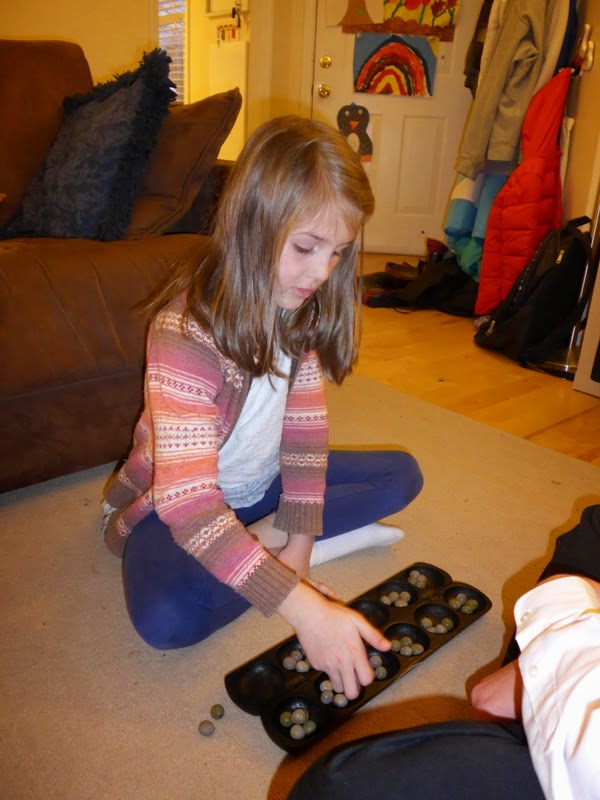 Andrew beat her several times in a row but she smashed him the last time they played. Then he sent her to put her pyjamas on. Was that correlation or causation? I'm not sure.

While Rachel was getting ready for bed Andrew gave Miriam a crash course on Mancala and now the girls are playing against each other with Daddy coaching as needed. 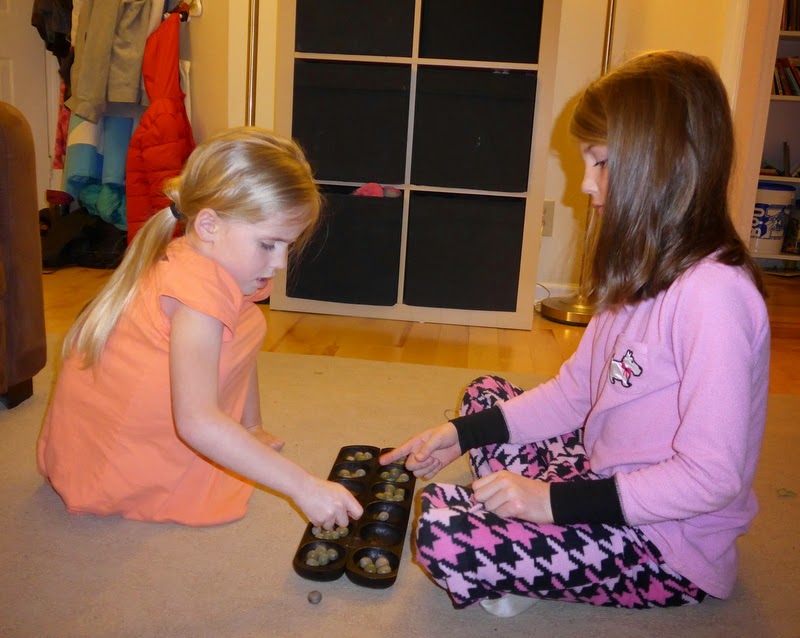 Soon it will be time for stories/scriptures/prayer and bed! Happy school day tomorrow!
Posted by Nancy at 6:40 PM