Spring has sprung (I hope)

On Friday we had a two hour delay before school because it had rained on Thursday night and then supposedly froze overnight. What happened in our area was that it dried out over night and by the time we went out to catch the bus at 10:00 there was a distinct something in the air that told us spring was here.

It was still cold—below freezing according to official documentation (but somehow the water was defying laws of physics and was not freezing)—but it was different from the bitter nippiness of deep winter days. On this particular morning, winter was bidding us farewell and spring was telling us hello all at the same time, so even though it was cold it was pleasant.

I'm hoping that's the last of winter because I hate winter. So much.

Sometimes when I tell people this they say something like, "You're from Canada. How can you hate winter?" to which I retort, "I'm from Canada. That's why I hate winter."

I don't suffer from allergies (unlike Andrew) so spring and I are pretty good friends. I'm looking forward to it.

This morning our windshield was frosty, but I think this will (hopefully) be the last time that happens and really I think we can blame part of that on daylight savings since we suddenly found ourselves going to church an hour before we normally would. Why do we subject ourselves to such nonsense?

Anyway, by the time we got to church things had warmed up quite a bit and we had a wonderful day. We got to borrow one of my friend's twins during sacrament meeting, which Benjamin was over the moon about (except that the baby kept putting things into his mouth) and Rachel had a fun time holding a baby small enough to not mind being held. He was wiggly enough, though, that when we gave him back Rachel sighed with relief.

After church everyone rushed to change into shorts (except for me—I stayed in my church clothes because getting dressed takes so much effort (lifting legs and crazy stuff like that) and because the skirt I wore comes with such great memories) and we had lunch sitting on the back deck.

Here's the skirt I wore today—I'm 27 weeks and 5 days, for the record (I usually round up to the next week when people ask how far along I am on Sundays (so I'll just say that I'm 28 weeks) but today I accidentally rounded up my rounding up and told a friend I was 29 weeks (wishful thinking, I guess)): 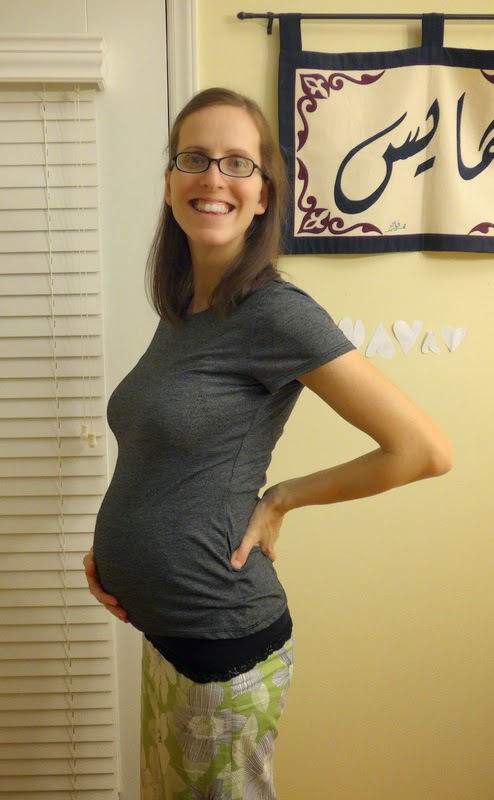 Memory #1: My friend Sara gave me this skirt when we lived in Egypt, but Andrew and I like to joke that her husband Kevan gave it to me for Valentine's Day. Why? Because he got it for her while he was somewhere...(Kuwait?)...and gave it to her for Valentine's Day and she was like, "That's sweet of you but you obviously have no idea what size of clothes I wear." So when we went to their house the next day for dinner/to tutor Jessica in math, she gave the skirt to me (along with the story).

Memory #2: The skirt didn't quite fit me either, but that was okay because I was expecting Miriam and knew I'd grew into it, which I did. But then? Well, then I grew out of it. I packed it when we we took a trip to Israel (when I was 33 weeks pregnant—something I can't believe I did now because can you even imagine what a headache it would have been had Miriam come as early as Benjamin? Not only would we have been living in a foreign country, we'd be visiting another country on top of that. The paperwork alone would have killed us, let alone the whole having a premature baby in a place that's not our home). I had worn the skirt to church the previous week but when I pulled it out to wear to church in Jerusalem and tried to do up the zipper the zipper shattered and I ended up having to sew myself into the skirt. It was a rather hilarious morning.

I still haven't fixed the zipper. Now I only wear it when I'm super pregnant (with a bella band to keep it up). Maybe one day I'll fix it because it really is a great skirt. I'll just have to learn how to sew first, probably.

Anyway, we had lunch out on the deck and then got ready for nap time. We'd just put Benjamin into bed when Rachel started running around the house shrieking with joy. She was so excited that she wasn't even making any sense and I was very confused about what was happening. Turns out, she went to wiggle a loose tooth and it popped right out of her mouth: 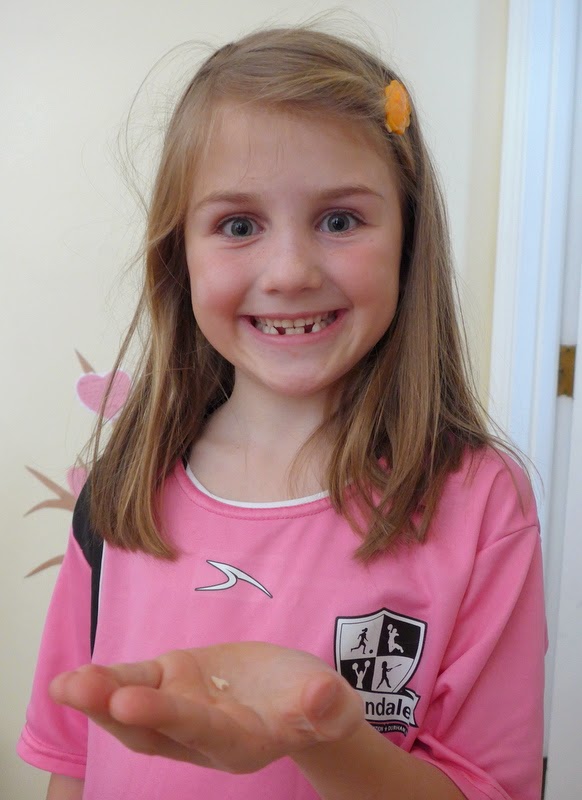 There goes tooth number four! Now she looks like a sad, sad version of a vampire. Rather than two long fangs in her top jaw, she's got two gaps in her bottom jaw.

Benjamin, of course, got out of bed to see what was the matter, and made me check his teeth. He's very worried about everyone's teeth now. They shouldn't just fall out like that, should they? His were all firmly in place. Except for his two-year molars, which we still haven't seen. 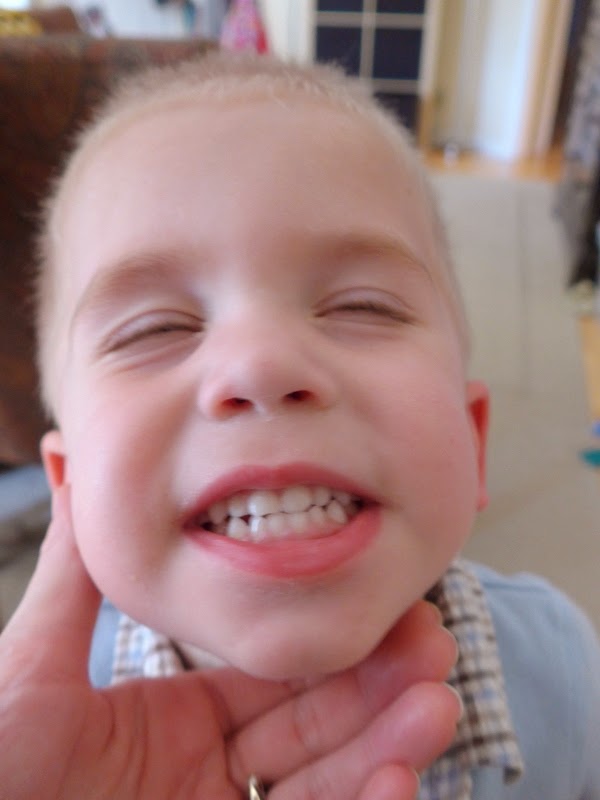 After nap time we went for a family walk. Benjamin wore a pair of 18 month shorts and they kept falling down. Usually he'd hike them up before they got too far down, but once they slipped right down to his ankles. Good thing the little guy knows no shame.

We had dinner on the back deck as well. Andrew made it without my having to lift a finger because it's International Women's Day (and because he usually cooks dinner on the weekends). 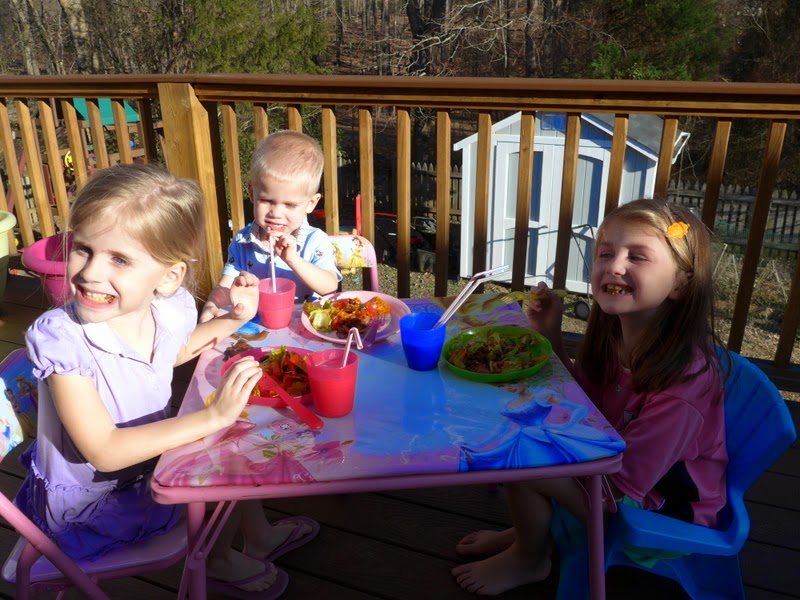 Andrew made a smoothie to go with dinner so that Rachel could take full advantage of her gappy smile—he gave her two straws! 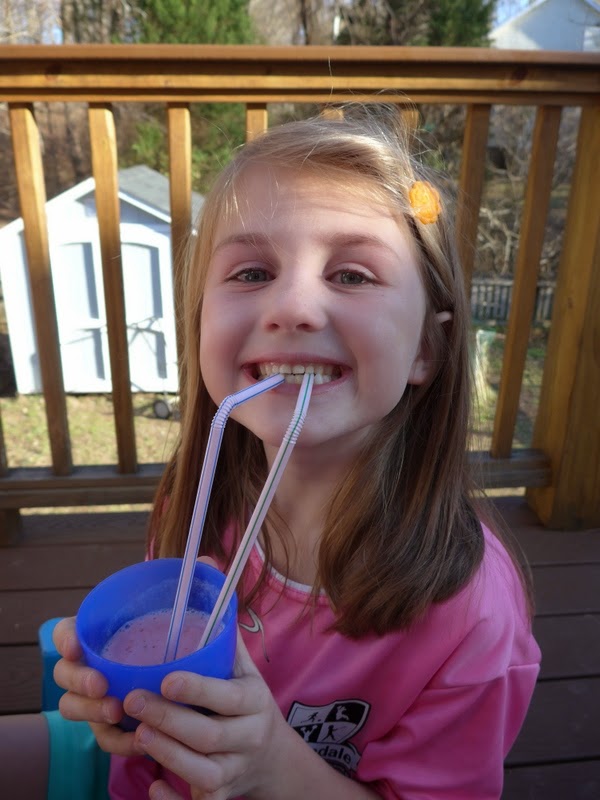 I enjoy eating outside before all the bugs come out. One of my favourite reasons for enjoying eating outside is that when someone drops a cup of smoothie (it was Andrew of all people) it gets all over the deck instead of all over my kitchen floor. The deck is much easier to clean, perhaps because my standards for cleanliness are a lot more relaxed for the deck than they are for the kitchen floor (besides we're due for several consecutive days of rain this week so even if we didn't do a perfect job it doesn't matter).

Hopefully we'll get something planted in our garden this week. We did a bunch of yard work on Saturday—and by we I mean I gave the girls some hoes and told them to clear out the side flower bed. I wasn't expecting much from them but they did an awesome job. Now I just need to have Andrew turn the dirt a bit and we can poke some seeds into the ground (a job I can probably help with).
Posted by Nancy at 9:11 PM