We took the kids to the store today and it was such a momentous occasion that Rachel actually prayed to thank Heavenly Father that "we were able to go to the store and buy things." Apparently we haven't taken them shopping since before Christmas. Because shopping is the worst.

But Target sent me a coupon for a $20 gift card if I'd make a baby registry with them. So I made the registry just to get the gift card. Their ploy worked, I guess, because we ended up spending more than $20, of course.

We picked out a couple of outfits for Zoë and found some Easter-y things for next month (so we don't have to go shopping for that later), including matching dresses for the girls that were super on sale (seriously—sometimes Target has amazing sales, but only sometimes; other times I'm like, "Uh, twenty cents off isn't a sale price...but thanks for putting it on the clearance rack anyway.").

It was pretty late by the time we were heading home and even later after we'd gotten all ready for bed. When we pulled into the driveway Andrew said, "Remember what we're doing as soon as we get into the house? Pyjamas, teeth, bed."

"And stories!" Benjamin said. "Me can't go bed 'out stories!"

"And a story," Andrew added.

"And a drink. You're going to go through every little detail of your bedtime routine now, aren't you?"

Because it was so late Rachel didn't fully participate in story time; instead she perched on the arm of the couch while reading her own book...and listening. I completely sympathized with her. It's so hard to choose between personal reading time and story time with Mom. I hated growing out of the story time phase. Fortunately for me, my little sister is nine years younger than me so I was able to passively listen in for a long time.

Both Miriam and Benjamin were smooshing their little faces against my shoulders and it was breaking my heart to think about our family dynamics changing again.

Have I mentioned yet that I've been uber emotional this pregnancy?

Shopping was exciting. Everyone was looking at tiny little outfits and saying which ones they liked best. We found a book in the dollar section called Zoe's First Book of Seasons and...got it. (Zoë will love that she shares a name with a character on Sesame Street for at least the first few years of her life, I'm sure).

This picture is from July 30, 2012, but it's basically how story time has gone for nearly three years now: 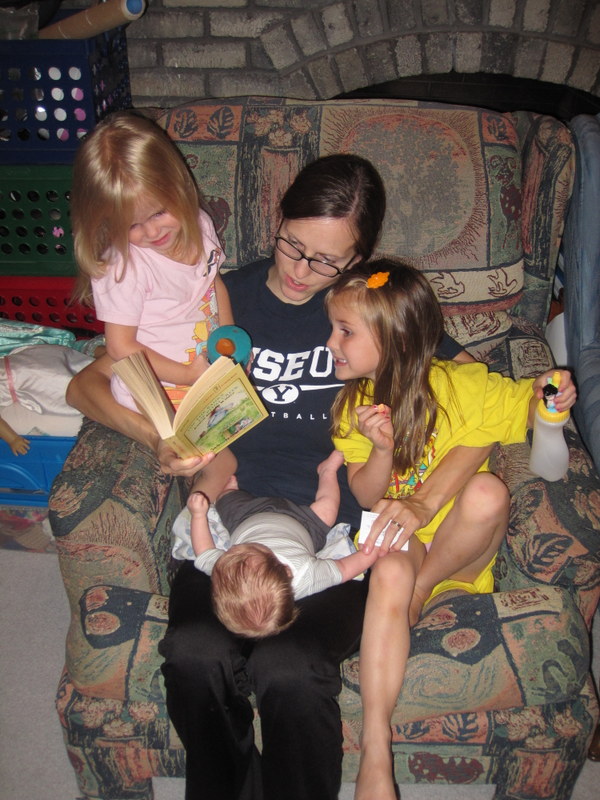 Benjamin on my lap, and a girl on either side of me.


In recent history, as things have been getting lumpier and my lap has been shrinking, Benjamin has started sitting beside me with Rachel beside him (when she chooses to sit through story time, which she usually does). Benjamin, you see, is terrified of being kicked by Zoë. He's absolutely freaked out by the idea and can only cuddle on my lap for so long before he has to get off because Mommy's tummy should not be doing that to him!

So, I don't know. Perhaps Zoë won't throw things off as much as I thought, since Rachel's already distancing herself from story time and Benjamin's already giving up my lap. Still, as I was sitting there with those two sweet little faces leaning into me I couldn't help but start to feel a little emotional. So I asked Rachel to grab the camera and snap a picture of us. 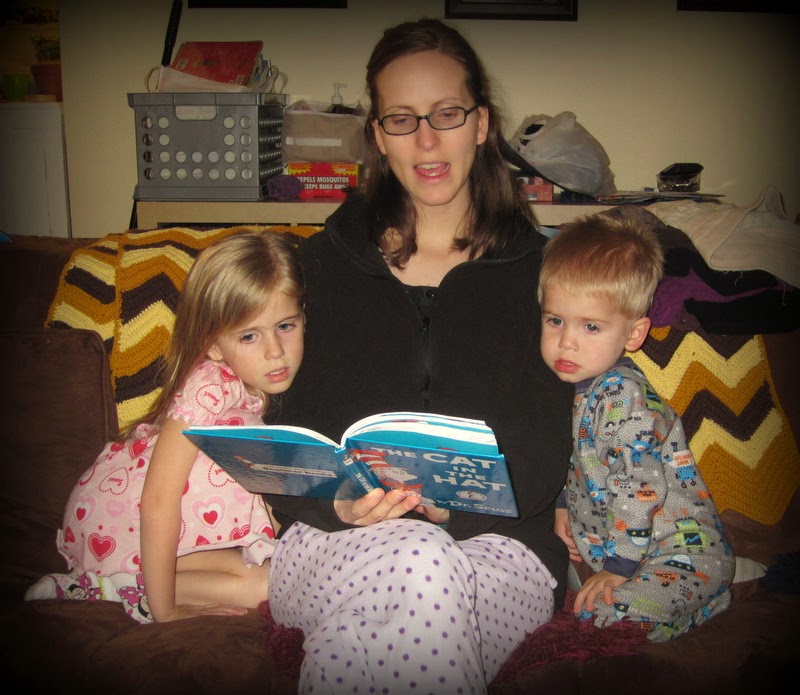 Here's Benjamin pointing out something interesting: 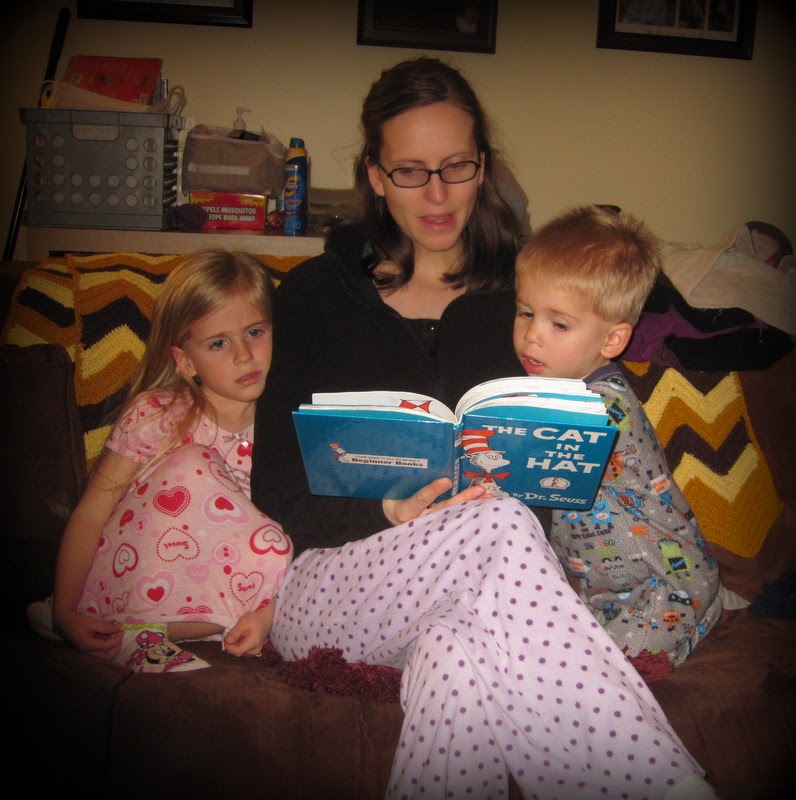 In other Benjamin news, I realized that he is, in fact, almost three years old. He's been asking for a while to go potty by himself and has been begging for us to get the little yellow potty down from the attic. That little yellow potty works great...for girls. It hasn't really worked for our little boy, even though it has a, uh, splash guard in front. I don't know what the deal was but it was too frustrating of a problem to work out so rather than have him pee on the floor every single time he went potty we just put it up in the attic for later and have been helping him get on the big potty.

But he's a pretty agile little guy by now. He can manage himself on the playground like a champ—ladders are a breeze for him—so I figured he could probably handle himself on the toilet, too.

I don't know why it took me so long to think of this. I guess yesterday when I realized that he's basically the same age Miriam was when we moved here it hit me that he's probably also capable of using the toilet by himself. Miriam'd been using the little yellow potty up until the day we packed up the moving van (it was in the very last box we packed). We never gave it back to her. Instead we showed her the stool.

Today I told Benjamin that he could go potty by himself if he wanted to—and he did. So I flipped on the bathroom light and watched him get to work. He pulled off his pants, moved the stool to the toilet, climbed right on up and took care of business.

I have a feeling this is going to (eventually, once he's trustworthy in the bathroom) make things easier around here. Growing up changes in story time might make me feel weepy, it's true, but changes in diapers/potty training? I don't think those changes ever will.

(Except perhaps when I fold up the newborn cloth diapers and put them away—that's the one exception because that newborn stage goes by so fast, but putting away the big baby diapers? That is a happy dance day.)
Posted by Nancy at 10:55 PM