Well, I finally got the test results for my three-hour glucose tolerance test and, like I knew I would, I failed spectacularly. My fasting numbers were too low and my 1, 2, and 3 hour levels were too high. Yes, all of them.

I have another check up tomorrow, so I'm sure I'll get to learn more then. I already have a prescription for a glucometer, test strips, and lancets. Yippee. My favourite.

It's a good thing I wasn't checking my numbers today because I'm sure they'd be all wonky. Andrew—of all people—developed a sort of stomach bug. Usually it's the kids who get sick first and then the parents inevitably get it later. This time Andrew was the first to go down.

I started feeling queasy last night and although I haven't thrown up I haven't felt great all day. Andrew gave me instructions to let the kids watch Netflix all day long. So I did. And I only felt slightly guilty in the few minutes I managed to stay awake between 7:30 AM and 2:00 PM. Who knew it was even possible to sleep that long after sleeping at night?

Then when I finally ate something I ate a hefty meal of...chicken broth. Miriam made cheese and crackers for herself and Benjamin because she was my "super duper helper" today, which basically meant she was in charge of changing shows on Netflix and opening packages of fruit snacks.

Benjamin fell asleep on the couch this afternoon and when he woke up it took him a long time to perk up. Here he is lying on the floor, telling me that his "all me" hurts: 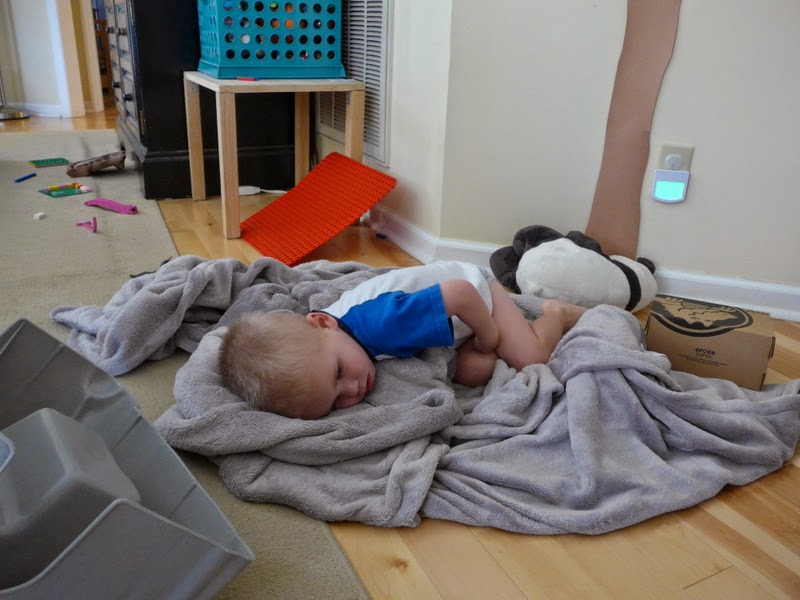 It's possible he'll be the next to come down with whatever this is (because my "all me" certainly hurt today) though I'm sincerely hoping that the only person who responds to this bug with vomit is Andrew.

Now even though I still don't feel great, I'm going to do some yoga with the kids...because that cereal I had for dinner probably needs to be worked through my blood stream a bit more efficiently than my body is able to do on its own.

You should have heard the cheers when I announced cereal was on the menu for dinner.